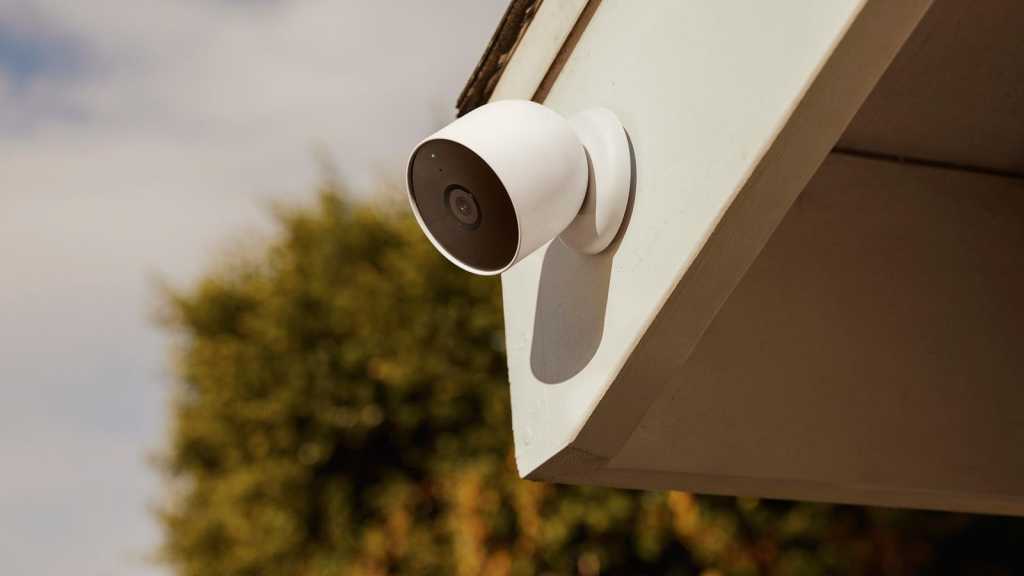 Back at the start of the year Google promised that new security cameras would be launched in 2021 and, after staying silent since then, it has now announced the range.

Rumours of a battery-powered camera were spot on: the Nest Cam Battery can run without wires, but you can also run it on mains power if you prefer. And you can use it indoors or outdoors. There’s also two main-powered models coming soon: a new floodlight model and the second-generation Nest Cam, which is for indoor use.

The Nest Cam Battery costs the same as the brand new Doorbell at £179.99 / $179.99, and is available to pre-order straight away from Google.

It will go on sale on 24 August from Google as well as retailers including John Lewis, Argos and Currys in the UK.

If you want to install it outdoors and run it off the mains, the optional weatherproof cables come in two different lengths: 5m (£29.99) and 10m (£34.99).  This was a bugbear of the original Nest Cam Outdoor whose cable was far too long for many people.

The Nest Cam (second-gen) is the most affordable security camera from the company yet at £89.99 / US$99.99. It’ll be available before the end of the year.

As it’s IP54 water resistant, you can use the Nest Cam Battery indoors or outdoors. Its magnetic mount has been tested to withstand hurricane-force winds.

Like the rest of the range, the Nest Cam Battery is ‘intelligent’ and can recognise people, animals and vehicles. This means you can get alerts for these things without needing a Nest Aware subscription.

Plus, thanks to some on-board storage, it will also give you three hours of history out of the box. That doesn’t sound like much, but as it will only record when meaningful motion is detected, it could be a week or even two before that storage is full and old clips start to get overwritten.

The camera records 1080p video in HDR. Google hasn’t said if it uses a 4K sensor like the Nest Cam IQ, but at this lower price and with the battery-powered option, it seems unlikely. There’s definitely no built-in Google Assistant.

When run on battery power, the camera can only do ‘event-based recording’ and to get continuous recording you’ll need a Nest Aware Plus subscription and to power the Cam from the mains.

Thanks to the more powerful chip, activity zones can be set up without Nest Aware and because it’s able to process what it sees without relying on the cloud, you’ll get notifications faster and there’s better security and privacy.

All the new cameras work with the Google Home app and you can also view their video feeds on a Nest smart display.

A built-in speaker and microphone allow two-way talk and, again, you can do this via the app or a Nest Hub.

When using the wall mount, the cable tucks behind it for a neater look. Obviously, when battery powered there’s no cable: Google says battery life will depend upon how many events it has to record, but with an average of 8-10 events per day, it should last for three months before needing a recharge.

Nest is trying to do its bit for the environment by making the camera from 47% recycled materials.

Google wouldn’t give us permission to use the images of the device in this article, but suffice to say that the Floodlight looks much like rivals, with two circular LED lights either side of a camera.

Aside from the price and the fact that Google says it has been designed from the ground up and lights up when meaningful activity is detected, nothing else has yet revealed about it. It’s certainly a lot more expensive than even Ring’s latest Floodlight Cam Wired Plus.

It shares the same intelligent features as the Battery, meaning it can tell you if an animal, person or vehicle has been spotted, all without the Aware subscription.

At under £100 / $100, the Nest Cam 2 is a cheaper indoor, wired camera that’s officially called the second-generation Nest Cam. It looks nothing like the original (below) which was effectively originally a Dropcam.

Instead, it has a similar design to the new Battery model, and is the most affordable security camera from the company yet.

It, too, gets the on-board intelligence and storage, so will continue to capture events even if your Wi-Fi goes down.

Note that if you own an older model, it won’t get the intelligence and local storage in any future software updates as these require the necessary hardware that the new range possesses.

If you need to buy something now and don’t want to wait for Google to launch the new models, here are the best security cameras.

Google also has another big launch coming this year: the Pixel 6.