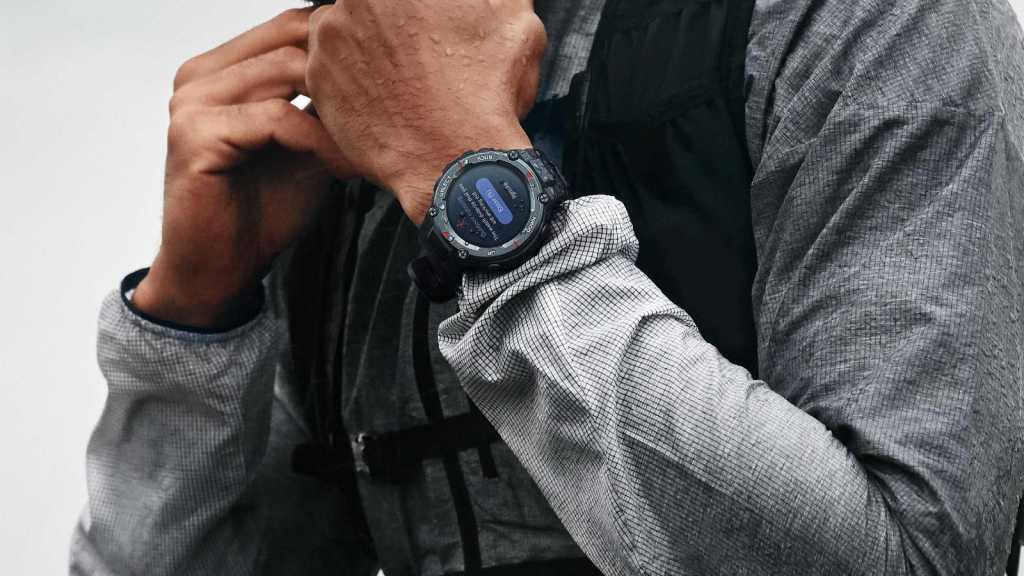 Amazfit is on something of a charge, with several activity trackers and smartwatches already available and impressing. We’ve already seen the recent arrival of the Amazfit Band 5, GTS 2 Mini and T-Rex – and now we have an upgraded version of the latter on the way.

The Amazfit T-Rex Pro features over 100 exercise modes, 15 military certificates, an IPX8 rating and more sensors. Keep on reading to find out more.

Where to buy the Amazfit T-Rex Pro

The Amazfit T-Rex Pro is available now in the UK, US, Italy, Spain, France, Germany and Thailand.

How much does the Amazfit T-Rex Pro cost?

However, for the slight jump up in price you get over 84 more exercise modes, two more military grade certificates and brand new sensors including a barometric altimeter.

What features are on the Amazfit T-Rex Pro?

When it comes to design, the Amazfit T-Rex Pro will stick with the 1.3in AMOLED display with a 360 x 360 resolution and Corning Gorilla glass. There are no changes to the 47.7mm x 47.7mm x 13.5mm polycarbonate chassis dimensions, so if you liked how the Amazfit T-Rex was put together, you’ll find its successor just as appealing.

The display is paired with a rugged, two-tone silicone strap. There are different colour options for the Pro, with the Rock Black, Gun Grey, Khaki, Camo Green and Army Green of the original being replaced by a simpler Black, Green and Grey selection.

One upgrade is the waterproofing, with the 5ATM (50 metres) of the T-Rex doubling to 10ATM (100 metres) on the Pro. Combined with shock resistance and an IPX8 rating, this watch can work in extreme weather conditions, including ultra-dry deserts, humid rainforests and mountains.

Amazfit will also use the second generation of the Biotracker PPG Bio-optical sensor for heart-rate monitoring, plus add GPS+BeiDuo and GPS+Galileo capabilities to the existing GPS+GLONASS for worldwide navigation.

There are a couple of new sensors too, in the form of a 3-axis gyroscope and barometric altimeter for measuring the height you’ve climbed when hiking. This watch is also capable of taking SpO2 readings – though this data isn’t backed by any accredited medical body.

This watch also tracks over 100 different exercise modes, including hiking, skiing, snowboarding, kayaking, and more common sports such as running, swimming and cycling. The brand new ‘ExerSense’ feature allegedly can also recognise when a user is doing one of eight core exercise modes and record the data automatically.

Whilst the watch boasts the same 390mAh battery as the T-Rex, the average life is two days shorter than its predecessor at 18-days typical usage. If used heavily, this drops to nine days, but if you just use the GPS then it can last up to 40 days. The watch also features Bluetooth 5.0/BLE, 3-axis acceleration, geomagnetic and ambient light sensors.

Like other wearables from Amazfit, this watch connects with the Zepp app. Once you’ve paired it with your phone, you can use it to get all your exercise logs, as well as sleep tracking data, control music playback from your phone, set alarms and events, access weather tracking and receive notifications from your smartphone. However, there is no voice support via Amazon Alexa as there has been on other smartwatches from the brand.