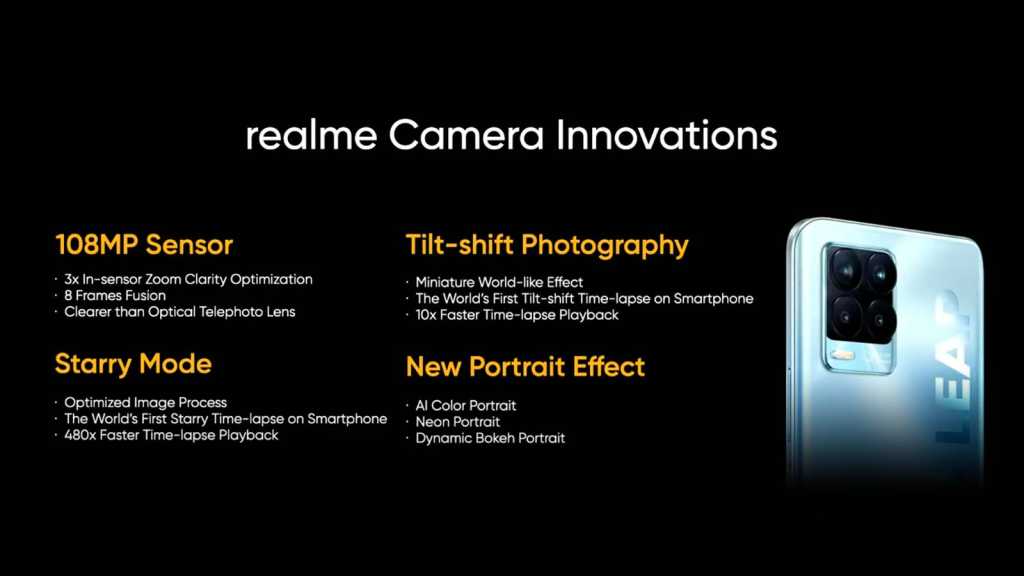 Realme’s camera innovation event saw the unveiling of the new Realme 8 Pro – the first entry in the Realme 8 line and the first of the company’s phones to tote a 108Mp primary camera.

The company didn’t spill the tea on every facet of the 8 Pro’s hardware and feature set (that seems destined for a second streamed event in the near future), instead choosing to focus on that headline-grabbing camera hardware and the new functionality it brings to the table.

The 8 Pro is fronted by Samsung’s ISOCELL HM2 sensor – a 1/1.52in 108Mp unit that employs a wealth of technologies, including pixel-binning (condensing the image data from nine pixels into one for a higher-quality final 12Mp shot), Smart-ISO (automatic ISO adjustment for minimal noise) and more.

Realme introduced its first phone with a 64Mp sensor back in 2019 and has pushed high-resolution sensors and quad-camera setups on the majority of its devices since then. The move to a 108Mp sensor sounds like an even better fit for Realme users, which according to the company have a proclivity for pinching and cropping in on their shots more so than the average mobile snapper.

While there’s no periscopic zoom setup, Realme’s confident that the phone’s 3x ‘in-sensor zoom’ (digital zoom that relies on what Realme has dubbed its ‘clarity enhancement algorithm’), is capable of taking “better than some optical telephoto lenses in some instances.” And in the case of the samples during the presentation, the feature holds promise.

Technologies like Starry Night – introduced on 2020’s Realme X3 SuperZoom – reach version 2.0 on the 8 Pro. The biggest improvement is the addition of starry time-lapse video, which captures a frame every 16 seconds and then compiles them all into 30fps footage of the stars moving across the night sky.

Tilt-shift still and video capture also joins the fray, allowing for a new creative perspective on scenes – letting the user change the shape and gradient of the bokeh effect at capture.

Beyond the tentpole aspects of the new camera system, Realme left the rest of the 8 Pro picture blank for the time being. Now we have to wait for a second event that brings the phone to market formally, where we’ll learn about the rest of the hardware it sports, along with pricing and release info.