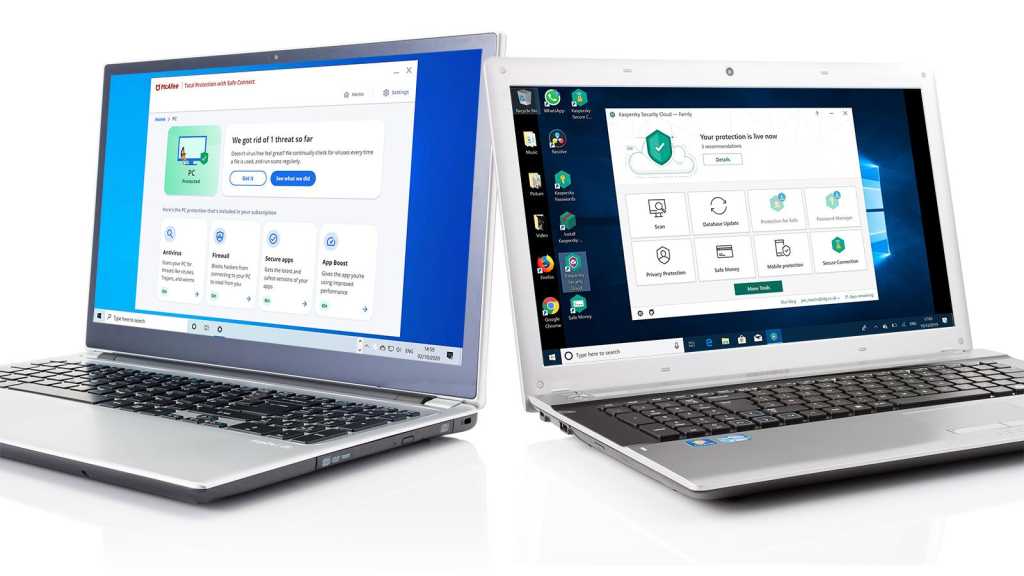 Choosing which antivirus to buy is a harder decision than ever before as these ‘mega-suites’ come with so many features now.

Here we’ll give you a quick overview of the differences between McAfee and Kaspersky’s offerings, how much they cost and the effectiveness of the protection they offer.

We’re looking at the latest versions of McAfee’s Total Protection and Kaspersky’s Security Cloud, which is much like Total Security but adds a few extra features.

If you’re short of time, you can use the table below to see at a glance what each suite has and doesn’t have. On the other hand, if you’re just interested in basic antivirus, they’re both as good as each other. The difference is that Kaspersky offers a completely free version of Security Cloud whereas McAfee doesn’t.

Overall, Kaspersky pips McAfee to the post thanks to lower subscription costs after the initial discount. It’s not a clean sweep on price though – McAfee is cheaper to cover 10 devices.

They’re both good choices, and you may feel McAfee is best for you if you have lots of devices to protect and will regularly use the VPN service.

There’s really nothing to choose between the two here: both scored an unbeatable 100% in AV-Test’s latest report.

This isn’t a cast-iron guarantee that they’ll protect your devices from every virus and threat during your subscription, but these aren’t one-offs: look back over the last year and they’ve both received top marks consistently.

One of the newest security services is ID protection. They monitor your email addresses and other details, sending you an alert if they’re ever found on the dark web or in hacked lists available to anyone on the normal internet.

Such services vary wildly in what they’ll do for you. The problem with Kaspersky’s is that is only checks public databases which you could do yourself. However, it does check email addresses that you enter when logging into websites, so there is a little convenience compared to you doing it all yourself.

McAfee’s service isn’t even available in the UK. It is in the US, though and is called ID Theft Protection. Even then, it’s only on the 5- and 10-device versions and only if you have auto-renewal enabled.

If you meet those criteria, then you can register your details, including social security number, and get alerts as well as a24/7 access to dedicated ‘identity agents’.

Most security suites include some kind of parental controls, McAfee and Kaspersky included. McAfee’s Safe Family is a separate app – you’re simply getting access to this by virtue of paying for a Total Security subscription.

It works on Windows, Android and iOS only: no support for Mac, Amazon Fire tablets or Chromebooks.

Its capabilities are reasonable: it will filter web content (but not if the child installs a web browser such as Brave) and you can set custom times when kids can use their devices, as well as block specific apps and set time limits per app.

Both McAfee and Kaspersky will let you track the location of your kids and set up defined places, and receive alerts when they leave and arrive. Kids can message parents asking for extra time, or to unblock apps.

Everything has to be managed from the McAfee Parent app – there’s no online portal.

Savvy kids can just uninstall Safe Family on Windows and iOS, as there’s no mechanism to stop them.

Kaspersky’s offering is better, though is only included with the 10-device Family subscription. It’s called Safe Kids, and has the core features you’d expect: good content filtering and app blocking, as well as allowing you to enforce a screen time limit across all the devices a child might have access to.

But you can’t set a time limit as well as a schedule for when kids can use those devices: it’s one or the other. Neither system is as good as Qustodio (which isn’t perfect, but is still one of the best out there).

It’s worth reading our reviews of McAfee Total Protection and Kaspersky Security Cloud for a more in-depth look at each, but overall, Kaspersky works out better value if you plan to stay subscribed: it’s noticeably cheaper than McAfee for five devices.

If you have loads, then McAfee is cheaper for 10 devices and remember that there’s no limit to the data you can use with the integrated VPN. Kaspersky’s VPN is more limited than some free VPN services, so this isn’t a worthwhile inclusion at all.