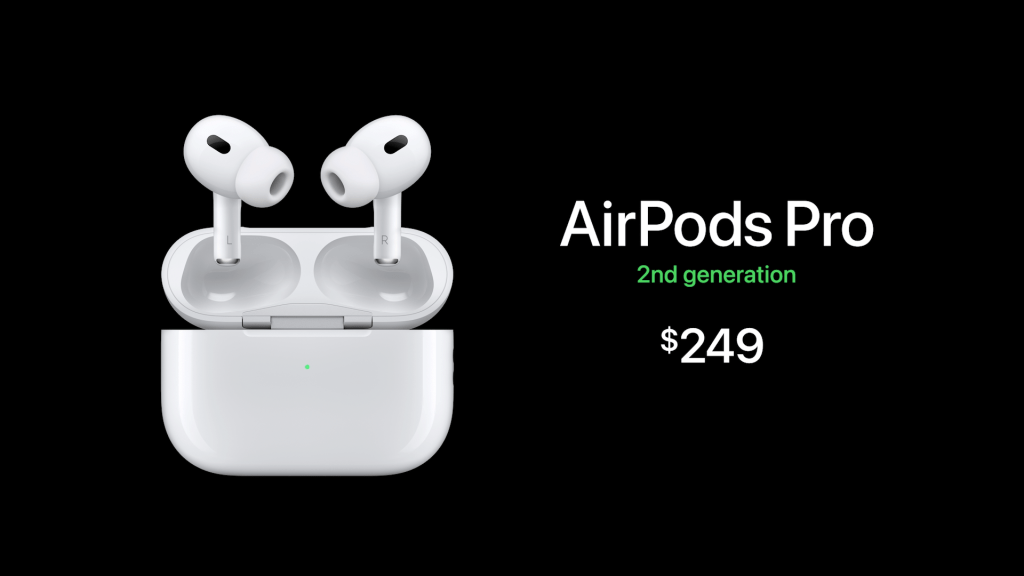 As expected, Apple has announced the AirPods Pro 2 at its big September launch event, with the release following on 23 September. The wireless earbuds arrive with upgrades, but notably, they still cost the same as the original model.

That’s right. In classic Apple style, the new AirPods Pro generation for 2022 arrives at $249 and yet offers things like double the active noise cancelling performance, better battery life, and case improvements such as a built-in speaker.

Of course, Apple unveiled other devices at the event including the iPhone 14 and 14 Pro smartphones, Apple Watch Series 8 and Apple Watch Ultra, and we cover those in more detail separately.

Here’s all you need to know about Apple’s latest high-end wireless earbuds, the AirPods Pro 2.

When were the AirPods Pro 2 released?

The AirPods Pro 2 are now available to buy following release on 23 September 2022.

How much do the AirPods Pro 2 cost?

As Apple often does, the new AirPods Pro 2 arrive at the same price as the original AirPods Pro. That means they cost $249, including free engraving.

Find out where to buy the AirPods Pro 2.

What are the AirPods Pro 2 specs and new features?

As you would expect from Apple, there is a range of upgrades for the AirPods Pro 2. Although, various rumours did not come true including an overhauled design with no stems, along with things like heart rate and temperature sensors.

What you do get centres around the new H2 chip which arrives with high bandwidth connectivity. One of the biggest upgrades here is vastly improved active noise cancelling (ANC) as the AirPods Pro 2 can handle 48,000 processes per second to analyse the sound around you in real time.

The long and short of it is that the AirPods Pro 2 gets up to two times the ANC performance compared to the original model.

They will also last longer with six hours from the earbuds – that’s 33% better – and 30 hours total when you include the charging case. That’s an overall improvement of six hours, ie a full charge of the new earbuds.

Speaking of the case, the case can now speak – well, sort of. There’s now a built-in speaker to help you find it when it’s lost as well as notify you of things like charging status. If you can’t hear the speaker, the earbuds can be used to find the case with precise location – like AirTags. Precision Finding requires a U1-enabled iPhone (that’s iPhone 11 or later).

There’s also an optional lanyard attachment for the case so you might never need to use the location feature in the first place. Perhaps a bigger upgrade to the case is that you can now top it up with an Apple Watch charger.

The AirPods 2 Pro might not have a design revamp but there are new elements starting with a capacitive touch control meaning you can swipe up and down to adjust volume. There are also new XS (extra small) ear tips for those, like me, with tiny ear canals.

Elsewhere, the new Apple wireless earbuds get a ‘low distortion’ driver which is powered by a custom amplifier. Apple’s visual specs graphic doesn’t mention anything about an upgrade to sound quality such as lossless audio so it looks like the same old AAC codec remains.

Combined with a TrueDepth camera on an iPhone running iOS 16, you can scan your ears to create a personal profile for Spatial Audio. Note that the personalised audio feature is not exclusive to the AirPods Pro 2.

Keeping up with Apple’s eco-credentials, the earbuds feature things like 100% recycled aluminium on the case hinge, along with the same figure for rare earth elements in all magnets and both tin and gold in the circuitry.

There are also recycled plastics in multiple parts and no plastic wrap on the box.