The announcement of new laptop CPUs from AMD and new laptop GPUs from Nvidia at CES 2021 means that practically every big laptop manufacturer is launching new powerful laptops, and of course, MSI wanted to get in on the action.

But with so many powerful laptops on the market, the manufacturer needed a way to differentiate itself from the ray-traced noise, and what better way to do than to create the thinnest 17in gaming laptop available right now?

The updated MSI Stealth 15M, revealed at CES 2021, boasts a thickness of just 16mm, just shy of a full millimetre off the updated Razer Blade Pro 17. It’s not just 17in gaming laptop that it bests either – it can even take on smaller non-gaming laptops. In fact, it’s both thinner and lighter than Dell’s 18.03mm, 1.81kg XPS 15, weighing in at a rather svelte 1.68kg thanks in part to an all-aluminium body.

You’ll find a 17in Full HD display that offers a buttery smooth 144Hz refresh rate, but unlike most other gaming laptops, you can’t switch this out for either a higher resolution or faster display – it’s the same across the board.

The thin nature of the laptop doesn’t mean MSI has skimped on connectivity; you’ll find plenty of ports including two full-size USB-A 3.2 ports, two USB-C ports (including one with Thunderbolt 3 support), a headphone jack, full-size HDMI port and a microSD card reader too.

You’ll also find support for Wi-Fi 6E, offering the ability to connect to the internet via the 6GHz spectrum in addition to the standard 2.4GHz and 5GHz spectrums. Though support at a router level is rare right now, it’s a great futureproofing option that MSI claims can provide much faster wireless download speeds than currently possible. 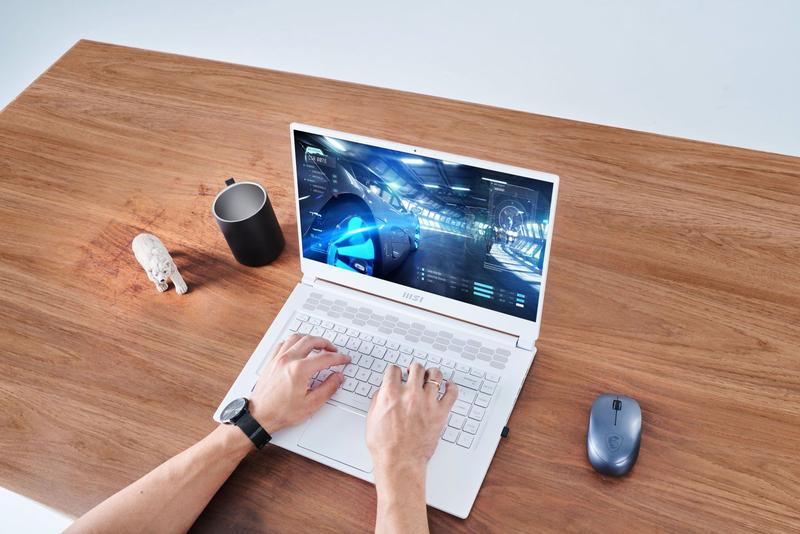 There are also the smaller enhancements on offer, like the inclusion of a 1080p webcam. Webcams are often overlooked in the gaming laptop market, including basic 720p webcams that generally look terrible, even on high-end machines, but they’ve become more important than ever in a world filled with remote meetings and Zoom calls, and it’s nice to see MSI taking that into consideration here.

There’s also features including Nahimic Audio support, a full RGB backlit keyboard and access to MSI Control Center to tweak the performance of the laptop on-the-go.

The best part is that all this comes to market at a much cheaper price point than many of its rivals, starting at around the $1,700 mark, with UK pricing yet to be confirmed.

That’s roughly in line with Razer’s new Blade 15, but MSI’s option comes with an updated, faster chipset – Razer’s new range still features older 10th-gen Intel chips and lacks support for Wi-Fi 6E, so there’s definitely value for money to be had here. The MSI Stealth 15M goes up for pre-order this week, with the laptop due to ship within the next few weeks.