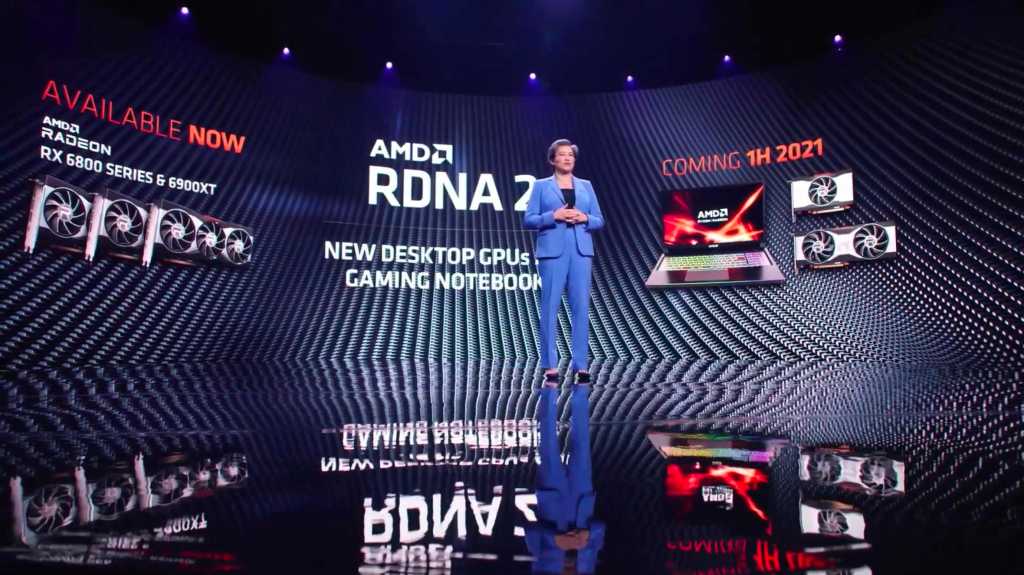 AMD CEO Lisa Su took to the virtual stage at CES today to reveal not only the company’s latest generation of laptop CPUs, but also to tease the upcoming release of AMD’s new mobile GPU range.

Though not given a name, the upcoming mobile GPU range is based on the powerful RDNA 2 architecture used not only in the RX 6000 Series on desktop PCs, but the custom GPUs in both the Xbox Series X and PS5 too.

With such great performance from the desktop GPUs, gamers are expecting great things from the mobile GPUs. While we weren’t treated to a whole host of information on the upcoming range, performance and a potential release window were teased.

Based on the RDNA 2 architecture, the reference mobile GPU is capable of powering DiRT 5 at ultra-high settings and can produce 60+fps performance while running at 1440p. That’s an impressive feat, but it leaves us with more questions than answers.

The good news is that we should be hearing more about the upcoming AMD Radeon mobile GPU range relatively soon, with Lisa Su teasing that we’ll be seeing the GPUs included in gaming laptops coming out in the first half of 2021.

Mobile GPUs aside, it was very much a laptop-focused event, with AMD also announcing the mobile variant of its Ryzen 5000 Series for ultrathin laptops, providing not only improved performance compared to the Intel competition, but the ability to game at 1080p without any hint of stutter or lag. Those laptops should appear much sooner though – as soon as February, according to Su.