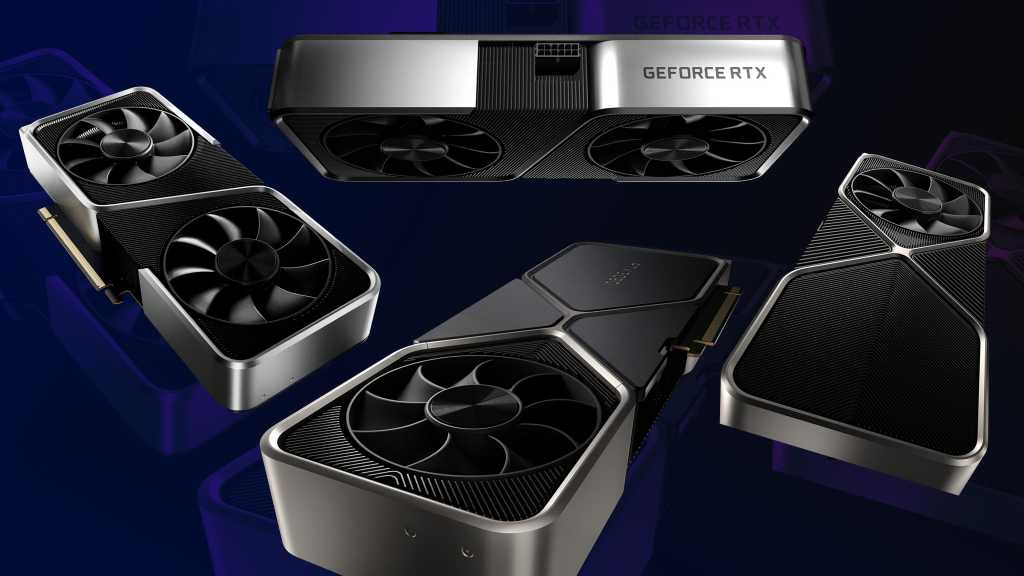 Upgrading your PC can be a fun and fulfilling experience, but let’s be honest, working out which components are best for your build can be tricky – especially if you haven’t upgraded for a while or ever before.

When it comes to graphics cards, your choice isn’t simply between Nvidia and AMD (a very real choice at the moment) but between the many graphics cards available from each. And things get even more complicated because lots of different manufacturers such as ASUS, Gigabyte, Zotac and others all sell multiple versions of each individual GPU model, plus overclocked versions.

But that’s where we come in. Here we’ll outline everything you need to know about Nvidia’s current graphics card range, and which could be best for your needs.  If you’re looking for information on AMD’s range, we cover the AMD RX 6000 Series separately.

What do you need a graphics card for?

Before you can decide which Nvidia graphics card is best for you, first establish what you’re going to use it for. The most obvious thing is of course gaming, but you might want to render video too.

If you’re a keen gamer, the resolution and desired framerate play a big part in deciding which graphics card to go for; if you use a 1080p display and are happy with 60fps, chances are you’ll be satisfied with the new entry-level RTX 3060. If you want to game at 4K or at higher frame rates, however, you’ll probably need to go for one of the more powerful models with more VRAM.

It’s a similar story with video editing; if you’re looking to edit video, the RTX 3060 or RTX 3060 Ti should suit most people. Both should be powerful enough to allow for multi-stream 4K editing without being overkill.

However, if you need to generate complex graphics or you work in 3D animation, you’ll benefit from one of the faster, more powerful variants of the 30 Series.

There’s also the available space inside your PC to consider; graphics cards are pretty big, and that’s especially true of the top-end RTX 3090. Whatever model you go for, take a look at the graphics cards dimensions and make sure they’re compatible with your machine.

Similarly, ensure that your PC’s power supply has the appropriate power connectors and is sufficiently, especially if you’re running a more basic PC and you’re looking to upgrade it for the first time. Nvidia recommends a 600W PSU at a minimum for the 3060 Ti and increases to 750W for the 3090, although this will depend on other components on your PC, so it’s worth taking the time to properly calculate your power demands and what your PSU offers.

Nvidia launched a new range of graphics cards in September 2020, and subsequent 30 Series cards have been appearing sporadically since. The GeForce RTX 30 Series is a significant upgrade on the 20 Series not only in sheer performance but design, cooling capabilities and AI smarts.

Generally speaking, the new graphics cards are twice as powerful as their previous-gen counterparts, offering even more bang for your buck and more reason to opt for one of these new cards instead of a 2060, 2070 or 2080.

That’s thanks not only to the improved architecture, but the combination of a second-gen AI core, RTX I/O to boost transfer speeds and remove the bottleneck of decompressing data, and the inclusion of faster GDDR6X memory.

GDDR6X offers twice the performance compared to standard GDDR6 RAM, and Nvidia claims that it’ll speed up game load times in titles that take advantage of the upgraded tech. It’s not clear how much benefit it’ll bring at this point, with no current games specifically taking advantage of the tech, but it could be comparable to the loading times we’re seeing on next-gen consoles like the PS5 and Xbox Series X.

There’s also a new cooling system in the 30 Series, featuring independent push and pull fans that draw cool air in from the bottom of the case and expel it near the top where most PC outlet fans are found. The fans are controlled independently and result in a 20°C drop in average GPU temperatures compared to the 20 Series, but despite the impressive power, the fans are three times quieter too.

The upgraded ‘AI’ of the RTX 30 Series improves elements like real-time ray tracing, but that’s not all. Nvidia has used this to create Nvidia Broadcast, software with AI-powered audio and video tools that lets you remove your video background without a green screen, reduce background noise on mic to an inaudible level without a downgrade in quality and much more.

It’s great not only for budding streamers but for those that frequently partake in video meetings and conferences.

Now, let’s drill down into what each 30 Series GPU offers.

The Nvidia GeForce RTX 3060 is the cheapest current-gen RTX card you can buy right now with an MSRP of just £299/$319/AUD$529, which may seem like a steal considering it has more VRAM than the slightly more expensive 3060 Ti, but not all is as it seems.

While there’s more VRAM on offer, there are fewer CUDA cores, Tensor cores and RT cores along with a narrower 192-bit memory, which translates to slower performance overall, making the RTX 3060 the ideal option for entry-level 1080p@60fps gamers – those targeting 1440p may struggle.

There’s also the mining limiter implemented on the 3060 to reduce its efficiency when crypto-mining, which may reduce the appeal for those looking to get into crypto, although a botched Nvidia driver release means there are ways to get around it. The 3060 is the only card to have the limiter right now, but Nvidia is looking to include it in future hardware too.

If that has piqued your interest, we outline where to buy the Nvidia RTX 3060 separately.

Next up is the RTX 3060 Ti, which offers quite a jump in performance despite the XX difference between the standard and Ti models.

It features the same 8GB of GDDR6X RAM as the RTX 3070 Series, and although it’s at a slower clock speed than its more expensive sibling, it offers more power than the previous-gen RTX 2080 Super – a graphics card that costs double that of the 3060 Ti.

It’s ideal for 1080p and 1440p gaming at a solid 60fps with ray-tracing and high-res textures, and that’s backed up by benchmarks from our sister site PCWorld, showcasing the true value of the new entry-level GPU.

If you’re interested, take a look at where to buy the Nvidia RTX 3060 Ti in the UK.

The RTX 3070 is a step up from the RTX 3060 Ti, offering the same 8GB of GDDR6X VRAM but at a higher clock speed, resulting in better performance.

Rather than beating the RTX 2080 Super like the entry-level model, Nvidia claims that it can actually best the previous top-end RTX 2080 Ti, a graphics card that cost over £1000/$1000.

The 3070 should be able to provide high frame rates at 1080p and 1440p without breaking a sweat, perfect for those with high refresh rate monitors. It can also run games at 4K, although benchmarks suggest it might not be able to hold a solid 60fps without the help of DLSS 2.0.

The RTX 3080 will be the go-to for many, offering great performance for gamers and creative professionals alike, although at £649/$699/AUD$1,139, it’s certainly not the cheapest tech on the market.

The reason for the price? There’s 10GB of GDDR6X VRAM under the hood as standard, which Nvidia claims is more than enough to power silky smooth 4K gameplay experiences at 60fps with full ray-tracing capabilities, making your games look better and run smoother than they’ve ever looked before.

Like the 3070, it’s much more powerful than the last-gen 2080 Ti, so you’re getting plenty of bang for your buck with the 3080, but make sure you’re getting the most out of the hardware – if you’ve not got a 4K display, for example, it’ll likely be a little too powerful for your requirements.

We cover the latest Nvidia RTX 3080 news separately for those interested.

The RTX 3090 is designed to replace the limited edition Titan in previous-gen graphics card lines, ideal for the most demanding creative professionals.

It offers an incredible 26GB of GDDR6X memory to play with, which is more than overkill for even the most dedicated gamer, but it’ll certainly be put to use by video editors and other creatives.

Nvidia says it’ll handle 8K@60fps gameplay with ease, but considering there aren’t many 8K monitors available at the moment, that shouldn’t be a primary reason to slam down an eye-watering £1,399/$1,499/AUD$2,249 for the GPU. It can handle 4K@120fps though, for those with a high-end monitor 4K 120Hz monitor.

It’s mainly aimed at creative professionals, and the price tag reflects this.

What’s the difference between Nvidia’s GPU and third-party options?

You might’ve noticed that while Nvidia sells its own line of graphics cards, third-party manufacturers like Asus and Gigabyte often release their own branded models of the same GPUs – what’s the difference?

The third-party manufacturers all get the GPUs from Nvidia, but in order to differentiate themselves from the standard offering, many will offer something unique. This could be in the form of overclocking, increasing performance of the card, or it could be a better cooling system to keep things running smooth even during demanding graphical work.

There are also LED-infused GPUs available from third-party manufacturers perfect for gamers, and some specialise in smaller GPUs for smaller PC cases – it all comes down to what you need from your graphics card.

Which Nvidia GPU is best for VR?

Generally speaking, the RTX 3070 should also be sufficient for playing VR titles using the likes of the Oculus Rift S and Reverb G2 at 90fps, a crucial element to ensure a smooth, immersive virtual experience, although you’d get a little more futureproofing by opting for the more powerful 3080.

After all, the 3070 may be sufficient for existing games, but as time goes on, games demand more graphical power – and that’s especially true of AAA VR titles that need to power not only a high resolution and frame rate but high-end textures and everything else that goes into powering your virtual experience.

Should I buy an older, more powerful GPU?

You might be faced with a great deal on an older, higher-tier GPU, and generally speaking, it is better to get a more powerful last-gen GPU than an entry-level current-gen GPU, but with such significant gains from the 30 Series, even the relatively cheap GPUs offer similar or improved performance compared to the most expensive RTX 20 Series cards.

If you can get your hands on it, the mid-range RTX 3070 offers better performance than most of the 20 Series collection. The problem is that there’s huge demand for Nvidia’s 30 Series GPUs right now, with most cards selling out within seconds of listings going live, so it might be difficult to get your hands on one without paying over the odds from a scalper.

It’s likely that stock will replenish over the coming months, but it’s tough to say when the cards will be readily available at retailers.

You don’t really have the 20 Series as a backup either – PC stockists like Scan and Overclockers UK currently only sell the top-end 2080Ti which, at well over £1000 in the UK, is far too expensive considering it’s bested by the mid-range 3070. It’s possible that other retailers will offer the older cards at a discount from time to time, so it’d be a good idea to check PC stockists from time to time and keep an eye on our roundup of the best PC deals too.