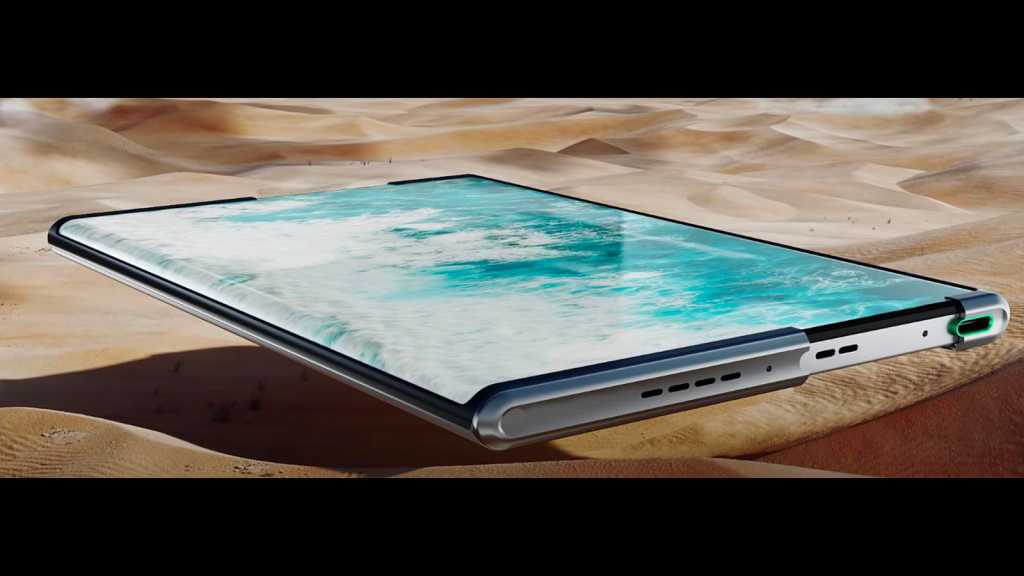 Samsung looks to have a scrolling phone in the works that could be in the market later this year.

The concept device that’s been spotted has led many to wonder whether its adaptable form could serve as a replacement for the company’s now-defunct Galaxy Note line and as an alternative form factor to the current Z Flip 3 and Z Fold 3.

Here’s what we know so far about what might be called the ‘Galaxy Z Roll’.

What features does the Galaxy Z Fold Scroll/Z Roll have?

Days later, on 17 November, Chinese rival Oppo unveiled a scrolling phone concept of its own as part of its annual Inno Day event, called the Oppo X 2021, which bore a resemblance to the unknown Samsung device.

Ice Universe then made the first mention of the ‘Galaxy Z Fold Scroll’ later that same day, with the name in reference to the phone’s rolling display, which is thought to expand and contract in and out of the phone’s body, much like Oppo’s concept.

Contrary to this, come 18 May 2021 LetsGoDigital unearthed a Class 9 trademark filing granted to Samsung Electronics by the EUIPO (European Union Intellectual Property Office) for something set to use the name ‘Z Roll’. The classification of goods that the trademark relates to is broad but includes electronic devices, such as mobile phones.

This isn’t the first we’ve heard of an expandable phone from Samsung (as first reported by Korean site ETNews), with a retractable concept device reportedly shown to a select few behind closed doors at 2020’s Consumer Electronics Show in Las Vegas.

Preceding that, in late 2018 Samsung had already registered a design patent (pictured) with the KIPO (Korean Intellectual Property Office) which was approved in May the following year and was made public on June 24, 2019 (again spotted by LetsGoDigital).

While it’s clear that Samsung has actually had a device like the Scroll/Z Roll on its roadmap for some time, little is currently known about what else beyond its signature expanding display the phone will likely offer.

That said, the physical concept, spotted by Ice Universe, appears to measure in at around the same size as the existing Galaxy Note 20 Ultra.

As an extension of the original KIPO listing, LetsGoDigital also spotted that in March 2020, Samsung had applied for a patent for a ‘dual slidable electronic device’, the documentation of which was released by WIPO (World Intellectual Property Office) in January 2021.

This newer patent details a device with a system of chain links and gears, along with a flexible display and flexible back that all allow the device to expand in width.

Based on the WIPO listing, Jermaine Smit (aka Concept Creator) created mock-up renders for LetsGoDigital that demonstrate what such a device might look like, with a design aesthetic seemingly lifted from the Samsung Galaxy S21 range.

Additional details include an increase in display size of about 30%, which paired with previous reports of a 6in display (when collapsed down), would equate to the device sporting an 8in display, when expanded.

As stated by The Elec, in an article published 28 January 2021, during Samsung Electronics’ fourth-quarter conference call, Samsung Display’s senior VP, Kwonyoung Choi confirmed that the company was developing new rollable and slideable displays set to release later in the year.

While Kwonyoung didn’t elaborate on the use-cases for such displays at the time or whether or not Samsung Mobile intended to employ them in upcoming devices, his statement added a little more legitimacy to every rumour surrounding the Galaxy Z Fold Scroll’s/Z Roll’s release, even if nothing is yet to hit the market.

Before moving onto the company’s large-display products (i.e. Quantum panels for TVs) he also made mention of plans for new small and mid-sized foldable displays. Assuming ‘small’ is in reference to smartphones, could ‘mid-sized’ be construed as alluding to a folding Galaxy Tab of some sort?

Fast-forward to May of last year and as part of the Display Week 2021 exhibition, SamMobile spotted that Samsung Display had a number of concepts to shout about; including a bi-folding OLED for mobile, a panel with a UPC (under-panel camera) at play on a laptop concept and, among others, a scrollable concept device (pictured above).

Not long afterwards, Samsung Display uploaded a promotional video (above), showcasing all of the key concepts it was showing off at Display Week 2021 in action, including the expanding device which will likely inform the Z Fold Scroll/Z Roll.

When is the Galaxy Z Fold Scroll/Z Roll available?

Ice Universe described the Z Scroll/Z Roll as a ‘laboratory test product’ but expected a release later in 2021, intended to compete with similar products from the likes of Oppo and Xiaomi.

While no such device ever emerged, a subsequent report from GalaxyClub in March 2022 makes reference to codenames for successors (expected in summer 2022) to the company’s existing Z Flip 3 and Z Fold 3 foldables (‘B4’ and ‘Q4’), along with an unknown device, codenamed ‘N4’, which could potentially be the long-rumoured rollable.

How much is the Galaxy Z Fold Scroll/Z Roll?

While it’s too early to expect leaks around pricing for a device like the Scroll/Z Roll, based on the fact that it looks set to be a member of Samsung’s Galaxy Z line, it’ll likely cost a pretty penny.

The most affordable member of the line – the Z Flip 3 – comes in at £949, while the priciest, in the Z Fold 3, costs from £1,599 in the UK. With the Scroll/Z Roll serving up first-generation technology, there’s a chance that it may cost as much, if not more than the Z Fold 3, especially as GalaxyClub’s sources suggest the N4 will only be released in limited numbers.

We also chat about the rumoured Z Fold Scroll (before we learnt of the Z Roll name) in an episode of our weekly YouTube podcast Fast Charge, so check it out and subscribe: