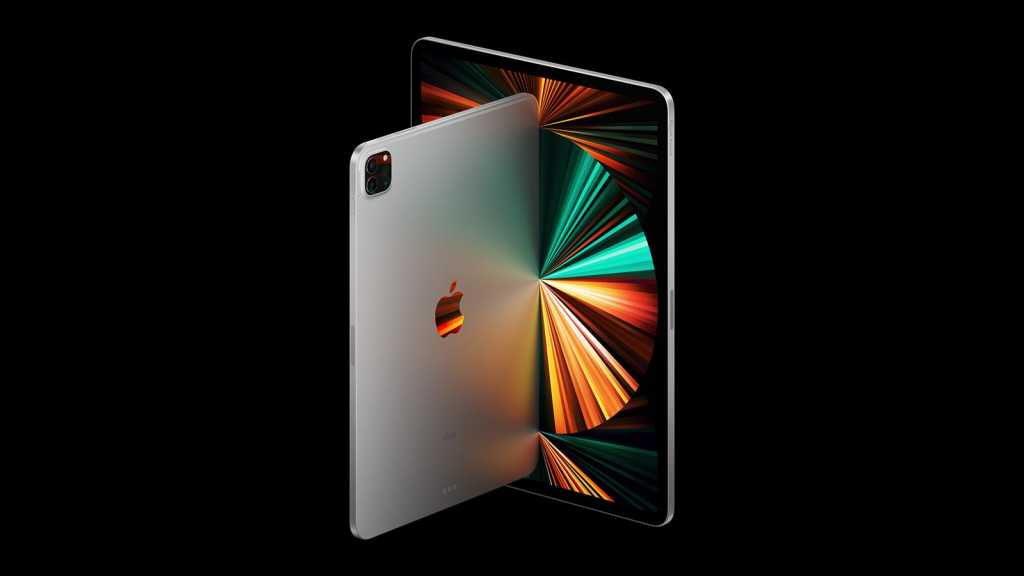 The iPad Pro has long the bar for tablets, boasting a high-end experience unique to Apple. And now it’s about to get even better, with updated 2021 models powered by the Apple M1 chip.

The new 11in and 12.9in M1 iPad Pros boast the same chipset as the company’s latest MacBooks and iMacs, along with other upgrades including 5G, Thunderbolt, and a Mini-LED display exclusive to the larger model.

Here’s everything there is to know about the M1 iPad Pro 2021 range, including the full specs, prices, and when you’ll be able to buy one.

Apple unveiled the two new iPad Pro models at its 20 April Spring Loaded event, but they’re not available to order just yet.

Pre-orders for both models will launch on Friday 30 April, with the tablets shipping in the second half of May, which is also when they’ll officially go on sale – we’re still waiting for a specific date, though leaker Jon Prosser suggests the iPad Pro 12.9in could ship on 21 May, followed by the 11in model a day later on 22 May. We’ll update this section once we get confirmation from Apple.

What will the M1 iPad Pros cost?

There’s good news and bad news when it comes to the iPad Pro pricing. The good news is that the 11in iPad Pro starts from the exact same price as its predecessor. The bad news is that the 12.9in model – with that new Mini-LED screen – has jumped by $100, and the top 2TB storage options for both sizes are expensive. 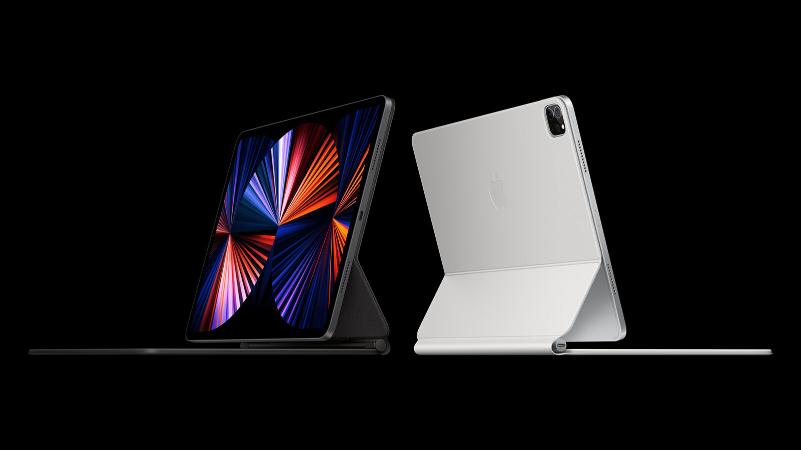 Here are the full prices for the UK and US:

If you want to get your hands on one, take a look at where to buy the M1 iPad Pro (2021) range, and to see how that compares to the rest of the iPad range as it stands, take a look at our selection of the best iPads.

What spec upgrades should I expect from the iPad Pro 2021?

With such a great experience on offer from the iPad Pro 2020 range, what should we expect from this year’s new models?

On the outside, not much has changed. The new iPad Pros come in the same sizes – 11in and 12.9in – and the same colours – silver and space grey. 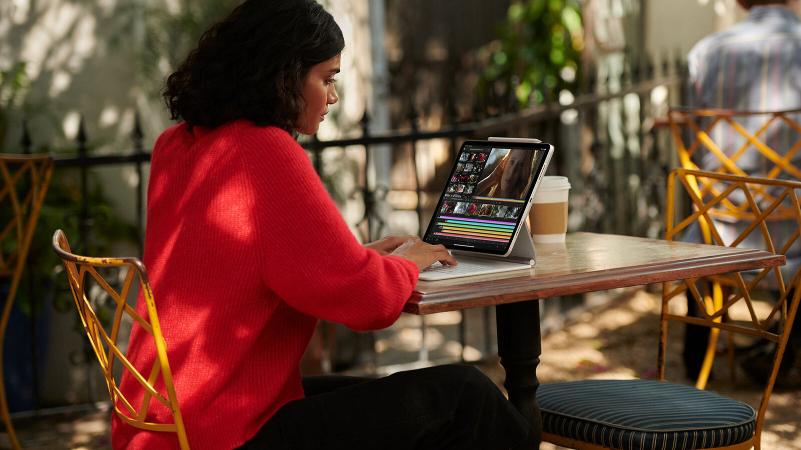 The 11in model is the exact same dimensions as its 2020 counterpart, though surprisingly comes in a few grams lighter. Meanwhile the 12.9in model is half a millimetre thicker than last year – though still undeniably slender at 6.4mm – and about 40g heavier, now clocking in around 680g.

Other than that, the design really hasn’t changed at all, though it does boast improved environmental credentials: a 100% recycled aluminium enclosure, and 100% recycled rare earth elements in the magnets of the speakers and enclosure.

The biggest surprise of Apple’s announcement was that the new iPad Pros will both be powered by the M1 chipset, rather than an upgraded version of the A14 Bionic chip found in the iPhone 12 range.

The M1, with an 8-core CPU and 8-core GPU, is the same chipset used in last year’s new MacBook Air and MacBook Pro, and also found in the new iMac models announced moments before the new iPad Pro. 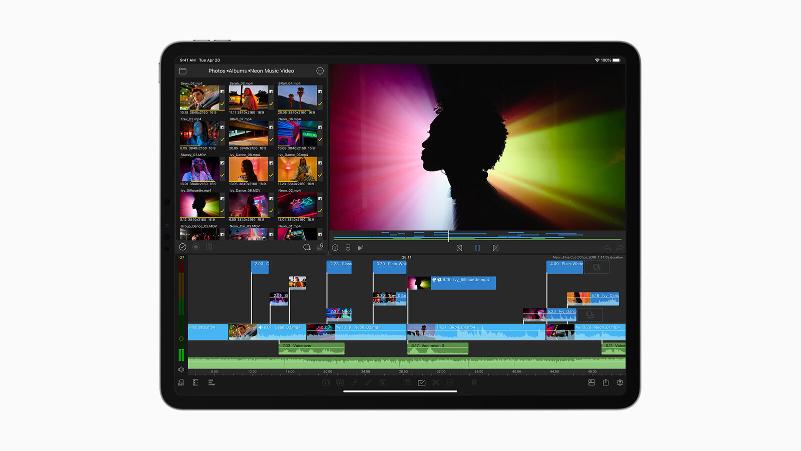 Apple says it delivers a 50% CPU boost and 40% GPU boost relative to last year’s models, and also dropped some astonishing comparisons to the first ever iPad, from way back in 2010: the latest iPad Pros have 75x faster CPU performance and 1,500x faster GPU performance than that first model.

The new chip is joined by up to 16GB RAM and 2x faster storage – now available in quantities ranging from 128GB all the way up to a new max of 2TB. The 1TB and 2TB models will feature 16GB RAM, with only 8GB included on the lower storage tiers.

The next biggest upgrade is to the display, but this one is exclusive to the 12.9in model – the 2021 11in iPad Pro packs the same Liquid Retina display as last year.

The larger 12.9in model now packs what Apple is calling a Liquid Retina XDR display, claiming that it matches the quality of the company’s standalone Pro Display XDR monitor. 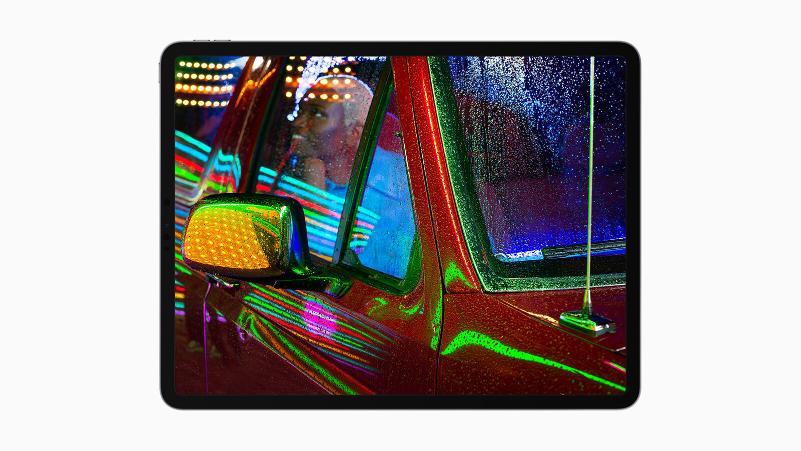 To achieve that Apple is using Mini-LED. As the name suggests, this uses smaller LEDs, with over 10,000 of them crammed into the 12.9in panel.

Advantages include localised dimming and a wider colour gamut compared to traditional OLED, delivering improved HDR. That also means improved brightness – up to 1,000 nits across the whole screen and up to 1,600 nits peak brightness – with a 1,000,000:1 contrast ratio.

The iPhone 12 range was the first in the Apple portfolio to offer 5G connectivity, so it’s no great surprise to see that it’s now spread to the iPad Pro 2021 range.

Like the iPhone 12, the new tablets will support sub-6GHz worldwide, with potential max speeds of 3.5Gbps. In the US it will also support mmWave, which has shorter range but can theoretically hit 4Gbps – though of course, real-world speeds are likely to be far lower most of the time.

eSIM support is included, and as before there are separate Wi-Fi-only models for those who don’t feel the need for 5G.

Wired connectivity has been given a little boost too. The USB-C port makes a return, but has been upgraded this time to support USB 4 and Thunderbolt.

That not only means faster transfer speeds, but crucially unlocks support for a wider range of external displays, docks, storage devices, and other peripherals, which should help the iPad Pro fit smoothly into more workflows. 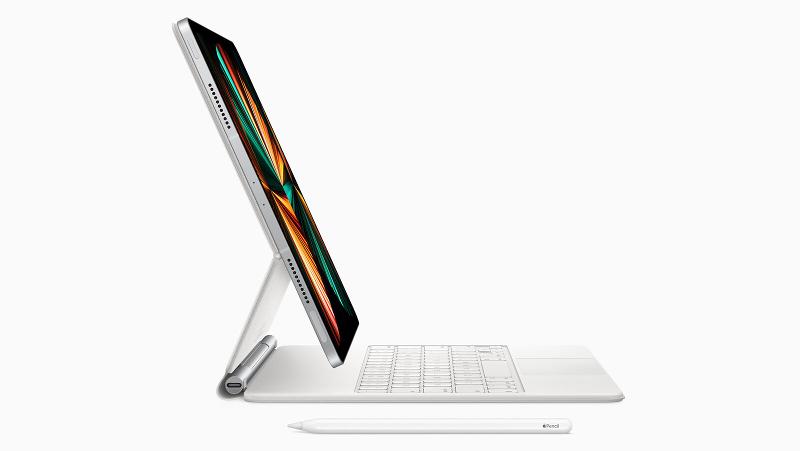 Speaking of peripherals, support remains for the 2nd-gen Apple Pencil, along with the Smart Keyboard Folio and Magic Keyboard – which is now available in white.

As ever, Apple was keen to tout the camera abilities of the iPad Pros, even if few users take advantage of them.

While the rear camera setup remains unchanged – a 12Mp main camera joined by a 10Mp ultrawide and LiDAR support – the front-facing camera has had a major upgrade.

It also supports a new feature dubbed Center Stage, in which the camera crops and pans to appear to follow you during video calls, and zoom out and in depending on the number of people in frame. We’ve seen similar tech before in smart displays, but this is the first time it’s appeared in an iPad. Together with the resolution bump, that makes this a much better option for video calls.

While Apple didn’t dwell much on software during the launch event, it did confirm that iPadOS 14.5 will be available before the new iPad Pros arrive. It unlocks new emoji, support for the latest Xbox and PS5 controllers, and expanded language support for Apple Pencil features like Scribble and Smart Selection.