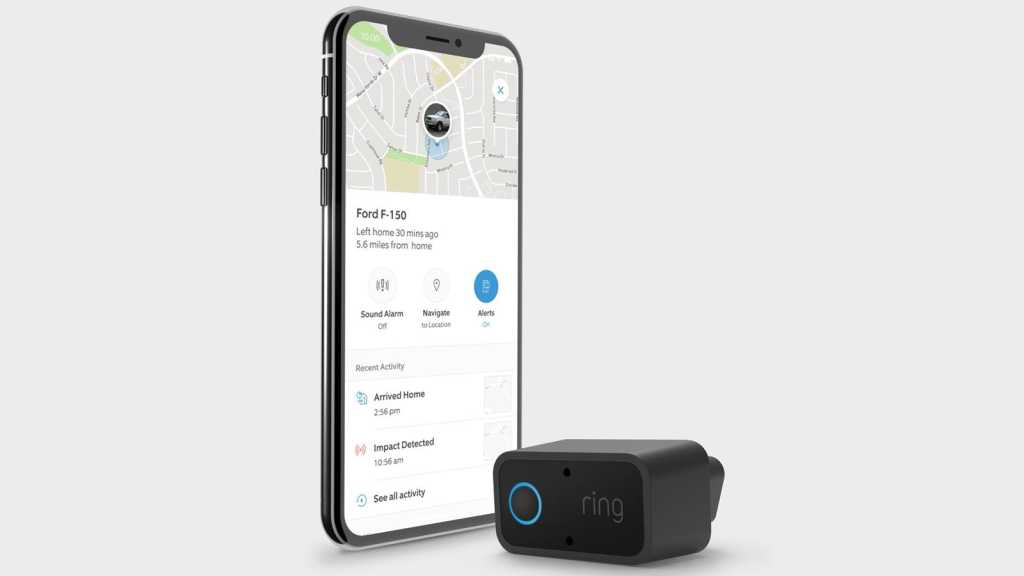 Ring is well known for its video doorbell and home security cameras.  It is now branching out into car security with an alarm, camera and an API for manufacturers so drivers can tap into the built-in  cameras and systems present in their cars.

The products are in development and won’t launch until 2021 in the US, just like the new flying indoor camera. There’s no mention of whether they might be offered outside of the US at this stage.

The Car Alarm is the cheapest of the two physical devices, costing $59.99. It’s an OBDII dongle, essentially, which is designed to be plugged into your car’s OBDII port permanently.

It will monitor and alert you if you car is hit, towed or broken into. Via the Ring app – the same used for the company’s home security products – you can trigger a built-in siren.

You can also link the Alarm with other Ring or Alexa-enabled devices you may have and set them to turn on or issue audible Alexa alerts.

Ring says that some features require Amazon Sidewalk, which is a ‘shared network’ that Amazon is rolling out later this year at no charge to customers.

The system will use existing Amazon and Ring devices to broadcast a signal over Bluetooth or using a 900MHz frequency that can extend up to half a mile, Amazon says.

It will allow devices just out of reach of home Wi-Fi to remain connected, such as the Car Alarm, smart outdoor lights and Tile trackers.

This isn’t a dash cam: it’s a security camera for your car. There are no images of the $199.99 device which will work much like Ring’s indoor security cameras, recording when your car is parked and monitoring for bumps and attempted break-ins.

When something is detected, the Ring app will alert you and you can check the live footage over Wi-Fi (if the Cam is connected to a network, such as your home, or possibly in-car hotspot) or via LTE. Obviously, you’ll need a separate data plan for the latter method.

Ring says the device will have two HD cameras, a built-in siren (like the Car Alarm) and will also let you check your vehicle’s location from the app.

While driving, the Car Cam offers a safety feature called Emergency Crash Assist. This works like the latest dash cams from Nextbase, contacting emergency services and informing them of the car’s location if a serious crash is detected. This happens automatically, so the driver or any passengers don’t have to make the call themselves.

You can also say, “Alexa, I’m being pulled over,” and the Car Cam will record the interaction and save it to the cloud. As with recent Amazon products, there’s a privacy mode which electronically disable the interior video and audio.

The final announcement is for Connect, a combination of hardware and software that car manufacturers can use to make their cars compatible with the Ring app. For example, it could send alerts if movement is detected while the car is parked and also let you tap into the video feeds from built-in cameras.

Ring is already working with Tesla, and 3, X, S and Y owners will soon be able to take advantage of these features, though Ring says you’ll still have to install an “aftermarket device” which costs $199.99 to watch Tesla Sentry Mode and recorded driving footage.

“We are constantly inventing based on customer feedback. My email is printed on our packaging so customers can easily reach me, and one of the most common requests I get is to offer the same protection for cars as we do for homes,” said Jamie Siminoff, Founder and ‘chief inventor’ of Ring. “We believe security should be accessible to everyone and today we are announcing new devices that work with for nearly every car or security need.”