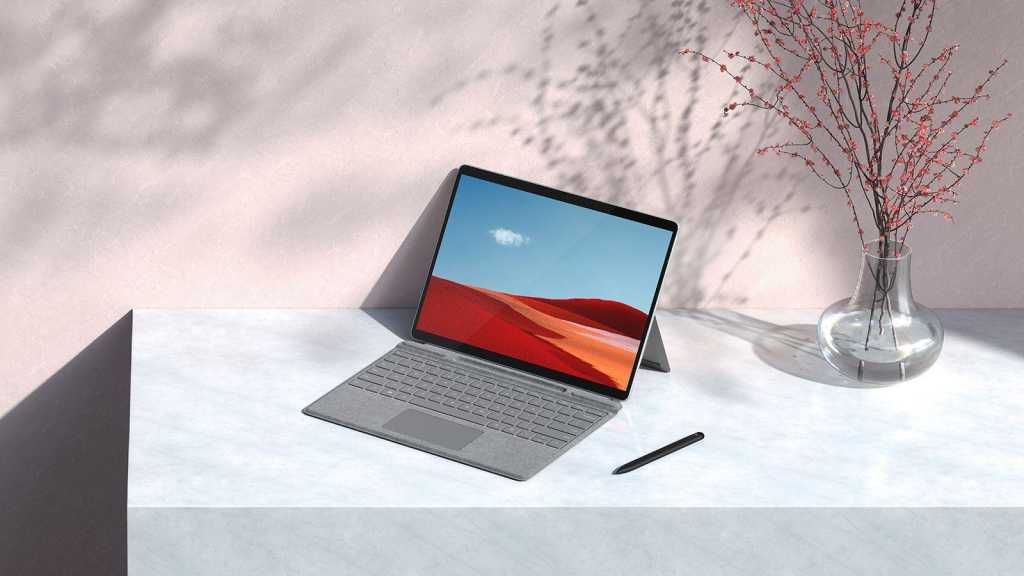 Less than a year after the original, Microsoft is back with the second generation of its ARM-powered Surface Pro X.

Known simply as “the new Surface Pro X”, the device adds a new processor and Platinium colour option in an attempt to become the go-to always on, always connected PC.

With the Pro 8 and Laptop 4 now expected to be delayed until 2021, it was arguably the highlight of Microsoft’s latest hardware drop. Here’s everything you need to know.

The device is now available from the Microsoft Store, having gone on sale on 27 October in the UK. .

Microsoft is also offering up to £950 off the new Surface if you trade in an eligible laptop. Find out more here.

The Surface Pro 8 and Surface Laptop 4, originally expected around this time, are now expected to be delayed until 2021. This confirms what Windows Central’s Zac Bowden tweeted in September:

Surface Pro 8, Surface Laptop 4, and Surface Studio 3 are not coming this fall. I’m told they’ve been pushed back to 2021. This fall is new Surface Pro X, Surface ‘Sparti’, and accessories.

While there are some useful upgrades, the new Surface Pro X starts at the same price as its predecessor:

It’s also important to note that these prices refer to the tablet itself, and don’t include the cost of accessories such as the Type Cover, Surface Pen or Surface Mouse.

While the new Surface Pro X looks relatively similar to its predecessor aesthetically, there are some big changes under the hood.

Chief among them is the move to Microsoft’s new SQ2 processor, a custom chipset designed in partnership with Qualcomm. It’s very similar to the recently-announced Snapdragon 8cx Gen 2, albeit without 5G support, which Microsoft claims will provide best-in-class graphics performance.

The performance was one of the things that held the original Surface Pro X back somewhat, so it remains to be seen how much of a leap forward Microsoft has made. The ARM-based architecture tends to also help with battery life, with Microsoft claiming the new Pro X can get 15 hours on a single charge. Like usual, it hasn’t quoted a specific capacity.

The new Pro X comes with the same 13in, 2880×1920 display as its predecessor, with the already-slim bezels unchanged. The device has two USB-C ports, but Microsoft has stuck with its proprietary Surface Connect port for charging. While it might not have 5G support, the nano-SIM tray does support gigabit LTE connectivity.

Although design changes are kept to a minimum, there is a new colour option: Platinum. It offers an alternative to the existing Matte Black, although is only available on high-end 16GB/256GB models. This does pave the way for new keyboards, with the original black now joined by silver, blue and red. They include a slot for the Surface Pen, but both are additional accessories.

Some of the compatibility issues surrounding the Surface Pro X may be resolved with app-emulation improvements, which Windows Central says might enter preview “later this year”. Once fully rolled out, it might mean the Pro X can emulate 64-bit apps in the same way it currently does for legacy 32-bit software.

Announced alongside the Pro X, the Surface Laptop Go is Microsoft’s first crack at a more affordable laptop. To see what they’ll be up against, check out our guide to the best Surface PCs.

For news on its successor, check out our guide to the third-gen Surface Pro X.