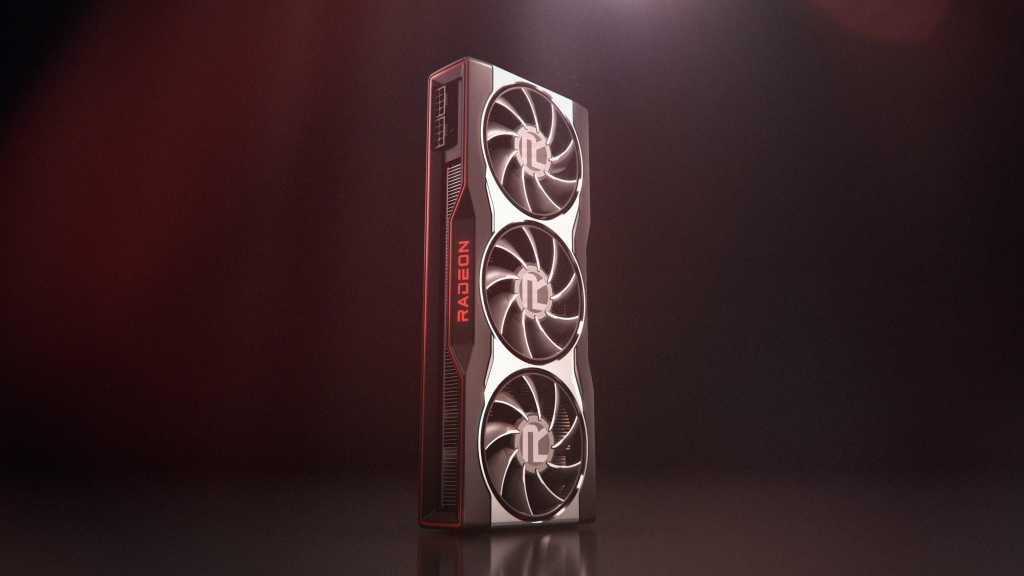 Most of AMD’s hotly anticipated RDNA 2-inspired Radeon RX 6000 Series is now available to buy, having been revealed at an event in October 2020. However, we had to wait until March 2021 a new mid-range GPU to be added to the collection, and it doesn’t look like AMD is finished yet.

While many were worried about how AMD’s latest GPU offering would compare to the impressive Nvidia RTX 3000 Series, things are looking promising, with the company claiming that it’s finally ready to compete at the high end of the GPU market.

Here’s all you need to know about the release of the AMD Radeon RX 6000 series, nicknamed Big Navi, including the announcement details, pricing, features and specs.

When was the Radeon RX 6000 Series released?

How much does the Radeon RX 6000 Series cost?

That’s actually more expensive than Nvidia’s equivalent mid-range card, with the RTX 3070 starting at £469/$499. A more obvious competitor would be the newly-announced RX 6700 XT, which will start at $479 when it arrives later this month.

There’s also a rumoured RX 6700 in the works to compete with the impressively priced Nvidia RTX 3060 Ti. It’s likely that the RX 6700 will try to match the £369 price tag of Nvidia’s GPU to be able to compete at the budget end of the market.

Of course, these are just the base prices, and third-party manufacturers will likely release overclocked variants of the range at additional price, so the cost may vary depending on what you go for. Interestingly, unlike with previous years, AMD has confirmed that it’ll keep shipping the stock three-fan GPUs alongside third-party options for the foreseeable future, so no need to worry about not being able to get your hands on one right now.

Stock is unsurprisingly incredibly limited, but when stock does sporadically appear, it does so at the likes of Scan, Overclockers UK and Box.

For more, take a look at where to buy the AMD Radeon RX 6000 Series in the UK. 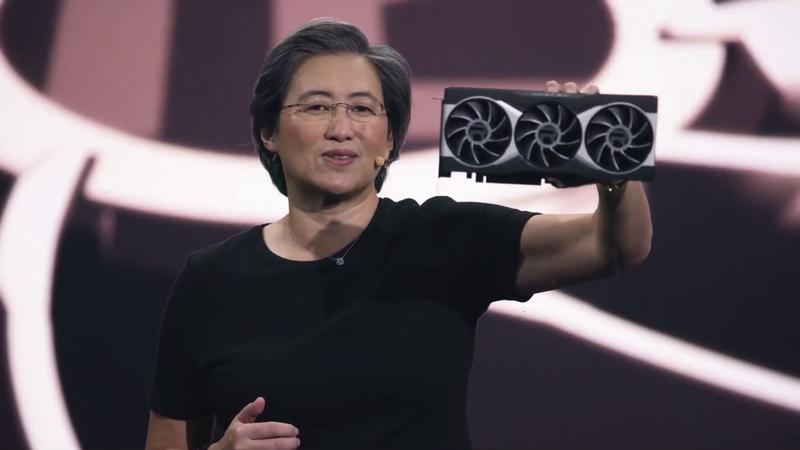 Let’s start off with the star of the show, the AMD Radeon RX 6800 XT, a direct competitor to Nvidia’s recently released RTX 3080. At the heart of the 6800 XT, like the rest of the range, you’ll find AMD’s RDNA 2 chipset, offering a 54% boost in performance-per-watt than the original RDNA architecture despite being on the same 7nm process.

When it comes to the 6800 XT, that’s paired with 72 compute units, a 2015MHz clock speed with 2250MHz boost clock and 16GB GDDR6 VRAM, and it only takes a total of 300W power. There’s also the introduction of AMD’s 128MB Infinite Cache, which looks to reduce DRAM bottlenecks and latency issues for more responsive gameplay.

To you and I, that means that the 6800 XT is more than capable of providing 4K@60fps gameplay with the highest graphical options enabled, going toe-to-toe with the RTX 3080 in many recent games. It’s also great for 1440p gamers, with AMD claiming an average of 100fps+ in many of its benchmark tests. 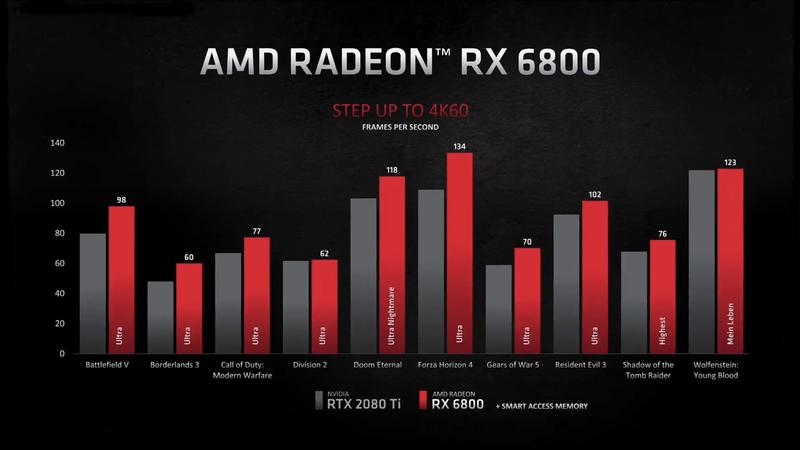 Of course, the RDNA 2 architecture also enables real-time ray tracing, a key feature of Nvidia’s RTX range since 2018, alongside other high-end gameplay mechanics like variable-rate shading, mesh sliders and sampler feedback as part of DirectX 12 Ultimate. 35 games support the functionality right now, but AMD is confident that the list will grow quickly.

The company even showcased short interviews with developers working on next-gen console games like Far Cry 6 and Dirt 5 explaining the different ways AMD’s tech is being utilised.

As well as the headline 6800 XT, you’ve got the entry-level 6800. Interestingly, many of the specs are comparable, with the same 16GB DDR6 and 128MB Infinity Cache, but with fewer compute units at 60. AMD claims it’s a great entry into either 1440p or 4K gaming, offering better performance than Nvidia’s previous-gen top-stack RTX 2080Ti, which cost over £1000/$1000.

Then there’s the 6700 XT, which was launched at AMD’s March 2021 event. It joins Nvidia’s more expensive RTX 3070 in targeting 1440p gaming, complete with 12GB of DDR6 VRAM. AMD thinks now is the time to go big on the mid-range market, pointing to a big uptick in monitor sales at this resolution.

You can find out more about the Radeon RX 6700 XT announcement separately.

And, if you’re on the market for the most powerful AMD GPU available, you’ve also got the 6900 XT, a new option designed to compete with Nvidia’s top-stack RTX 3090. It boasts even more impressive specs than the 6800 XT with an increased 80 compute units and a boosted 65% increase in performance-per-watt when compared to first-gen RDNA architecture. 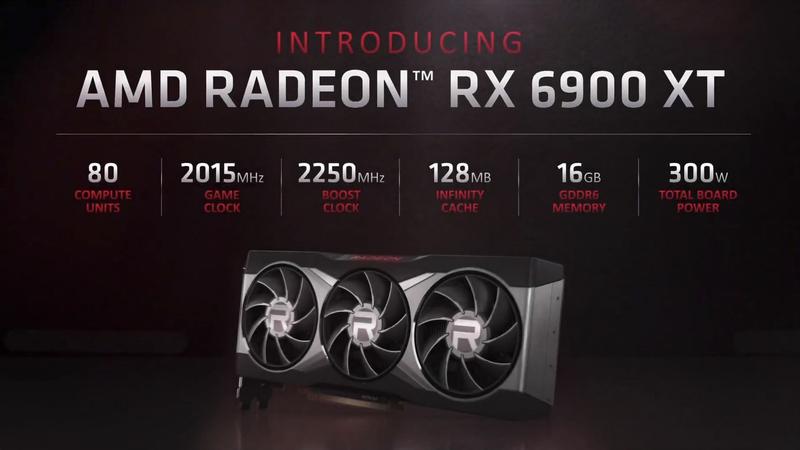 AMD claims that the performance is comparable to that of the RTX 3090, despite requiring less power (300W) and taking up a much smaller footprint, which is an incredible feat if true.

Regardless of the GPU you opt for, you’ll get access to AMD’s new one-click overclock button built into its PC software, dubbed Rage Mode. You’ve also got access to what AMD calls Smart Access Memory, unlocking a greater amount of memory from RX 6000 Series GPUs and Ryzen 5000 CPUs, offering greater performance benefits by combining the two.

There’s also second-gen latency reduction technology on offer that can cut up to 37% off your response time by using the new graphics card range with a compatible FreeSync monitor.

Whichever GPU you go for, it’s certainly an exciting time to upgrade your gaming PC.