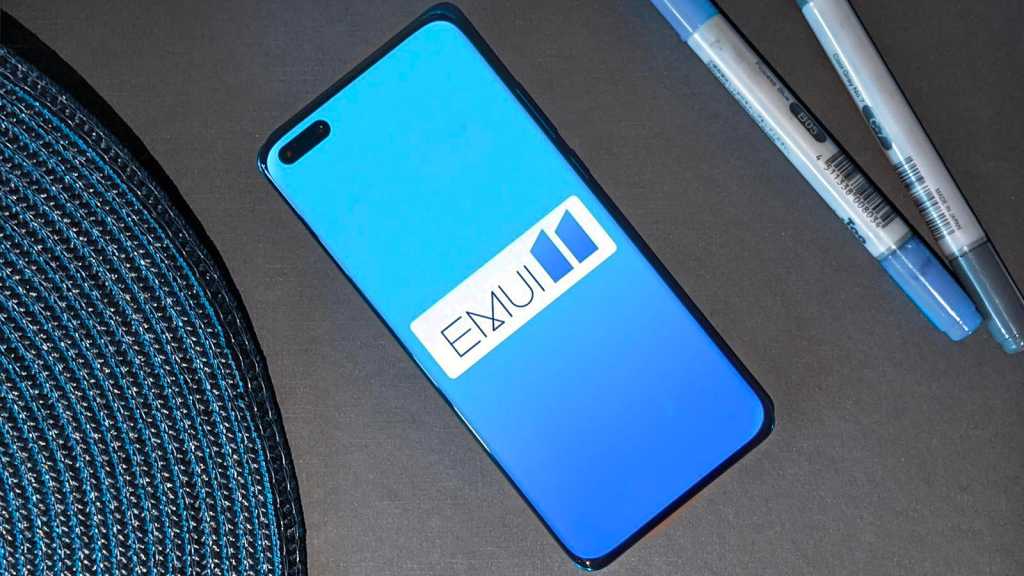 To coincide with the release of Android 11 and as part of the company’s 10 September developer conference, Huawei showed off the next major release of its Android user experience – EMUI 11 – and we’ve spent a little hands-on time with the beta ahead of its announcement.

While HarmonyOS is set to serve as the next big paradigm shift in Huawei’s software platform, more immediate changes come as part of this latest update to its existing Android-based Emotion UI user experience, currently found on both the company’s smartphones and tablets; bringing a bevvy of cosmetic and functional tweaks to the table.

What features does EMUI 11 have?

The move from EMUI 10.1 to EMUI 11 shouldn’t alienate existing Huawei users by any means. If anything, aspects of EMUI 11 have been designed to better inform user interaction – so it’s easier to keep track of where you’ve been and how your actions affect navigation around a device sporting EMUI 11.

Here’s a rundown of EMUI 11’s most notable features:

Starting with the first thing you’ll usually see on a supported phone, Huawei has added new personalisation and customisation options to the Always-on Display setup in EMUI 11. 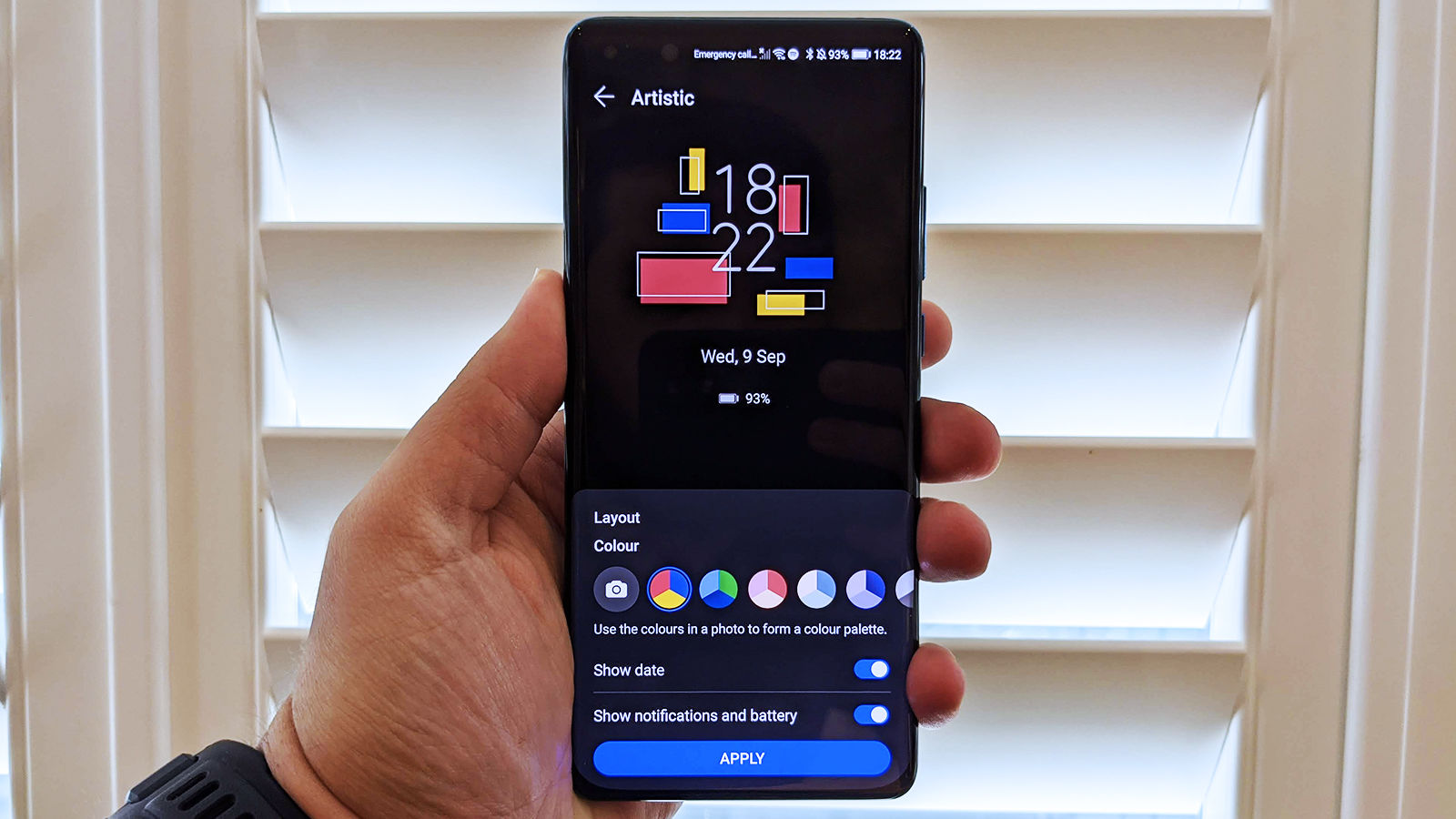 You’ll find new categories like ‘Artistic’ which feature clock styles named after famous artists and art styles that influenced them, such as ‘Mondrian’ and ‘Memphis’. The twist is that you have a selection of colour palettes to choose from to customise these new AODs and there’s even an option to extract accent colours from your camera or gallery.

If the new additions don’t suit your tastes you also have the option to use your own images, with AODs now supporting subtle animation in the form of live photos or GIFs.

When viewing the Photos tab within EMUI’s native Gallery app, you can now quickly jump between month and day view by pinching in and out with two fingers. A new animation shifts the UI accordingly, so you can keep tabs of where images sit within your timeline. 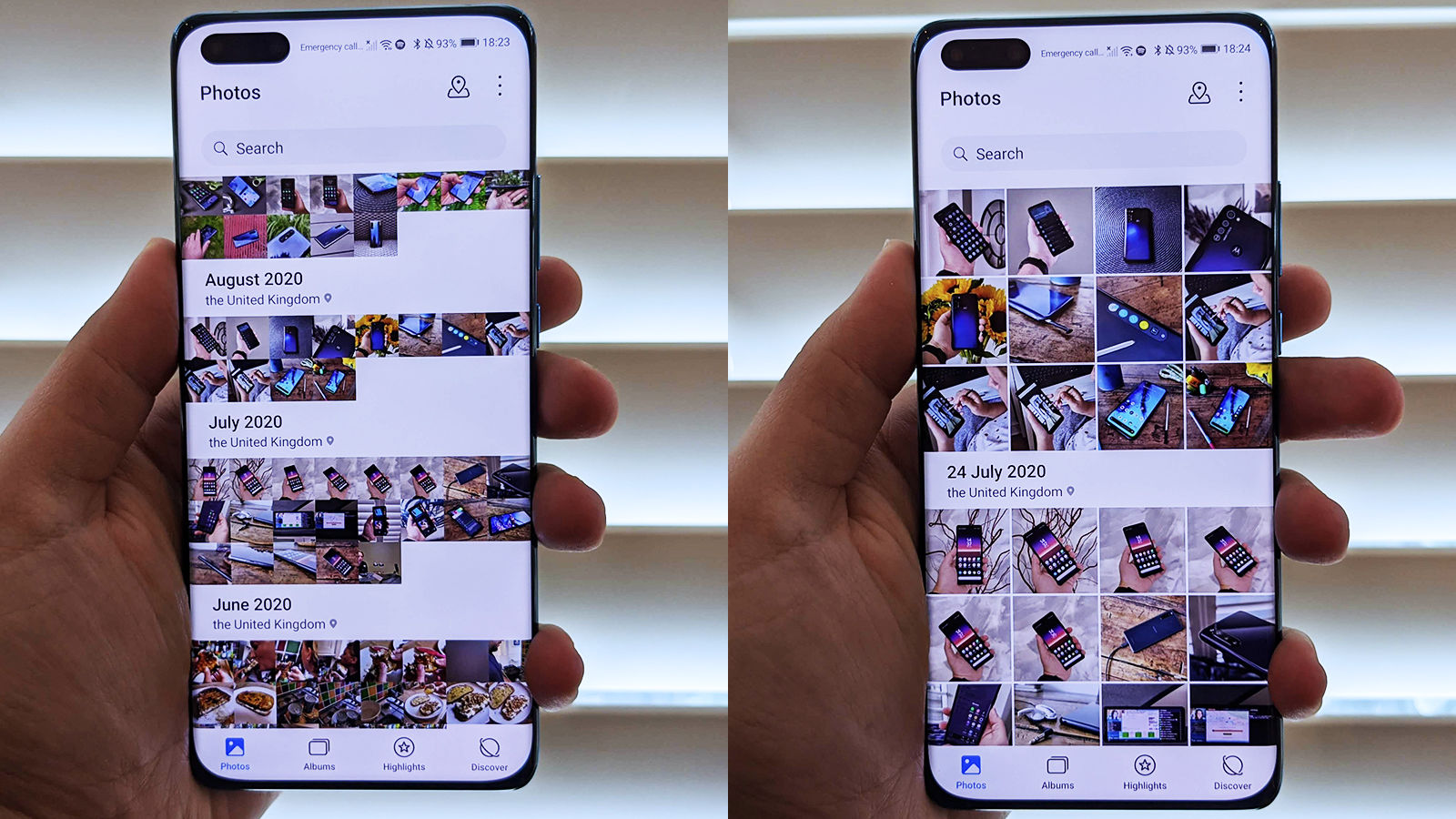 The Albums tab, meanwhile, features a revised 4:3 layout which Huawei describes as “more energetic” and it comes with new sorting options.

Straight out of Android 11, when playing audio whilst multiple audio outputs are visible to the phone or tablet you’re using, you’ll find a quick-access audio switcher. 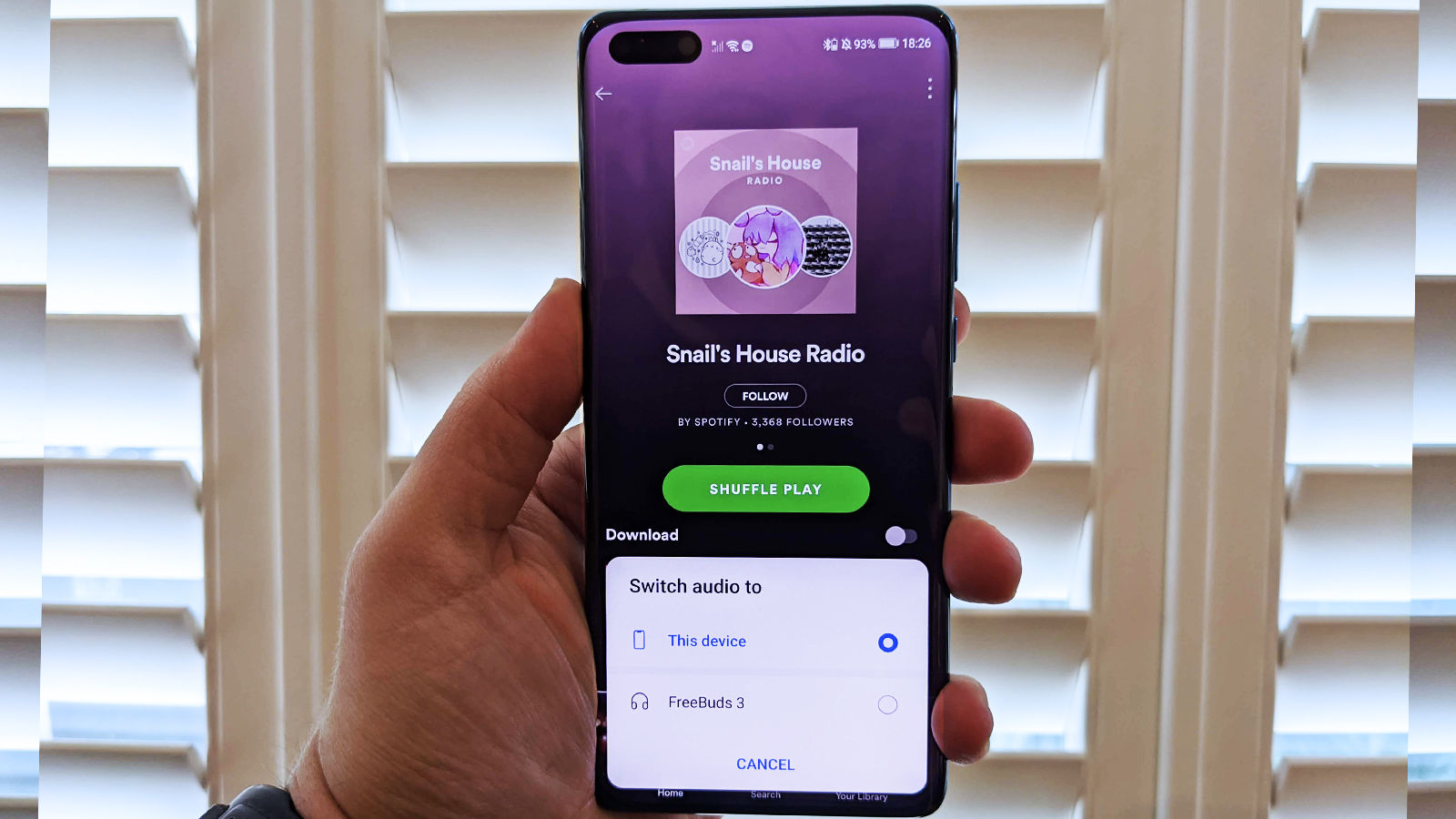 This appears within the notifications shade or as a pop-up and lets you toggle to your preferred audio source with just a tap.

Partly an evolution of an existing feature and partly a future-proofing measure, EMUI’s multi-window functionality has been expanded for v11. 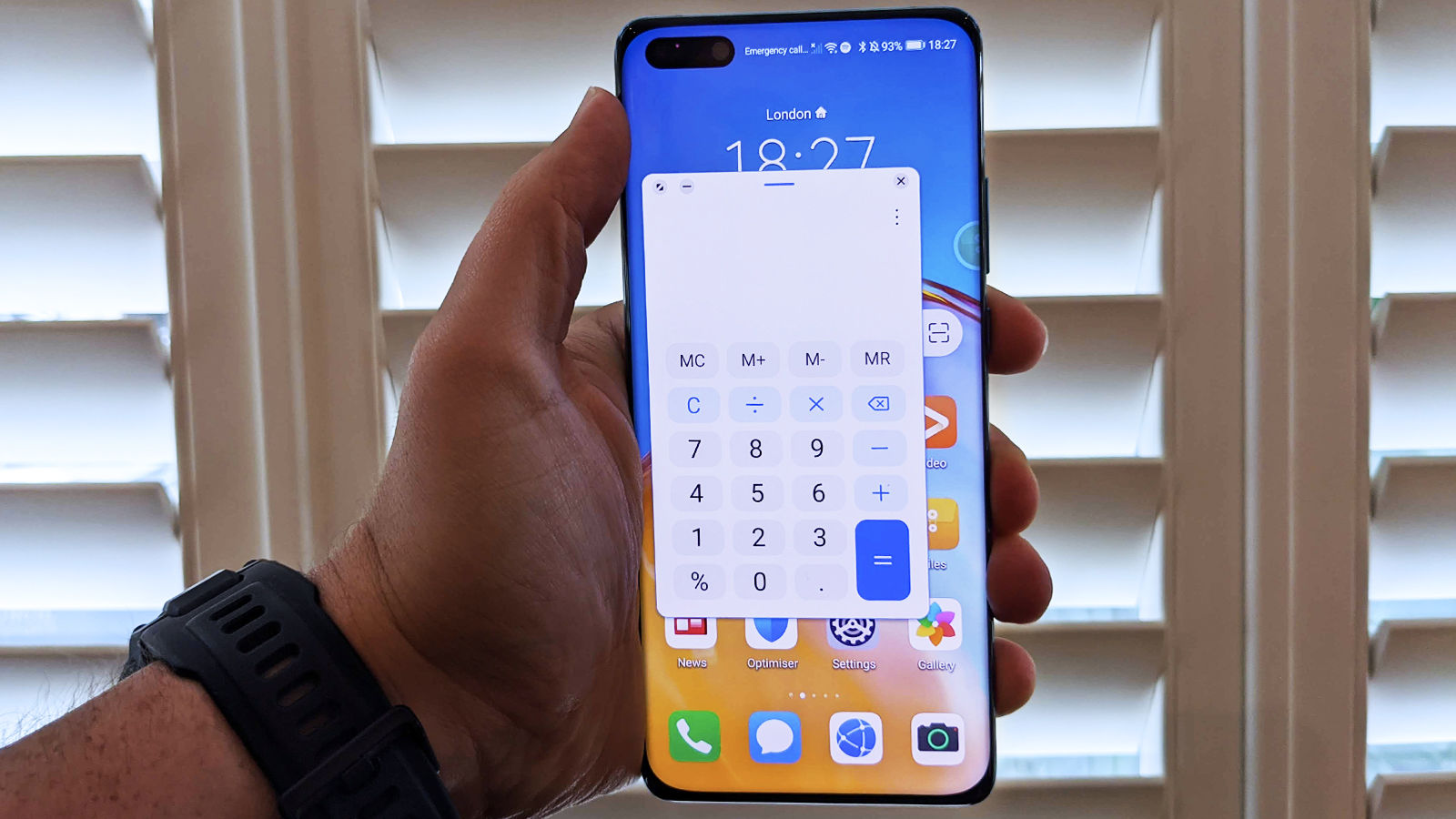 You can now drag around active floating windows, resize them and minimise them down into the ‘Quick Ball’, which sits at the side of the screen, you then have the option chop and change which windowed apps you want to jump between, almost anywhere across the UI, along with the ability to jump in and out of split-screen mode with a simple long-press-and-drag gesture.

You now have the option to extract text from images, either from your device’s gallery or directly from the camera. The feature even supports multi-page documents, so you can ‘scan’ and extract text from lengthy sources in one go. 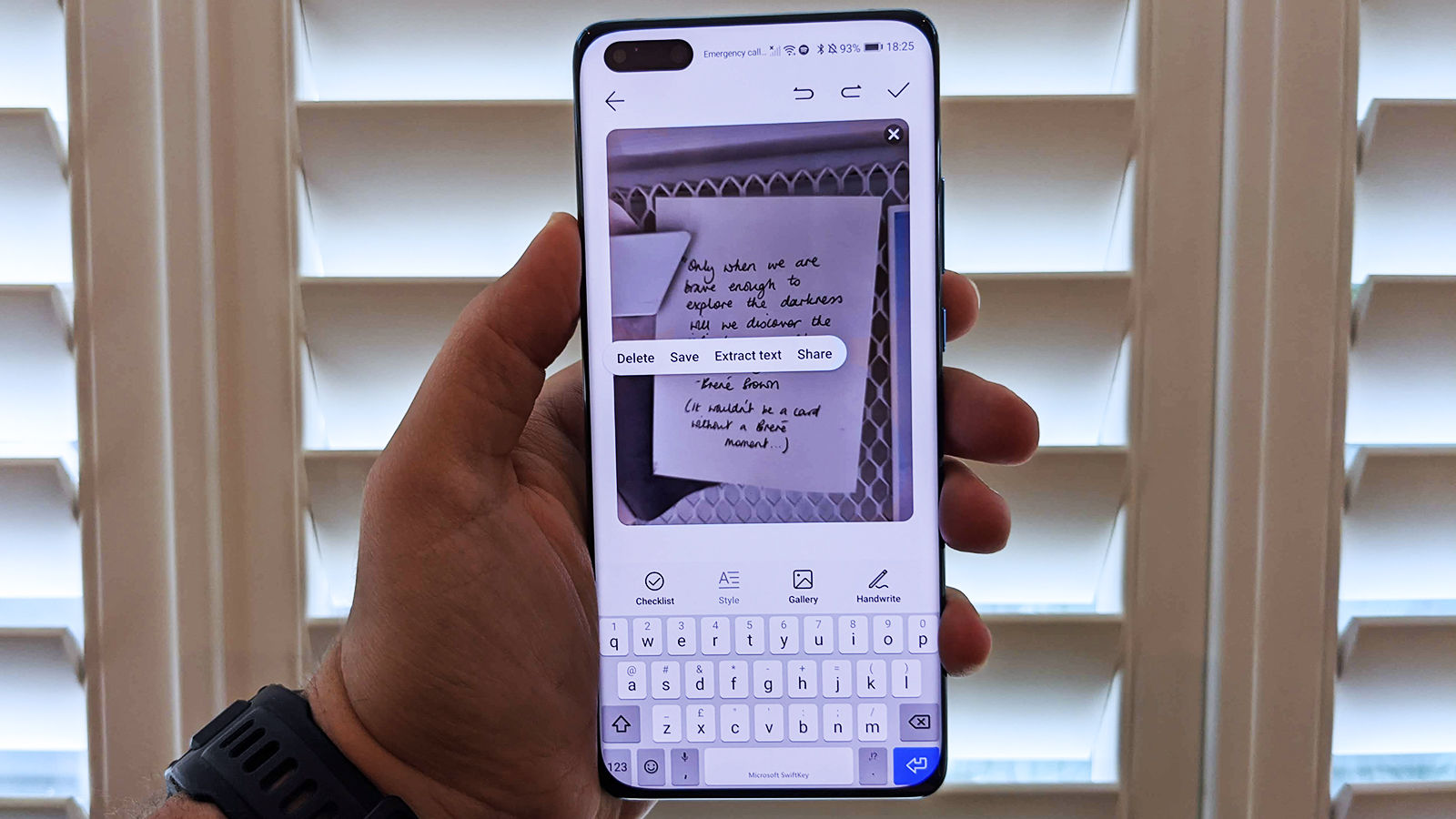 There are new options to export as a Word file and the ability to quickly pass on extracted text via Huawei Share.

As an extension of the new Notes app features, those with multiple EMUI 11-compatible devices and multi-device collaboration enabled can open Notepad on their tablet, tap the camera icon and select their phone’s camera from the menu. The camera on their connected phone will then open and can be used to extract text from an analogue source in real-time.

This cross-device camera (and microphone) access is also coming to other apps, like MeeTime and potentially third-party video chat apps in future too.

The aforementioned multi-window functionality, when used in conjunction with MSC 3.0, also now supports up to three apps running on one PC simultaneously.

Other notable features in (or coming to) EMUI 11

Third-party peripheral support in MeeTime – Wireless support for the likes of the KanDao Meeting 360° conference system and the Drift Ghost 4K+ action camera.

Wider MeeTime country support – MeeTime is currently available to users in China, Thailand, Malaysia, Singapore, the Philippines, Indonesia, Saudi Arabia and South Africa but will also be coming to Germany, France, Italy, Spain and Poland in the near future.

Wider MeeTime device support – While MeeTime is already compatible with recent P Series, Mate Series and MatePad devices, the feature is promised to expand to more Huawei products, including wearables.

Safety Cast – Cast your screen without notifications being displayed as well.

Hidden Album – A protected album within the Gallery app that stays out of sight and is protected by user authentication (face, fingerprint, PIN etc.)

“Oner” Animations – More informative “one-take” UI animations that help inform the user where they were and how their action got them to where they are now within select EMUI apps, such as Phone, Calendar, Gallery and Huawei Health.

Tighter app permissions – The ‘Always allow’ app permission is now intentionally buried deep into the settings menu (so it can still be enabled if desired) in favour of “Allow this time” and “Allow only during use” permissions.

Which devices are getting EMUI 11?

While the timeline for when each device receives an upgrade to EMUI 11 (or Magic UI 4 in the case of Honor devices) isn’t concrete every viable device that’s eligible to upgrade is listed below: