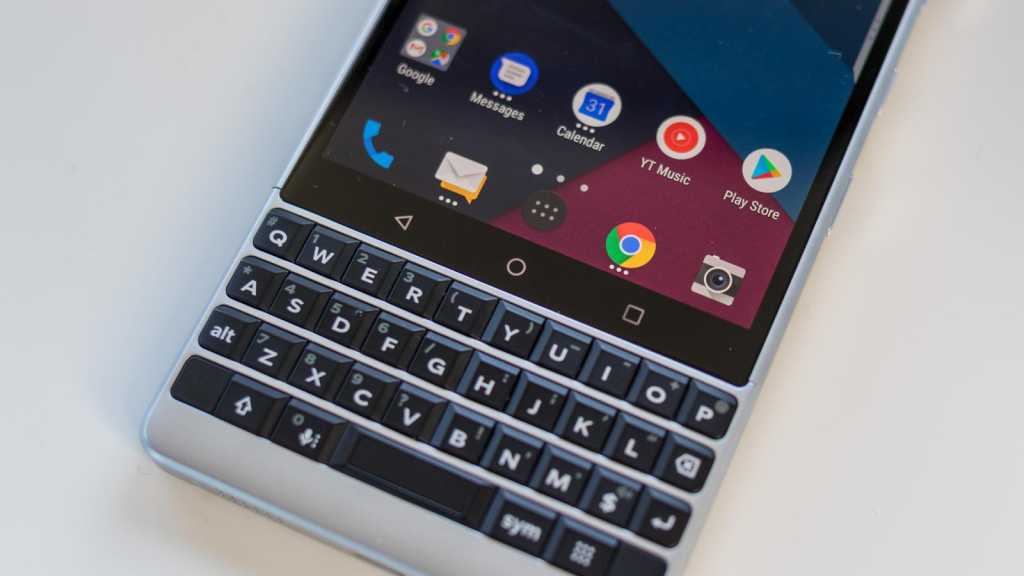 A new BlackBerry handset was supposed to launch in 2021, with the brand seemingly back from the dead… yet again. However, no such handset emerged and, more recently, the likelihood of such a device launching has moved from slim to none.

Re-treading the rise and fall of BlackBerry is a common conversation in consumer tech, especially since the brand has had a second rise and fall in the last three years.

Once the business-tinged king of the phone world in the mid-2000s, the BlackBerry’s physical keyboard and straight-faced software didn’t survive the onslaught of the iPhone and the rise of Android. BlackBerry released one Android phone – 2015’s Priv – and then stopped making phones.

TCL then bought rights to release BlackBerry-branded phones, most notably giving us 2017’s KeyOne and then 2018’s Key2 –  an even better sequel. A couple of other handsets came of the partnership, but as of 31 August 2020, TCL stopped supporting these phones with software updates and the partnership ended.

So it was with some surprise that, in the same breath as TCL’s abandonment of its license, US company OnwardMobility picked it up instead and proceeded to promise a 5G-capable BlackBerry device with a physical keyboard, arriving sometime in 2021.

When is the 2022 BlackBerry’s release date?

In short, never; at least not under OnwardMobility’s steam, not anymore. But what happened?

A new BlackBerry Android phone was originally slated to arrive in “the first half of 2021”, according to OnwardMobility’s initial 2020 press release on the subject, however, a year on from that initial window, no such ‘Berry had materialised.

In late July 2021, the company announced its ” Pre-Commitment Program,” offering fans and businesses a means of providing input on the development process of the first 5G BlackBerry, as well as the opportunity to gain early pre-order access, once the phone was ready for its debut.

While the program’s sign-up page didn’t reveal any additional information about when the phone would actually be ready for release, it did provide some insight into OnwardMobility’s progress, with the development of their device already underway at the time, but a final engineering design or specs and features had not yet been locked in.

In light of legacy BlackBerry devices officially losing software support on 4 January 2022, attentions quickly turned back to OnwardMobility and the apparent radio silence the startup had slipped into after mid-2021, leaving fans completely in the dark about the progress of its debut device and when to expect it.

Checking in on 5 January, the company’s website was stagnant; still only making mention of a 2021 release, with no new posts or activity in months, covering both the site and its social channels; making a “when” increasingly look like an “if” in the eyes of hopeful BlackBerry fans.

Following mounting attention from media and BlackBerry enthusiasts alike, however, a new blog post appeared on OnwardMobility’s blog just a day later (6 January), entitled “Contrary to popular belief, we are not dead.”

In the post, OnwardMobility acknowledged the absence of any public-facing communication and vowed to deliver “more regular updates starting this month that will clarify and answer many of your questions,” concerning the development its debut device.

With regards to the silence up until this point, the post’s opening paragraph stated, “2021 was truly a challenging year to launch a new phone, much less one with the high expectations we set and the fact that we want to get it right,” citing unspecified delays that prevented the company from shipping its debut smartphone in 2021, as had originally been promised.

Even with OnwardMobility’s seemingly renewed commitment in bringing its debut device to market, however, it turned out that BlackBerry (the company) had other plans, not long after.

On 10 February, CrackBerry’s Kevin Michaluk described the project as “dead as of yesterday,” stating that numerous sources had verified that OnwardMobility’s efforts had been sunk.

BlackBerry (the company) had chosen to cancel OnwardMobility’s license (preventing it from using the BlackBerry name), a move that itself had followed on from the Canadian company selling off the last of its mobile patent portfolio, reportedly to the tune of US$600 million.

This loss of the BlackBerry branding, paired with the difficult and protracted timeline in which OnwardMobility was having to deal with were all apparently contributing factors in its decision to abandon the project. Less than a week later, the company announced that it was shutting down entirely, with its website being replaced by a single statement (pictured below), thanking fans for their support and lamenting the decision to shut up shop.

As such, for those still wondering or hoping when to expect another new BlackBerry, right now, things are looking bleaker than ever.

How much would the 2022 BlackBerry cost?

While OnwardMobility’s plans may have been scuppered there are still insights that we can use to estimate the cost of what could have been.

Pricing for the first 5G BlackBerry was expected to be fairly high, around perhaps the £800/US$800 mark, driven by the probability that OnwardMobility would have likely been selling the phone in smaller numbers than the average manufacturer.

TCL’s BlackBerry phones were generally more expensive than the specs warranted – compared to competing devices – and that didn’t seem likely to change with OnwardMobility’s ‘Berry.

A BlackBerry in 2021/2022 is a niche device, to say the least, and while the premium price would have no doubt been intended to reflect the exclusivity of a secure phone with a keyboard, the reality is that it would have probably been expensive because of this same niche appeal.

What specs would the 2022 BlackBerry have offered?

According to OnwardMobility, their new BlackBerry promised 5G networking capabilities and a physical keyboard. These really are the only two specs were ever officially teased, aside from the fact that the phone will run on Android.

As well as licensing the BlackBerry name, OnwardMobility was also confirmed to be working with FIH Mobile Limited – a subsidiary of Foxconn – to manufacture the phone.

The only part of the original announcement that hinted at the specs of the phone stated that “there is an absolute need for a secure, feature-rich 5G-ready phone that enhances productivity.”

That’s still pretty vague but suggests that BlackBerry – the company (after ceasing producing its own phones, BlackBerry focused on becoming a viable cyber security brand) – was likely involved at the software level, as it was with TCL’s licensed phones.

While the cancellation of OnwardMobility license was something of a surprising in this latest saga, the preceding trend of BlackBerry selling off its catalogue of patents was nothing new.

Over the past few years the company had been busy shedding its mobile patent portfolio, with 90 sold to Huawei as of mid-2021, though admittedly that’s a drop in the ocean compared to the purported total haul of 38,000 patents it was at one point in possession of.

“Feature-rich” perhaps means that the new BlackBerry was meant to be an all-singing, all-dancing high-end device, unlike the KeyOne or Key2. 5G phones don’t need to tout the latest, most powerful Snapdragon chipsets but it could’ve helped the new BlackBerry garner more staying power with buyers. The KeyOne, in particular, runs pretty slow today and was not well future-proofed.

OnwardMobility’s intended device apparently took a lot of cues from 2015’s BlackBerry Priv; the last phone BlackBerry itself made and also the first BlackBerry to run Android.

We discuss Onward Mobility’s original plans for its first BlackBerry phone in episode 97 of our weekly podcast Fast Charge:

With so little concrete information ever established about this unfinished BlackBerry phone here are a few things we would have like to have seen, in order to do the brand justice.

The KeyOne and Key2 used the same exact screen and it was not a good one. Colours were a little muted and brightness wasn’t great. A premium BlackBerry needs to pack a much better display, and we’d hope for one with a high refresh rate in this day and age. If OnwardMobility was hoping to attract business professionals, it needed to treat them to a premium screen.

It sort of goes without saying that the physical keyboard needs to be good but the last great keyboard on a BlackBerry was 2014’s BlackBerry Classic. The clicky, tactile keys haven’t been recreated since. The Key2 got closest, but the keys were too small and too square.

The problem with putting larger keys in is the expectation of modern smartphone form factors. The KeyOne and Key2 had poky screens in order to fit a physical keyboard below them and still have a phone of manageable size. As already alluded to, OnwardMobility would have been right to take inspiration from the BlackBerry Priv; with a regular touchscreen smartphone display and a sliding form factor that hides a physical keyboard.

Then again, if the phone had aped the compact design of the BlackBerry Bold 9900 and made Android work properly, we’d have been in nostalgia heaven.

The cameras on the TCL BlackBerrys were all weak. We had hope that the 5G BlackBerry’s cameras would have been able to hold their own against modern smartphones. If companies continue to bring the brand back, they need to stop compromising on the quality of the cameras; one of the main things people value on their phones nowadays – even businesspeople.