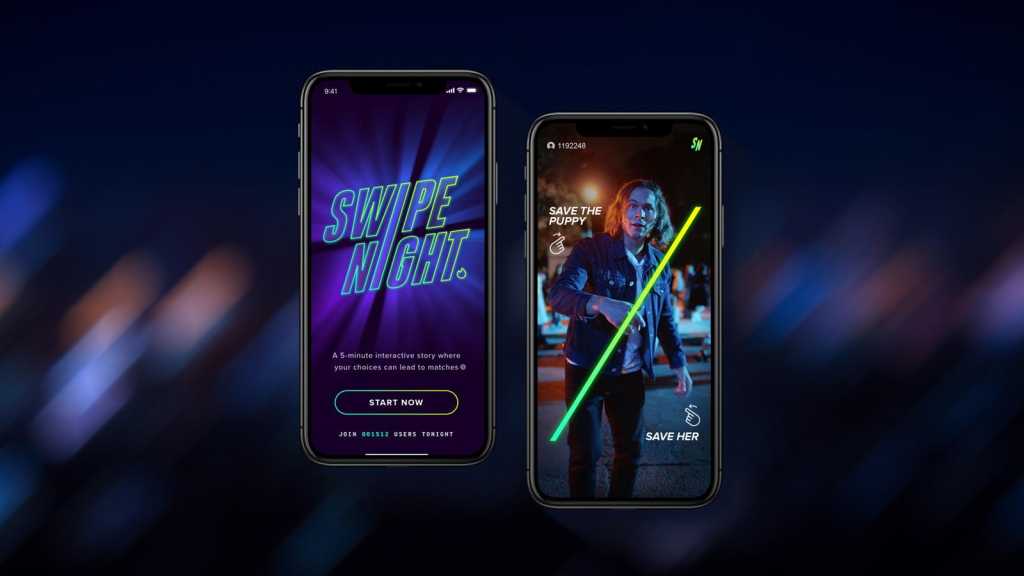 Almost a year after it premiered in the United States, Tinder is bringing its interactive Swipe Night TV show to the rest of the world – including the UK.

But what on earth is Swipe Night, why should you watch it, and even if you’re sold already, when and how do you actually get involved? Swipe right (or scroll down, actually) for all the answers you need.

What is Swipe Night?

Swipe Night is essentially a mini interactive TV show that you watch – or play – within the Tinder app on your phone.

The vertically shot, point-of-view show places you in the shoes of a teenager at a house party to watch a comet passing very close to Earth. Unfortunately, the comet comes a little closer than expected, leaving you and your friends scrambling for safety during what might just be the apocalypse.

At key points throughout every episode you’ll have to make decisions about what happens next. You’ll have seven seconds to swipe either left or right to choose between the options: some as innocuous as what song to play at the party; some as important as whose life to save.

Each episode lasts about ten minutes, but of course it’ll vary a bit based on the choices you make – the version you watch might not be quite the same as everyone else’s.

It even does clever stuff like making your phone vibrate when a text message is sent within the show or when during the big, dramatic moments.

What’s the point of Swipe Night?

Simply put, it’s a bit of fun – and hopefully a way to get a few more matches.

The idea is that after watching you’ve now got something to chat to new matches about, as you compare the decisions you made and the scenes you saw through that week’s episode.

Some of the choices you made during the show will actually appear on your profile after the episode airs, so potential matches will get a quick sense of whether you’re the type to save a puppy or not.

Unless you’re the sort of monster who doesn’t save the dog, it should help you get more matches too. Tinder says that when it first aired Swipe Night in the US, matches increased by 26% and messages increased by 12% compared to a typical weekend.

When is Swipe Night?

The first episode of Swipe Night will air worldwide starting from 10am on Saturday 12 September. That’s 10am no matter what time zone you’re in, so it will always start on Saturday morning wherever you are.

The episode will be available to watch any time during the weekend, disappearing at midnight on Sunday 13 September.

The following two episodes will follow the same release pattern across the next two weeks, so will be available on 19-20 September and 26-27 September respectively.

It’s worth noting that Swipe Night will air again in the US, despite the fact that the show already debuted in the States in October 2019,.

That might in part be because the new version will be a little different: with the best part of a year to reflect on how the original performed, the company went ahead and condensed the show from four episodes down to three, making it tighter, quicker, and hopefully more exciting.

How do I watch?

If you want to watch Swipe Night, you simply have to open the Tinder app during each of the three weekends when it airs, and the app will give you the option to watch the episode right there within the app.

Why was Swipe Night delayed?

Swipe Night was always meant to roll out to the US before the rest of the world, but the gap wasn’t meant to be quite this severe.

As with many things in 2020, Covid-19 is to blame. Tinder decided that an apocalyptic adventure wasn’t quite what everyone wanted in the middle of a pandemic, which is why the company instead made the app’s Passport feature free for a while.

Now that things are slowly opening up and returning to something akin to normal in much of the world, it apparently felt like the right time to give Swipe Night another go.

Will there be more Swipe Night?

Yup! Though it might not be a sequel to this story.

Tinder has confirmed that it’s working on a second lot of Swipe Night, though understandably production was put on pause by the pandemic. With that in mind, we don’t know when more Swipe Night might arrive, and it definitely won’t be this year.