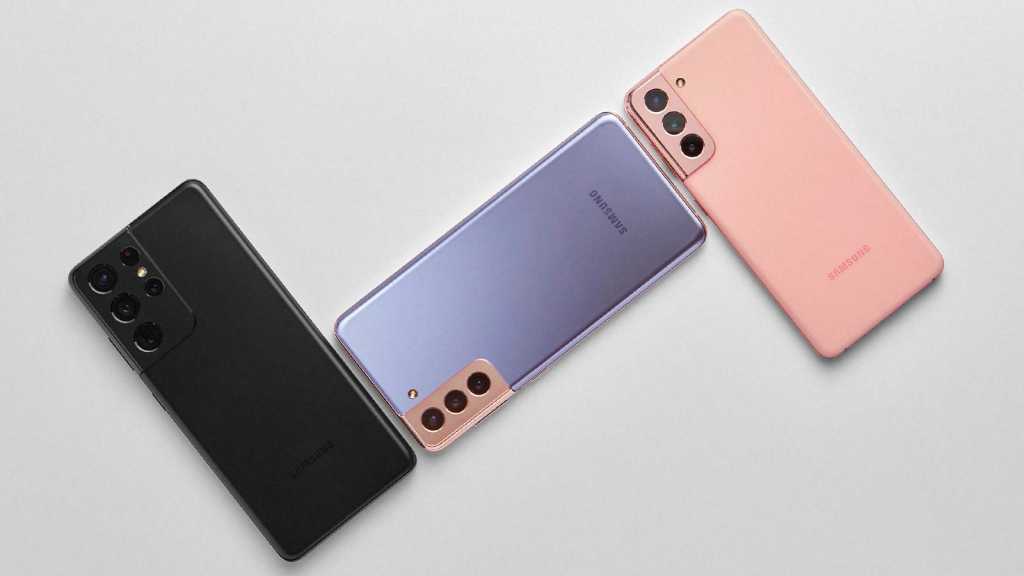 Less than a year on from the introduction of the S20 series, Samsung has now pulled the wraps off its debut flagship smartphone lineup for 2021 in the Samsung Galaxy S21, Galaxy S21 Plus and Galaxy S21 Ultra.

The company’s first Unpacked event of the year introduced us to the trio of long-rumoured high-end handsets, along with its new true wireless Galaxy Buds Pro earphones and the new Galaxy SmartTag location tracker.

While the deluge of leaks that preceded the S21 series’ launch painted a pretty complete picture of what to expect, now that we have all the pieces of the puzzle from Samsung officially, we can run through everything these powerful new phones bring to the table.

When is the Samsung Galaxy S21’s release date?

Samsung held its first Samsung Unpacked press event of 2021 virtually on 14 January and in markets including the US, UK and much of Europe, the phones were made available for pre-order on the same day, with pre-orders shipping on 28 January and the phones going on general sale on 29 January.

How much is the Samsung Galaxy S21 series?

For a more detailed breakdown on the S21 range’s various storage and RAM SKUs, along with relevant pricing, check out our ‘ Where to buy the Samsung Galaxy S21, S21+ and S21 Ultra‘ feature.

What features does the Samsung Galaxy S21 series offer?

As the model names suggest, this year’s Galaxy S series follows a similar trend to last year’s lineup: three devices, more features (along with a larger screen and a higher starting price) as you move up the range.

The S21 and larger S21+ also share more in common, compared to the top-tier S21 Ultra, especially when it comes to their cameras.

All three phones come powered by a 5nm chipset, but which one depends on the market in which you buy the phone; either Qualcomm’s Snapdragon 888 in regions like the US or Samsung’s own Exynos 2100 in the likes of Europe. It’s unclear whether one chip offers any notable advantage over the other at this stage, and we’ll have to wait to perform side-by-side comparisons to know for sure.

Previously, Snapdragon-toting Galaxy flagships consistently performed better overall, with their Exynos counterparts lagging behind in both raw performance and power efficiency. That said, it seems that Samsung’s tried to even the playing field with the new Exynos 2100 and early signs suggest it can actually outperform the Snapdragon 888, thanks mainly to higher clock speeds across its eight cores.

All three phones showcase additional camera features too, with a particular focus on video. There are new and improved modes – such as Motion View, Directors View and Vlogger View – as well as the ability to capture up to 8K footage at 24 frames per second and capture at 4K resolution video at 60fps across all of the phone’s lenses.

As with Apple and, more recently, Xiaomi, Samsung has also decided to nix the headphones and power adapter that used to be included in-box, leaning on the hope that – at this stage – users will already have an existing compatible charger and that the move will reflect positively on the company’s environmental credentials.

The base Galaxy S21 is built around a 6.2in Full HD+ (that’s lower resolution than the S20) display and its smaller footprint means it also has the smallest capacity battery (4000mAh), not to mention the lowest weight (172 grams) of the S21 line. 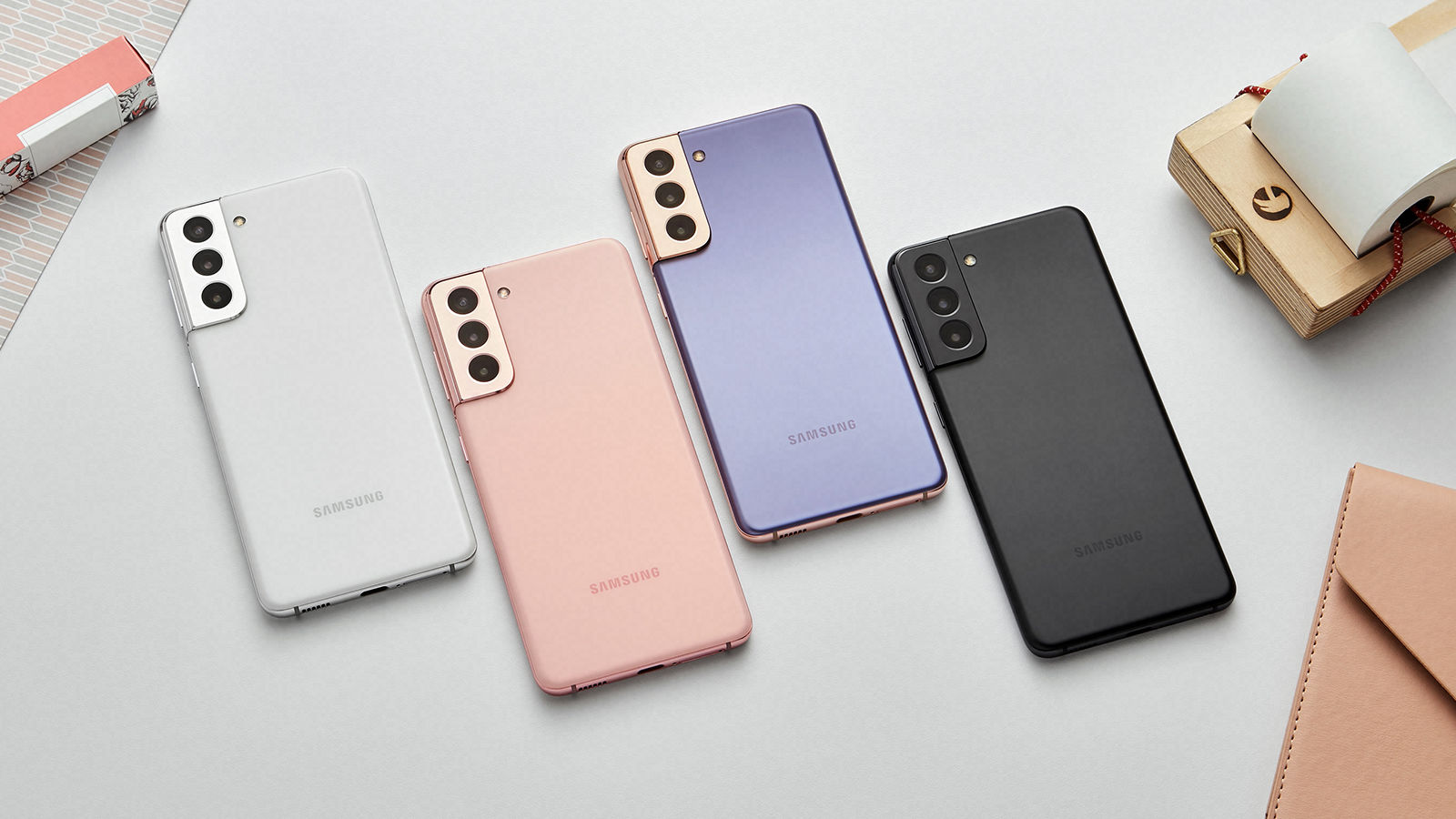 While the display is protected by Corning’s most advanced Gorilla Glass Victus, unlike the Plus and Ultra, the back of the S21 is actually a “specially reinforced polycarbonate material,” which translates to ‘plastic’.

Samsung has started to make a habit of opting for cheaper materials on some of its high-end devices, with last year’s Galaxy Note 20 also sporting a ‘Glasstic’ back, even though its launch sibling, the Note 20 Ultra, boasted a reinforced glass back.

Here’s a full spec rundown for the Galaxy S21:

The Galaxy S21+ shares in the same triple camera setup as the base model, set into this series’ signature “contour cut” camera module. It also happens to be the thinnest member of this year’s Galaxy S line at just 7.8mm. 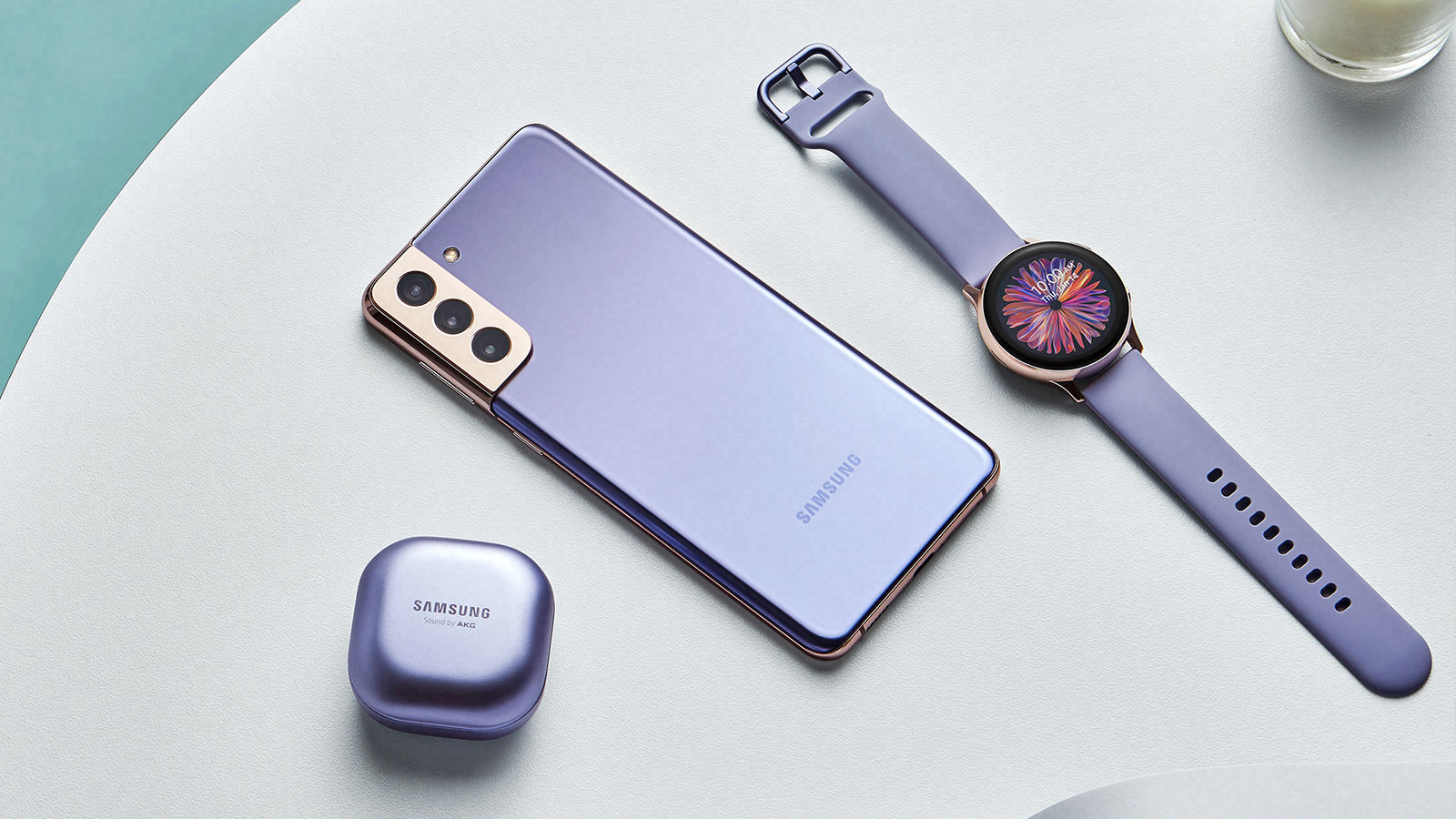 Little else is different, compared to its smaller sibling, save for a larger 4800mAh battery, Gorilla Glass Victus on the front and back, three colours to choose from (instead of four) and the addition of UWB technology, which Samsung introduced on last year’s Note 20 Ultra.

An extension of Samsung’s SmartThings Find service, through a combination of Bluetooth LE and UWB technology, the S21+ can be used to find lost compatible Galaxy products (including headphones, smartwatches and the new Galaxy SmartTag) even if they lack a mobile or WiFi data connection. If you lose the S21+ itself, it can also be found using another SmartThings Find compatible device paired with your Samsung account.

While unquestionably being the most powerful and capable member of the S21 series, the S21 Ultra also has the most to prove. Its predecessor promised so much but stumbled over its key selling point – its camera – resulting in lacklustre image quality, focusing issues and a 100x ‘Space Zoom’ that was little more than marketing guff. 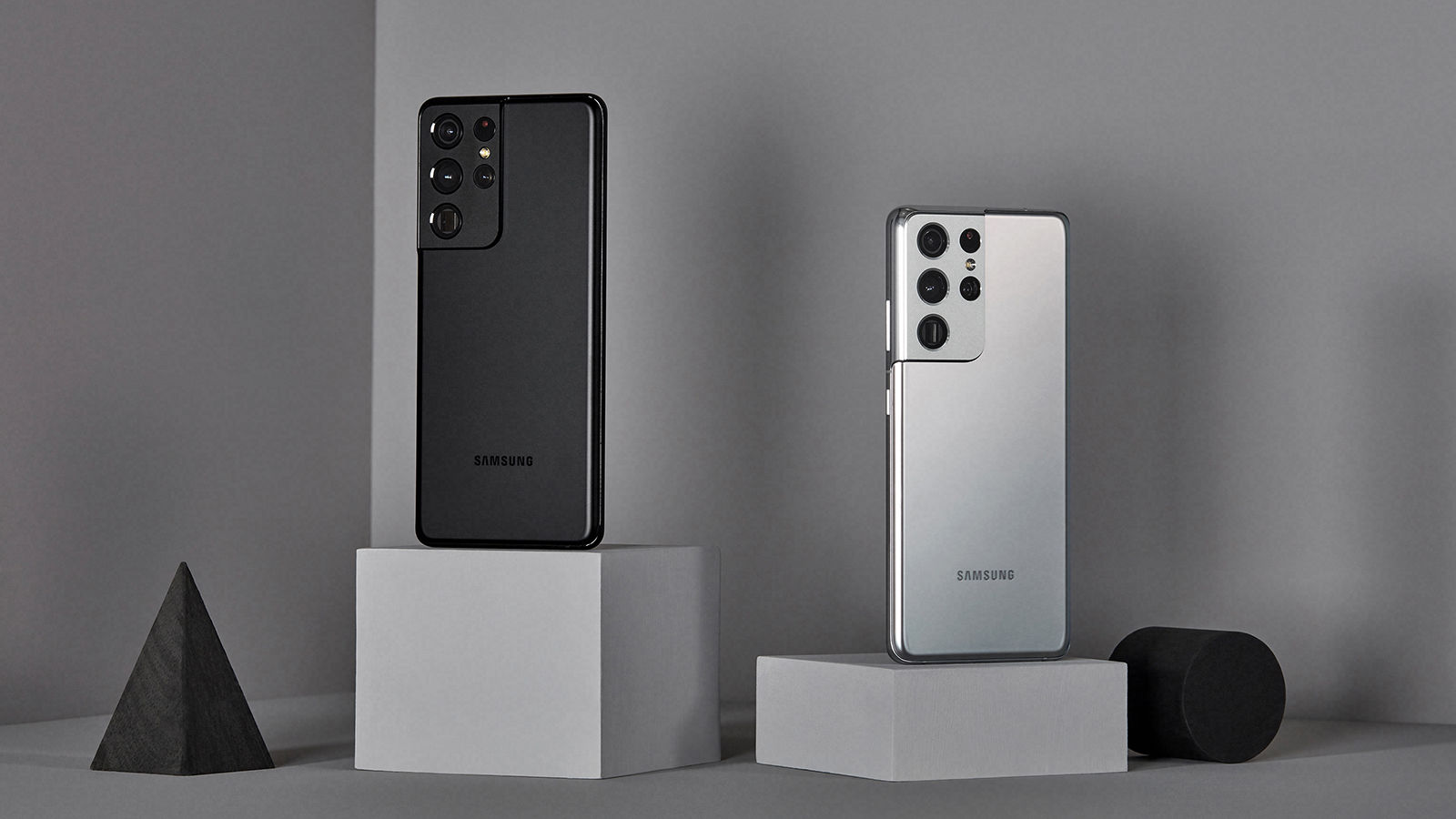 To address these points specifically, the S21 Ultra centres around a completely reworked camera setup, fronted by a new 108Mp sensor. As before, it sports an f/1.8 aperture and features 0.8µm pixels, plus OIS (optical image stabilisation), and it uses pixel-binning (combining nine pixels’ worth of data into one) to help iron out shake, noise and improve low light performance.

Samsung describes this new module as a “faster Night Bright sensor,” all but confirming that this year’s Ultra is using the rumoured ISOCELL Bright HM3. Focus is also supported by a dedicated laser-based system – something that brought notable improvements to the focusing speed on last year’s Note 20 Ultra, compared to the S20 Ultra.

As for the camera’s signature zoom capabilities, the S21 Ultra packs in not one, but two telephoto sensors; one f/2.4 lens offering 3x magnification and one f/4.9 periscopic sensor, boasting 10x zoom. Both sensors are 10Mp in resolution, feature 1.22µm pixels and leverage OIS. 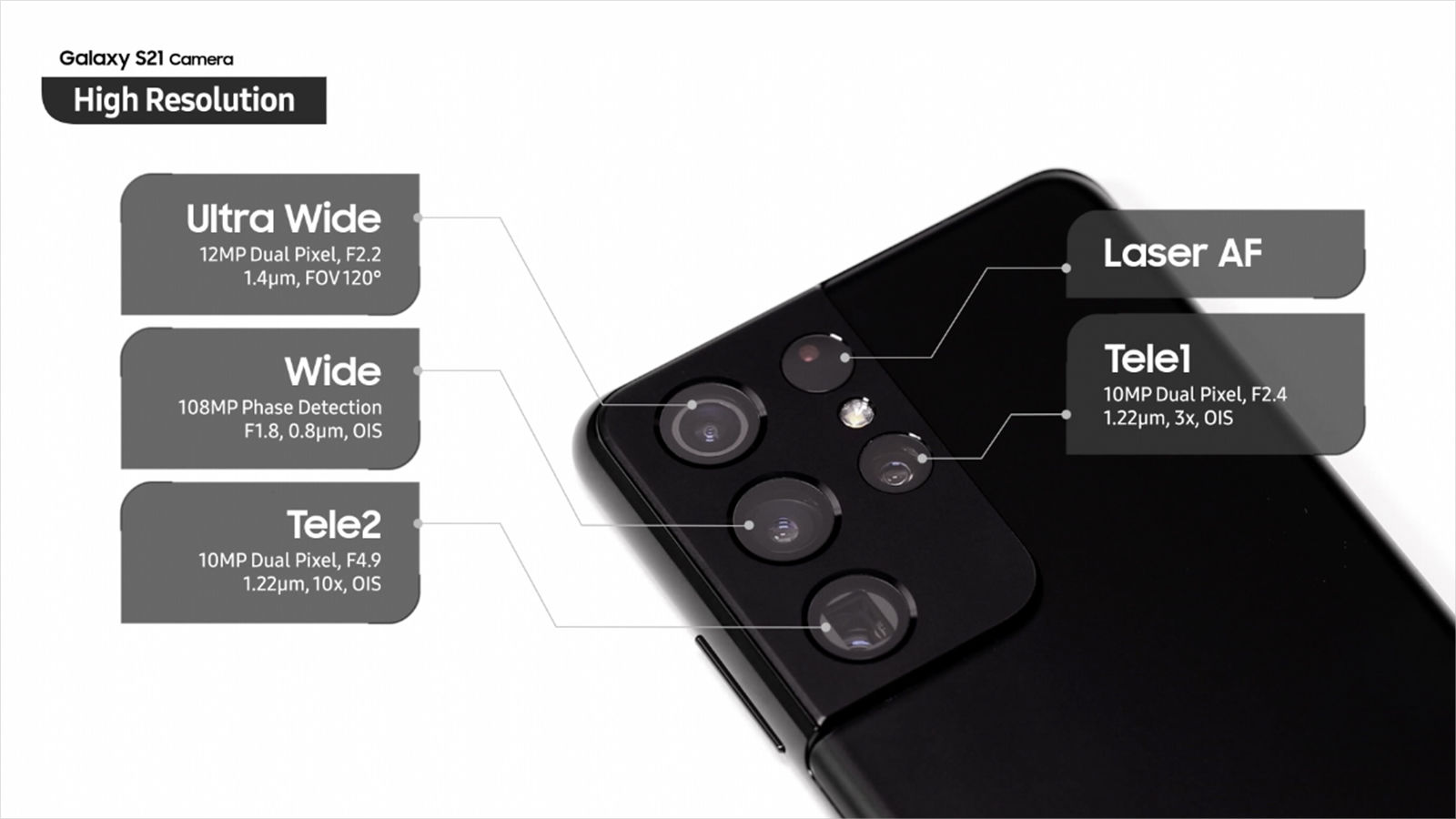 In addition, zooming past 30x now adds in the option of Zoom Lock, which helps lock a subject in-frame at extreme levels of magnification.

To round out the snapper setup on the Ultra, there’s also a 12Mp ultrawide camera and on the front, a 40Mp hole-punch selfie camera.

Beyond its cameras, like the S21+, the S21 Ultra features UWB support but also serves as the first phone on the market to leverage WiFi 6E technology – adding support for frequencies between 5.925GHz and 7.125GHz, and thus future-proofing the phone’s networking technologies way beyond the current competition.

Two other highlights worth mentioning are the phone’s more dynamic display, which supports a wider refresh rate range compared to the Dynamic AMOLED 2X panels on the other S21 models (10Hz to 120Hz, in this instance), designed to help with power efficiency. It can also (finally) display content at 120Hz while also being set to its full WQHD+ resolution – something that wasn’t possible on last year’s phones. 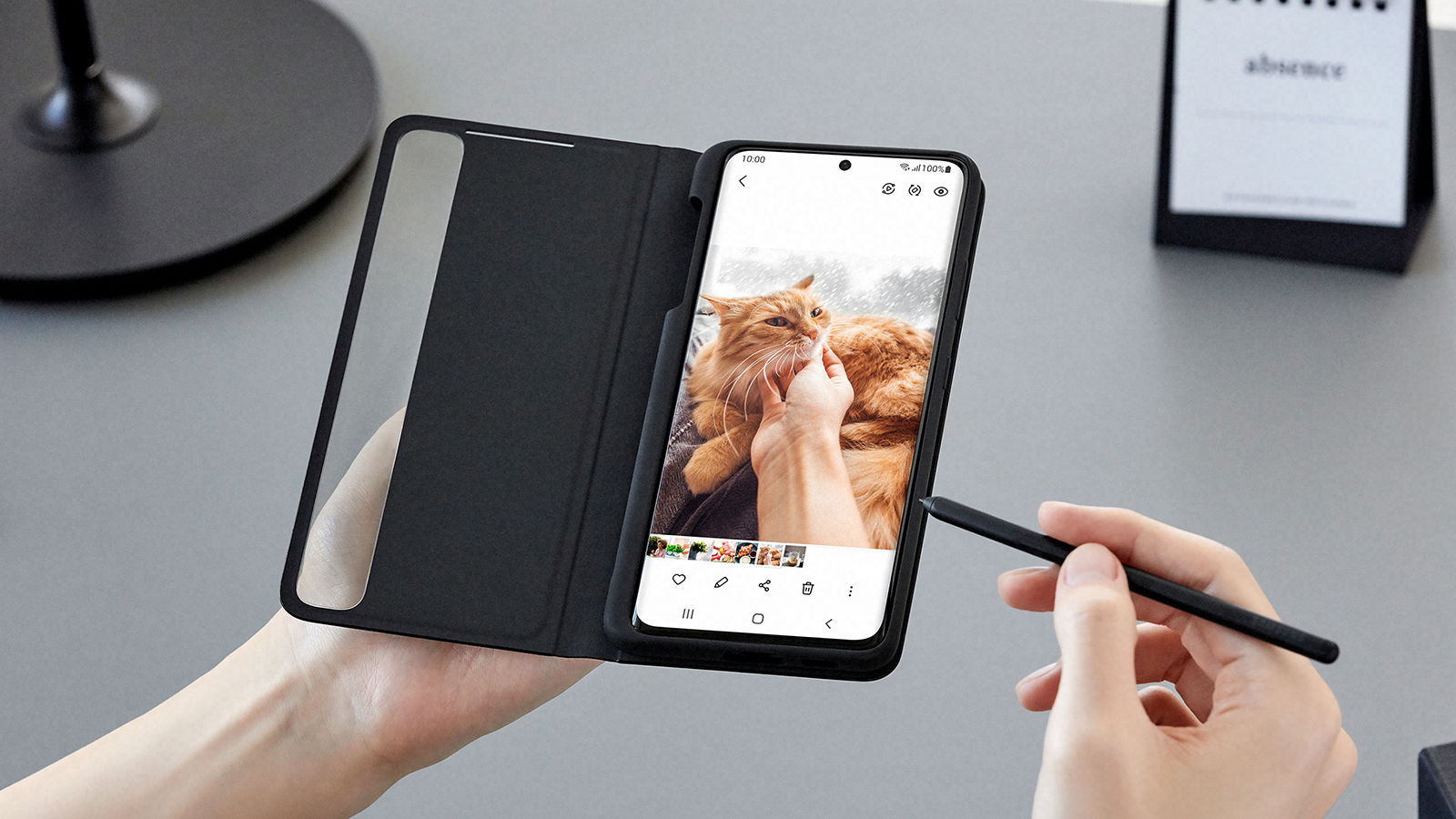 As rumoured, S Pen stylus support is indeed part of the Galaxy S recipe now too, with the S21 Ultra offering up similar (although not identical) S Pen functionality to that of the Note 20 Ultra, for those that want a stylus. Unlike the Note though, the S21 Ultra’s S Pen is sold separately, as are a pair of official cases in which it can be housed (one of which is pictured above).

Here are all the S21 Ultra’s important facts and figures:

Want more? Tune into our discussion on the Galaxy S21 launch as it happened, along with highlights from CES 2021 and the latest rumours around the Oppo Find X3, in this special episode of our weekly podcast – Fast Charge: