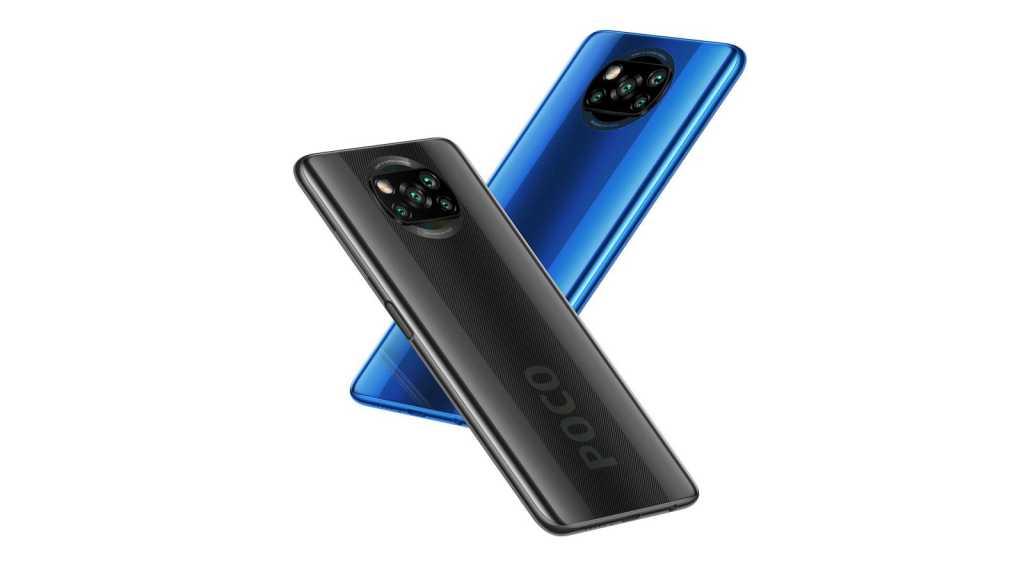 Xiaomi’s Poco X3 NFC is one of the most powerful budget phones on the market, delivering gamer-ready specs at an extremely affordable price, in part by skipping 5G support.

The X3 has now been joined worldwide by the X3 Pro, an even more powerful variant that somehow manages to hit the same price point as the original while delivering stronger core specs.

Here’s everything you need to know about the Poco X3 NFC and X3 Pro, including when and where you’ll be able to buy the new version.

When did the Poco X3 and X3 Pro release?

The Poco X3 launched on 7 September, and is on sale in the UK now from the Xiaomi website or Amazon UK. We reviewed the phone shortly after the launch, so read that now and find out why we almost gave it five stars.

The Poco X3 Pro was announced alongside the Poco F3 on 22 March 2021, and is also on sale now, via the Poco site or Amazon.

How much do the Poco X3 and X3 Pro cost?

The Poco X3 launched in the UK in two specifications:

The price makes the Poco X3 eligible for our best budget phone chart, and also undercuts the £329 price of the Pocophone F1, the closest thing to a UK predecessor for the phone.

Its main competitors at that price are the Realme 7, Xiaomi’s own Redmi Note 9S, and the Oppo A9 2020. 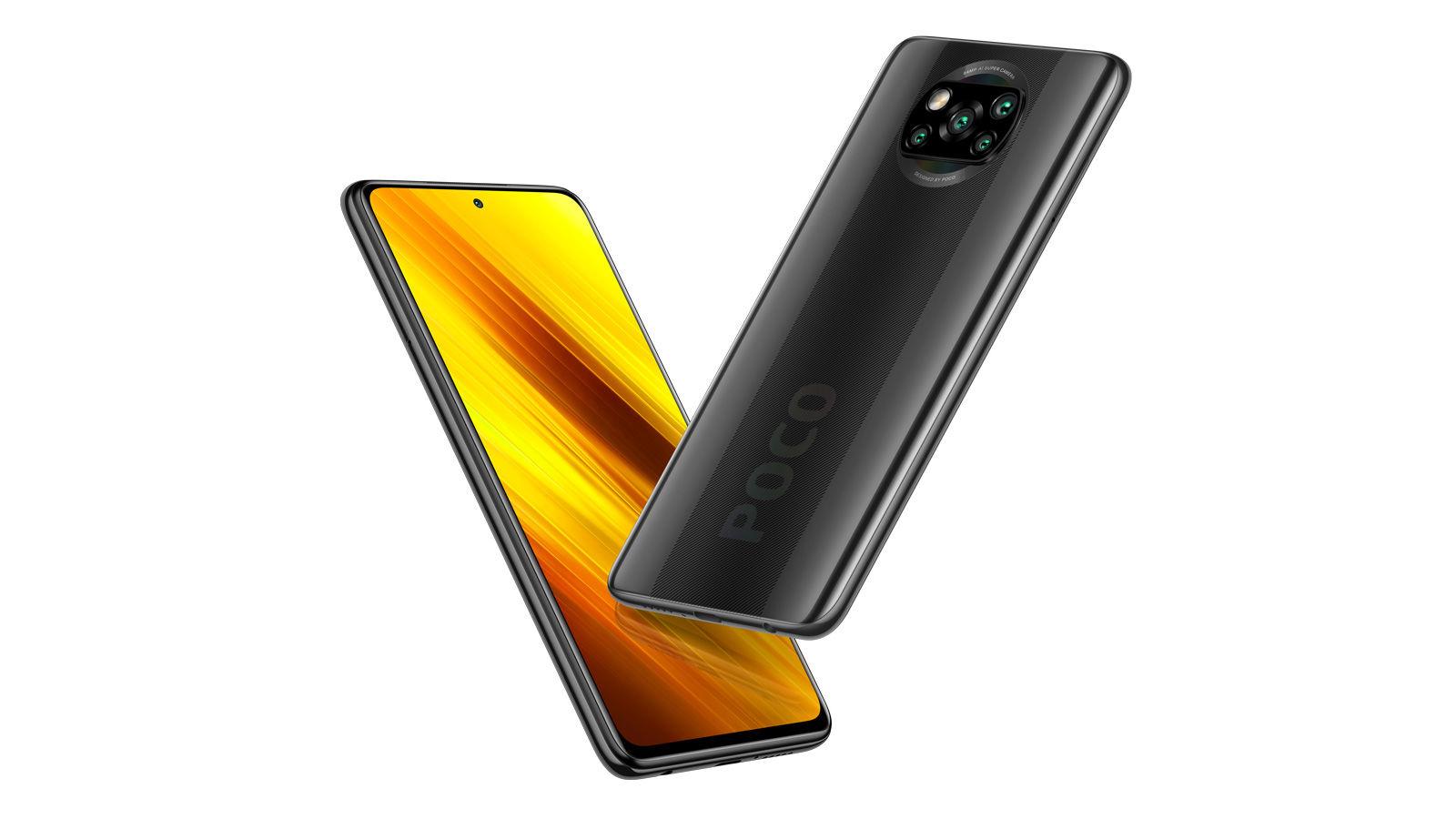 The Poco X3 Pro somehow costs the same, despite stronger specs – so we’re expecting to see prices drop for the regular model. Here’s what the Pro will set you back:

What about the Poco X3 specs & features?

For a phone that’s less than £200 that’s a solid spec sheet, which is really no surprise coming from Poco. 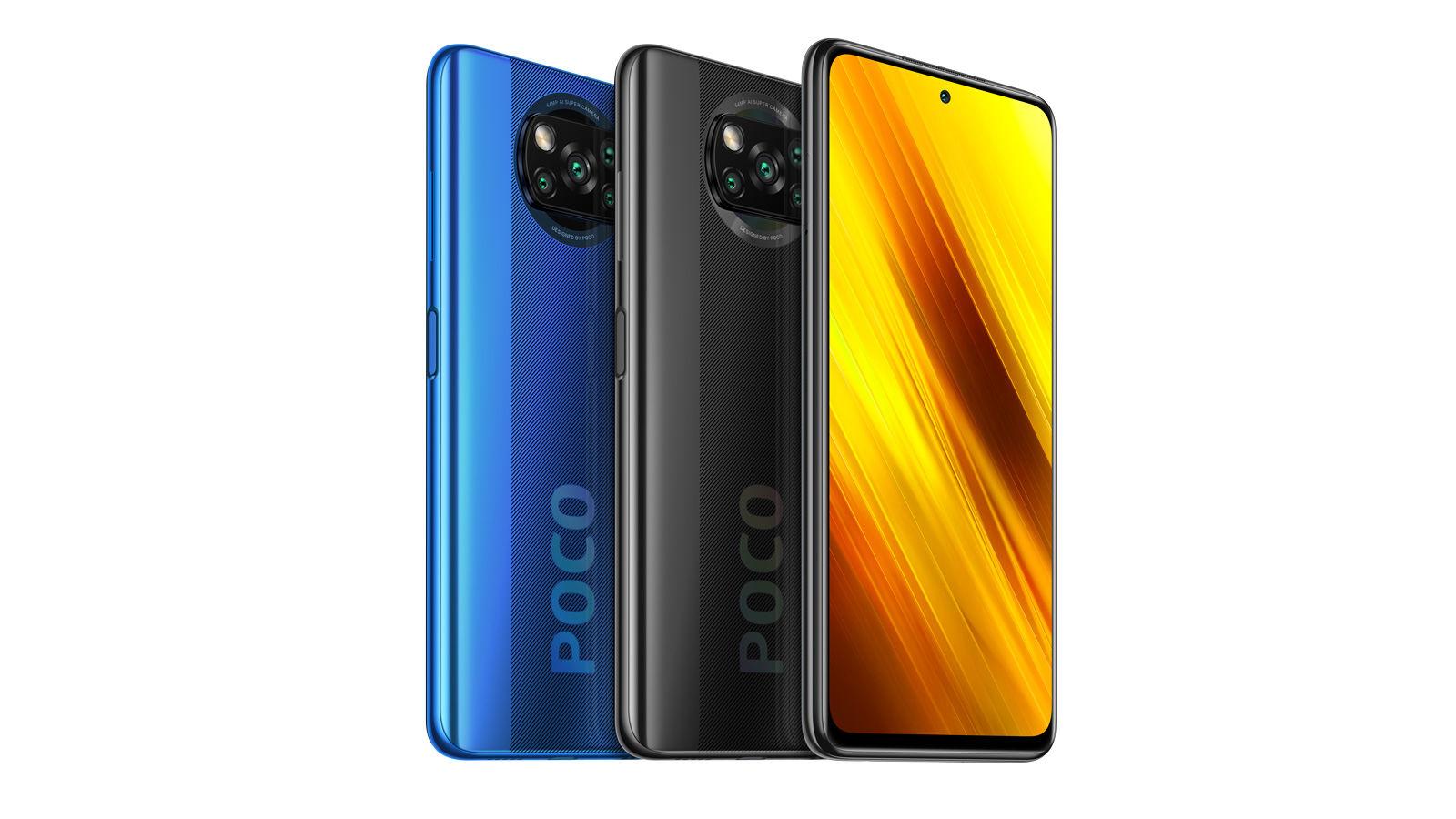 This was one of the first phones to use Qualcomm’s Snapdragon 732G, which offers really solid mid-range performance, especially in gaming, making it pretty powerful for the price. It’s worth noting that there’s no 5G support though, so this is a 4G-only phone.

As mentioned above, it comes with 6GB of RAM and your choice of 64GB or 128GB storage. If that’s not enough, there’s also expandable storage, with up to another 256GB.

The 6.67in LCD screen has a 120Hz refresh rate and 240Hz touch sampling, with HDR10 support and an impressive 87% DCI-P3 colour gamut – meaning colour accuracy should be amazing. It’s interrupted only by a small punch-hole selfie camera in the centre, which offers 20Mp shots. 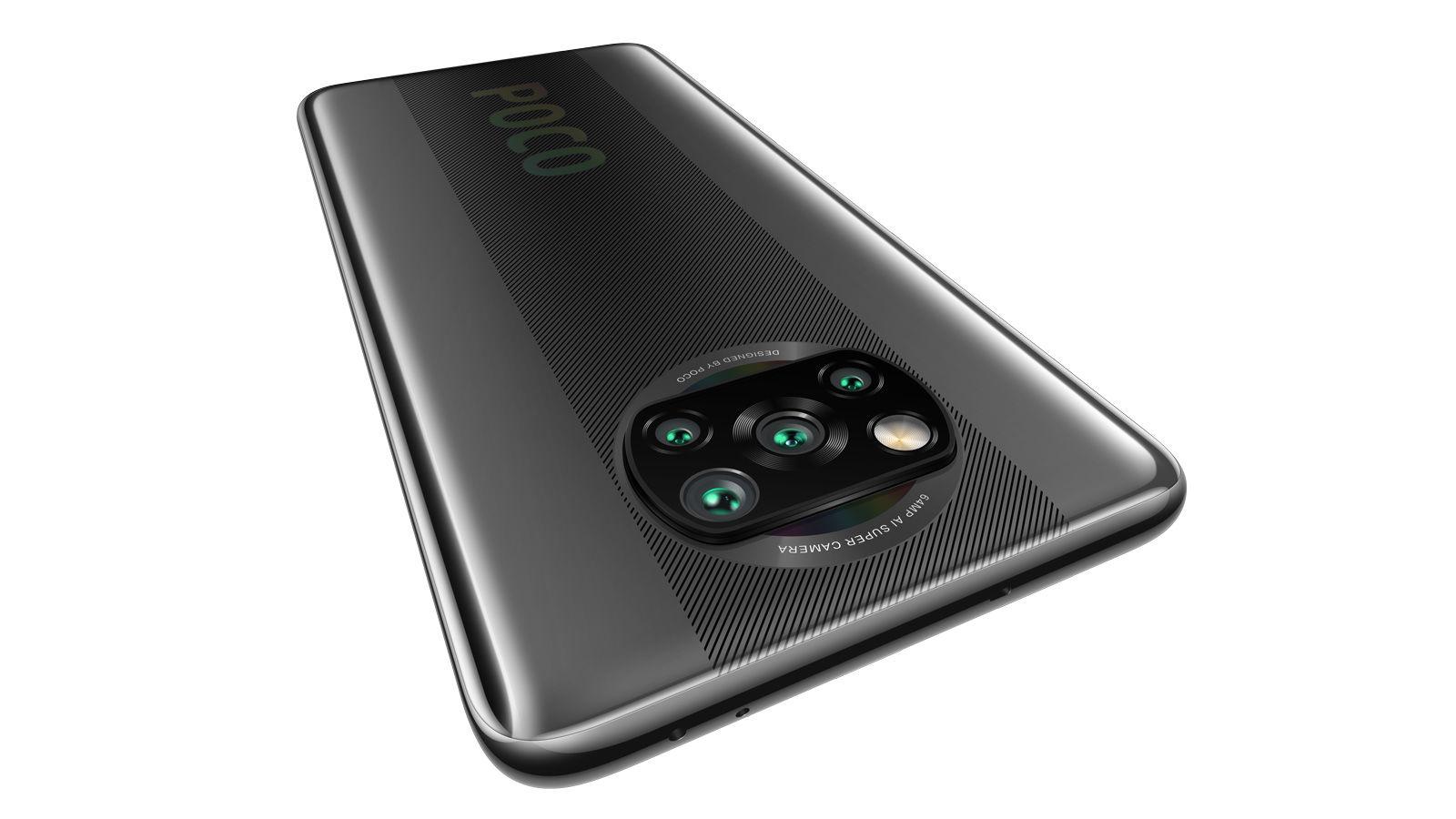 There are four cameras on the rear, arranged in a pretty unusual looking camera module. The main lens is a 64Mp, f/1.73 with the Sony IMX682 sensor (oddly a slight downgrade from the IMX686 in the Poco X2) that uses 4-in-1 pixel binning. It’s backed up by a 13Mp ultra-wide, 2Mp macro, and 2Mp depth sensor. It’ll also handle 4K video recording at 30 frames per second.

Then there’s the huge 5160mAh battery. Poco says the phone should last two days of moderate use, and with that capacity it honestly might. 33W fast charging is fairly nippy too, and should get you over 60% of the battery back in just half an hour of charging.

There’s a side-mounted fingerprint scanner built into the power button, dual stereo speakers, IP53 water-resistance, a 3.5mm headphone jack, and last but not least, NFC support – in case you couldn’t guess from the name.

There is also a non-NFC version launched in India, simply called the Poco X3, and this compensates with an even larger 6000mAh battery.

As for software, it runs Android 10 out of the box, using a version of Xiaomi’s MIUI12 customised for Poco. The company has also promised three years of updates for the phone, and will even make kernel sources available for each patch for the really techie users who want to tweak the OS exactly to their liking.

What about the Poco X3 Pro?

Fans had to wait a while for the Poco X3 Pro, which has arrived a full six months after the original X3. Still, it looks like it’s worth the wait, with a few key upgrades. 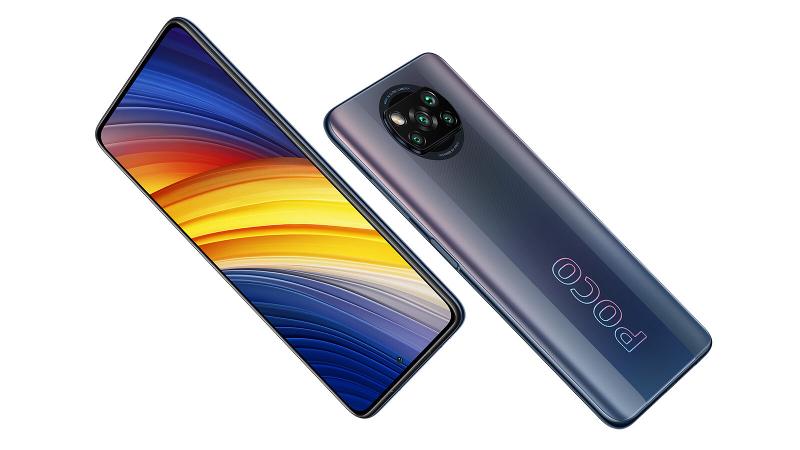 The biggest change is to the chipset: instead of the Snapdragon 732G, the X3 Pro runs on the brand-new, custom-designed Snapdragon 860. This is essentially an overclocked version of the 2019 flagship Snapdragon 855.

Like the 732G, and the 855, the 860 is still a 4G chip. But by using former flagship architecture it’s now the most powerful 4G phone chip on the market. Assuming it delivers slightly stronger performance than the 855 – which it should, with the Kryo 485 CPU now clocked to hit 2.96GHz at peak performance – this should deliver a roughly 50% CPU performance improvement on the X3 NFC.

It’s paired with higher RAM and storage options – 6GB+128GB, and 8GB+526GB – which should help maximise the performance of the new chipset. The storage used is also the faster UFS 3.1 standard.

The camera spec has also changed, though not by much. The only changes are to the main two rear lenses: the main shooter drops from 64Mp to a smaller 48Mp sensor, though the slightly larger f/1.79 aperture should help offset some of that. It’s a similar story on the ultrawide, which is down from 13Mp to 8Mp, though the aperture remains unchanged here. The other lenses, including the selfie camera, are the same as before.

Elsewhere, things have changed less. The Pro has the same 6.67in, 120Hz LCD display (with the small upgrade to Gorilla Glass 6, from 5); the same weight and dimensions; and the same 33W charging and 5160mAh battery as the X3 NFC – though note that this means a smaller battery than India’s non-NFC model. Though, yes, the Pro does support NFC too, since you asked. 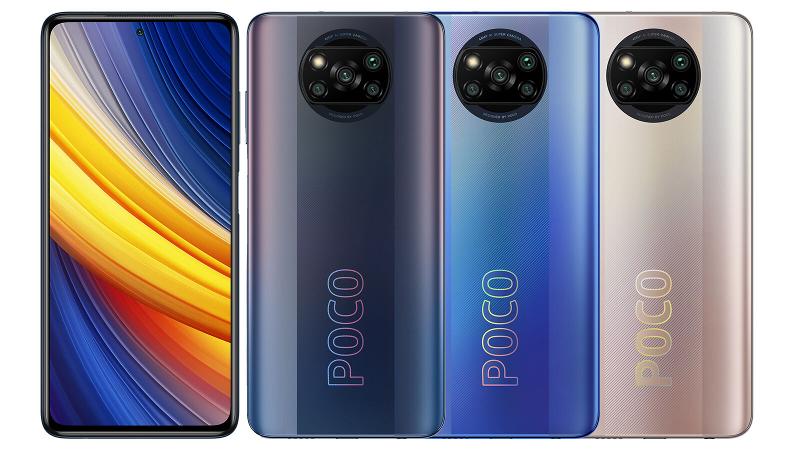 If you want to know what we think about the X3 Pro, check out our discussion of it and the Poco F3 in our Fast Charge podcast: