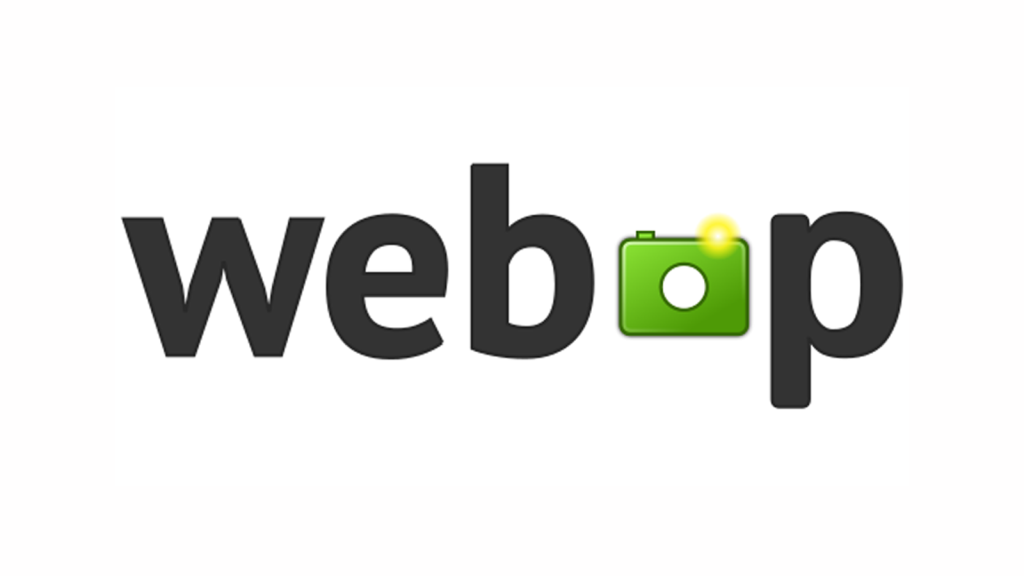 When saving images from the web you may have encountered a strange file format called WebP. This is one developed by Google and while it may have the convenience of making images smaller, the downside is that not all applications accept it, with Photoshop being a prime example.

So, how can you easily convert a WebP file to a more usable format like JPG or PNG? Here are a few simple ways.

WebP is an open source image format that was introduced by Google back in 2010. The idea was to compress images files so that they required less bandwidth and thus made web pages quicker to load. It’s a good idea, in principle, and has found favour with the majority of browsers over the last decade.

The only significant holdouts have been Internet Explorer and Safari for Mac, but even Apple is now opening its arms to Google’s initiative, with the format expected to be included in version 14 of Safari when it’s released in the latter half of 2020.

How do I stop my browser showing WebP files?

This isn’t really possible to do, as most browsers now support the format and use it as standard when rendering images. There is a secret weapon in your arsenal though, and that’s Internet Explorer – so long as you’re using a PC or laptop, of course.

While the product has been phased out in favour of Microsoft’s Edge browser, it can still be used to render non-WebP images and should do in perpetuity as there are no new versions or features planned.

Simply open the web page containing the image you want to use, right click on the image itself, then choose Save picture as… and select the folder where you want it stored.

This won’t work though if the site has only created WebP images in the first place, then all you’ll see is a gap where the image should be on the page. Also, if you’re using Internet Explorer 10 or earlier, just remember that these versions haven’t had security patches for some time now, so it isn’t a great idea to use them: we recommend using up-to-date antivirus software to help protect your devices.

Another option is to fire up Microsoft Paint, which should be lurking on your hard drive somewhere, then use it to open the image, select Save and choose either JPG, PNG or whichever format you prefer from the drop-down menu entitled Save as type. To finish the process click the Save button. 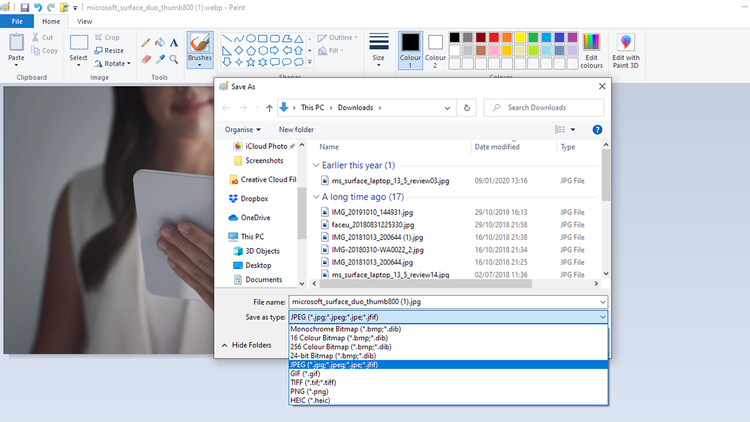 How to convert WebP images to JPG or PNG in Photoshop

At the time of writing, Photoshop doesn’t support WebP files, but this could easily change in the future. Until then, if you really want to work with those images you can use a free plug-in that makes it a possibility.

WebPShop is available on the Google Developers site, with versions for both Windows and Mac, along with instructions on how to add it to your system.

If you don’t want to fiddle around with Paint or Internet Explorer, you can avail yourself of the many online conversion services that will do the work for you. Google online image conversion and you’ll be presented with a huge amount of choice, most of which do the job for free.

One option is Online Convert, as it also has a plug-in for Firefox and Chrome that allows you to use the service directly from the browser menu.

All you need to do for a standard conversion is go to the site, select which format you want, then upload the file and click Start Conversion. The whole process only takes a few seconds and the image is automatically downloaded afterwards. 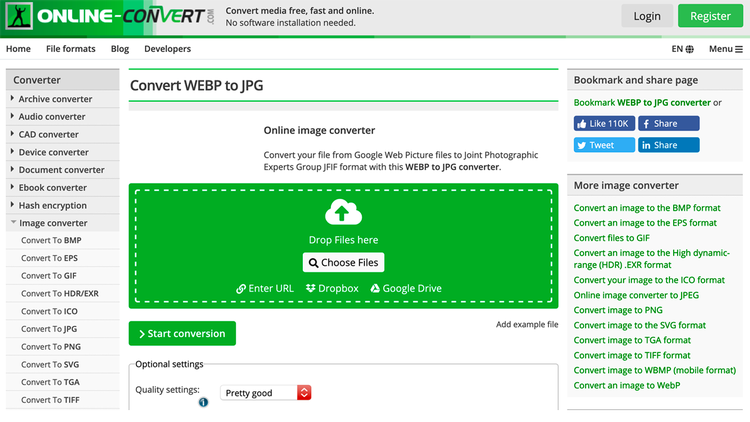 If you want to convert images larger than 100MB or more than 20 in a single day, you’ll need to sign up to the Premium service which also comes with the ability to convert more than the standard 5 images at once. A 24-hour pass costs €7, which is around £6/$8 depending on the currency values at the time.

For more ways to tinker with your images, take a look at our guide to the best free or cheap photo editing software.