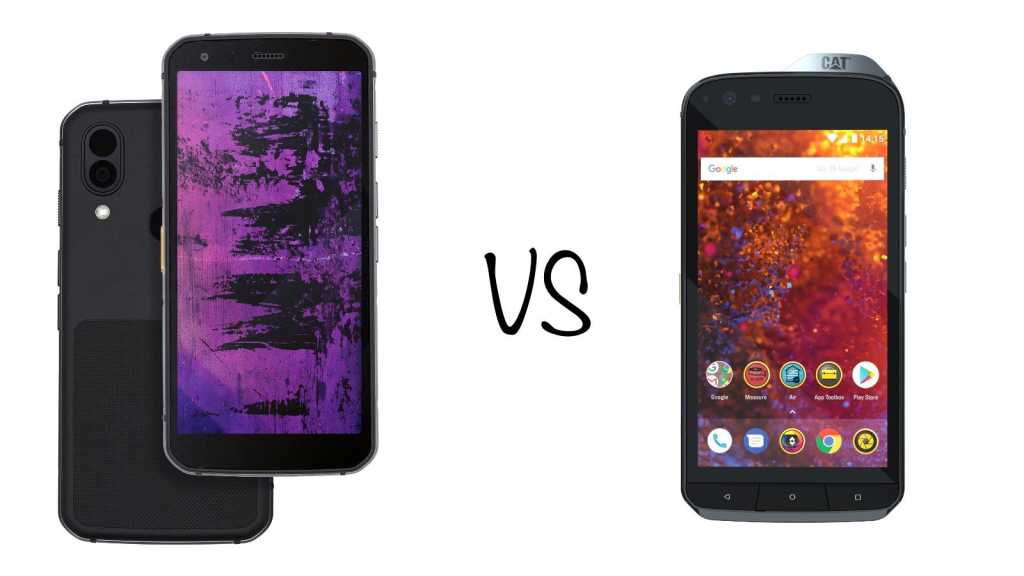 Cat has just revealed the successor to 2018’s Cat S61, the Cat S62 Pro. It offers huge improvements over its predecessor, including the FLIR Lepton 3.5 thermal imaging camera that captures 4x the pixels of the S61, a larger display and a cheaper price tag, but with the omission of one or two features present on the older model, it’s not a cut-and-dry upgrade.

Here, we break down all key differences between the Cat S62 Pro and Cat S61, including durability, thermal imaging technology, performance and more. For more on Cat’s latest rugged phone, take a look at the latest Cat S62 Pro news.

The biggest draw of the Cat 60 series is undoubtedly the rugged design, offering a much more durable smartphone than standard alternatives available in 2020, ideal for builders and those working on construction sites and the more clumsy of us.

While both the S61 and S62 Pro are both incredibly durable smartphones, the S62 Pro is undoubtedly more refined in terms of design – it doesn’t look as industrial as its predecessor, finally ditching the metal notch at the top of the smartphone and employing a more nuanced design, shaving 1mm off the thickness of the phone.

That doesn’t mean there’s a compromise on overall durability, though: it offers the same IP68 water- and dust-proofing as the S61, and actually boasts a better mil-spec rating at 810H, compared to 810G of its predecessor. It’ll survive 1.8m drops onto steel, as has been tested by Cat, and it can even be washed with soaps and disinfectants, or with alcohol wipes – ideal for keeping your smartphone clean in the midst of the Coronavirus pandemic. 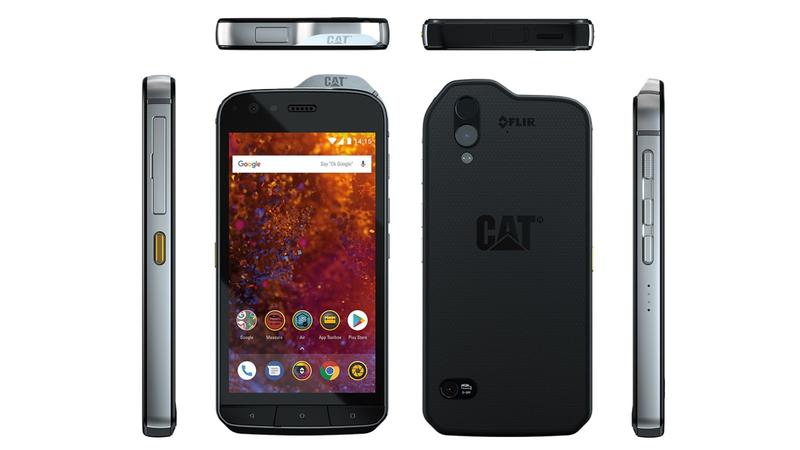 Cat S61 from all angles

The main highlight of the Cat 60 series has to be the FLIR thermal imaging technology, allowing professionals access to high-end kit in a portable, affordable package. The Cat S61 offered a handful of improvements compared to the original S60 from 2015, but the jump from the S61 to the S62 Pro is much more noticeable.

The company worked with FLIR to integrate the Lepton 3.5 thermal imaging camera into the Cat S62 Pro, offering a huge increase in resolution. In fact, Cat claims that the S62 Pro captures four times as many pixels as the S61 (20,000 compared to 5,000), allowing for more precise, detailed thermal imaging, and it opens up the door for new thermal technology too.

The FLIR camera has been moved down in the S62 Pro, removing the notch

VividIR uses FLIR’s smarts to automatically enhance any thermal image taken on the Cat S62 Pro for a more clear end result, while the MSX technology uses the standard camera to overlay an outline of the real world on a thermal image. Alpha blending, on the other hand, allows you to combine thermal detail from the FLIR camera with the standard camera, with on-screen controls to adjust the balance between the two.

There are also more advanced analytic and reporting features available on the S62 Pro, like Isotherm and isotherm alarming, minimum and maximum temperature flag indicators and even PDF report generation. Oh, and for the first time, the phone will store all thermal data within each image taken, allowing you to retrospectively check the temperature or any other recorded parameter via the Gallery app.

Two of the more interesting additions to the Cat S61 were an air quality monitor and a laser-assisted distance measure. The former allowed users to take measurements of the air and alert them to any potential health and safety hazards, while the latter allowed professionals on the job to get quick and accurate measurements without the need for additional equipment.

The idea behind the new technology was to make the Cat S61 a handier tool for builders, electricians and the like – the problem is that it also ramped up the price by £200, and that’s something that consumers didn’t appreciate, and that led to a dip in sales according to Cat. 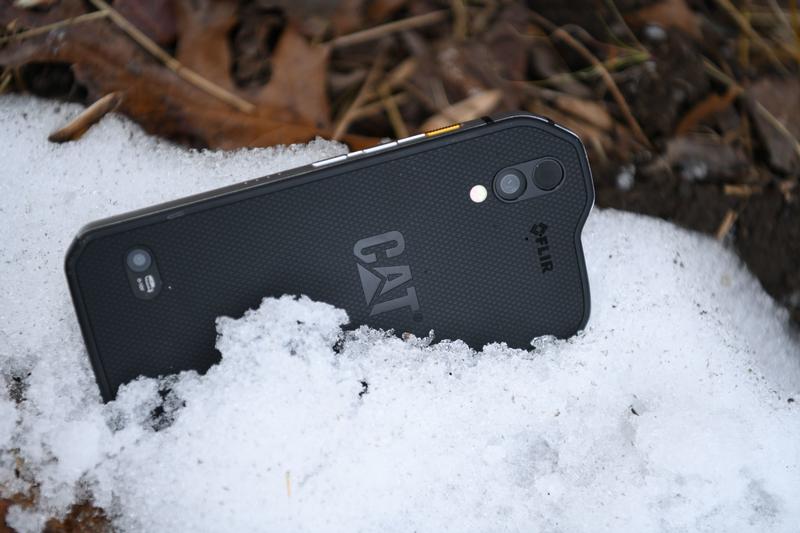 That’s why, simply put, Cat decided to remove them in the Cat S62 Pro. The features are arguably not the main draw of the S60 series regardless, and it allowed Cat to reduce the price back to the original £599 price tag of the incredibly popular Cat S60 – but more on pricing later.

The Cat S60 range isn’t designed to offer the same blistering speeds as the flagship smartphones in 2020, and that’s reflected in the internals. For reference, 2018’s Cat S61 featured a Snapdragon 630 alongside 4GB of RAM and 64GB of storage – a pretty standard mid-range offering for the time.

The Cat S62 Pro features an upgraded Snapdragon 660 alongside an increased 6GB of RAM and 128GB of storage. That’s not the most impressive SoC upgrade, considering the Snapdragon 765 is available in most mid-range smartphones in 2020, and Cat is aware, but there’s apparent method behind the madness.

According to Cat, the Snapdragon 660 is one of Qualcomm’s long-termers, providing security updates for the chipset for 10 years, and that allows Cat to guarantee three years worth of security patches with the S62 Pro, alongside one complete OS upgrade, from Android 10 to Android 11. That’s perfect for working professionals, as it should keep your smartphone safe from Android-based malware that could appear in future, although it certainly won’t be as fast as the likes of the Motorola Edge. 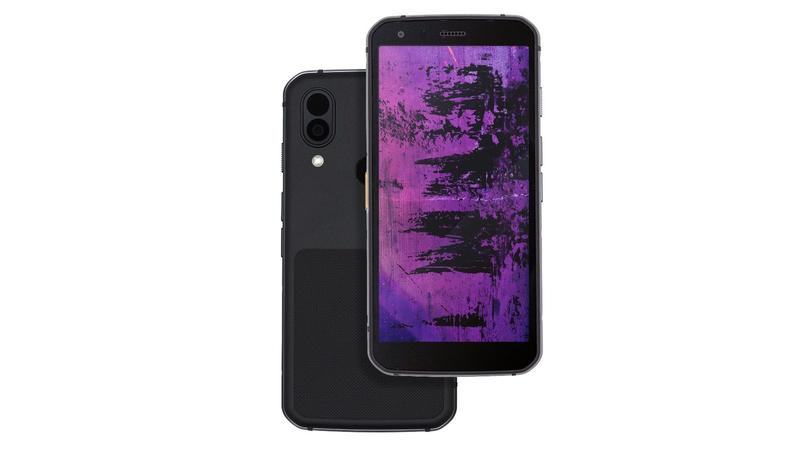 The Cat S61 has an RRP of £799/$749, but it’s currently available for as little as £669/$649 from Amazon. It represented a huge increase compared to the £599 Cat S60 in the UK, which the company now regards as the sweet spot for its rugged smartphone range.

With that in mind, the Cat S62 Pro costs £599/$749 and is set to go up for pre-order in August 2020. It undoubtedly offers great value for money compared to its predecessor, despite the removal of niche features like an air quality monitor and laser-assisted distance measure.

Of course, spec-wise, it can’t hold a candle up to the top smartphones in 2020, but that’s not the point: the Cat S62 Pro is a smartphone that’ll survive more punishment than most smartphones on the market. You couldn’t drop your iPhone 11 from 1.8m onto steel and expect it to come away unscathed, after all.

The Cat S62 Pro offers significant upgrades over its predecessor, including an improved mil-spec rating, while also slimming down the dimensions of the smartphone. There’s a larger display, a new FLIR Lepton 3.5 thermal imaging camera that provides 4x the detail when capturing thermal images and new shooting modes, along with smaller much-requested features like automatic PDF report generation and the ability to capture all thermal data within images to retrospectively analyse the thermals.

It’s not a cut-and-dry upgrade compared to the more expensive S61, with a laser-assisted distance measure and an air quality filter that could prove invaluable for builders and the like available on the older model, but with a £200 drop in the UK, it’ll certainly tempt the majority of rugged smartphone fans.