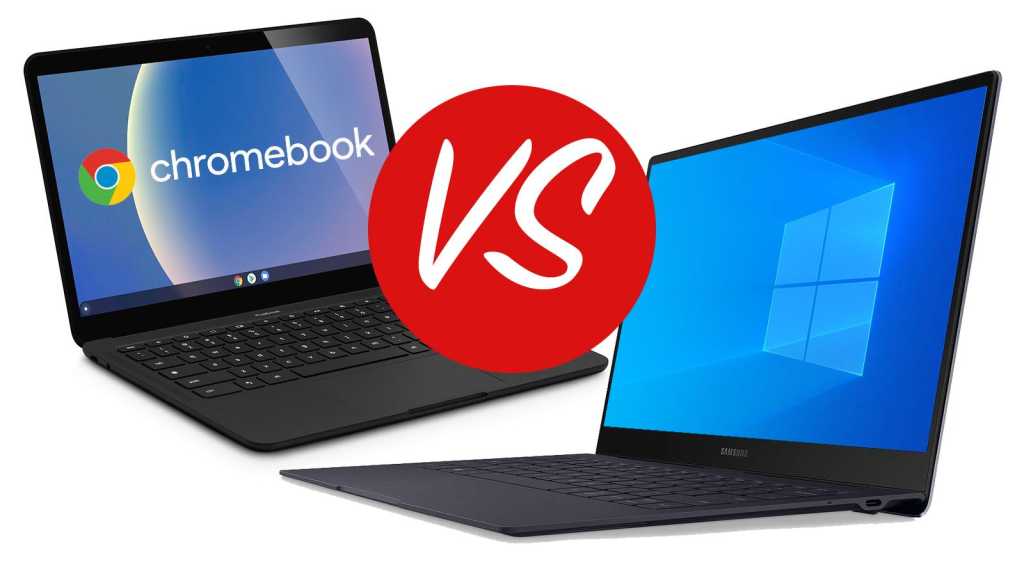 If you’re considering buying a new laptop, you may have noticed that there are three main types available. These are those which run Windows 10, Apple MacBooks and a third option called Chromebooks, which run Google’s Chrome operating system.

Chromebooks can be a lot cheaper and over the last few years have grown in popularity for home, office and classroom use. So, what is a Chromebook? And should you buy one instead of a Windows PC?

What is a Chromebook?

A Chromebook is very similar to a Windows laptop. They both have keyboards, trackpads, displays, ports to plug in accessories, some have touchscreens and all can access the internet with their browsers and run a wide range of popular apps.

What separates them is that they have different operating systems underneath. Windows PCs run on Windows 10, while Chromebooks run on Google’s ChromeOS.

Is this a big deal? For most people for most of the time, no. In fact, you may not even notice the difference.

ChromeOS is very much like having the Chrome browser as your entire operating system. And when you think about it, for the vast majority of time that most of us are on our laptops (at least for personal rather than professional use) we have the browser open and are accessing the internet for shopping, social media, video-calling, streaming music, TV or movies, email or even to work on documents.

Of course, there are pros and cons for both Chromebooks and Windows PC, which we’ll address below.

Can a Chromebook run Microsoft Office?

One of the first questions that we’re often asked is whether Chromebooks can run Microsoft Word, Excel and the like? They most definitely can, but not the full versions that you can get on Windows computers.

There are two main options when it comes to Chromebook apps: the Google Chrome Store or Android apps.

Both will allow you to create, read and apply basic edits to documents, spreadsheets and presentations. This means you can collaborate with work-colleagues who use Word or Excel, plus it’s useful for younger ones who need those formats for their homework assignments. One thing to note, the Android version of OneDrive is not currently supported on Chromebooks.

Should you just require a word processor, spreadsheet editor and presentation tools, Google’s own office apps (Docs, Sheets, Slides) are tailor-made for Chromebooks, offer excellent features, and are widely used by businesses too. You can use them for free, too.

Can a Chromebook run Windows?

No. ChromeOS is the operating system for Chromebooks and there’s no way to use Windows instead. You can run Linux though, and it has become a popular option in some circles, but this is more of an advanced approach that we wouldn’t recommend to most users.

Why do Chromebooks have so little storage?

One thing you’ll notice when comparing Chromebooks to Windows PCs is that the former usually has a much smaller hard disk or SSD than the latter. This is due to the fact that ChromeOS is very lightweight, so you don’t need the 20GB or so required by Windows 10, but also because most apps are intended to be used in the cloud.

This means that your data is stored on Google Drive or other online services, diminishing the need for local storage for apps and files.

If you like to store all of your photos or music on your PC, then this could cause issues, as the standard 32GB or 64GB of onboard space offered by most Chromebooks might not be enough.

You can use an external USB drive though, which has the added benefit of allowing you to move your music library to any computer of your choice just by plugging it in, although this is an additional purchase.

As a rule, Chromebooks are usually cheaper than their Windows counterparts, as they don’t need the same level of hardware and components to deliver fast performance. There are exceptions though, with Google’s own Pixelbook starting at around £1000/$1000.

For that kind of money, we’d be very hesitant to take a Chromebook over something like the Dell XPS 13 or Microsoft Surface Laptop 3, both of which offer far more versatility.

Will a Chromebook work with my Android phone?

Yes, and due to the fact that Google makes the operating system for both devices, they will be able to share files easily, send and receive text messages from the Chromebook, unlock each other when nearby (saving you typing in your password or passcode), and generally play nicely together.

Will a Chromebook work with my iPhone?

Not in the same way as Android. You can connect your iPhone to a Chromebook using a USB cable, thus allowing you to transfer photos or videos, but you won’t benefit from the other features mentioned above.

Of course, Google Photos and Google Drive apps make it seamless to keep your photos and files in sync or you can even log into iCloud.com to access your email, contacts, photos, calendar, notes and more.

Can I use a Chromebook offline?

When Chromebooks were first introduced, the idea behind them was that you’d always use them online. Over time this has changed, so that today you’ll find many apps that work even when you’re not connected to Wi-Fi.

Google Docs is a prime example, as it allows you create and edit documents on your hard drive and then have the changes sync once you’re back online. The Google Play Store has a section for apps that can be used offline and many of the Android apps can also work when away from the net.

Obviously, apps that are installed on a Windows PC can usually work independent of a Wi-Fi connection, but for most things these days you’ll also want to be online to save things to the cloud or access anything internet related.

In the past the Windows PC would have been the clear winner here, and still for something it is, but Chromebooks have closed the gap especially if you tether it to your Android phone or iPhone.

Can I use Windows apps on Chromebooks?

You can’t directly install Windows apps on Chromebooks, but many do have web-based versions or equivalents. For example, the aforementioned Microsoft Office is available with reduced features on a Chromebook, while the Google Office suite is a great alternative.

Photoshop is another that has a web-based clones, but if you want to seriously edit photos then the full version on a Windows PC is the one to choose. The same goes for video-editing, audio-editing or any serious gaming.

Naturally, you’ll need a powerful Windows PC to run this type of software, so if you’re comparing the models found in our best budget laptop chart you’ll need to take this into account.

If you’re reliant on certain software, it would be a good idea to check whether there is a web version or if it’s available on Android or ChromeOS, as there’s no way to use it otherwise, which could make a Chromebook the wrong choice.

Can I play Windows games on Chromebooks?

No. Chromebooks are usually built for light duties such as surfing the web, writing documents, video-calling friends and similar stuff. Gaming, especially FPS titles with high-res graphics, are not really intended for this platform.

Saying that, you can use Android games on Chromebooks, and as many have touchscreens and can fold into tablet mode you’ll find that they make a decent stab at it. For casual players this might be the ticket, but if you want access to Steam and all the splendours of PC gaming, a Windows gaming PC is unbeatable.

Do Chromebooks get viruses?

That’s not to say that users of a Chromebook are impervious to attack, as you’re still able to click on links in random emails and be taken to dodgy sites or fooled by urgent pleas for help from friends on social media when really it’s a hacker who has accessed their accounts.

If you’re online, you’re vulnerable, so take the time to research how to stay safe online before relying too much on the protection offered by your tech.

Can I video call my friends on a Chromebook?

These days, video calling is something of a prerequisite when considering a computer. Most of the main services are available on a Chromebook, including Zoom, Google Hangouts, and Skype, although FaceTime users will find that Apple only allows this feature on its own products.

There are some compromises along the way, for instance you can’t record calls on Zoom, but if you’re looking for simple ways to keep in touch with friends, a Chromebook or Windows 10 laptop will make it happen.

Should I buy a Windows PC or Chromebook?

Like with all technology, the key question to consider when buying a product is what you intend to do with it?

If you want fully featured apps, compatibility with nearly all software, and the ability to use all of these offline, a Windows laptop is going to tick those boxes. Gaming is the same, although you’ll need to ensure that the PC is capable of handling the modern titles, which will significantly increase the price.

Chromebooks are simple, easy to use, and can get a hell of a lot done. If you spend the majority of your time online and don’t need specific software, then you may find them a great option.

For social media, shopping, streaming Netflix, YouTube and similar services, catching up on email, writing documents and other light daily duties, they are easy to recommend. Of course, Windows laptops can do all those too, so in the end it’s down to how you want to use your tech and how much you want to pay in the process.

To see which Chromebooks we currently deem worthy of your cash, read our best Chromebook roundup and for Windows PCs you can check out best laptops.