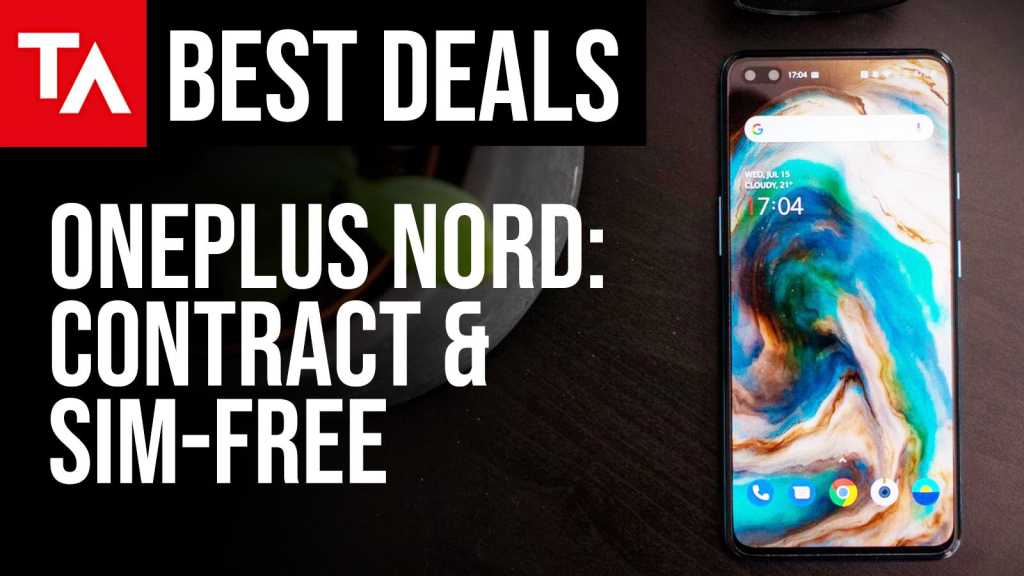 The OnePlus Nord went on sale in August 2020 and promptly became the king of mid-range phones.

The 5G handset combines an excellent 6.44in Full HD+ AMOLED+ display and a superb 48Mp main camera with ever-impressive Oxygen OS 10.5 software – all for a humble asking price of £379. On the inside, OnePlus packs a Qualcomm Snapdragon 765G chipset and a 4115mAh battery with 30W fast charging. It’s no wonder our Deputy Editor Dominic Preston called the Nord “the best mid-range phone in the world right now” in his 5/5 star review of the phone.

Here, we’re tracking the best OnePlus Nord Christmas deals both SIM-free and contract deals. For those after the Nord’s budget siblings, we’re separately looking at where to buy the N10 5G here and the N100 here.

How much does the OnePlus Nord cost?

The OnePlus Nord phones are available at two price-points depending on the configuration you choose. In the UK and Europe, the prices are as follows:

Both models are available in Blue Marble or Gray Onyx. Keep the phones protected with these protective cases.

The phone is available across Europe as well, but isn’t available in the US.

OnePlus heavily undercuts competitors at this pricing by offering premium quality specs well under £500 – undeniably threatening the flagship model of paying upwards of £1,000 for slightly better performance. Read the full review where it received a full five stars.

While you don’t get the Snapdragon 865 processor found in phones like the Galaxy S20 range or even OnePlus’s own OnePlus 8/8 Pro phones – you get a 765G processor instead – the Nord phones tick off a long list of impressive features, such as a 90Hz AMOLED display, a 48Mp-led quad-camera set-up, a huge 4115mAh battery, and 30W fast charging.

Best OnePlus Nord SIM-free Christmas deals – Up to £70 off

OnePlus kicked off its 7th anniversary sale and is slashing 7% off its popular handsets to celebrate – and the Nord is included with £32.83 off the 12GB RAM/256GB storage option. However, the better deal around is from Laptops Direct where the Nord is available for just 399, slashing £70 off the RRP:

These prices outdo both Amazon and John Lewis, the only other retailers in the UK that sell the OnePlus Nord.

You can, however, have the Nord shipped from China (free to the UK) if you buy via Gearbest, where the Nord 12GB/256GB is available for £398.78, but you may have to wait up to 60 business days for it to be delivered.

O2 announced on 6 November that it would start offering the OnePlus Nord on contract, making it the only other network provider other than Three to sell the Nord. Plans at O2 start at £20 upfront and £25.70 per month for 2GB of data (36 months). See them all here.

Three has the better deal, however: you can get the OnePlus Nord with 12GB data for £25 per month with no upfront cost on a 2-year term. Check out all Three contract plans on the OnePlus Nord.

Three was previously the exclusive network offering the original Nord.

You can also save on the main OnePlus Nord phone when you trade in your existing phone. If you’re already a OnePlus owner, you can receive up to £270 off if you trade in an unlocked OnePlus 7T Pro (256GB), while even old models like the OnePlus 1 gets up to £10 off.

OnePlus accepts phones from other manufacturers too including Apple, Samsung, Huawei, Sony, Nokia, and Xiaomi.

How to trade-in with OnePlus

You can find OnePlus’s trade-in option on the Nord landing page.

Purchases from Amazon also qualify for trade-in discounts worth up to £400, which is considerable more than OnePlus’s discount. Just make sure to have your EMEI number handy. Get a valuation on your old device from Amazon here.

OnePlus student discount – up 10% off

OnePlus offers discounts on any orders to students over the age of 18 and staff members. This includes 10% off gear and accessories and 5% off devices – which means you could pick up the Nord for as low as £360. The discount is valid for a year.

To get the discount, verify your student status either by signing up for a OnePlus account with an educational email address or via Student Beans.