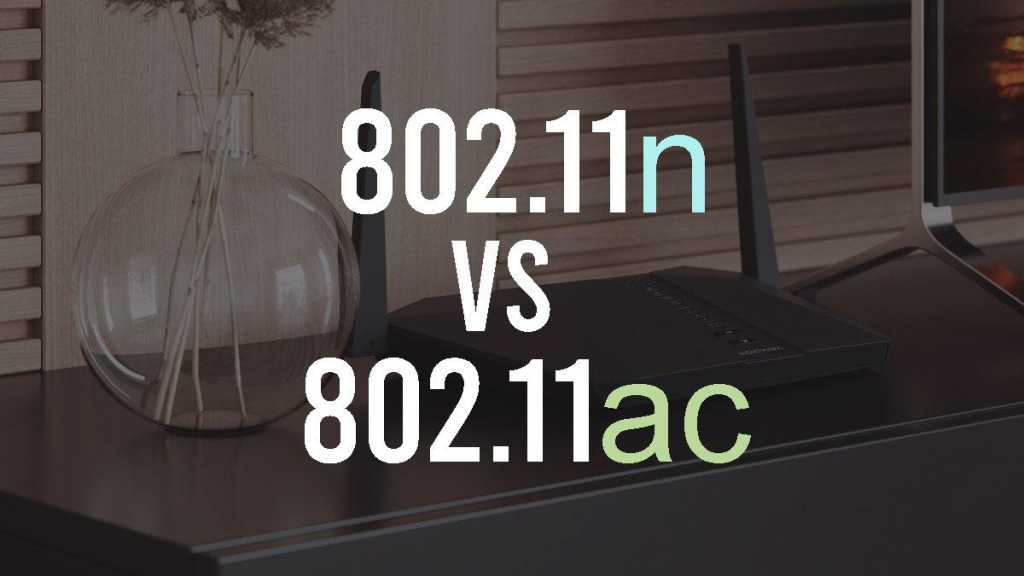 Wi-Fi is both a blessing and a curse. We’re forced to use it on our phones, tablets and any other connected device that doesn’t have an Ethernet socket. It’s great because it means your phone or laptop is truly wireless, but it’s far from reliable and can be slower than a stable, wired connection.

If you’re having problems and are considering upgrading your router or are simply curious to know what the numbers and letters all mean, then allow us to explain.

These cumbersome designations are different generations of Wi-Fi, with 802.11n being the older standard and 802.11ac being the newer.

But there’s a newer one still: Wi-Fi 6. Yes, the Wi-Fi Alliance has finally woken up and realised that a simpler naming strategy is a good idea.

Unfortunately, Wi-Fi – like most network technology – is really complicated. However, the simple answer is this: 802.11ac is faster than 802.11n.

802.11n is ok if you have just a few devices connecting to a router. But if you have lots of Wi-Fi gadgets and a family where each person has a phone and a tablet, you’ll have a better experience with 802.11ac.

Although the speeds listed above are theoretical, they do illustrate that 802.11ac is a lot faster and that’s always a good thing.

What you have to bear in mind is that Wi-Fi speed is dependent on lots of factors including: distance of your device from the router, the obstacles (such as walls, doors, floors) in between and any interference from other, competing Wi-Fi networks and other devices.

So the real-world speed will vary according to your circumstances.

Also, remember that both devices: your router / hotspot and whichever Wi-Fi device is connected to it, such as your phone, need to support the same Wi-Fi standard.

Well, now you’re asking. We’ll keep this short and sweet, because it gets boring very quickly.

802.11n routers arrived on shelves in late 2009, and it was the first Wi-Fi standard that used multiple antennas to send and receive data. That was shortened to MIMO (multiple in, multiple out).

Of course, the speed on offer depends how many antennae a router has. Each one can operate at 150Mbps, so a so-called 3×3 router could offer a 450Mbps to a supported device – which must also have the same number of antennae.

The other thing to know about 802.11n is that it could operate on 2.4GHz and 5GHz. Not all 802.11n routers included 5GHz support, and even some of those that did could use only one or other, not both simultaneously.

These days, though, all routers provide Wi-Fi on both ‘bands’ and usually combine them into one network name (SSID) so you don’t have to choose which frequency: it will pick the best one automatically and switch between them.

In 2016, Wave 2 devices started appearing. These supported a new standard called MU-MIMO which, at a basic level, allowed the router to communicate with up to four devices simultaneously.

While you might think all routers do this: they don’t. What actually happens is that they communicate with one device at a time, then another, then another. It all happens so quickly that it has the appearance of simultaneous operation, much like a video which appears to be a continuous moving image but is in fact created from individual still images displayed at 24 per second (or more).

Again, though, to take advantage of MU-MIMO you need phones, tablets, laptops or other devices which also support Wave 2 802.11ac.

802.11ac introduced some other features including beamforming, which is a clever technique that ‘focuses’ the Wi-Fi signal in a specific direction, i.e. to where your device is.

If your reason for reading this is to understand which router to buy, then a modern 802.1ac router is not a bad choice at all, especially if you’re not spending much money (under £80  / $80).

However, the most efficient way to spend money if you want Wi-Fi around your home is to opt for not one router, but three. This is possible with mesh Wi-Fi kits, which start at about £60 /$70 and run into the hundreds.

Find out more in our guide to the best mesh Wi-Fi systems.

You might also know that Wi-Fi 6 is coming. It’s expected that the standard will be finalised by the end of 2020 but, as with all generations of Wi-Fi, there are always devices available well before the official sign off.

Routers are surprisingly few and far between: there are lots of phones that have it including the iPhone 11, Galaxy S20 and OnePlus 8.

If you own one or more device with Wi-Fi 6, it can be worth investing in a router, but if not (or even if you do) 802.11ac is still going to cope for a good few years to come.