It’s been two years since we last had a Far Cry game, so it should be no surprise to hear that Far Cry 6 is on the way.

Not only will it be the first Far Cry game on next-gen consoles, it will also include Breaking Bad star Giancarlo Esposito as the main villain, a Central American dictator keen to keep a tight grip around his country’s people.

When does Far Cry 6 come out?

Far Cry 6 is available to pre-order it now, but technically it doesn’t have a release date. It was set to launch in February 2021, but has now been indefinitely delayed “to allow us to make this the game you aspire to play while focusing on the well-being of our teams,” a statement that feels like a knowing nod to Cyberpunk 2077‘s well-publicised use of crunch to get the game out the door.

Microsoft might have accidentally revealed the updated release date though. The game’s Xbox store page briefly listed a release date of 26 May 2021 – though has since been changed back to the original planned date of 18 February. Microsoft’s storefront has previously been an accurate source of leaks for Star Wars Squadrons and other games, so for now May looks likely – though we’ll have to wait a while longer for official confirmation.

Check out our full guide to other upcoming games in the meantime.

The game will launch across generations, meaning we’ll see it on PS4, PS5, Xbox One, Xbox Series X, PC, Stadia, and Amazon Luna. 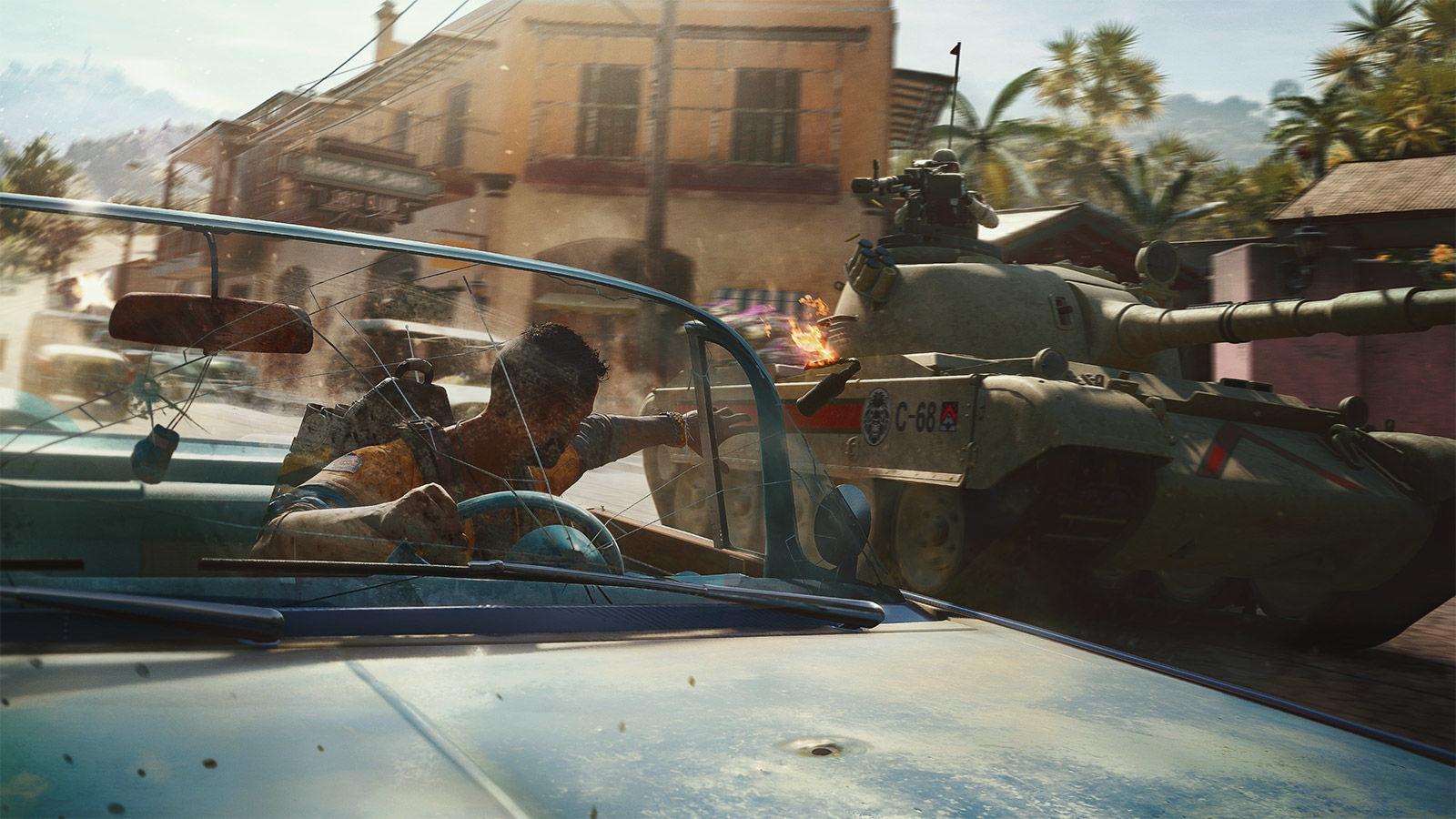 Anyone who buys a copy for PS4 or Xbox One will also get a free upgrade to the corresponding next-gen version.

Which version of Far Cry 6 to pre-order

This is an Ubisoft game, so it probably won’t come as a surprise that you get a choice of versions to pre-order.

First up, anyone who pre-orders the game will get a Discos Locos disc launch and Libertad Chorizo dog…companion…thing… for free. 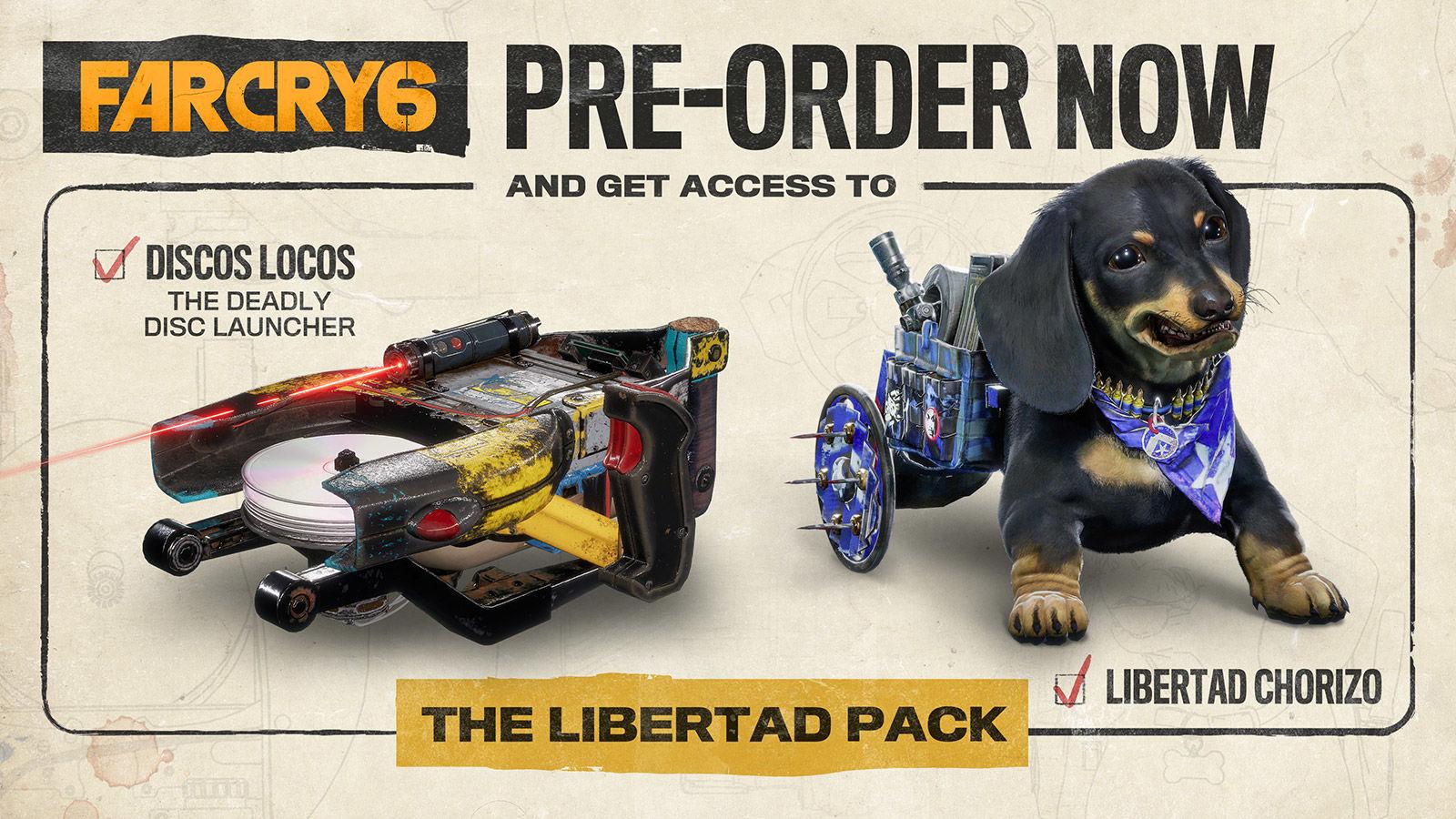 The Standard Edition of the game is £59.99/$59.99 and includes the game itself, along with those pre-order bonuses.

The Gold Edition is £84.99/$99.99, and includes all of the above plus the game’s Season Pass, which includes three DLC packs.

The Ultimate Edition jumps up again to £99.99/$119.99, and has all of the above plus the Ultimate Pack, an additional set of outfits, weapons, and cosmetics split into the Vice, Croc Hunter, and Jungle Expedition packs.

Finally, the Collector’s Edition is only available through the Ubisoft store. It costs £179.99/$199.99 and has all of the above plus a load of physical goodies including a map, keyring, artbook, and ridiculous flamethrower replica. 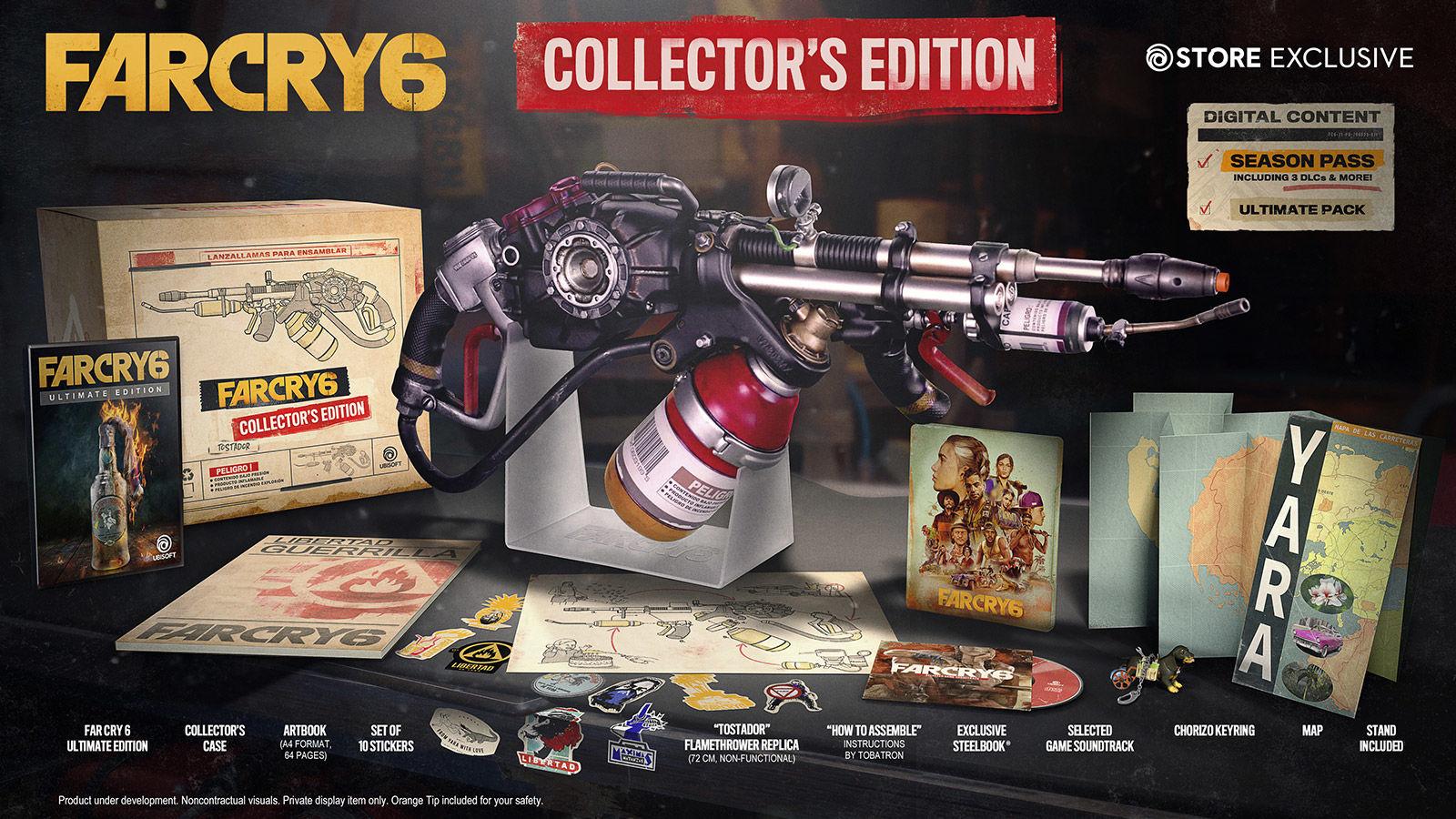 There’s one trailer for Far Cry 6 so far, and it’s a slick cinematic showing off the setting, main villain Anton, and his son Diego:

Beyond that we also have the ‘cinematic title sequence’, an HBO-esque intro to the game:

What to expect from Far Cry 6 gameplay

Ubisoft hasn’t shown us a detailed look at Far Cry 6’s gameplay, so we don’t have a lot to go on – but realistically you can expect it to follow closely in the footsteps of the previous games.

With that in mind expect a giant open world (Ubisoft says it’s the biggest Far Cry to date) in which you’ll find umpteen collectibles, side missions, enemy encampments, wildlife, and more. 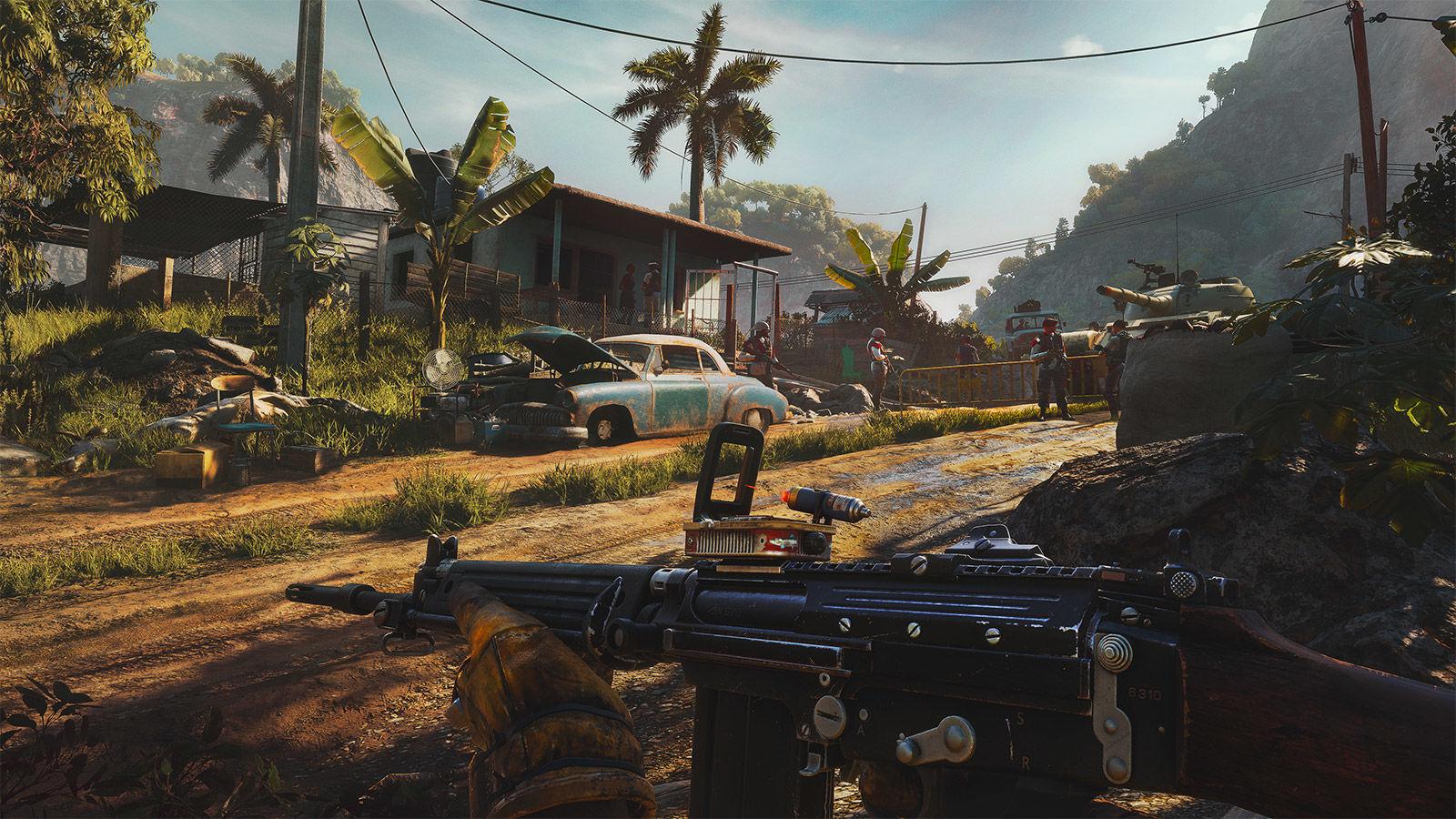 Far Cry games tend to combine stealth with shooting, encouraging you to sneak through enemies as much as possible before letting loose – though of course one of the series’ hallmarks is that you can approach most encounters however you’d like.

This time around the game is set in Yara, a fictional Central American island loosely based on Cuba. It’s led by Anton (Esposito), who is positioning his young son Diego to take up his mantle as dictator-in-chief.

You’ll play as Dani Rojas, a Yaran local who becomes a guerilla freedom fighter. You’ll have to fight Anton’s troops both in the capital city of Esperanza and in smaller villages, beaches, and jungles across the island. 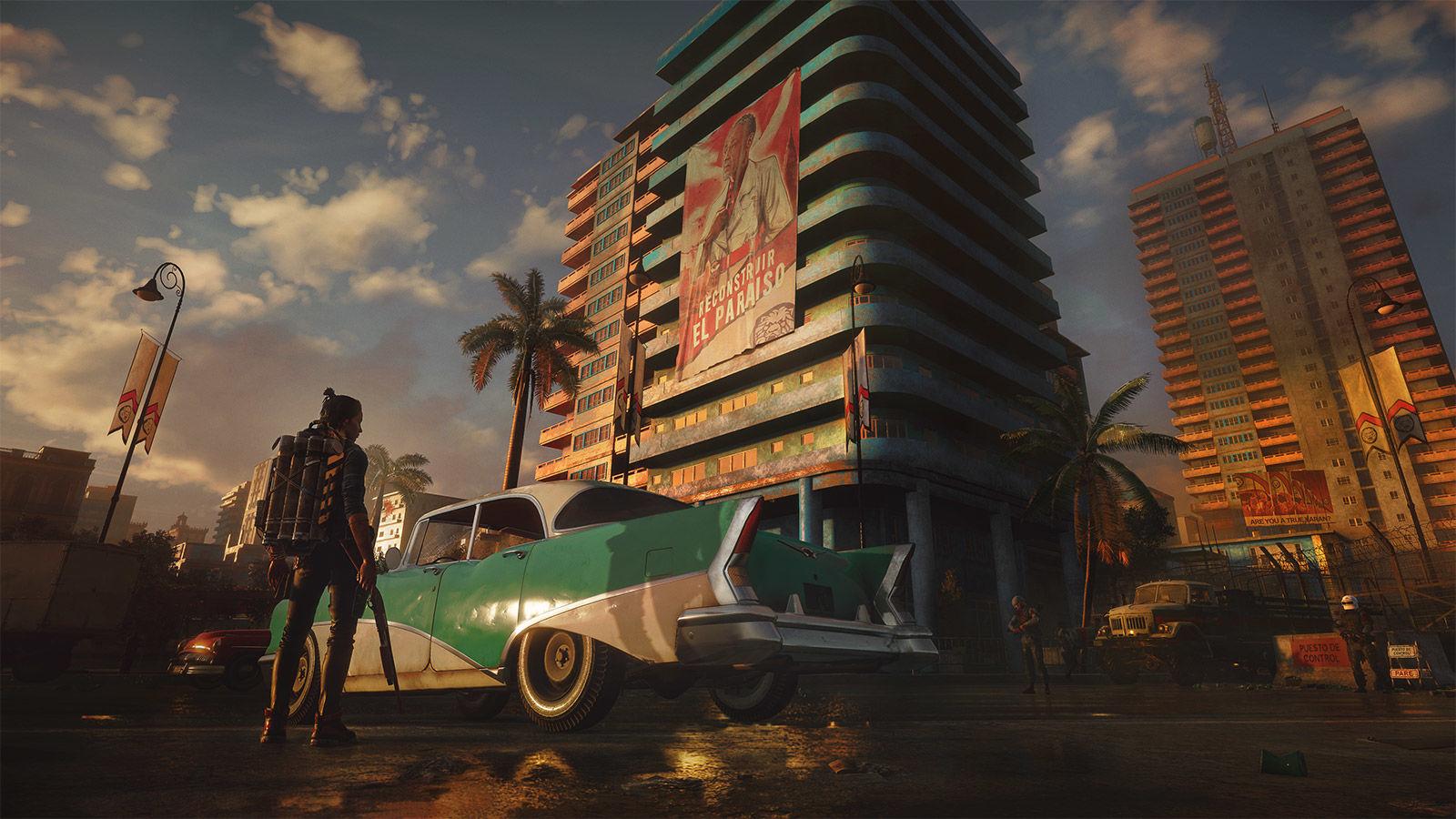 One of the most popular rumours about Far Cry 6 is that it’s secretly a prequel to the popular Far Cry 3.

That’s mostly based on the design of the young villain Diego, who has an eyebrow scar that’s remarkably similar to that of Far Cry 3 villain Vaas.

So. Is Diego in Far Cry 6 meant to be a young Vaas from Far Cry 3? pic.twitter.com/4trOhRtEhy

Ubisoft hasn’t confirmed what year the new game is set in, but the vaguely ‘80s aesthetic has added fuel to the fire of speculation that Diego will grown into the unhinged antagonist of Far Cry 3 – the game that really kicked off the modern Far Cry series.

On the other hand, details we were given about Vaas in Far Cry 3 suggest that he was born and grew up in the Rook Islands where that game is set, so this would require some clever writing or a few retcons to line everything up. 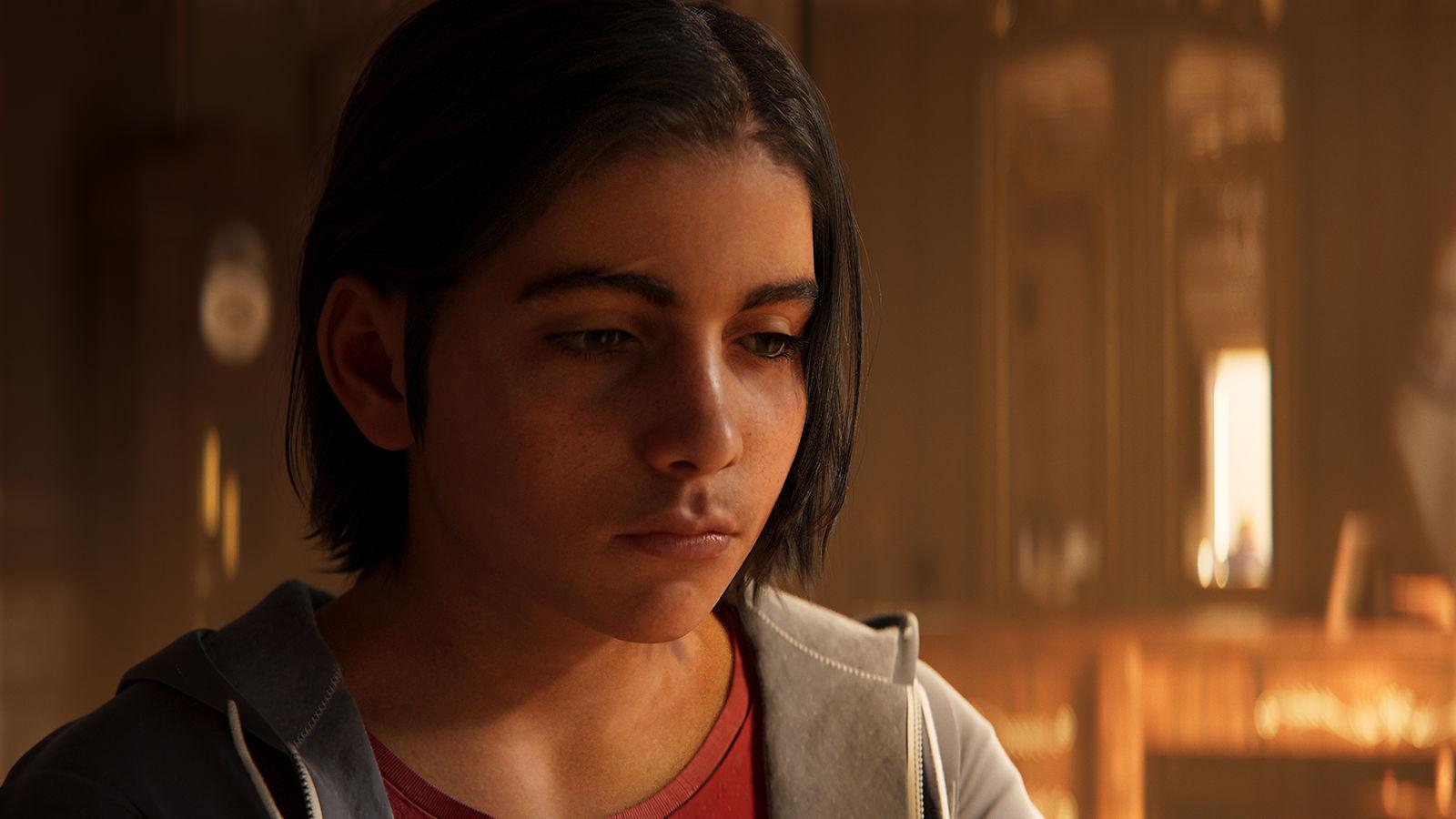 For now chalk this up as a ‘maybe’ – there could be something here, but it could also simply be a happy accident that Ubisoft is using to stoke interest in the new Far Cry.