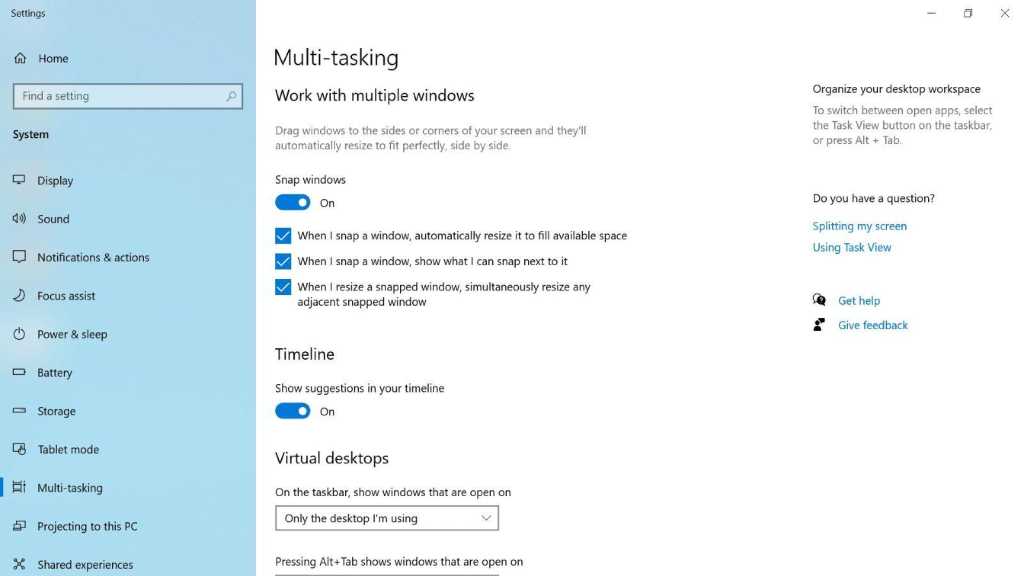 One of the main attractions of working on desktop is the large screens on offer, with most laptops coming in 13in, 15in or even 17in variants.

In the case of desktop PCs that can stretch to more than 30in, and that’s before you factor in connecting to an external monitor.

All that screen real estate means there’s ample opportunity for multitasking. Windows 10 offers plenty of excellent tools for this, many of which can be accessed via Task View.

However, sometimes nothing quite compares to using multiple windows on the screen at the same time, and that’s where Snap Assist comes in.

What is Snap Assist?

Put simply, Snap Assist is a way to efficiently manage the windows open on your screen at any one time.

Using the mouse, touchpad or even touchscreen, it allows you to quickly move a window into one section of the screen and have it automatically adjust to to the constraints of the area.

This takes much of the hassle out of resizing various windows to fit on the screen, making it easier to interact with multiple programs simultaneously.

How to use Snap Assist on Windows 10

Snap Assist allows for up to four different windows to be on the screen at any one time, so the process differs slightly depending on how many you want to have visible. Before you start, you’ll want to have everything you want to use in split screen already open.

For two, the process is as simple as dragging one window into one side of the display. Look out for a white outline, indicating where it will be dropped into.

If you’re happy just let go, and you’ll be prompted to select another of apps to fill the other half of the screen. You can then adjust how much of the screen each window takes up by using the divider between the two, although it does stop you from making on app so small it’s unusable.

A process known as corner snap applies if you want to split the screen between three or four apps, although it’s relatively similar:

It’s worth noting that this split-screen arrangement will now act as one window, meaning you can easily open something else without disrupting the current layout.

Multitasking has remained relatively consistent in Windows 10, although that’s set to change with the release of Windows 10X.

Specifically designed for dual-screen devices, it could revolutionise multitasking when it arrives on the upcoming Surface Neo.