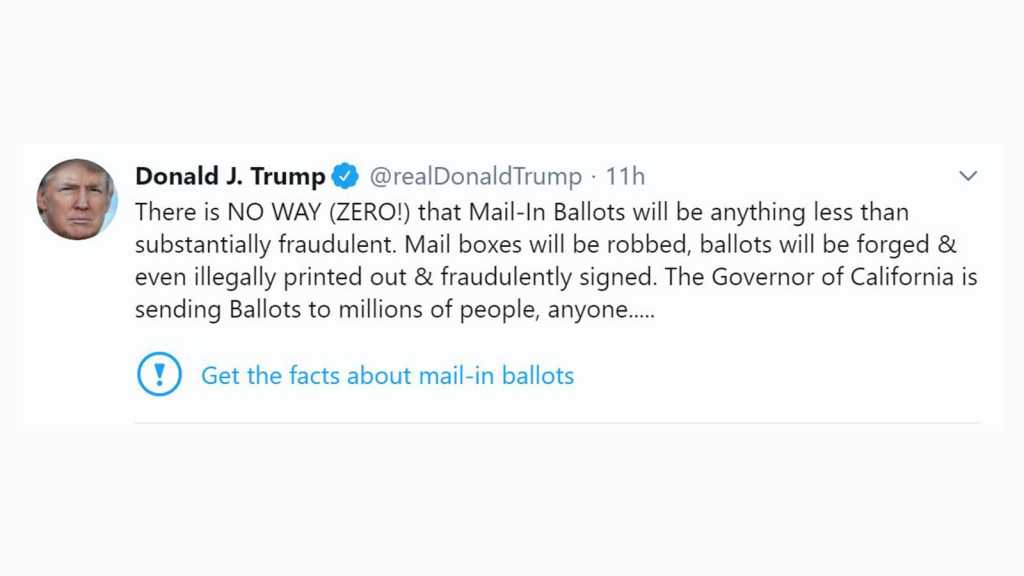 Twitter has marked a tweet from President Donald Trump with a cautionary tag that users can click on to ‘Get the fact’, in this case, “about mail-in ballots” after Trump tweeted that mail-in ballots would be abused fraudulently.

The platform added its fact-checking tag to two tweets from the President:

Clicking on the warning takes you to a page that explains in clear language what he claimed, and offsets it with the below fact-check that says “Trump falsely claimed that mail-in ballots would lead to “a Rigged Election.””

It’s the first time Twitter has moved to fact-check Trump, who has famously used and abused the social media platform to spread alleged disinformation in a way that is unpresidential to say the least. Sources that go against the President’s claims are CNN and the Washington Post, two establishments the right-leaning Commander in Chief frequently turns his ire towards.

The labelled warning shows up whether you view the tweet in your feed, on Trump’s feed or if you tap into the tweet to view its replies on mobile. On desktop the warning seems to disappear when you click through to view the tweet.

Trump has since tweeted (where else?) his objection, wrongly suggesting that journalistic fact-checking is against the American right to free speech. Hopefully, Twitter fact-check labels that.

….Twitter is completely stifling FREE SPEECH, and I, as President, will not allow it to happen!

As Trump ramps up his 2020 election campaign against Joe Biden it’s good to see a public platform like Twitter have the confidence to move to fact-check the President given the proven abuse of Facebook’s platform to influence voters in 2016.