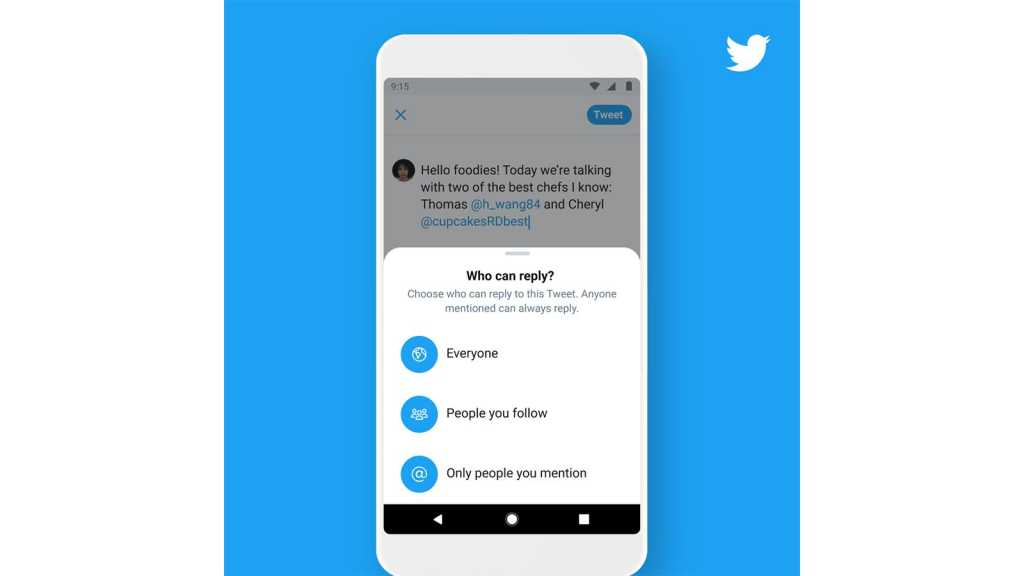 Twitter is testing a new feature that lets you limit who can reply to their individual tweets. Some users have received the update that lets you choose whether anyone, people you follow, people you mention in the tweet, or no one can reply. You choose the option when composing the tweet, and can’t change the setting after it’s sent.

By default the tweet will be normal so anyone can respond, but it’s hoped that the feature will help benefit people who might be hounded on the platform by unwanted followers, or as a way to keep a conversation on Twitter between a select number of people.

Testing, testing… A new way to have a convo with exactly who you want. We’re starting with a small % globally, so keep your 👀 out to see it in action. pic.twitter.com/pV53mvjAVT

It won’t hide the tweet however, so anyone who follows you or visits your unblocked feed will be able to read, retweet or like, but can’t reply.

In a blog post Director of project management Suzanne Xie said, “[S]ometimes, unwanted replies make it hard to have meaningful conversations. (Ahem,  reply guys.)” ‘Reply guys’ is the term used for men on social media who respond frequently and over-familiarly to women’s posts.

“Before you Tweet, you’ll be able to choose who can reply with three options: everyone (standard Twitter, and the default setting), only people you follow, or only people you mention. Tweets with the latter two settings will be labeled and the reply icon will be grayed out so that it’s clear for people if they can’t reply,” Xie added.

Public reaction has been mixed – on the one hand it stops unwanted abuse from trolls for some users, but others argue it makes the platform less open and even more of an echo chamber.

To be honest, we should all just go on Twitter less.