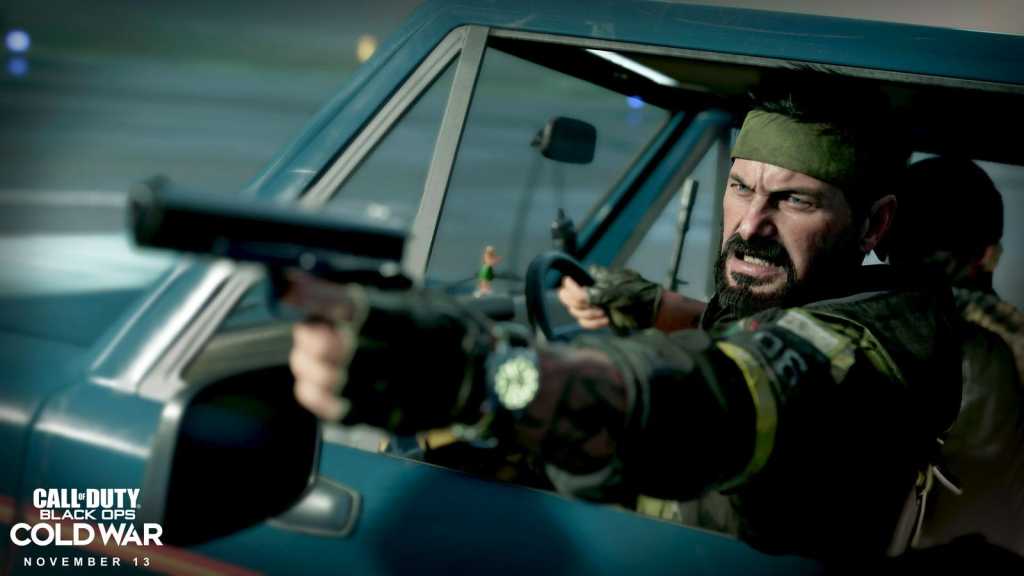 The new Call of Duty is here, with the fifth Black Ops game finally out now on current- and next-gen consoles, along with PC.

Black Ops Cold War is a direct sequel to the original Black Ops, with an espionage story set in the early ’80s. That means a slick single-player campaign, along with the usual multiplayer modes – including Zombies and integration with the free-to-play battle royale game Warzone.

What platforms is Black Ops Cold War on?

The new Call of Duty is available on PC, PS4, Xbox One, and the next-generation PS5 and Xbox Series X.

Since the PS5 release date for the UK and Europe is 19 November, that version of the game comes out a little later in those markets – but was available from the 13th in the US, where the PS5 went on sale earlier. 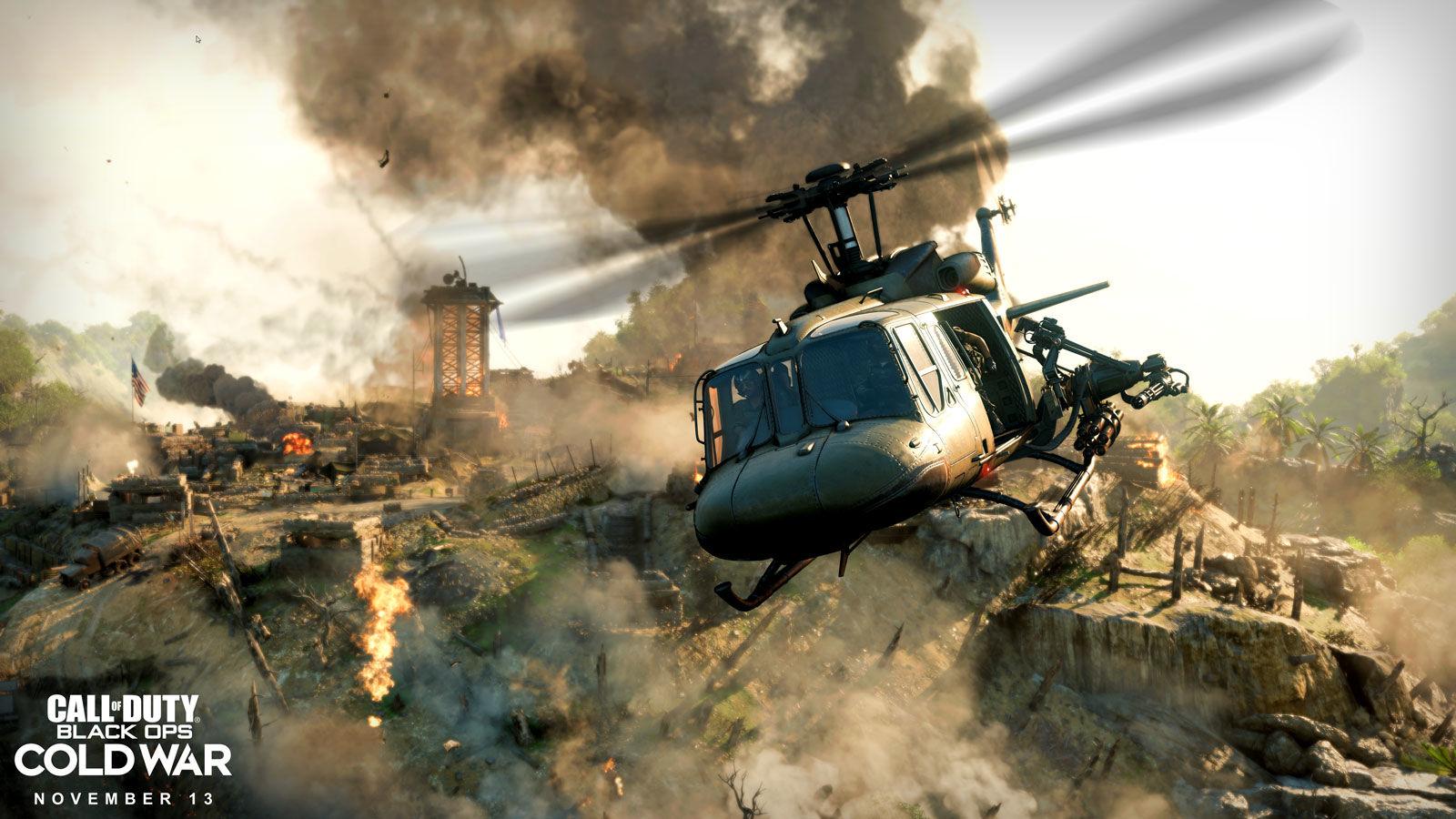 Which version of Cold War should I buy?

Inevitably there are multiple versions of Black Ops Cold War to decide between:

The standard edition is the only option if you want a physical disc version of the game, with disc options for both current-gen consoles and next-gen. You will be able to upgrade to next-gen versions, but it looks like you’ll have to pay for the privilege. 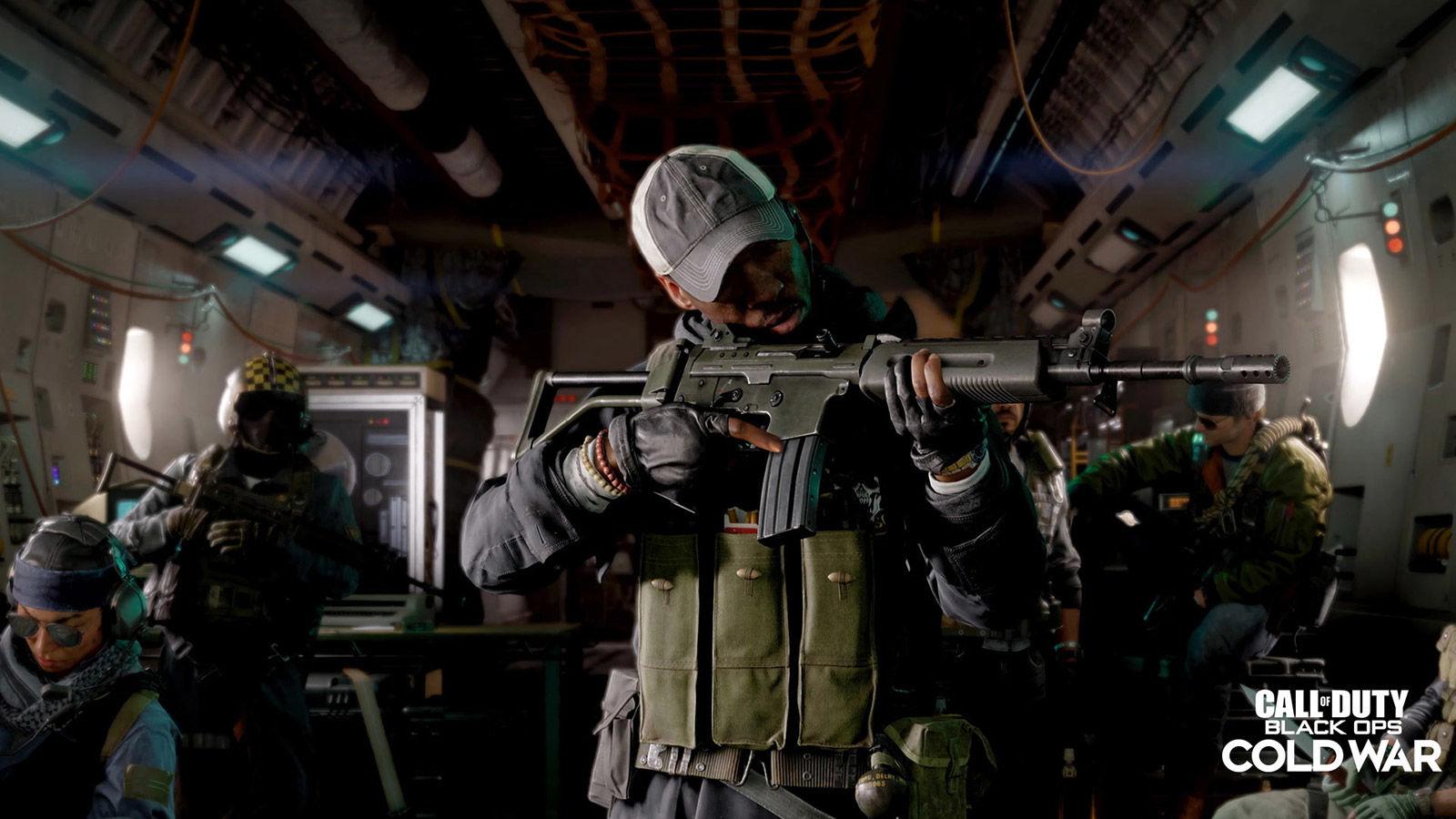 For many the cross-gen bundle will appeal most. For £10/$10 more you get copies of the game for both PS4 and PS5, or Xbox One and Xbox Series X. That means you can play Black Ops Cold War as soon as it comes out, while being ready to upgrade to the next-gen version whenever you manage to get one of the new consoles. And yes, all of your progression and saves will carry over. You’ll also get the Confrontation Weapons Pack with two weapon blueprints.

Then the devoted fans can consider the Ultimate edition. Again, this is digital only, but it includes the cross-gen bundle plus the Season One battle pass, and the Land, Sea & Air pack with three operator skins, three weapons, and three vehicle skins.

What are the PC system requirements?

Activision has revealed the PC spec requirements for Cold War, with five different tiers running from minimum to Ultra RTX. The biggest attention grabber is that it will take up 175GB of space – or a whopping 250GB for the Ultra RTX settings in 4K. And that’s before you even get to any DLC or patches. 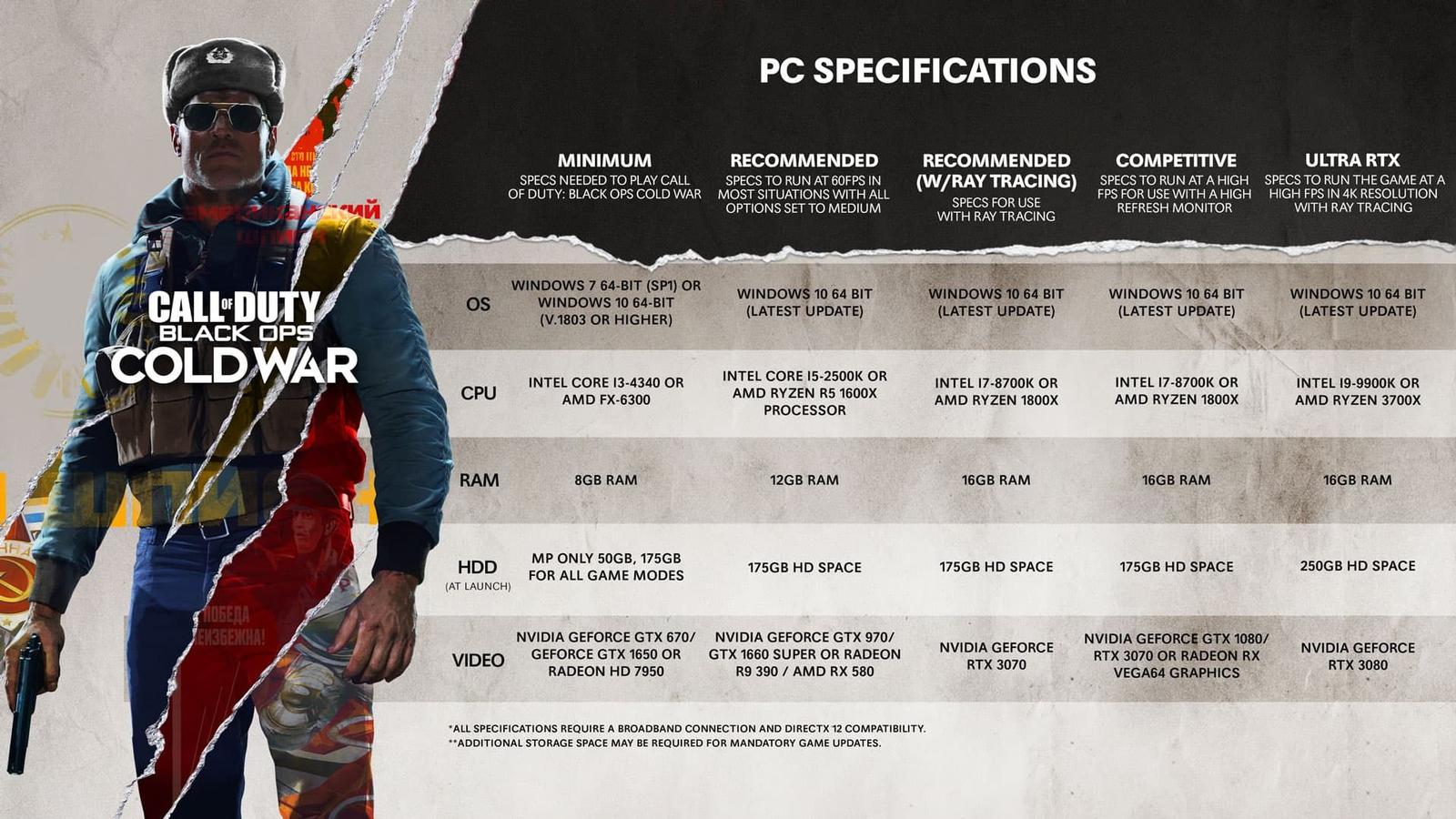 The best place to start is the game’s full reveal trailer, which shows off a mix of cut-scenes and gameplay footage capture on PS5:

If you want to watch the full version of the briefing with CGI Reagan, the Perseus Briefing trailer is basically an uncut version of that scene, and sets the story well:

If it’s campaign gameplay you’re after, the 4-minute clip shared at the PS5 Reveal event should interest you:

And then there’s this first cryptic teaser, which hints at the story and offered the official reveal of the title:

It’s also worth watching Nvidia’s RTX trailer, which shows off just how Black Ops Cold War will take advantage of the updated ray-tracing tech powered by the new RTX 3070, 3080, and 3090 graphics cards. This is pretty much the best this game will ever look:

Then there’s the Zombies trailer, which focuses on…well, you can probably guess:

And, finally, the launch trailer. It’s another quick jaunt through the story and a few big set pieces from the campaign:

What to expect from Black Ops Cold War

First up, the game was developed by Raven Software and Treyarch, the developer that worked on the previous four Black Ops titles, including the fan-favourite original – to which this is a direct sequel.

Based on the title it’s clear it’s set during the Cold War. More specifically, it takes place in the early ’80s, as a long-inactive Soviet agent named Perseus moves back into action, prompting an inevitably aggressive American response.

Perseus is actually a real spy, who was believed to have infiltrated the Manhattan Project and other significant American military weapons programs. Perseus – who was never found – was supposedly mostly active in the ’40s and ’50s, so the game is imagining what his later activities could have been. 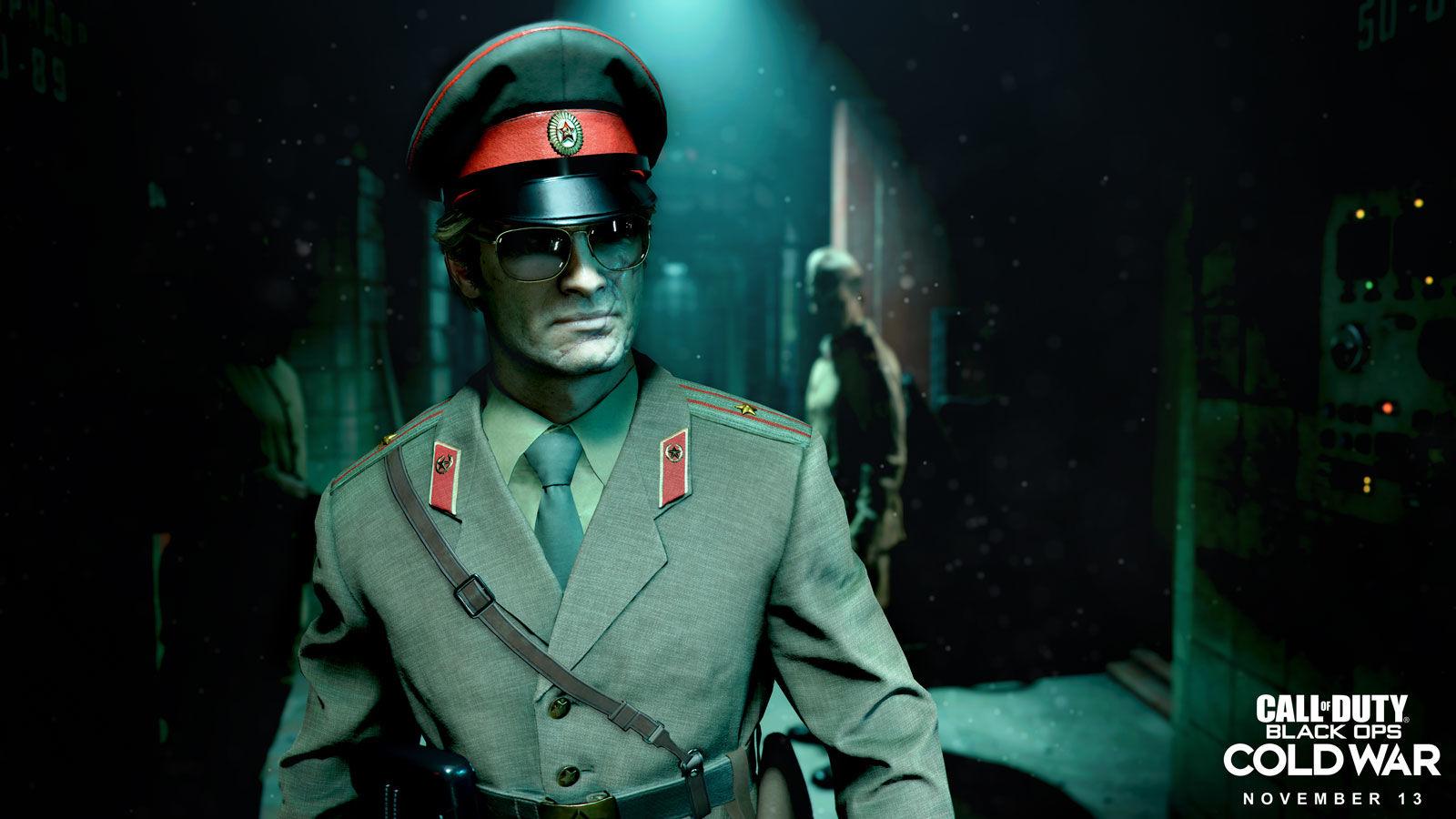 “Call of Duty: Black Ops Cold War fuses elements of 1980s pop culture through a mind-bending conspiracy story, where deception and subterfuge are the norm in the gripping single-player Campaign,” the official description reads. “In this sequel to the original Call of Duty: Black Ops, players encounter historic figures and learn hard truths as they battle around the globe through iconic locales like East Berlin, Turkey, Vietnam, Soviet-era Moscow, and more.”

“As elite operatives, players attempt to stop a plot decades in the making as they follow the trail of a shadowy figure named Perseus, who is on a mission to destabilise the global balance of power and change the course of history.”

Gameplay-wise that doesn’t give a whole lot away, but it goes on to promise “a wide selection of Cold War weapons and equipment,” so expect equipment to be dated appropriately.

First up, the game will support cross-platform and cross-generation play. That means you can play with other people across any combination of platforms, and all of your progress will also be saved to your Activision account, meaning you can jump from Xbox One to PS5 to PC without losing any gear or progression. 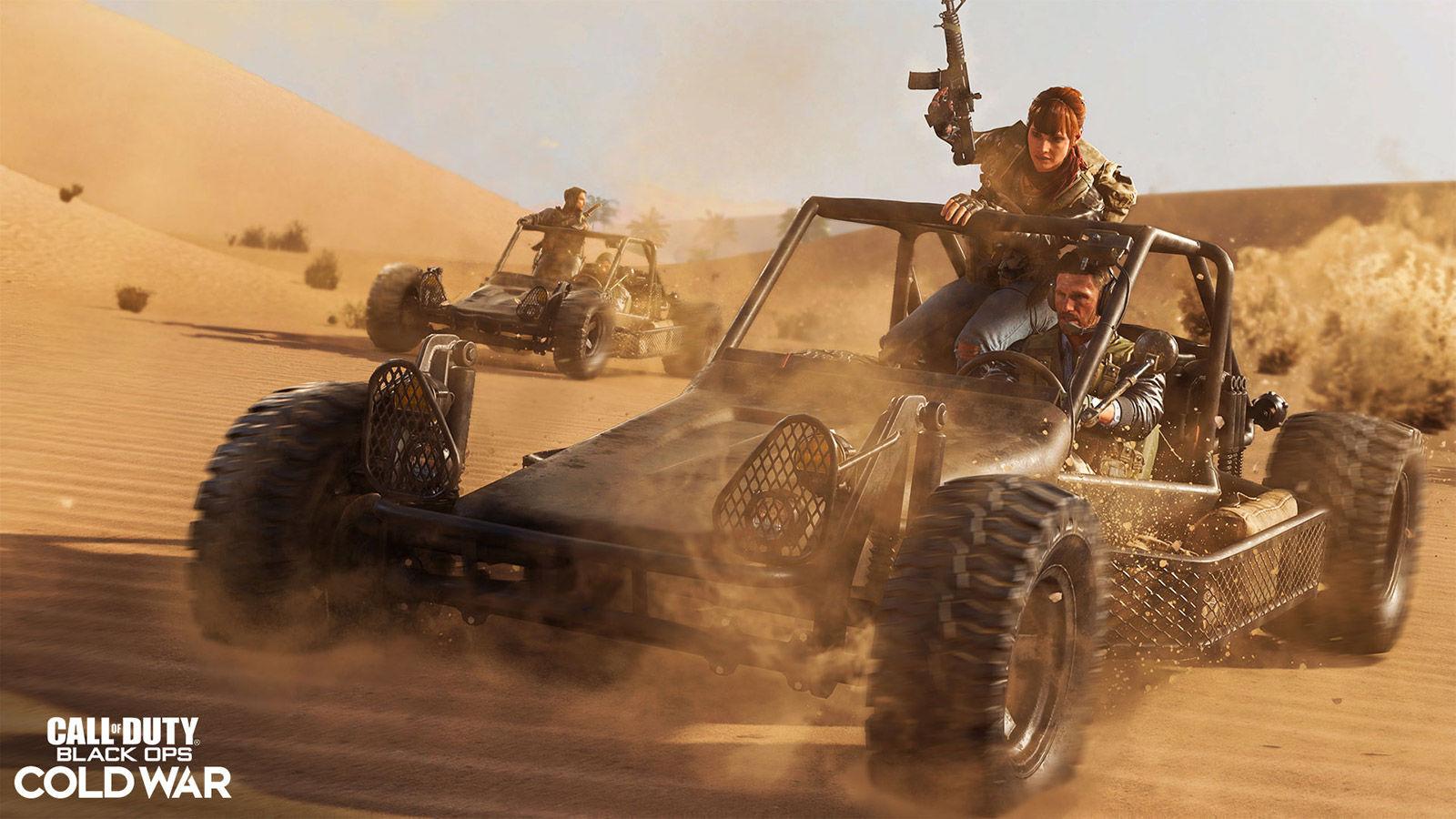 Much like last year’s Modern Warfare, the game will also connect to Warzone, the free-to-play Call of Duty battle royale game, with future Battle Passes and other post-launch content to be shared between the two games, along with a shared progression system too – which also works across the whole experience, including Zombies.

As for Black Ops Cold War’s own multiplayer, you can expect the standard array of multiplayer modes including Team Deathmatch, Search & Destroy, Domination, Control, Kill Confirmed, and Zombies, plus three new ones:

Inevitably we’ll see new maps too, with confirmed ones so far including:

One big addition is Wildcards, which can be slotted to your Operator to give one of four benefits:

Guns will be more customisable than before, with up to 54 attachments across eight nodes available through the Gunsmith for all primary and some secondary weapons. 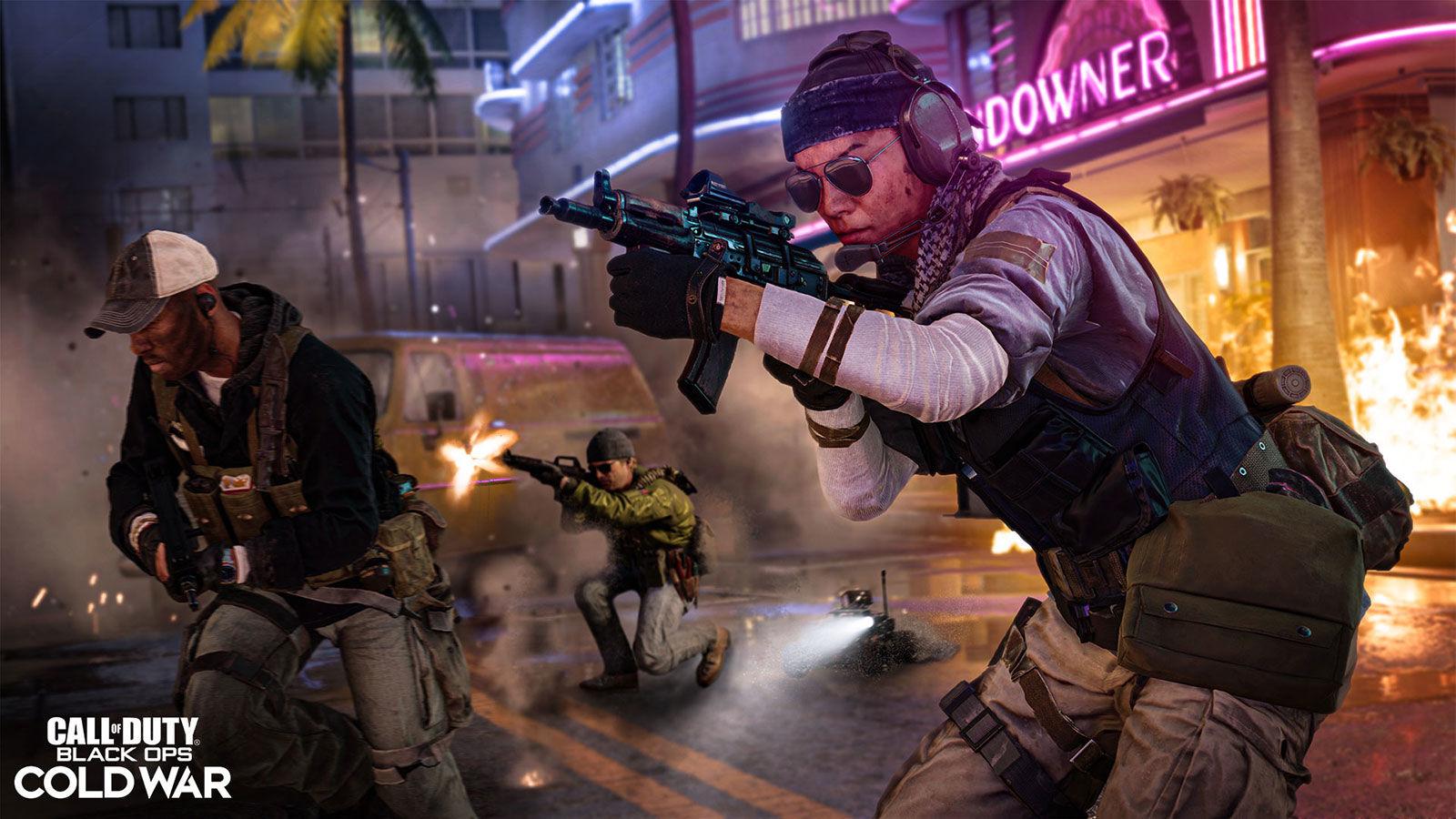 Scorestreaks also return, but have been tweaked: most notably your score now continues to build after you die, giving more players the chance to earn rewards. Cooldowns and special Scorestreak counters will help balance out the special abilities, while players who can string multiple kills together will earn points faster.

Movement should feel better too, with sprinting, sliding, and jumping all tweaked to feel more natural, with speed varying across the movement rather than being uniform.

And of course, Zombies is making a return, with a four-player co-op campaign mode that tells a new story, dubbed Die Maschine, within the CoD: Zombies mini-universe, with new characters at the heart of it.

You’ll be controlling a team of CIA-backed operatives exploring a facility that nods to the original ‘Nacht der Untoten’ map, but you’ll be up against both the titular zombies and a squad of Soviet operatives too. Expect new enemies, new weapons, and more.