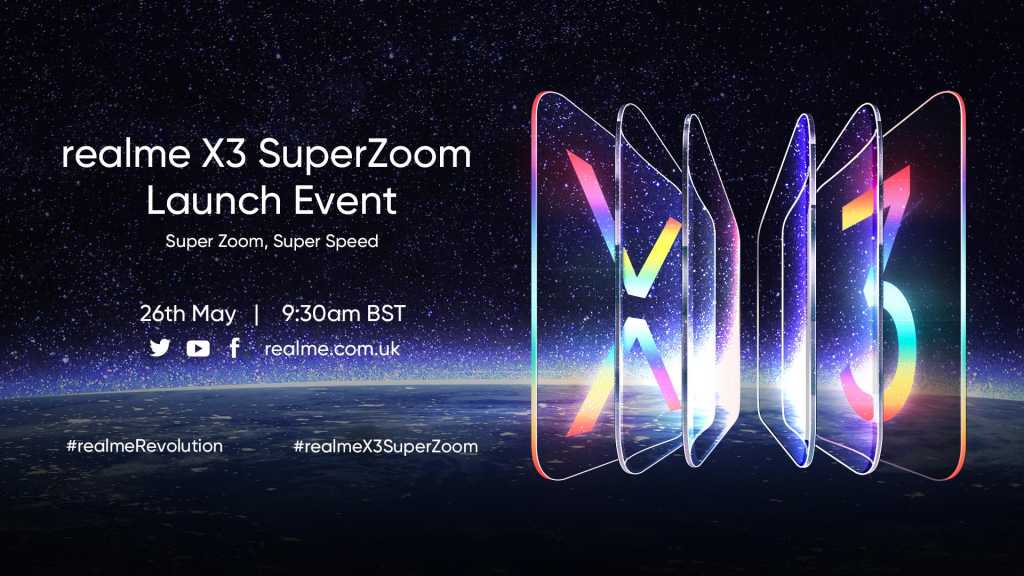 We’re still reeling from the launch of the Realme X50 Pro – India’s first 5G phone and the most affordable 5G flagship in markets including the UK – but the fledgeling Chinese phone maker isn’t resting on its laurels, with the Realme X3 and X3 SuperZoom slated to launch in less than a week.

Realme is developing and releasing phones at a breakneck pace, with over 30 handsets now available across the globe since the company’s first device – the Realme 1 – arrived on the scene back in early 2018 and it’s showing no signs of slowing down, expanding the launch both a smartwatch and a smart TV in the coming weeks.

What is the Realme X3 SuperZoom?

Affordability has always been an underlying proponent of Realme’s releases and that’s not expected to change with the freshly-announced X3 SuperZoom.

Based on the company’s initial teases across its social media channels, we’re expecting an X3 and an X3 SuperZoom. Unlike the previous generation, there doesn’t appear to be an X3 ‘Pro’ this year, so the SuperZoom is essentially that device by another name, as far as we can tell.

Speaking of names, it doesn’t take a genius to assume that the phone’s main intent is to offer impressive zoom capabilities, not to mention a menagerie of sensors to jump between.

When does the Realme X3 SuperZoom launch?

As per Realme’s own social posts, the X3 and X3 SuperZoom are set to be unveiled as part of a global launch on Tuesday, 23 May. The company is streaming the launch on its YouTube channel at 9:30am BST.

The fact that the company has chosen to cite the event in British Summer Time also suggests the phone (or phones) will be launching in the UK first and foremost, perhaps even ahead of a Chinese or Indian release.

How much does the Realme X3 SuperZoom cost?

While it’s unclear what the exact price point for the X3 SuperZoom will be, we’re expecting it to be characteristically competitive considering the supposed specs onboard.

Its predecessor, the Realme X2 Pro costs £419/€399 and will likely enjoy a notable price-cut once the SuperZoom goes on sale.

What features does the Realme X3 SuperZoom have?

Interestingly, known tech leaker, Ishan Agarwal has already managed to get his hands on a near-retail-ready boxed version of the SuperZoom, granting us plenty of insight into what the final product will bring to the table.

Here are the specs, based on initial findings and leaks:

Considering the expected price point of this phone, these are some seriously promising specs, with Realme keeping costs down without compromising on performance by giving the X3 SuperZoom the same chip as its predecessor, not to mention the excellent OnePlus 7T and 7T Pro.

The quad-camera setup likely also relies on the same 64Mp main sensor as (among others) the company’s flagship X50 Pro, while its periscopic zoom abilities have the potential to rival that of the Huawei P30 Pro (or more recently, the Oppo Find X2 Pro).

Announcing realme’s next leap in camera technology with 60x Zoom & Starry Mode on #realmeX3. I urge you to take the #realmeSuperZoom challenge and try clicking a better pic than this with your smartphone. RT and reply using #realmeX3. pic.twitter.com/9SidiG6QKg

The SuperZoom also isn’t shying away from tackling the Pixel 4 Series’ astrophotography mode, if the above tweet by Realme India’s CEO, Madhav Sheth is anything to go by.

While test shots from the CEO of the test device in question should be taken with a generous pinch of salt, it looks as though the X3 SuperZoom will boast an enhanced night mode of its own, called Starry Mode, that might be able to muster some superb low-light images.