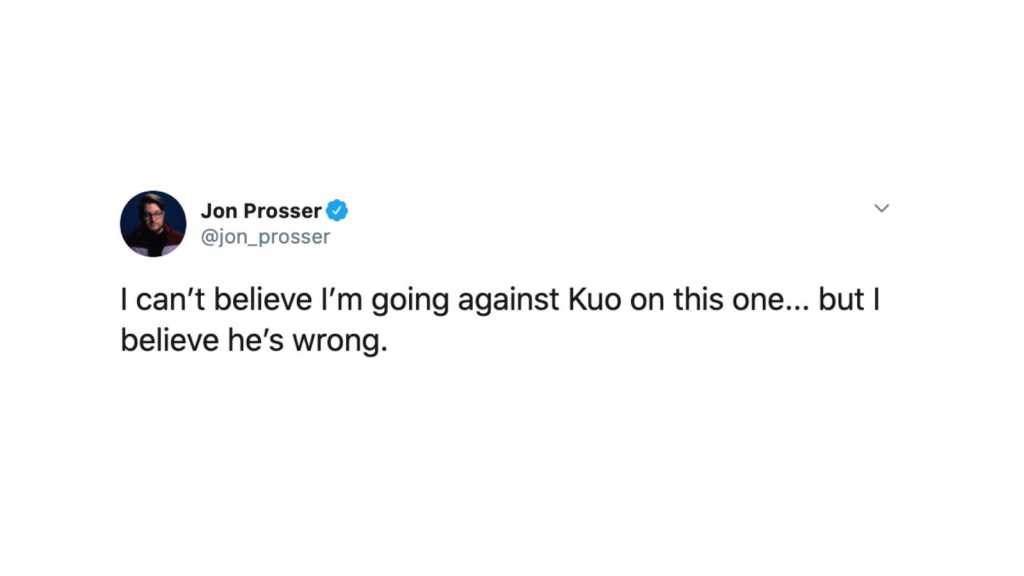 Apple has suffered at the hand of Jon Prosser who, until recently, was relatively unknown on the Apple leak scene. Since bursting onto the scene earlier this year, Prosser has correctly predicted the release of the iPhone SE – complete with pricing and key specs – alongside the updated MacBook Pro, and he has even provided key details around the upcoming iPhone 12 range. Of course, the latter can’t be proved just yet, but it’s in-line with what other sources seem to be reporting and given Prosser’s track record, there’s a tendency to trust what he says.

Up until now, our main source of information about Apple’s supply line was Ming-Chi Kuo. The mysterious analyst has a great track record when it comes to predicting the release of upcoming – and often unannounced – Apple products, and has been doing so for quite some time now. Kuo’s predictions aren’t always accurate, but products he discusses are usually quite far from release and thus susceptible to change.

With both leakers having a great track record when it comes to Apple releases, you’d expect the two to align when discussing upcoming products like the heavily-rumoured Apple Glasses, but this doesn’t seem to be the case.

In a recent note to investors, Ming-Chi Kuo claimed that Apple isn’t planning on releasing its AR glasses until 2022 at the latest, aligning with reports from DigiTimes and The Information that suggest a similar release window. Then, a day later, Jon Prosser went against Kuo’s claim, suggesting on Twitter that the Apple Glasses are currently on-track for a March-June 2021 release.

I can’t believe I’m going against Kuo on this one… but I believe he’s wrong. Apple Glasses are aimed for March-June 2021. Also. I’ve seen them. They’re sleek as hell. 👀 Will be showing you soon 🤫 https://t.co/0GaOYDA5N8

Prosser goes further than simply sharing the release date – he also claims to have seen the Apple Glasses himself, and that he’ll be sharing more information very soon. In follow-up tweets and replies to excited Apple fans, Prosser also claims that he’s planning to share a video showcasing the AR glasses soon, and that he’ll have more details about Starboard, the in-development Apple Glasses UI, to share soon too.

Prosser has certainly seen something that he believes are Apple’s AR glasses, and if legitimate, it could be a devastating blow to the usually-secretive company.

It seems as if Prosser’s source has knowledge and access to products that are yet to make it past Apple’s rigorous R&D phase, while Kuo’s predictions are more focused on supply chain plans. However, the fact that Kuo’s supply chain prediction doesn’t line up broadly with Prosser’s March-June 2021 release does suggest that one, if not both, have got it wrong.

Some suggest that it could be a AirPower-like announcement in 2021 with an eventual release in 2022, but we doubt Apple would want to take that risk again – after all, the AirPower was eventually canned due to manufacturing problems and was a big embarrassment for the company.

So, who should you believe? As with any pre-release rumour, it has to be taken with a pinch of salt, but Prosser has proven his sources are on-the-money with a flood of accurate product leaks in recent months. And, if Prosser really does have a video of the alleged Apple Glasses to share with excited fans, it’ll further back up his claim.

We’ll have to wait and see for now, but regardless of when they arrive, the Apple AR glasses are set to be an absolute game-changer.