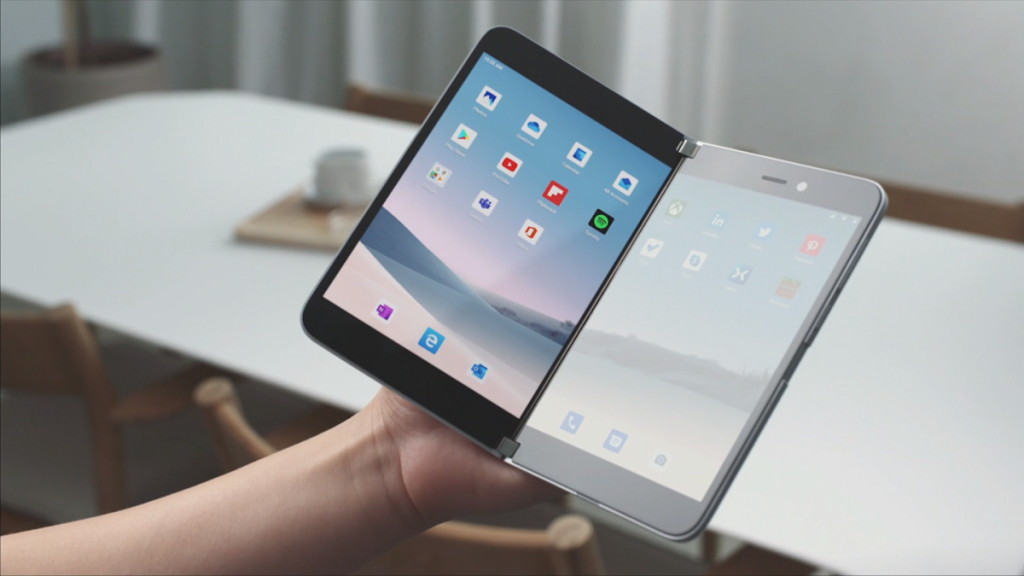 More leaks have hinted at what specific specs the upcoming Microsoft Surface Duo will have, adding to the dual 5.6in 1800 x 1350 AMOLED displays that the company has confirmed. Aside from this, Microsoft has kept most of the other specs and components quiet.

According to Windows Central, the Duo’s specs have been finalised for some time and it’ll boast a Snapdragon 855 chipset, 6GB RAM and 64GB or 256GB storage. It also claims, sadly, that the phone doesn’t have wireless charging or even NFC – meaning mobile payments would be out.

It is also said to sport just one 11Mp camera sensor that will sit above the right hand screen, and will serve as the front and rear facing camera depending on how the device is folded. The report goes on to say the device will be powered by a 3,460mAh battery “which contacts have said is able to get Surface Duo through the day, but don’t expect an endurance champ.”

The Duo has been expected for ‘holidays 2020’ along with the, confusingly, Windows-based dual screen Neo device. Microsoft is still to confirm an actual date, which means the leaked Duo specs become less appealing by the day to those who live at the cutting edge of tech. Not only that, but if it is an expensive flagship device, it might be seen as doing a disservice to less tech-savvy buyers.

The device will have a Snapdragon 855 around Q4 2020 at the earliest, a chipset first seen on the Samsung Galaxy S10 series in Q1 2019. It doesn’t sound like too much time, but in mobile tech that is nearly two years. Windows Central added that “Surface Duo’s internal design was finalized way before that requirement was known about, and therefore doesn’t have room for the additional 5G chip that’s required when using the Snapdragon 865.”

The Duo, if released in Q1 2021, might be sold alongside competing phones that have the Snapdragon 875, a processor a full two generations ahead of Microsoft. Then again, perhaps Microsoft will prove its software is where the Duo can win if it can eke a lot of battery life out of the slightly dated internals.

It’ll be interesting to see the price point of the Duo, as this could make or break its success.