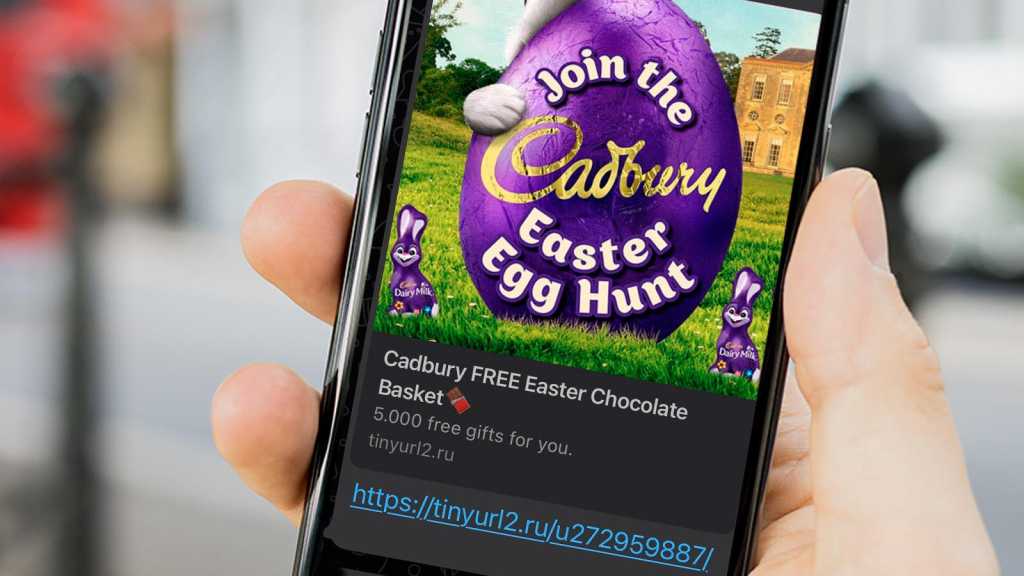 Outside London’s Victoria station in 2006, a group of researchers offered people the chance to win a basket of Easter chocolate. All they had to do was fill out a form with a few personal details. Surprisingly (or maybe not so surprisingly) over 80 percent of people handed over enough data to steal their identity.

It seems that not a lot has changed over the years: we’re still lured in by the promise of free chocolate. Currently, messages are being forwarded on WhatsApp claiming to offer a free Easter chocolate basket from Cadbury.

It’s barely different from a similar scam in May 2020 which promised a Cadbury hamper if you forwarded the WhatsApp message to 10 friends and completed a “few steps” afterwards.

The signs this latest message is a scam should be fairly obvious, but just to state it clearly: there is no free Easter chocolate basket. It is a scam.

People have quickly taken to social media to point this out, and complain about the sheer number of these messages they’re receiving from friends, but claims that there “is no Cadbury Easter egg hunt” aren’t entirely true.

In fact, Cadbury is running a Worldwide Hide event on its website (below). However, it’s a not a competition and no free chocolate is being offered. 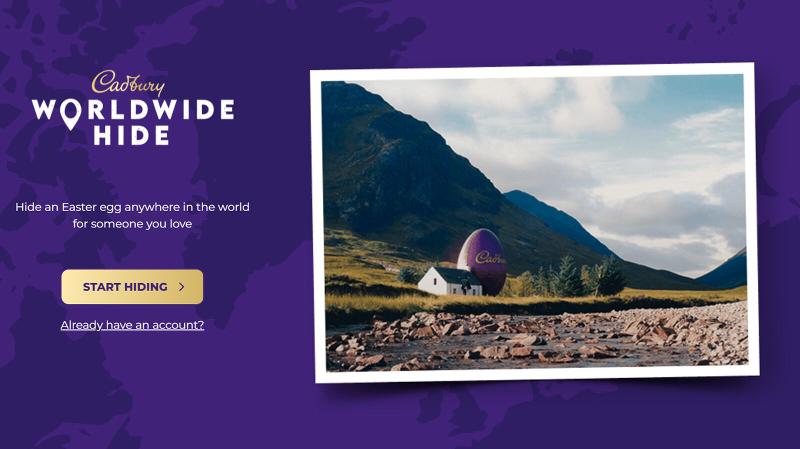 A spokesperson for Mondelez (which owns Cadbury) told Tech Advisor, “We’ve been made aware of circulating posts on social media, claiming to offer consumers a free Easter Chocolate basket. We can confirm that this has not been generated by us and would urge consumers not to interact or share personal information through the post. Customer security is our priority and we’re working with the relevant organisations to ensure this is resolved.”

The message circulating on WhatsApp at the end of March 2022 is pretty crude: a simple image of a purple Cadbury egg with the wording Join the Cadbury Easter Egg Hunt. Beneath the image is a message that suggests free baskets of chocolate are on offer and “5.000 free gifts for you”.

There’s a link to tap on, and it appears the scammers have a variety of these: some have already been taken down but some are still live. If you click through, you’ll see something that looks fairly official, with some questions to answer before getting the chance to win the basket. 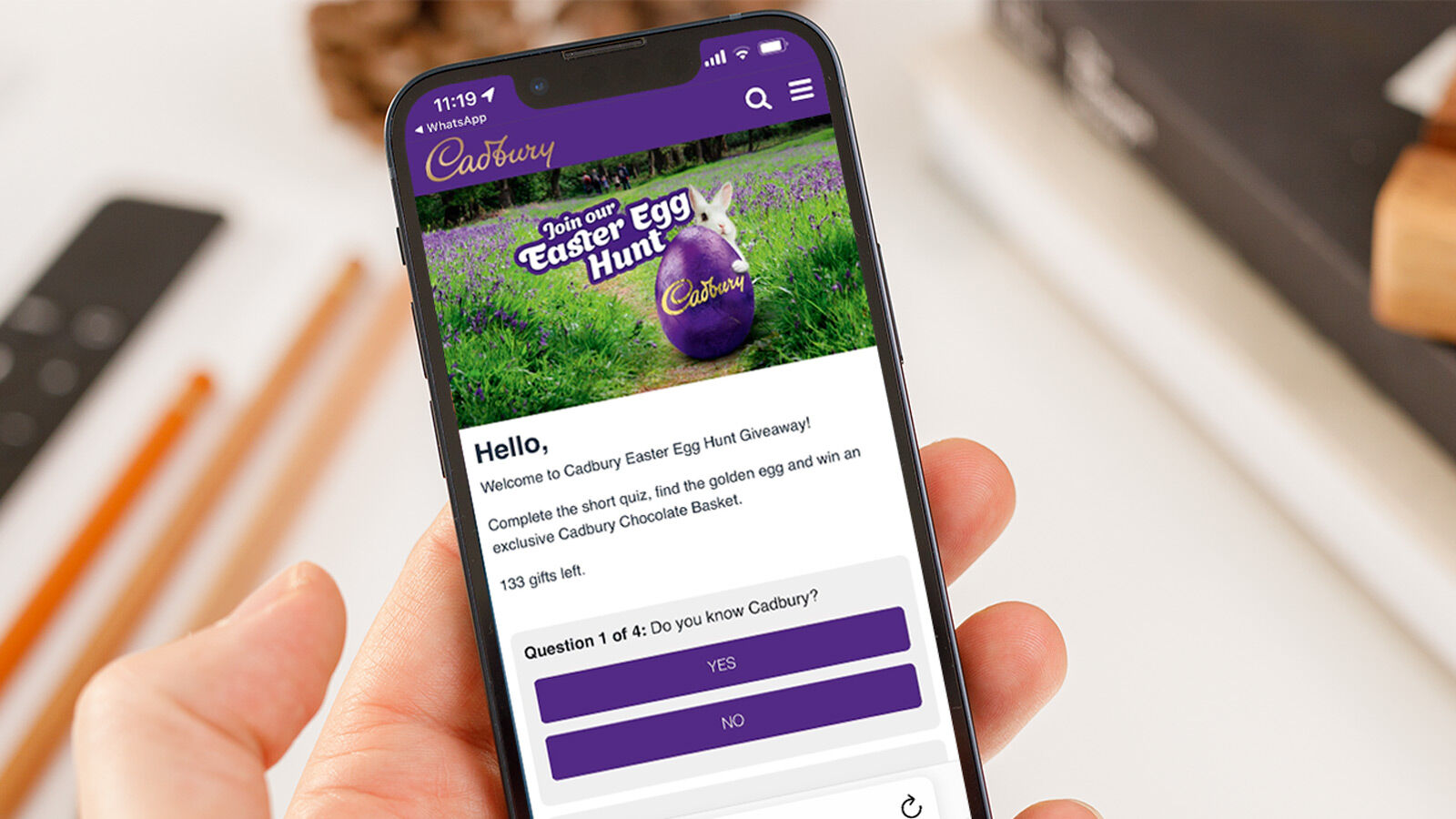 Scams like this play on your fear of missing out by displaying how many of the free items are left in order to make you jump through those hoops more quickly and – hopefully – not read too carefully what you might be signing up for.

The scammers want your name, address and potentially other personal details – information you would assume is required to send you the chocolate – but then use those details to try and steal your identity and your money.

Red flags are everywhere, from the suspicious text to the link itself, which looks like one from the well-known tinyurl service, but adds a 2, and uses a .ru domain, which means it’s a Russian website.

Previous scams have used a variation on a theme that has been around for years across all social media, including WhatsApp and Facebook. The usual ruse is that Cadbury is celebrating its anniversary by giving away free chocolate. You have to forwarding the message, which is the mechanism for spreading the scam, and are then asked to do various things before you can claim your ‘free’ hamper.

Again, this should set alarm bells ringing because no legitimate offer from Cadbury – or any other reputable company – would ask you to answer strange survey questions, complete unrelated ‘offers’ with ‘partners’ and even download apps.

In one particular case reported by The Sun, if you’re not careful about what you click on, you can end up agreeing to send premium text messages which could have cost you £200 per year. And as this is added to your phone bill, you might not notice a few £1.50 messages each month.

Answering survey questions is also a bad idea if you don’t know who is running it. Just as with that in-person survey outside Victoria station, handing over personal information when entering competitions is always a risk. It used to result in huge amounts of junk mail arriving through your letterbox, but these days cybercriminals use it to steal your identity and your money.

In most cases, all you need to do to check if an offer is genuine is to head to the company’s website or official social media accounts and see if the promotion exists there or not. Failing that, and if something is being offered by a company you don’t know, either do your research to try and ascertain whether it is legitimate or not, or simply don’t engage with it at all.

Cadbury has always been clear about such scams. “Promotions of this kind will always be announced on Cadbury’s official channels. We do not advise fans to take part… share personal data or share the message within their networks.”

Whether it’s free chocolate or the all-time favourite lure, a free iPhone, you should think twice before forwarding messages to your friends on WhatsApp, Facebook and any other social media, as you could cost them big time too.