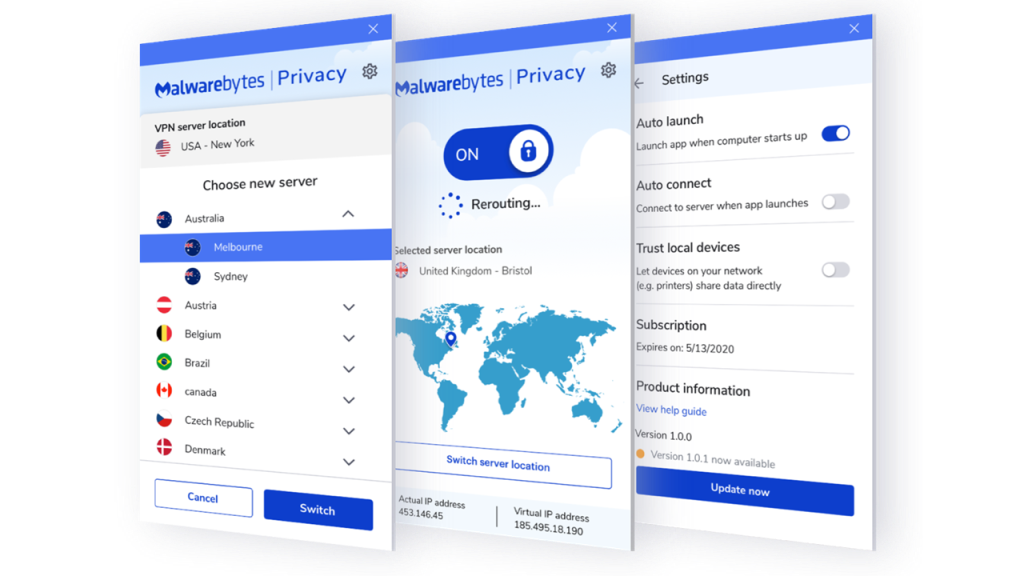 A little over a year ago, Malwarebytes announced it was to launch its own VPN service. We’d already seen McAfee and Bullguard do it, so Malwarebytes wasn’t the only antivirus provider to expand into VPNs.

The snag was that it was only for Windows, which meant it wasn’t all that useful unless you only wanted a VPN for your laptop or PC.

Now, though, it has launched Android and iOS apps to bring its service more in line with rivals, having released an app for macOS in the meantime. There’s a Chrome extension in the works, too.

The VPN service is called Malwarebytes Privacy and is designed primarily to give users privacy and security when connected to public Wi-Fi, which is usually open, meaning it doesn’t require a password to join.

Using a VPN gives you back the encryption that you ordinarily get from password-protected Wi-Fi, and it’s why everyone should use a VPN if you’re going to use the free Wi-Fi in a cafe, airport, hotel or any other public place.

Setting up a VPN service isn’t trivial and looking at the server numbers, Malwarebytes Privacy doesn’t offer nearly as many servers or locations as some of its more well-established rivals.

There were 180 servers in 30 countries at launch, and that’s now up to 400, and uses the latest WireGuard protocol. It doesn’t unblock popular streaming services, though, and this is why many people want a VPN.

A one-year subscription, which covers five devices, costs US$59.99. That’s $4.99 per month, making it more expensive than many rivals including NordVPN which also use a WireGuard-based protocol called NordLynx.

A more expensive bundle also includes the company’s antivirus protection – Malwarebytes Premium – as well, and if you do use it on five devices, it’s only $1.66 per month per device, which is certainly decent value.

But even if you’re tempted, note that there’s no way to pay for the service anonymously (the options are PayPal or credit / debit card) and Malwarebytes is based in the US, one of the so-called ‘five eyes’: countries that share intelligence with each other.

Malwarebytes says that it logs no data, so your online activity should be safe, but given the wealth of choice when it comes to VPN services, it’s hard to think of many reasons to persuade users to sign up to Privacy VPN.