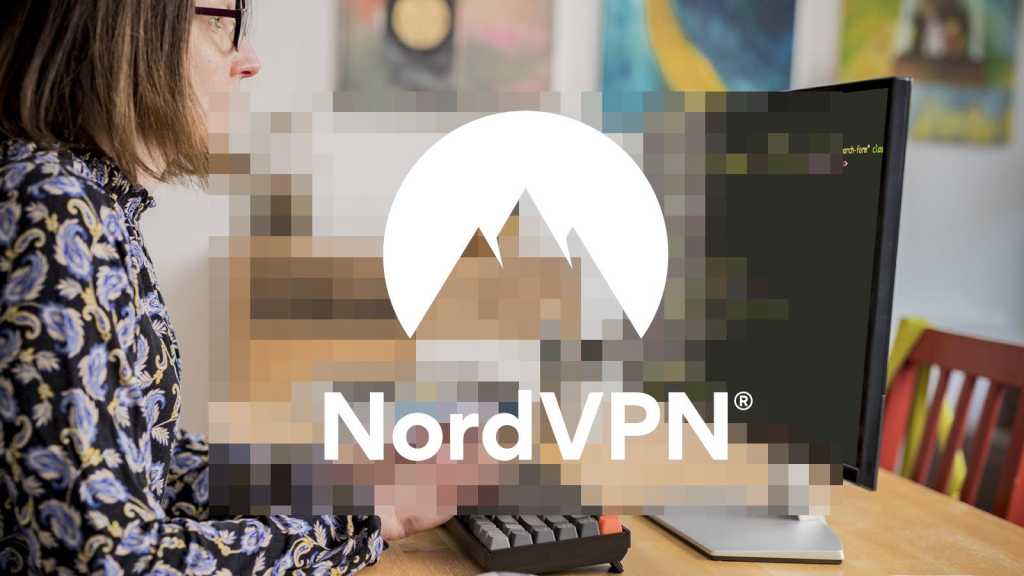 NordVPN is already used by millions of people around the world and it’s now getting even better. The company has been developing its own proprietary protocol which, you’ll be glad to know, will make your connection speeds a lot faster.

One of the downsides of using a VPN service is that it almost always reduces your internet connection speed. There are many factors which determine how much of a hit your connection actually gets, but one is the protocol that’s used to encrypt all the data that’s sent to and from your device.

Obviously, the security you get from encryption is a worthwhile tradeoff, but what if you could have the same security without giving up too much performance? That’s exactly what the new NordLynx protocol offers.

Unless you’re unusually interested in how your VPN service works, you probably don’t check which protocol it’s using. In fact, often there isn’t a choice, so you can’t change it, such as on an iPhone or macOS.

But NordVPN says the new protocol will be available to all its users by 24 April 2020. All you have to do is update to the latest version of the app and switch to NordLynx instead of the default protocol. In future, the company says it might make NordLynx the default.

NordLynx is the name for the new encryption process which uses the WireGuard protocol for better speed than IKEv2 or OpenVPN, the two protocols currently used by most VPN providers.

There’s a technical problem, though, as using WireGuard requires storing some data on the server that personally identifies you, which is very bad for privacy – the second pillar of a VPN. 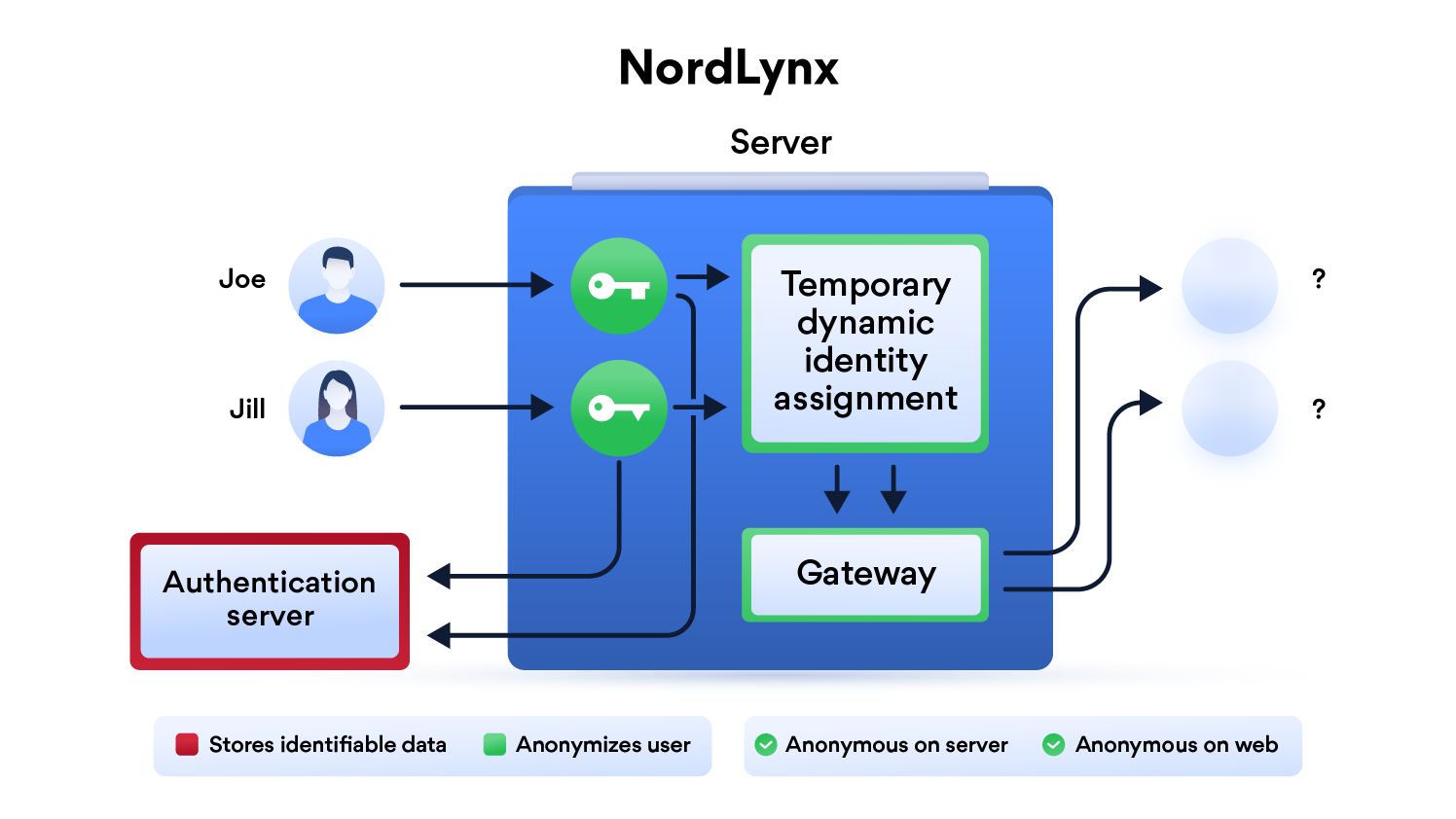 To get around this, Nord uses a ‘double NAT’ system which, frankly, is too complex to go into here but solves the problem and ensures no personal data is stored on the server. Nord helpfully supplied the above image to show how it works.

Best of both worlds? Oh yes.

( ExpressVPN has also been developing its own new protocol – Lightway.)

Just how fast is NordLynx?

Nord has published the raw data from over 250,000 tests conducted in March and April 2020. Fortunately it has also analysed them and distilled the results into a few graphs.

They show that NordLynx does indeed outperform OpenVPN and IKEv2, both for upload and download speeds, and it can achieve twice the throughput of IKEv2 and OpenVPN when the content server (such as a website or game server) is close to your physical location.

That’s what the scatter graph below demonstrates: when the distance between the VPN server and content server is less than around 2000km, NordLynx offers between 200 and 300 Mbit/sec download, but OpenVPN and IKEv2 can deliver only around 70-140 Mbit/sec. 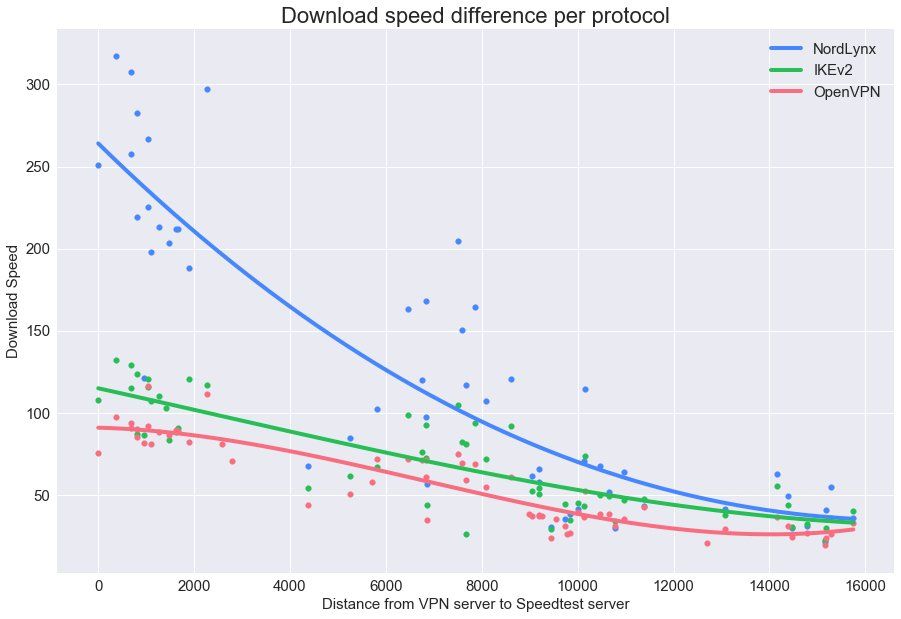 It also shows that all three protocols offer similar speeds when you’re connected to a far-away server, so you’ll only get a noticeable benefit when connected to nearby servers, such as those in the same country as you.

Don’t forget, too, that as Nord’s blog post about the results explains, your own hardware can limit the speeds you’ll see. If your internet connection at home is only 70Mbit/sec, for example, you can’t really benefit from NordLynx.

The bottom line, though, is that this is an upgrade that all Nord customers get for free and will be able to use on all their devices: iPhone, Android, Windows, macOS and Linux.

And as long as it’s as secure as Nord claims, that has to be a good thing.

Right now you can get 70% off NordVPN, so if you’re not already a subscriber or are looking to renew, now’s a great time.