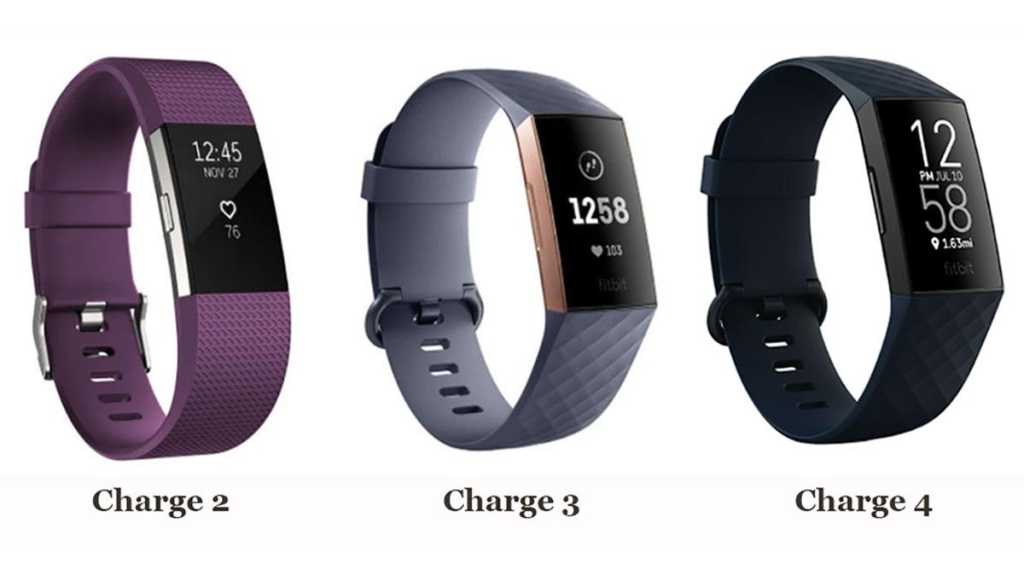 With the new Fitbit Charge 4 now on the scene and looking to steal the crown from its predecessors, we thought we’d see how the last three generations of Charge stacked up.

To look at, the Charge 3 and Charge 4 are nearly identical in their design. When you put the two next to each other, it’s near-enough impossible to see any real difference with regards to appearance.

According to Fitbit, the Charge 3 was 1.41in high, while the Charge 4 is only 1.4in. The Charge 3 was 0.89in wide too and yet the Charge 4 is 0.9in – the differences are so slight here that this may just be the company rounding to the nearest decimal. The wristbands are compatible between models, so let’s say they’re the same size.

The Charge 4 is a little lighter (44g vs 47g), with the tracker housed within a plastic resin case, rather than aluminium. The material change might irk some but in real-world use, we’d prioritise unobtrusiveness and less weight over more premium materials, as far as activity trackers are concerned.

The Charge 2 has a physical button rather than the less-obvious inductive button, which means it’s not swim-proof, like the Charge 3 and Charge 4. It’s also a much thicker tracker, with a higher rise on the wrist.

In a first for Fitbit, the charging cables are the same across both the Charge 3 and Charge 4, the longer-handled charger that comes with the Charge 2 is not cross-compatible.

The functional differences between the Charge 3 and 4 really fall to the addition of built-in GPS and Spotify controls, plus the new Active Zone Minutes metric and contactless payment support across the entire Charge 4 range (the feature was previously only available on the special edition Charge 3).

Beyond that, they both offer up to seven-days battery life, fitness and sleep-tracking capabilities, up to 50m water resistance and 24-hour heart rate tracking as standard.

As for the Charge 2, the display is smaller and tap-only, instead of a fully-fledged touchscreen, meaning you can’t do as much on-wrist as the Charge 3 or 4, instead having to switch to the app to set goals and the like. Battery life tops out at five days per charge, rather than seven.

If you don’t need the GPS (for super-accurate distance measurements of your run/walk/cycle, and the ability to leave your phone at home), are happy to just connect your Charge 3 to your phone’s GPS, and you can live without Spotify controls on your wrist, then we wouldn’t recommend upgrading to the new tracker, as the other features remain relatively similar.

If the Active Zone Minutes feature appeals, then maybe you can move up to the Charge 4 and give your old tracker to a friend or family member. If, however, you own a Charge or Charge 2, the new model is a must. The 3 and 4 have displays that are 40% larger than that of the Charge 2, and they are at least 20% lighter due to the newer casing materials at play, rather than stainless steel.

Of course, the 4’s arrival also means that Fitbit no longer lists the Charge 3 on its web store. The Charge 3 is still available from a number of other retailers, however, and at a decent discount too, with prices as low as £90/US$117.