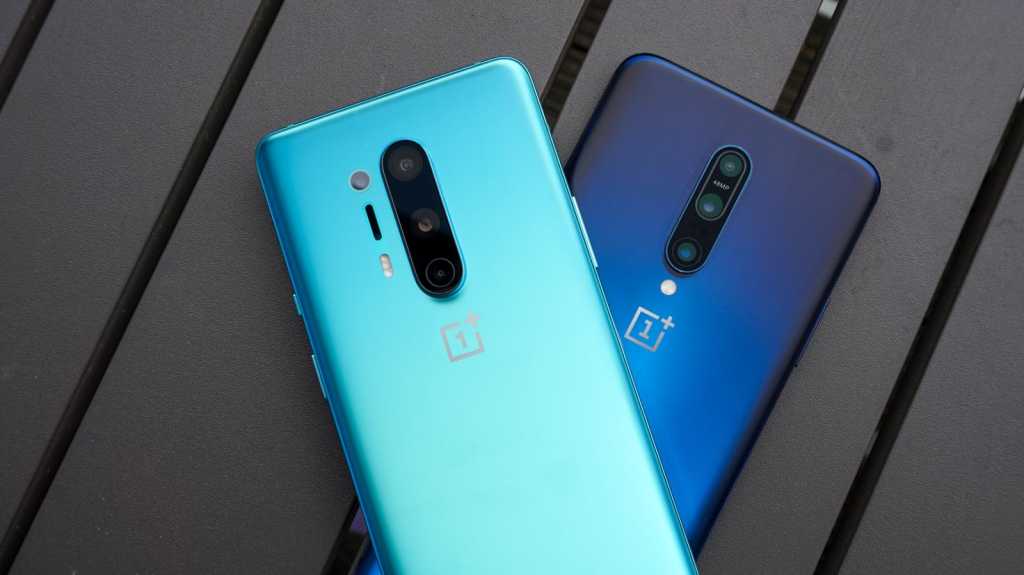 The OnePlus 8 Pro is here, and it’s a doozy. With an IP68 rating and wireless charging – not to mention a 120Hz refresh rate – it pulls off a few firsts for the brand.

But with a higher price to match the fancier features, how does it compare to last year’s 7 Pro and similar 7T Pro? Whether you already own one of last year’s phones, or hope to buy one for cheap now that the 8 Pro is here, here’s how the 2020 flagship compares to 2019’s best.

This is one of the simplest comparisons, as the 8 Pro looks an awful lot like both of last year’s phones.

The broad design is almost identical, with a 6.7in curved display, slim bezels, and a central column of cameras on the coloured rear. The 8 Pro is slightly thinner and taller than the other two, and a few grams lighter, but really these are all about the same size.

The biggest difference is that the 7 and 7T Pro both use a pop-up selfie camera, leaving the display completely uninterrupted, while the 8 Pro instead opts for a corner cut-out camera – a necessary concession to secure its IP68 waterproof rating.

There are smaller changes throughout the rest of the build – the alert slider is a little shorter on the 8 Pro, the speaker grille is slightly different, and the rear camera module is bulkier, with an extra lens to the side of the main array. It also features the new all-caps OnePlus logo at the bottom.

Otherwise, the design choice really comes down to colour. The 7 Pro is available in grey, blue, and almond, while the 7T Pro only offers a slightly different shade of blue and the McLaren special edition. Meanwhile the 8 Pro comes in green or black finishes in the UK, though other countries get a vibrant blue (a third distinct shade of blue, for those keeping count).

Display is where the phones begin to pull apart a little. Yes, the screens are about the same size – the 8 Pro’s is fractionally taller (a whole 48 pixels!) but not enough to notice – but the tech underlying them is more different.

The 7 and 7T Pro both run at 90Hz refresh rate, which was impressive at the time. The 8 Pro outdoes them both by offering an even smoother 120Hz refresh rate, for even better scrolling and fluidity. In all honesty, the jump from 90- to 120Hz is harder to spot than the gap from 60- to 90Hz, but the keen-eyed might appreciate the difference.

Colour accuracy and brightness have both also been improved though, meaning that even without factoring in the refresh rate the 8 Pro looks brighter and more appealing no matter what you’re doing. The difference is pretty stark when you set them side by side in person.

In terms of other core specs the progression is mostly what you’d expect. The 8 Pro is powered by the Snapdragon 865 chipset, an upgrade from the 855 in the 7 Pro and 855+ in the 7T Pro.

The 865 offers 5G support, meaning every 8 Pro supports 5G networks. That’s slightly different to the previous phones, which only offered 5G in more expensive variants: the 7 Pro 5G and the 7T Pro McLaren Edition. The 8 Pro is also the only one of the three to support faster Wi-Fi 6 connections.

All three phones offer the choice of 8GB or 12GB RAM and cap out at 256GB storage, so while the specific setups vary a little the range is similar. The 8 Pro does use faster LPDDR5 RAM, but few will notice the difference.

Battery capacity has had a big upgrade this year though, jumping from 4,000mAh and 4,085mAh in the 2019 models to 4,510mAh this year – though any gains in battery life are mostly negated by the demanding 120Hz display.

Wired charging is essentially the same, with 30W charging across all three devices and only minor differences in performance between them, but the 8 Pro has the extra benefit of wireless charging. This will go up to 30W with OnePlus’s own wireless charging stand (sold separately), or up to 10W on universal Qi chargers.

Cameras are another area where things get a little different. The 7 Pro and 7T Pro include identical setups on the rear: a 48Mp main sensor, 16Mp ultrawide, and 8Mp 3x hybrid telephoto.

The 8 Pro adopts a similar configuration, but steps up the specs. The main shooter is still 48Mp, but uses Sony’s newer and larger IMX689 sensor, meaning it can deliver better dynamic range, especially in lower light.

The ultrawide is now 48Mp – in fact using the same IMX586 sensor used for the main cameras last year – while the telephoto remains at 8Mp and 3x zoom, and in fact seems to be identical to last year’s.

The 8 Pro also adds an additional fourth lens: a 5Mp colour filter camera used to create Instagram-style filters – it’s hard to imagine this getting much use though, let’s be honest, when software options can achieve the same result.

Video options are broadly the same between all three, going up to 4K@60fps on all three. Unlike some other Snapdragon 865 phones the 8 Pro doesn’t support 8K recording – at least not at launch.

Then there’s the selfie camera. While it’s moved from a motorised pop-up to a punch-hole design in the 8 Pro, it remains 16Mp, though the aperture has shifted from f/2.0 to f/2.45. That suggests that all three phones should offer similar levels of detail for selfies, but the older models might actually trump when it comes to low-light and dynamic range.

There’s really not a lot to say about software. All three phones now support Android 10, and run on OnePlus OxygenOS on top of that.

The 8 Pro brings with it a 10.5 version that expands dark mode support and adds dynamic wallpapers, but expect these features to roll out to the older phones anyway.

The only real software consideration is that the more recent devices will get security and other software updates for longer, so there’s a bit of future-proofing there.

Finally, price – the big one. The OnePlus 7 Pro started from £649/$669 for its basic setup with 6GB RAM and 128GB storage, while the 7T Pro jumped slightly to £699, and never came out in the US beyond the $899 McLaren Edition. Of course, it’s often possible to get either for less now as they go on offer too.

For that extra spend above the 7 models you get waterproofing, wireless charging, and decent improvements to both camera and display. That’s probably not enough to justify an upgrade for most 7 Pro or 7T Pro owners, but if you don’t own either yet there’s a lot to tempt you into spending extra on the 8.