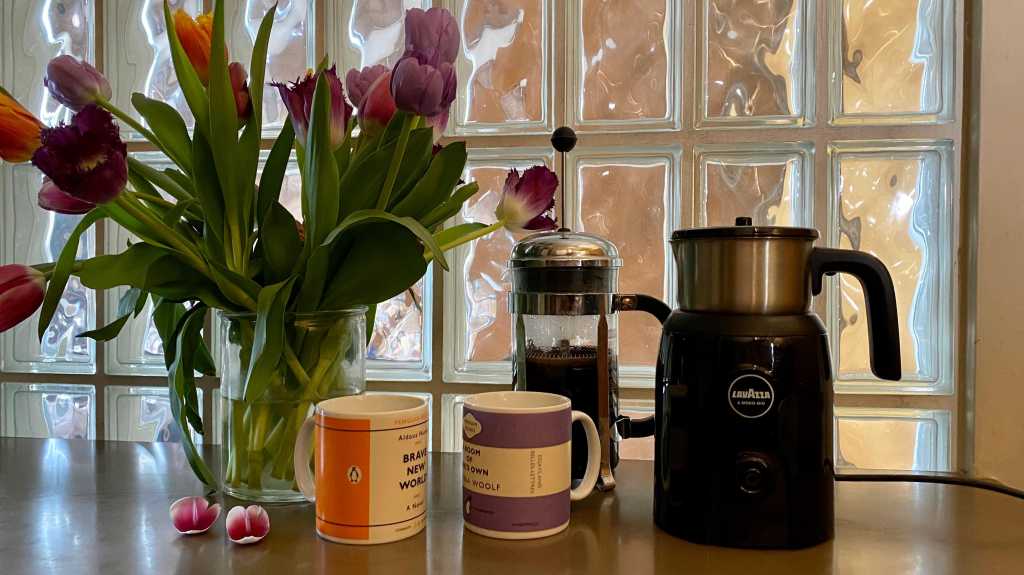 As far as home coffee making goes, a milk frother is probably not the first thing you think of – in fact, you might not consider it at all.

After all, coffee is about coffee. And that’s the first thing to sort out in your home set-up. If your supplies are looking worryingly low, you may want to consider a coffee subscription service. We can recommend 200 Degrees Coffee, which delivers fresh roast to your door.

Once you’ve got your coffee sorted, the next step is how you brew it. If you don’t use a cafetière, you could do worse than investing in a coffee machine. For advice on buying a coffee machine, read our guide and have a look at the best machines we’ve tested and reviewed.

A number of machines don’t have an inbuilt milk frother, and if yours doesn’t, you’ll be surprised at what a difference hot, frothed milk makes to a coffee. You can make a barista-quality latte, cappuccino or macchiato at home. To complete the experience, why not misspell your own name in marker pen on your mug?

We tested the Lavazza MilkUp, an attractive little countertop device (22cm high by 15cm in diameter) that comes in black or white. It’s a very simple, one button device. But it still gives you a number of options: you can choose to warm the milk or not and have it fully frothed or just gently aerated.

It works on all the types of milk we tested: full fat, semi-skimmed, oat, almond and soya, although there was a bit of variation in the amount of foam produced from each. It also worked well for making hot chocolate.

All of the parts except the base are dishwasher-safe but they’re also easy to clean by hand.

You can buy it from John Lewis, AO.com and the Lavazza site. Its RRP is £59.99 but AO.com currently has the best deal, at £55. Is it worth the price? Yes. It’s the milk equivalent of a coffee machine, in that you’ll get a perfect beverage every time. It has completely transformed my morning caffeine fix.

Upgrade your brunch or have an indoor barbeque

Brunch is obviously the ideal meal because it’s breakfast food that you can eat pretty much any time of day. Purists will say that you can’t have brunch after 3pm. As it turns out, restaurants agree with them (even if you look very sad and hungry). Probably the only good thing about life now is that you can have brunch whenever you want. Make the most of it.

We tested out the George Foreman indoor smokeless barbeque grill. You can currently buy it from retailers including Argos (for £64.99) or Very (for £69.99).

The first thing to say about the grill is that it’s massive (66cm by 34cm). The advantage of this is that you can cook an entire meal on it. But it’s also something to bear in mind if storage space in your kitchen is at a premium. You need somewhere to stash it on the rare occasions you aren’t cooking yourself an enormous brunch.

All you do is plug it in, choose a heat setting and stick your food on the grill. It starts sizzling but crucially, does not smoke and your food will be cooked with perfect, charred barbeque lines. A countertop grill gives you a method of cooking that you just can’t get using an oven. It really is an upgrade in terms of both taste and appearance.

The grill can also be used as an indoor barbeque. That makes it very useful for people who live in flats or don’t have enough outdoor space to barbeque at home. (That would include my neighbour, who has a full-size barbeque on a tiny balcony and whose plan is presumably to burn down the building.)

It would also be handy for times when the weather lets you down or over-zealous barbeque-ing leads into a pagan frenzy of fire worshipping and inedible, charred meats.

After using it, you can take it apart, wipe it down and, according to the instructions, stick it in the dishwasher. This is a bit unnerving because the grill itself has a connector for the plug point. The manual cheerfully suggests that after dishwashing, you make sure that the power inlet is completely dry before plugging it in again. As I’m not a huge fan of electric shocks, I did not test that out, instead opting to wash it by hand.

This Russell Hobbs appliance is a 3-in-1 device. It’s a sous-vide and a slow cooker and it can be used to roast joints of meat with its temperature probe. Its RRP is £99.99, which is a pretty good price point for a product with this much functionality packed in. It’s available from sites including Currys PCWorld.

Experts agree that the absolute best way to cook a steak to perfection is to use a sous vide and then finish the steak off in a pan.

I tested out this claim.

The first thing to note is that the appliance does not come with pouches to use with the sous vide function. So you’ll need to invest in those. You can opt for Ziploc bags, which are cheap and easy but not very environmentally sound. Or you can go for silicon pouches, which are reusable but a bit more difficult to use, or you can invest in a vacuum pack machine.

The latter option manages to be both more expensive and not at all environmentally friendly (the bags are one use only). But this is a problem common to all sous vide cooking.

You fill the cooking pot with water at roughly the recommended temperature and the LED display will let you know when it is ready for your steak.

You add it, plunge the thermometer through the aperture in the lid and leave it to cook.

Simple. That is, unless you managed to puncture the bag with the thermometer but didn’t realise. But you wouldn’t do that, would you? And nor would I. Obviously.

The second time I made steak, it worked as promised and I did indeed end up with a restaurant-quality, succulent piece of meat.

The problem with a sous vide is that, although it is a fantastic bit of kit when you want to cook something special, you’re probably not going to use it every day. Unless you want to DIY a sous vide in a plastic tub with a bunch of ping pong balls, it’s a big, single-function piece of equipment that will take up space and maybe get forgotten.

That’s one of the reasons I’d recommend this Russell Hobbs appliance. It’s also a slow cooker. Most people are now aware of the benefits of this kind of cooking. First off, the appliance uses less electricity than an oven and won’t heat up your kitchen as much, which is a huge benefit in the summer.

It’s also a time-saver as you can just fill it with ingredients, set it and leave it to cook overnight. At the moment however, saving time on cooking isn’t really something we’re thinking about as we have nowhere to go. But hopefully – and sooner rather than later – that’ll change and we’ll all be complaining again about how busy we are and that we have no time to cook.

Also, if you’re anything like us, you’ll have found yourself wandering to the fridge several times a day (okay, fine – several times this morning) and hanging over its contents, absent-mindedly scanning for snacks. So if trying to eat more healthily is a goal for you, a slow cooker can help.

The Russell Hobbs slow cooker is big – you could use the cooking pot as a baby’s bath or an ornamental pond (note: I have not tried this) – so you can cook soup or casseroles and portion them out, ready to be heated up whenever you want. It’s a solid addition to any kitchen.