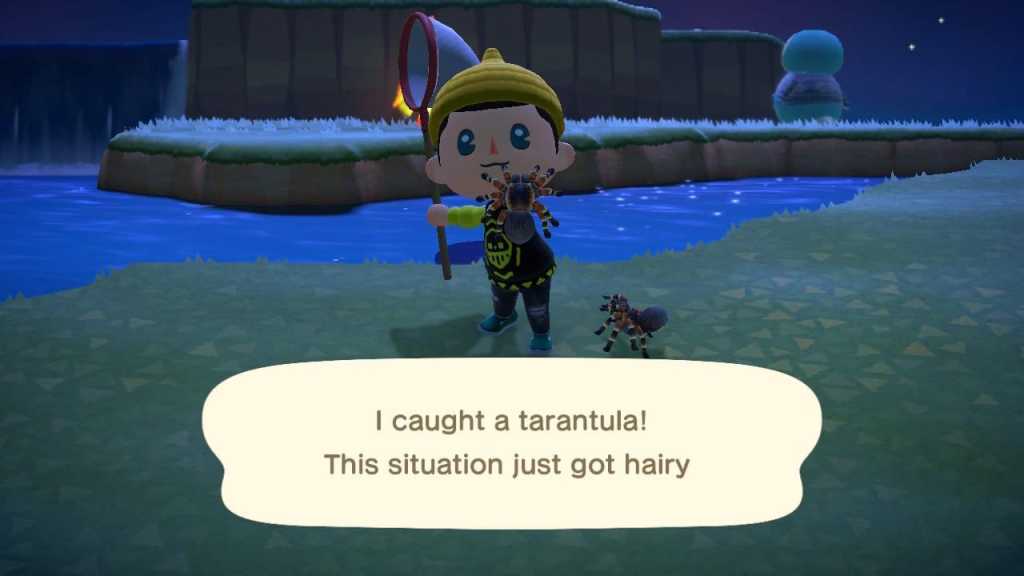 If you’ve been playing Animal Crossing: New Horizons for a while now, you might be getting to the point when you really need more Bells in order to pay off Tom Nook’s increasingly hefty loans. There is one sure way to get a huge number of Bells in a relatively short space of time, and that’s a Tarantula Island. Let us explain more.

Tarantulas are worth a lot of money in Animal Crossing. 8,000 Bells each, in fact. They’re tricky to catch, and if you’re not speedy enough you’ll faint and wake up back at your house or at the beginning of an island, where you’ll be hard pressed to find the tarantula again.

Unless, that is, you find yourself on a Tarantula Island. There, you’ll have so many tarantulas to catch that you can fill your pockets to the brim and return home with enough to get you hundreds of thousands of Bells at once.

Growing a money tree is another good way to get more Bells in Animal Crossing.

It is possible to come across a Tarantula Island simply by using a Nook Miles Ticket at the airport to take you to a random Mystery Island. But it is a rare occurrence, and one you’re unlikely to encounter again for some time. 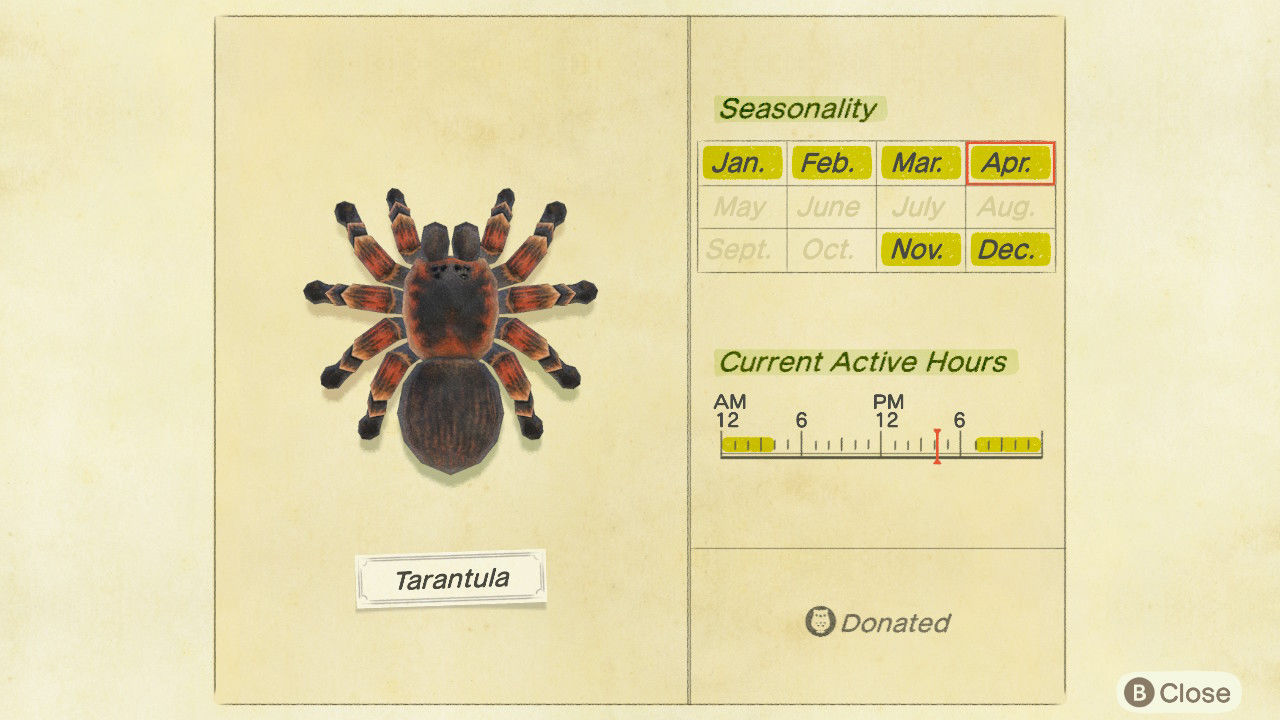 There is a trick to getting tarantulas to appear on almost any Mystery Island you arrive on, though. First you’ll need a few things: a net, a shovel, an axe, a pole and a ladder, as well a Nook Miles Ticket. If you have a bin, take that too!

Use the Nook Miles Ticket at the airport to get transported to a Mystery Island after 7pm. Before 7pm, tarantulas are in hiding and won’t appear. Additionally, you’ll need to do this before April ends, as tarantulas won’t reappear on the game until November.

When you arrive, take a look at your surroundings. Can you see any bugs at all? If the answer is yes it’s likely you can make yourself a Tarantula Island here. Initially we thought the island needed to be clear of residents too, but we’ve managed to create one even with another character roaming around.

Now you need to get to work clearing the island of absolutely everything you can see. Plonk it all into one corner, or, if you have a bin, chuck it all in there!

We’re talking weeds, trees, rocks, flowers – absolutely everything. Make sure you pick all of the flowers to stop them from attracting bugs. You can eat any fruit you find to make yourself strong enough to smash the rocks. To dig up the trees, use an Axe (not the Flimsy Axe or Stone Axe as these won’t work) to chop the tree down to a stump, then use the shovel to dig the stump up. 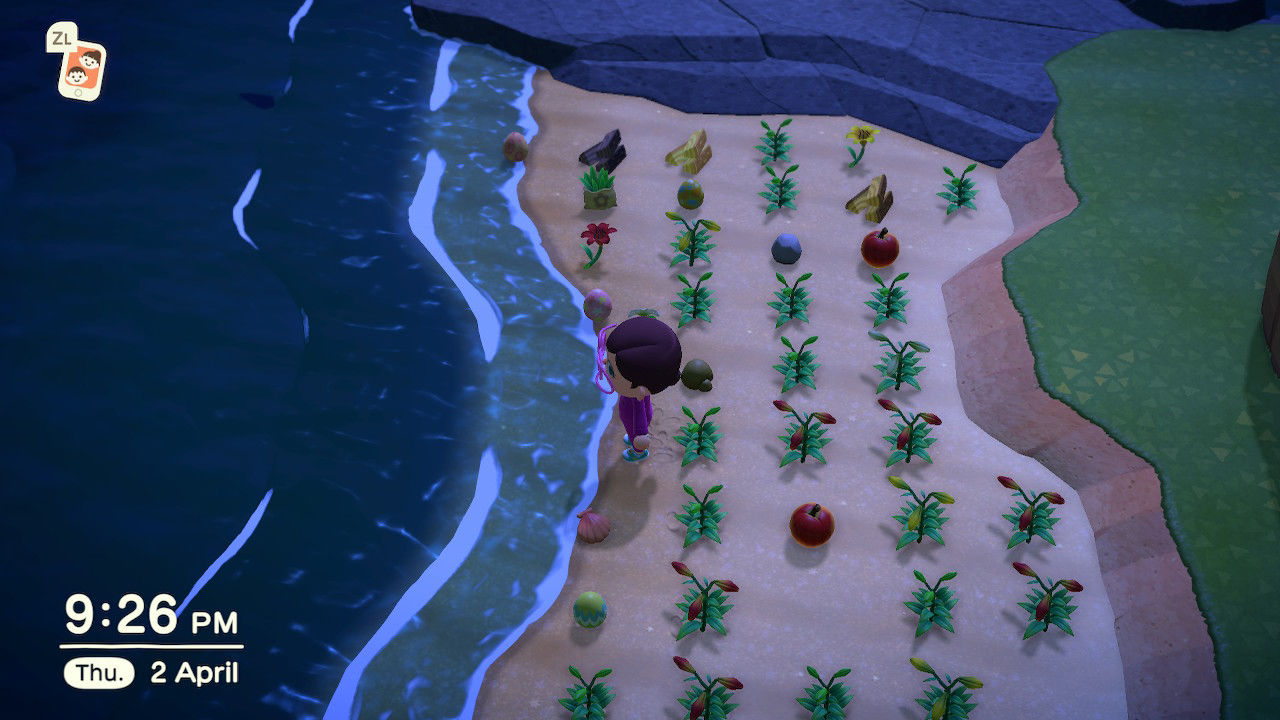 Once everything is out of the way it’s time to scare away any bugs you see. Run around, wave your net at them, get them all to leave the island and make room for tarantulas. You’ll need to do this lots and lots of times, and unfortunately as of 1 April we’ve got a new bug that makes this pretty frustrating: giant water bugs. You can’t scare them away so you’ll have to catch them when they spawn.

The good news is that giant water bugs still sell for 2,000 Bells, the bad news is they spawn really regularly and make the whole process of catching tarantulas quite a bit slower.

If it works, you will soon know. Before long, tarantulas will begin appearing one after the other. It won’t take long for you to fill up your pockets (although we’re sure you’ll faint a few times while you’re at it, those tarantulas are sneaky).

We’d recommend getting rid of everything else in your pockets to make space for as many as you can – you don’t need any of your tools apart from a net at this point, so chuck them all out.

At the very end, when all you have left is a net and your tarantulas, you can go back and pick up the most valuable thing you want to take back with you. Perhaps Iron Nuggets. Swap those with your net and you’ve got yourself one hell of a Pocket full.

Head home and pay a visit to Tommy and Timmy to bag yourself a huge amount of Bells in exchange for your spidery goods.

If you’ve yet to get your hands on a Nintendo Switch or Animal Crossing, take a look at the best Switch deals or buy Animal Crossing from Amazon or Nintendo.