The Galaxy S20 phones pack in a lot of new features and tech, so whether you’re new to Samsung or are upgrading from an S10, you might find it a bit overwhelming at first, with Samsung’s feature creep starting to set in and overload the options menus.

Luckily I’ve spent some time with the S20 Ultra, and done my best to figure out all the phone’s best bits. So here are my top ten tips to make the most out of any of the Galaxy S20 phones.

1. Turn off the Bixby button

OK, so technically speaking the S20 phones don’t have a Bixby button. But they might as well do, as by default Samsung has set the power button to open Samsung’s little-loved virtual assistant rather than turn the phone off.

To change this, open Settings and head to ‘Advanced features’. The first entry is ‘Side key’, which is what we’re looking for. In here you’ll find the option to set holding the power button to actually open the power menu, along with the extra ability to set a double tap of the button to open the camera, open Bixby, or open any app of your choice. 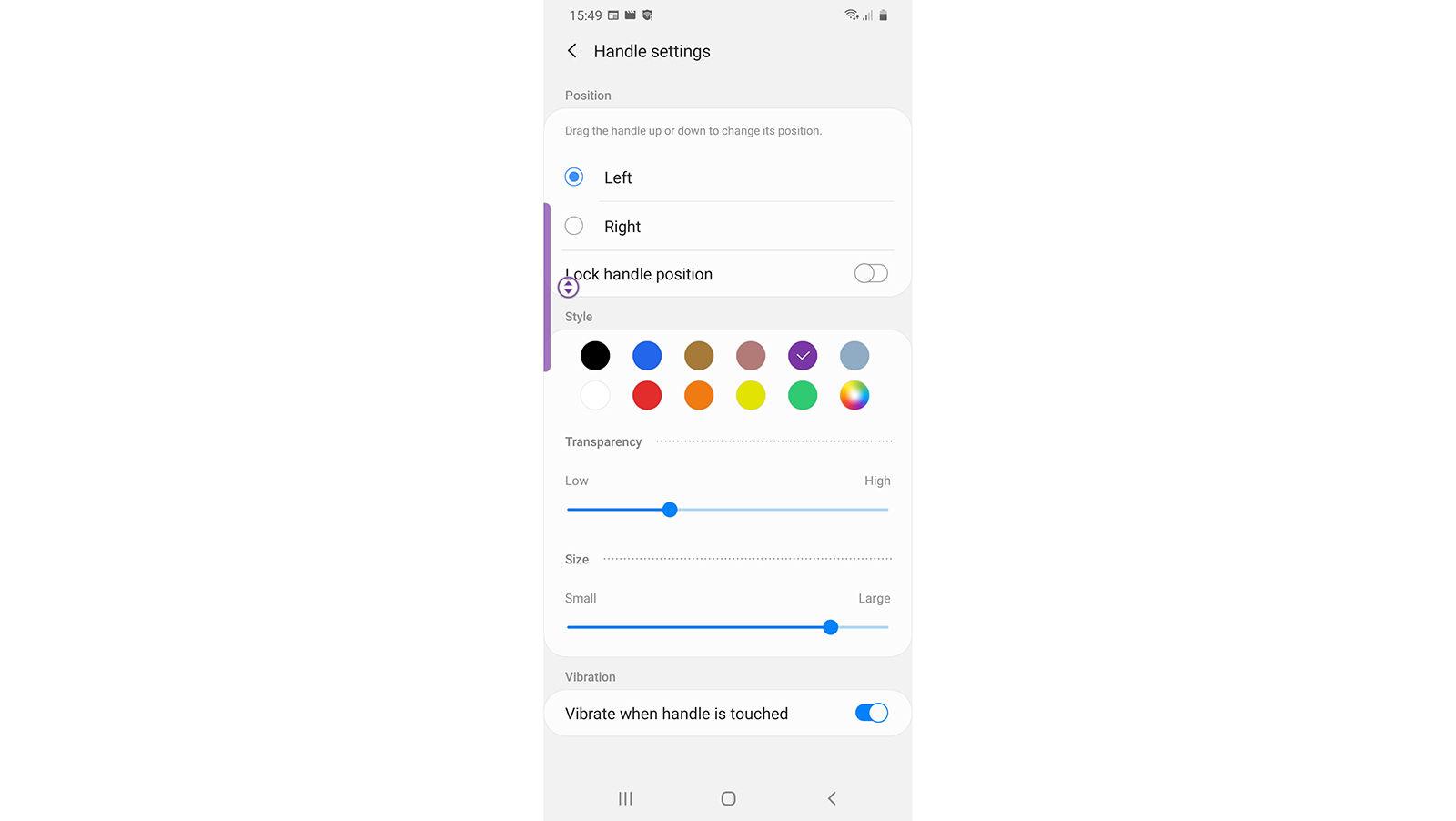 Edge panels aren’t new to the S20, but they’re still an under-utilised bit of Samsung’s One UI operating system, and they’re much more customisable than you might think.

Swipe in from the top-right of the screen to open the Edge Screen, which by default gives you shortcuts to a few apps. But did you realise that swiping again now cycles through a couple of other Edge Panels with handy shortcuts for screenshots or extra tools?

Tap the gear icon in the bottom left to find options for even more tools you can add in. From there tap the three dots in the top right, then ‘Handle settings’, and you’ll be able to change which side the Edge panel opens from, change the position and size of the bar, lock it into place, and even change its colour and transparency.

Samsung didn’t add too many totally new software features with the S20 series, but Quick Share is one of the big ones. This is a handy file sharing tool that’s essentially a Samsung take on AirDrop.

You’ll find it by default in the Quick panel that you access by swiping down from the top of the screen. Swipe to the second screen of buttons to find Quick Share and turn it on, or hold down on the icon to access its settings: simply deciding whether or not people other than your contacts can share files with you, and changing the name your device will appear with.

While Quick Share is on, you can find the option to use it any time you access the sharing menu on a specific file. The downside? It only works with other devices that use Quick Share, which means other Samsung Galaxy phones running One UI 2.1. So you can’t share with iPhones, other Android phones, or even older Samsung devices that haven’t been updated to the latest software.

Music Sharing is one of the other big new features, though it shares the same limitations as Quick Share. It essentially lets other people connect to your Bluetooth speaker or headphones through your phone.

You’ll also find it on the second screen of the Quick panel, and the first time you turn Music Sharing on you’ll be given a few configuration options. As for actually using it, once you’ve turned it on your friend should open Bluetooth and look for the name of the speaker they want to connect to. If they tap that, they should connect via your phone.

Music Sharing is most useful in a car or with other speakers that are a pain to pair to, as it means that friends and family can quickly connect to your phone rather than going through the bother of pairing to the speaker themselves. As with Quick Share though, they need a compatible Samsung Galaxy phone, and you’ll also both need to leave Wi-Fi and Bluetooth on.

All of the S20 phones have impressive cameras, but you might not realise that you can get more out of them with a few shortcuts from within the camera app.

Even if you’re on the photo mode, you can hold the shutter button to start recording video without changing modes. Hold and pull down towards the bottom of the screen and it will instead quickly capture a load of photos to create a GIF, while if you hold and drag elsewhere you’ll create a second floating shutter button that you can position wherever is most convenient.

One final trick I like, though it’s a small one, and certainly not exclusive to the S20. Zoom is a major part of all three S20 models’ cameras, with the Ultra going all the way up to 100x. That’s awkward to manage with the usual pinch-to-zoom, so instead remember that if you hold the icons to switch lenses it will switch into a zoom slider, giving you some fine-tuned control of your exact zoom level.

Speaking of cameras, not everyone loves Samsung’s decision to keep using a punch-hole selfie camera, or the move to make it central. I can’t help you change where the camera is, but you can at least hide it a little.

To do so, open Settings. Then head to ‘Display’, then ‘Full screen apps’. From there tap the dot menu in the top right and select the only option, ‘Advanced settings’. Here you’ll find just one setting, but it’s what lets you hide the camera cutout, replacing it with a black bar across the top of the screen, just like an older bezelled phone.

One of the headline new hardware features in the S20 range is the high refresh rate display, which goes up to 120Hz for smoother scrolling and more fluid animations – especially while gaming.

To control the refresh rate, go to Settings, then ‘Display’, and then ‘Motion smoothness’, where you’ll get a choice between the standard 60Hz and the faster 120Hz, which will look better but burn through more battery – about 10% of the charge over the course of a day, from my experience on the S20 Ultra.

Here’s another feature that isn’t S20-specific, but is worth knowing about. The phones have an always-on display active by default to show the time and notifications, but it isn’t actually always on – you have to tap the screen to turn it on.

If you want to change that, you can. Open Settings and then head to ‘Lock screen’ – not display settings, despite what you might expect – and then you should see ‘Always On Display’. There’s a toggle to turn it off outright, or you can select it to go through to more granular settings.

By default it’s set to ‘Tap to show’ but you can also have it display constantly (at a hit to battery) or schedule it so that it switches off overnight or at other times you don’t need it. 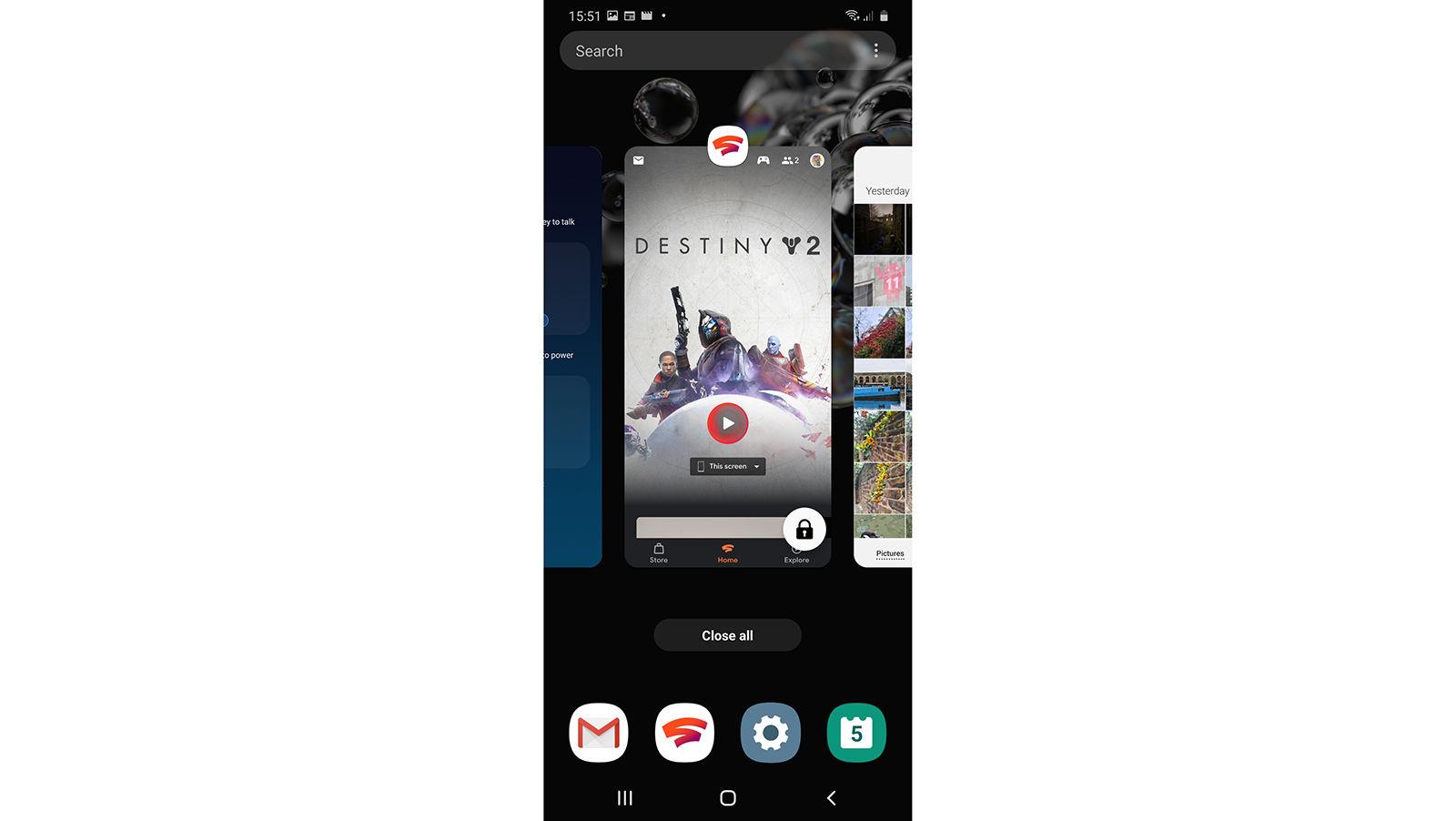 There’s only one feature that we think might be exclusive to the S20 Ultra – we’re trying to confirm this – and it’s the option to save apps into the phone’s RAM. This lets you open them faster, and the phone will save them exactly as you left off so there’s no extra loading or risk of losing the point you were at in your game (or Twitter timeline).

To do so, access your recently opened apps by swiping up from the bottom of the screen and holding (or tapping the icon if you still use buttons). Select the app you’d like to store, and tap its icon above the window, then select ‘Keep open for quick launching’.

You can save up to three apps like this on the 12GB Ultra, and up to five on the 16GB model. If you want to un-save any, simply tap the padlock item at the bottom right while in the same view.

To round out the list, here’s another feature that’s definitely not new to the S20, but is still a bit unusual outside of Samsung’s flagship phones.

Reverse wireless charging – or Wireless PowerShare as Samsung dubs it – is a nifty feature that lets you use your phone to charge other bits of wireless charging kit – including Samsung’s own Galaxy Buds+ headphones.

You’ll find it in the Quick panel at the top of the homescreen, and a simple tap turns it on. Then just set the phone face down and rest the device you want to charge on the phone’s rear, right in the middle.

Remember that this will of course drain your phone’s battery. If you hold down on the PowerShare icon you can get to the system’s settings page though, which lets you set a battery limit between 30% and 90%, meaning that if the phone drops below that level it will stop charging other devices to save its own power.