Huawei has revealed the Mate Xs, the latest in what we imagine will be a long line of foldable smartphones to come to market in 2020 and beyond. It’s not a complete redesign of last year’s model, but that’s no bad thing considering the Mate X was one of the best-looking phones around, foldable or not.

The issue is that even with what many would consider minor changes, Huawei has increased the already-eye-watering price tag with the Mate Xs, ripping an otherwise incredibly exciting phone from the hands of everyday consumers.

The Mate Xs is more durable than ever

So, what has Huawei changed with the Mate Xs? The headline changes are an improved display and improved ‘Falcon Wing’ hinge system, looking to further protect the flexible display and internal components from damage over time. It’s a crucial aspect of any flexible smartphone, as the Samsung Galaxy Fold showed us back in 2019 when the initial batch of review samples fell apart within days of being sent out to reviewers, and it seems something similar is happening with the Motorola Razr too.

The 8in “aerospace-grade” OLED Flex Display introduces a two-layer polymer structure that sits atop of the flexible OLED panel with the aim of protecting the interior from impacts big and small. It’s an aspect of the phone that Huawei had to put serious thought into, especially when you consider the display is wrapped around the outside of the smartphone and not the inside like the Galaxy Fold and recent clamshell-esque foldables. 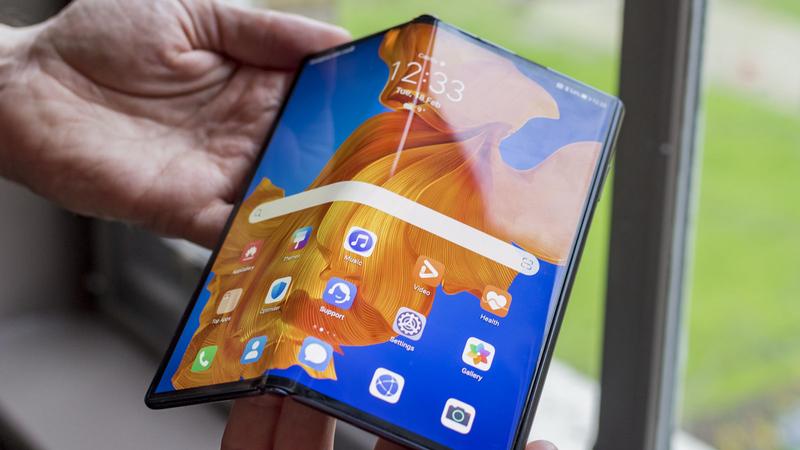 The Falcon Wing hinge, on the other hand, is made up of over 100 components and should last for quite some time – at least that’s what Huawei claims. It’ll be interesting to see how Huawei’s Falcon Wing holds up compared to hinge tech from competing companies like Samsung and Lenovo as, historically, it’s the hinge mechanism that fails first. It already makes a crunching noise, which may not bode well!

Power that’d give the Razr a run for its money

Flexi-tech aside, the Mate Xs sports flagship-level internals with Huawei’s Kirin 990 5G along with 8GB of RAM and 512GB of storage. It also sports what the company calls present and future-proof connectivity options, supporting both SA and NSA 5G technologies. The Kirin 990 5G CPU is 23% faster than the Kirin 980 from last year, and should offer similar levels of performance to the Kirin-enabled flagship Huawei Mate 30 Pro.

We certainly didn’t notice anything in terms of lag during our time with the Mate Xs, and we’ll be interested to see how it stacks up against other flagships when we get a sample back to the office to benchmark. 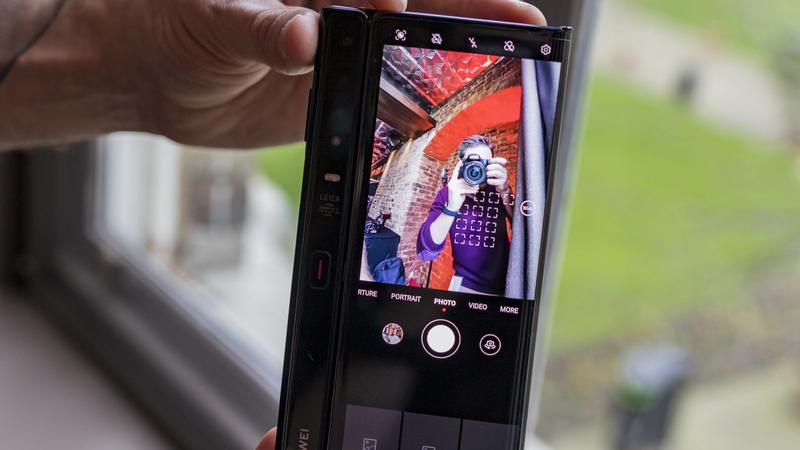 The SuperSensing Leica Quad camera setup gives other flagships a run for their money, combining a 40Mp main sensor with an 8Mp 3x telephoto lens, a 16Mp ultra-wide lens and a ToF (Time of Flight) camera to improve portrait photography and AR experiences, and you’ll find both OIS (Optical Image Stabilisation) and AIS (Artificial Intelligence Stabilisation) on offer too. The issue is that this remains completely unchanged from the 2019 Mate X, and that’s not something we’d imagine happening on a flagship smartphone – especially when it’s more expensive this time around.

The fast charging capabilities have been improved though, with the Mate Xs offering a 4500mAh battery and 55W SuperCharge that Huawei claims provides 85% charge in as little as 30 minutes. That blows not only the Galaxy Fold out of the water on both battery capacity and charge speed, but just about every other foldable on the market right now.

While the 8in display is great for gaming and watching videos, chances are you’ll be using the Mate Xs in its folded configuration most of the time. The rear-facing 6.38in display is primarily used for selfie-taking, while the main 6.6in display provides what we’d consider a standard smartphone experience, although the phone is chunky at 11mm thick when folded. Granted, it’s only 5.4mm at its thinnest point when unfolded, but who amongst us will really be carrying it around unfolded?

Tablet features on a smartphone

There are some great additions in terms of software, with Mate Xs owners able to access similar split-screen multitasking tools to those available on Apple’s iPad Pro range. 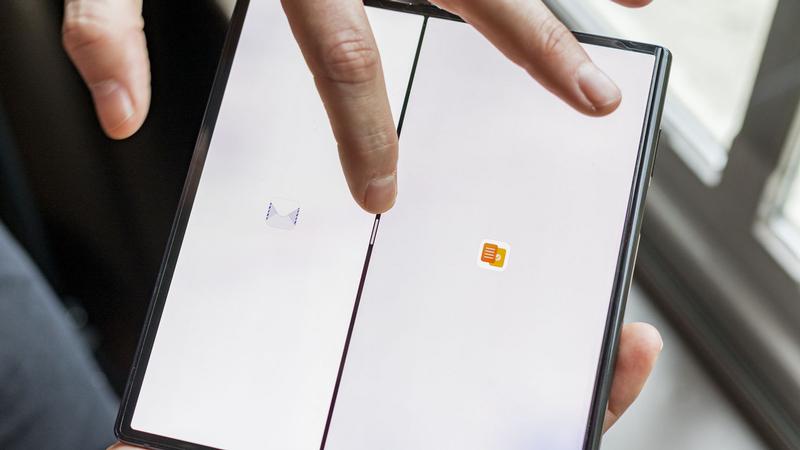 You can drag and drop two apps side-by-side, adjust the proportions of each and even drag contents from one to another, allowing you to drag photos from your gallery into an email you’re composing, for example. It’s certainly a great way to make use of the large 8in display, and improves on the existing vertical-focused split-screen tech available in Android right now. There’s also support for a floating third window, but this is limited to built-in apps like Messages and Calculator for now.

The biggest issue in terms of software is one that plagues the current Huawei range; the lack of Google Mobile Services, including the app store.

Due to the ongoing issues between the US and China, Huawei is famously unable to include Google Play – including features like Google Assistant and Google Pay as well as the likes of Gmail, YouTube and third-party apps – in any new phone releases. This severely limits the attractiveness of the phone, despite the fact that there are workarounds that let you install Google Play Services on EMUI 10 devices.

Huawei’s own AppGallery looks to fill the Google-shaped void, but there’s no way it can compete with the volume of branded apps available on the Play Store. A simple search for Instagram in AppGallery shows a huge list of apps that let you steal content posted to Instagram, but there’s no actual Instagram app – and that’s the story for most popular apps in the western world. 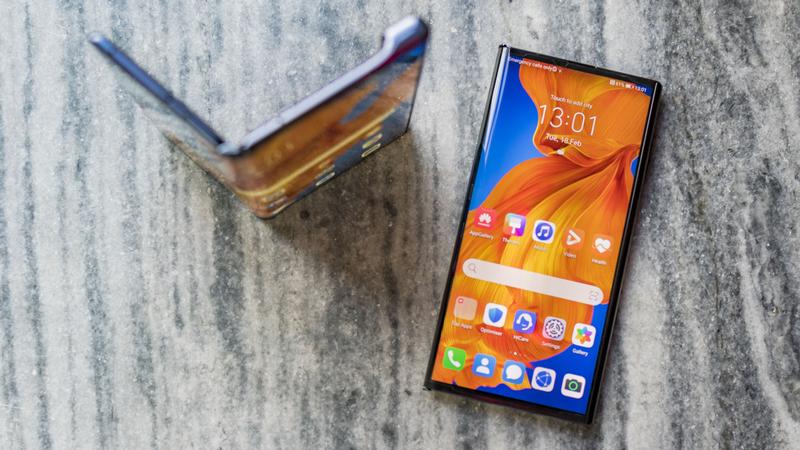 As incredible as it is, the Mate Xs is too expensive

With so many similarities between the Mate X and Mate Xs, many speculated that Huawei was focusing more on bringing the overall cost down – after all, the first-gen Mate X cost €2,299 (around £1913)  in Europe and Huawei has traditionally prided itself on offering flagship-level devices at a cheaper price point than the competition.

Sadly, Huawei has done the opposite, as despite minimal big-scale changes, the Mate Xs is more expensive than the already-expensive Mate X. At £2299 it’s the most expensive smartphone on the market, foldable or otherwise, and is well out of the range of the everyday consumer. It’s a shame that such an impressive feat of technical innovation will be exclusive to the (very) few people that can afford to slam £2.3k on a phone that could break within a few months of purchase.

Huawei, what were you thinking?