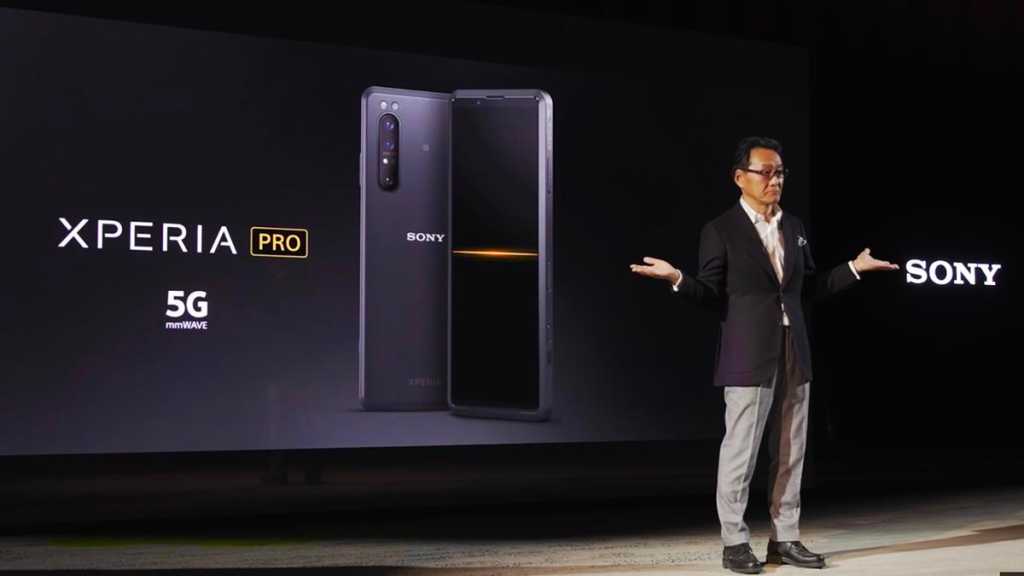 Update: Contrary to the original story’s intent – first published on 24 February 2020 – as of 6 May 2021, Sony is finally placing the Xperia Pro up for pre-order across various European markets. Head to the bottom of the article for new pricing and availability. Original article follows…

Sony’s most recent live stream may have primarily been about its new Xperia 1 II flagship, but the limelight was notably shared with another device – the Xperia Pro. For all intents and purposes, it’s the same phone, but better, so why won’t Sony sell you one?

Check out our Xperia 1 II feature for the full low-down on what the company’s latest flagship brings to the table, then read on to discover what the Xperia Pro is working with.

A phone that justifies the “Pro” name

Sony tidied its naming convention up with last year’s Xperia 1, then quickly confused things again by launching the mid-range Xperia 10 and Xperia 10 Plus, and later the high-end Xperia 5. Now we have the Xperia 1 II (pronounced ‘mark 2’), as well as the Xperia 10 II. Confused? Sony seems to be.

With this mix of numbers and numerals, the new Xperia Pro stands as a refreshing outlier. It’s arguably more deserving of the “Pro” moniker than any other phone ever released, primarily because of its intended use in professional broadcasting, rather than as a consumer smartphone.

What can the Xperia Pro do?

The few minutes that the Xperia Pro was allocated during Sony’s presentation, highlighted the key differences between it and the Xperia 1 II.

To look at, it offers a markedly similar form, with the same 6.5in 90Hz 21:9 4K OLED display, giving it a tall, slender silhouette. A thicker bezel and frame are the only real external indicators that this is a different beast. It’s much the same on the inside too, with a Snapdragon 865 processor at its heart, backed up by 8GB of RAM, plus the same 4000mAh battery to keep things running. It does, however, benefit from twice the internal storage, at 512GB of ROM.

One of the Xperia 1 II’s key selling points is the addition of 5G, but in truth, it only supports sub6 5G protocols – a faster and wider-reaching iteration on current LTE network technology. The Xperia Pro, meanwhile, also accommodates mmWave 5G technology, allowing for far greater data transfer over shorter distances.

Sony mentioned that it had already been trialling mmWave 5G technology with Verizon and NBC Sports in the US, and the Xperia Pro is the final product based on these trials.

It uses a unique four-antenna design to offer 360-degree coverage and while the Xperia 1 II reintroduced the headphone jack, the Xperia Pro boasts a microHDMI port too, allowing it to interface directly with broadcast cameras.

When is the Xperia Pro available?

For a consumer-focused presentation, it seemed odd that “Sony’s innovative solution for professionals” also got some stage time. By its very nature, it’s unlikely that the Pro will ever arrive on store shelves and instead will probably only ever appear as a purchase option through business-to-business retail channels.

Sony didn’t cite a release date for the Xperia Pro on stage but with the underlying technology already having been trialled and the similarly-specced Xperia 1 II set to launch in late Spring 2020, it stands to reason that the Xperia Pro won’t be far behind.

As for how much it’ll cost, we won’t know until it does release, however, it’s nature as a piece of professional broadcasting equipment suggests it’ll be markedly pricier than its consumer-focused counterpart.

Price and availability update – May 2021

As mentioned in the updated first paragraph of this article, it’s taken the company more than a year since the Xperia Pro’s original unveiling but Sony has now finally placed the phone up for pre-order in Europe.

The Pro initially hit the US and Japanese markets in late January of 2021, priced at US$2,499.99 and JPY¥249,800, respectively. Now the device is coming to Europe, or more specifically “the UK, Germany and Nordic regions,” according to Sony’s official press release (by “Nordic regions” Sony clarified Sweden, Finland, Denmark and Norway).

In the UK, the Xperia Pro costs a not-insignificant £2,299 and can be pre-ordered exclusively through photography specialists Wex Photo & Video, between 6 May and 13 May, after which the Pro presumably goes on general sale.

In Germany, the Pro comes priced at €2,499 and is available from a number of specialist photography retailers, collated by United Imaging Group.

In Denmark it costs DKKKr.18,999, available from retailer Elgiganten, in Finland it’s sold by both Gigantti and Fotonordic for €2,499, Norway has it priced at NOKkr24,990 and available from numerous retailers, while Sony Sweden sells it for SEKkr24,990, via Elgiganten and CyberPhoto.

Across the board, the Pro’s high price – despite the underlying hardware matching that of 2020’s flagship phones and not 2021’s – reinforces its place as a photography and videography tool over a general consumer mobile, but if you’re interested in the Xperia Pro’s unique set of skills, at least you can now finally buy one, even if Sony made fans wait.