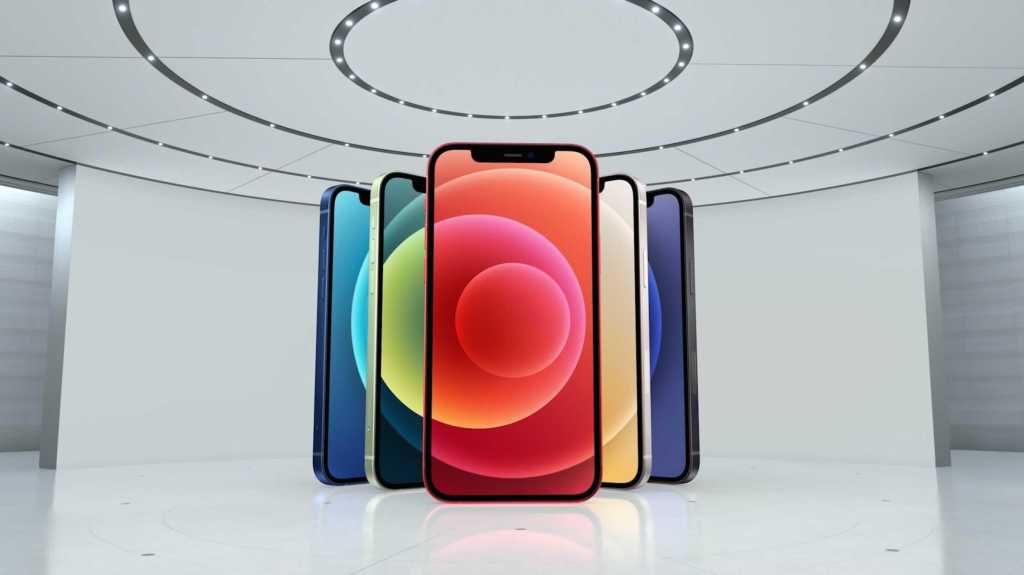 There’s a lot to unpack, but we’ve got it all covered right here. Here’s all you need to know about the iPhone 12 range, including release date, pricing and all the details about Apple’s latest smartphone collection. For more, take a look at our iPhone 12 review and iPhone 12 Pro review.

When is the iPhone 12 being released?

We’ve reviewed the iPhone 12 on our Fast Charge podcast, which you can watch right here:

How much does the iPhone 12 cost?

While there were conflicting reports prior to launch – some suggesting it’d be more expensive, while others claimed it’d be cheaper – Apple confirmed that the iPhone 12 range costs (for the most part) the same as the iPhone 11 range.

For more info, take a look at where to buy the iPhone 12, and to see how it compares to the rest of the iPhone range, check out the best iPhone. 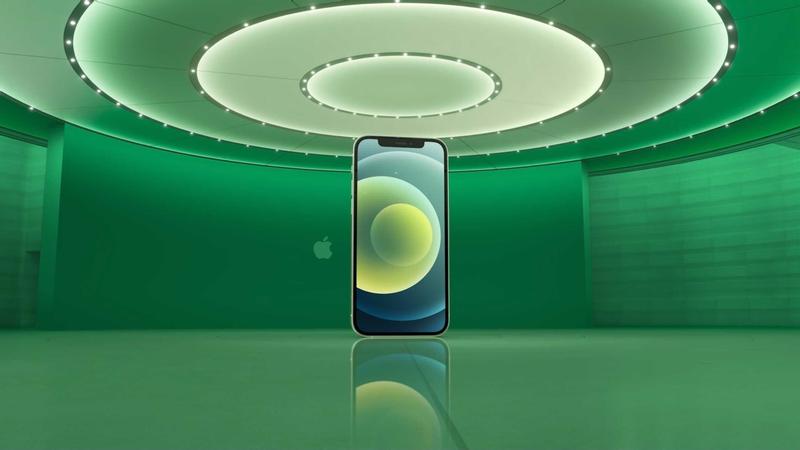 What’s new with the iPhone 12?

The iPhone 12 represents a big step forward in the evolution of the iPhone, and there are some big changes not only to the design but differences between the various models. 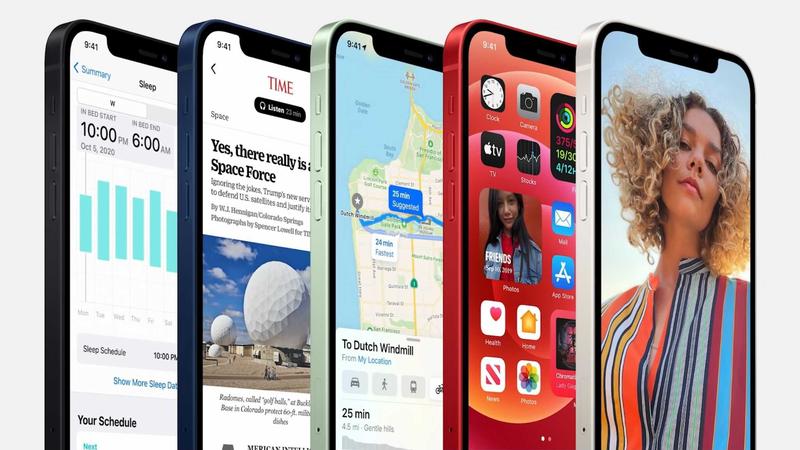 Let’s start with the iPhone 12 and brand-new iPhone 12 Pro Mini. The first thing you’ll notice is the redesign, bringing the iPhone 12 more in-line with that of the iPad Pro and iPad Air, complete with a more angular design reminiscent of the iPhone 4. Importantly, Apple’s latest iPhone features smooth flat edges and a flush finish on both the front and rear – although there is still a camera bump, so it won’t sit completely flat on a coffee table. It makes for a tidy design, and likely one that’ll feel comfortable in the hand, but we’ll have to wait until we get our hands on it to say for sure.

The redesign also allowed Apple to increase the dimensions of the display without having an impact on its overall footprint. That means the iPhone 12 has jumped from 5.8in to 6.1in with minimal changes to its dimensions, and despite the iPhone 12 Mini featuring a 5.4in display, it’s a similar shape to that of Apple’s 4.7in iPhone 8.

The display and glass rear are protected by Apple’s new Ceramic Shield, created in partnership with creators of Gorilla Glass, Corning. Apple describes the protection as cutting-edge, claiming that the glass on the front and rear of the iPhone 12 is tougher than any smartphone glass on the market, with a 4x improvement in durability compared to its predecessor, although how you quantify durability is questionable.

It’s an interesting claim, and if Apple has succeeded, it’ll be a gamechanger – especially for those that always seem to smash their iPhones. 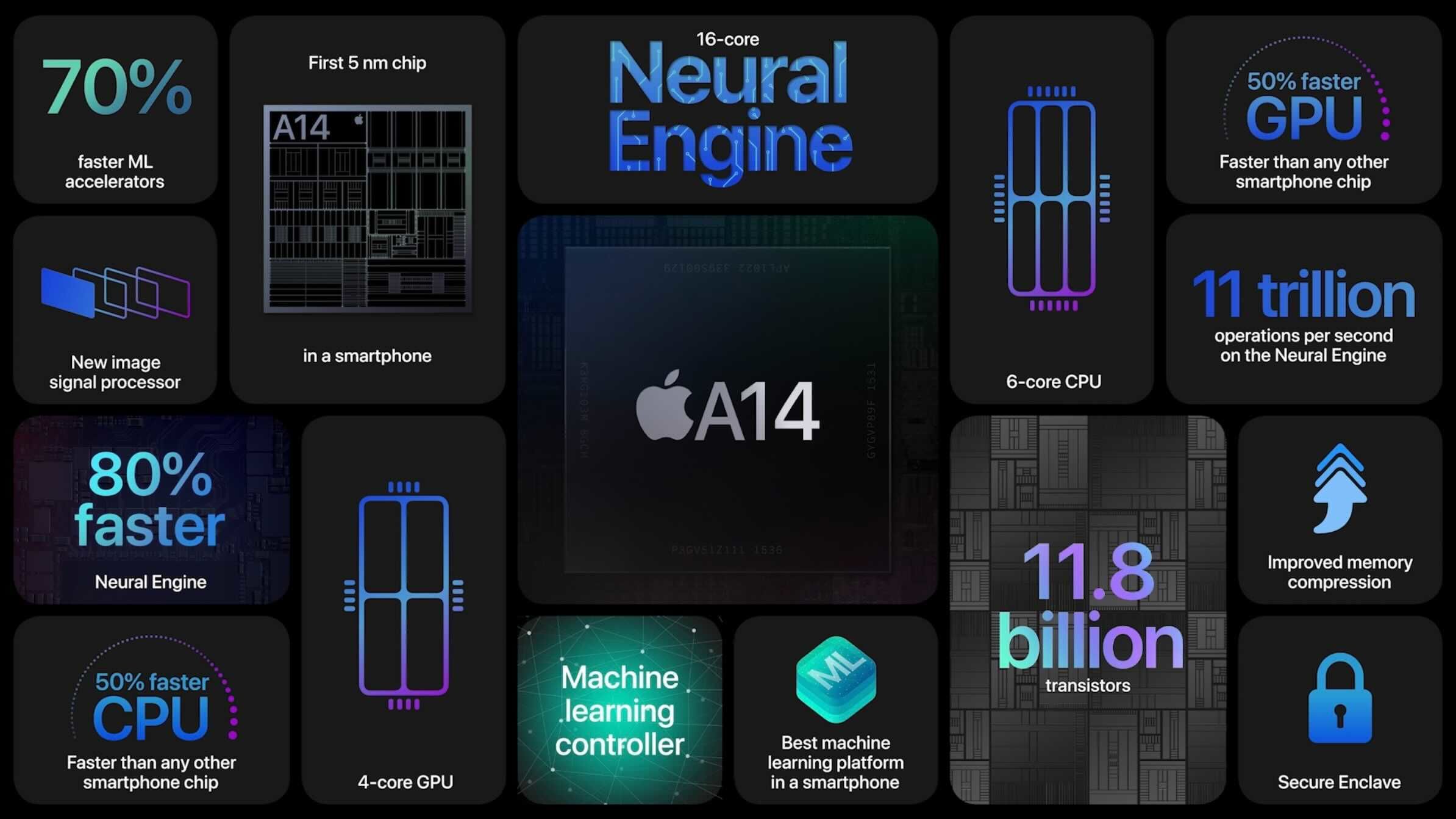 One of the highlights for many will be 5G, with the entire iPhone 12 range offering 5G with mmWave support in the US. Crucially, Apple claims that the iPhone 12 can utilise more 5G bands than any other smartphone at the moment, working with over 100 carriers around the world to make sure the 5G connectivity works as well as possible for as many people as possible.

What’s super-fast 5G without a super-fast CPU to go with it? Apple’s A14 Bionic chipset, first revealed as part of the iPad Air last month, is set to come to the iPhone 12 range. It’s the first mobile chipset to run on the 5nm manufacturing process, offering great boosts not only to performance but power efficiency too. Apple claims a 40% overall improvement compared to last year’s already-impressive A13 Bionic. It goes a step further, claiming that the 6-core CPU and 4-core GPU are 50% faster than competing chipsets, but without naming specific chipsets or smartphones. Apple is above all that now – apparently, anyway.

There’s also improvements to the dual-camera system on the iPhone 12 and 12 Mini. On the rear you’ll find a new main 12Mp wide camera with an improved f/1.6 aperture alongside the same 12Mp ultra-wide with f/2.4 aperture as last year’s iPhone 11. The main snapper features a new 7-element lens for a 27% improvement to Night More performance, and Apple has expanded Night Mode capabilities to all cameras this time around– including the selfie camera – and even introduced a new Night Mode Time Lapse video mode. 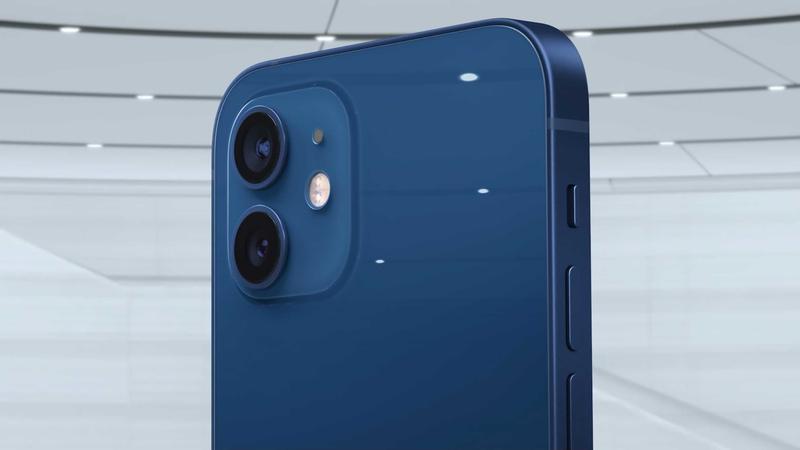 One of the cooler additions to the iPhone 12 has to be MagSafe for iPhone, 15W wireless charging with built-in magnets. One of the most beloved features of older MacBooks, MagSafe for iPhone allows users not only to snap an Apple Watch-style charger onto the rear of the smartphone, but it opens up a whole raft of new accessories too.

Apple is working on a bunch, including a small wallet, cases that snap into place and new wireless chargers, but third-party manufacturers like Belkin are hard at work creating accessories too. Without the need to stick a magnet to the back of your iPhone or switch cases to use different accessories, no doubt the iPhone 12 will be a versatile bit of kit.

We round up the best MagSafe for iPhone accessories separately for those interested. 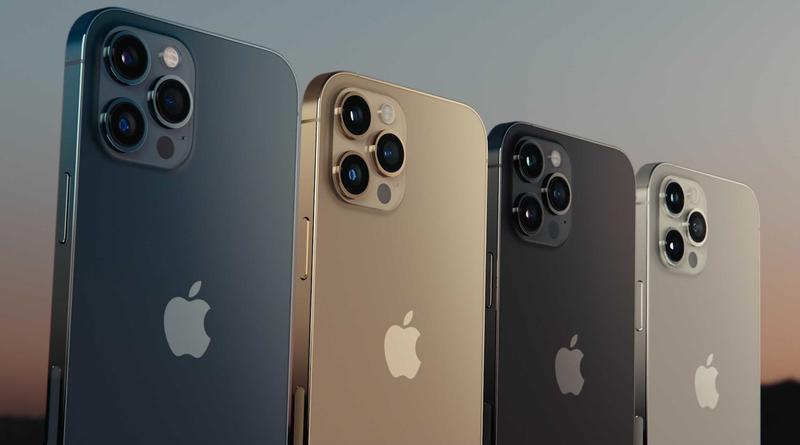 Unlike last year, the iPhone 12 Pro and iPhone 12 Pro Max are slightly different this time around. Let’s get the similarities out of the way before we delve into what makes them different.

Both feature the same design as the rest of the iPhone 12 range, but with a high-end surgical-grade stainless steel band with a mirror-like finish. There’s also a new Pacific Blue colour option to go alongside the standard Silver, Graphite and Gold options, with the latter being brighter and more eye-catching than previous Gold iPhones thanks to a new manufacturing process.

Thanks to the improved design, Apple has increased the display size of both the iPhone 12 Pro and 12 Pro Max, going from 5.8in to 6.1in and 6.5in to 6.7in respectively without a noticeable change in overall dimensions, and it utilises the same Super Retina XDR display as the rest of the iPhone 12 range, albeit with an improved 2778 x 1284 resolution and 458ppi pixel density. 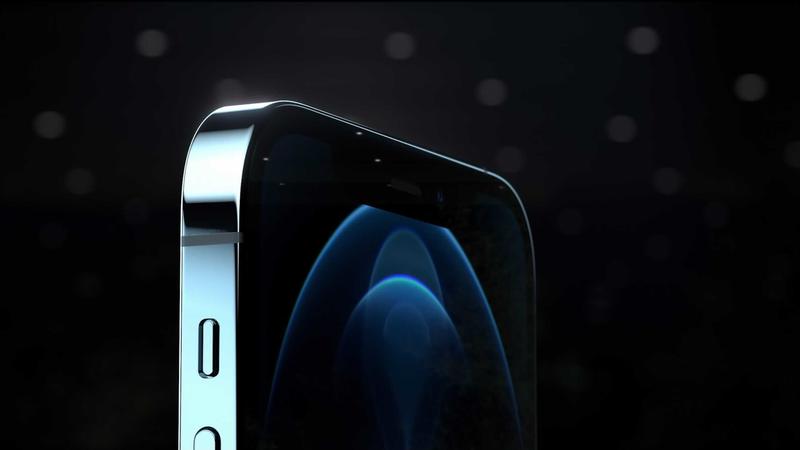 It seems that the iPhone 12 Pro and Pro Max can take advantage of the improved performance of the A14 Bionic to offer Deep Fusion support, enhancing images on a pixel-by-pixel basis, across all 4 cameras of the iPhone 12 Pro range, including the front-facing camera.

Speaking of cameras, it’s one area where even the iPhone 12 Pro and 12 Pro Max differ. The standard iPhone 12 Pro features a new 12Mp main sensor with improved f/1.6 aperture for 27% more light alongside a 12Mp ultrawide lens and 12Mp telephoto lens. That’s great, but it’s arguably similar to the iPhone 11 Pro. 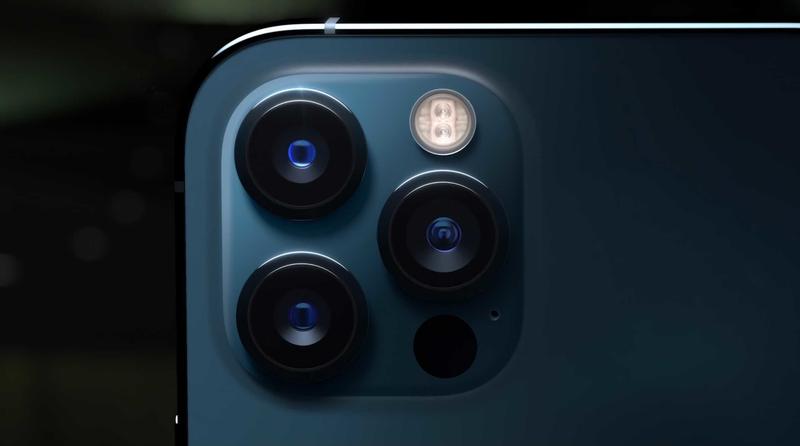 It sports a 47% larger sensor than its predecessor, and it features 1.7micron pixels for an 87% improvement to low-light performance. The new OIS (optical image stabilisation) uses a DSLR-esque approach called Sensor Shifting, moving the camera sensor instead of the lens to bring noticeable improvements to image stabilisation, both high- and low-frequency, across all rear-facing lenses of the iPhone 12 Pro Max.

There’s also a new LiDAR scanner on the rear of the 12 Pro range, offering improved autofocus capabilities when recording video and taking photos, alongside more accurate measurements in the Measure app and better placement of AR objects in AR apps. We explain what LiDAR is and what it does on the iPhone separately for those interested.

It can also record in 10-bit HDR with Dolby Vision support, both at 4K and 60fps, and Dolby Vision-specific edits can be made via the Photos app. There’s also Apple ProRAW coming later this year, combining the flexibility of the RAW image file format with Apple’s computational photography to capture incredible images fully editable via the Photos app on the iPhone. That’s coming to both models of iPhone 12 Pro though – not just the Pro Max variant.

Whichever iPhone you opt for, it’s clear that the iPhone 12 is going to be hugely popular. And if you’re prepared to wait another year, here’s what the rumours are saying about the iPhone 13.