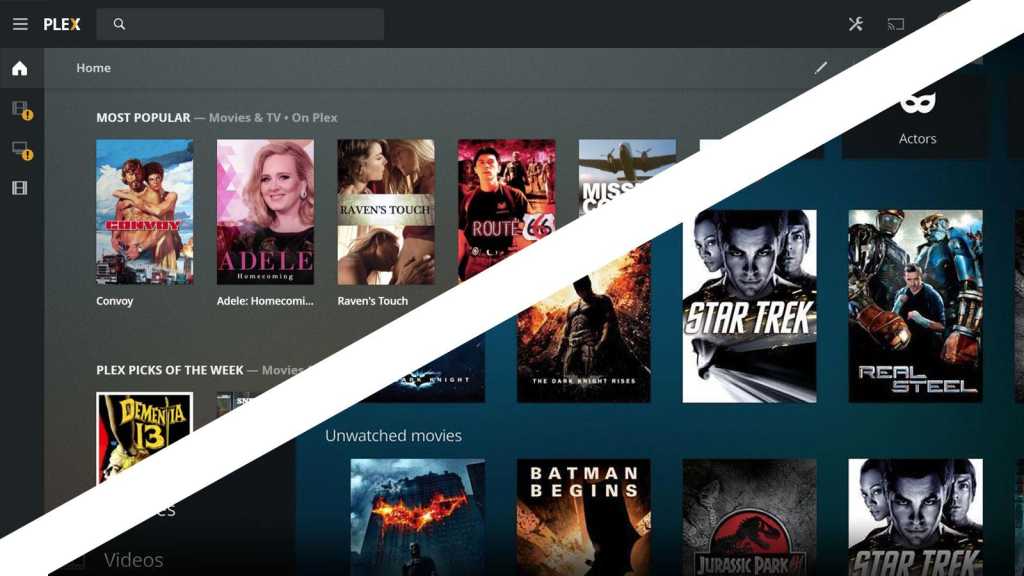 When it comes to media streamers, you have two options to choose from: Plex and Kodi. While both offer the same core functionality, allowing you to access your local library of movies and TV shows instead of streaming them online, the two media players operate in very different ways.

Plex looks to offer something akin to the Netflix experience, using built-in smarts to scrape the net to provide thumbnails and other content related to your movie library, while Kodi offers a much more customisable experience via a suite of add-ons, but which is best for you needs?

We break down the main pros and cons of Plex and Kodi right here.

In its simplest form, Plex Media Server is a digital media player that allows you to access not only movies and TV shows you’ve got stored on a NAS drive on your local network, but photos and other media files too. You can then access Plex on a variety of different platforms and watch the content you own without worrying about transferring and transcoding content to make it compatible.

While that’s impressive enough, Plex allows you to access your content both when you’re connected to your home network and when you’re out and about via cellular connection – if you’ve got it set up properly, anyway.

Plex wants to be the Neflix for your local streaming library, and to help it solidify that comparison with the streaming giant, the service uses file metadata to automatically search the internet and add thumbnails, subtitles, summary descriptions and other useful information to your file listings, making it easier to browse and more user-friendly too. Pair that with a clean, user-friendly UI and you’ve got a great option for media-hungry users.

A relatively new feature actually provides legal content for you to stream, completely free of charge. Admittedly there are unskippable adverts sprinkled throughout the library of content, but the key takeaway is that you can access the entire library free of charge. It’s not just a collection of random content either – there are some great titles on there, especially in the documentary section.

There’s also additional functionality available via Plex, but you’ll have to fork out for Plex Pass to access it. If you do decide to drop £3.99 a month to subscribe to the premium service, you’ll gain access to advanced features like offline playback on smartphones, access to parental controls, the ability to automatically back up photos and videos from your phone and add related content like trailers, behind-the-scenes and deleted scenes to movies in your library.

So, how does Kodi compare? Like Plex, Kodi is a free-to-use digital media player that provides instant access to your library of locally stored movies and TV shows.

Unlike the privately-developed Plex, Kodi prides itself on being an open-source project with contributors from around the world and a very active online community. What this means is there are constant updates that improve existing functionality, add new features and even redesign the entire interface – it has happened once or twice in the past.

The open-source nature of the media player means that it offers much of the functionality of Plex and other media players, but you’ll have to dig around in the Settings menu to find and set them up. That’s true of basic features like adding media sources and more advanced functionality like remote access.

It’s certainly not as user-friendly as Plex, and we think Kodi is aimed more at intermediate and advanced media player users. The sheer number of Kodi-related how-tos online suggest how complicated it can be to undertake fairly basic tasks using the software.

So, with a complicated UI and more work to set up the various features on offer, why do people flock to Kodi in the thousands? While we don’t condone it, it’d be remiss of us to ignore the fact that one of the biggest reasons consumers use Kodi is to install less-than-reputable apps that allow you to stream the latest movies and TV shows illegally, directly to your device without the need to download any files or pay a monthly subscription.

When it comes to media players, availability is just as important as the features and user experience on offer. What’s the point in a media player if you can’t access it on most of the devices in your home?

The good news is that Plex is available on almost every platform imaginable, from Android and iOS to more niche operating systems like Apple’s tvOS and Roku OS, and it’s even available as a Kodi add-on – meta, I know.

So, what about Kodi? It’s safe to say that the open-source media player can’t quite compete with Plex in the platform department, offering a shorter list than the competition, and in certain cases, you’ll have to follow a complex workaround to get the app on your desired platform. Kodi is available for iOS, for example, but requires xCode and a Mac to do so.

It’s safe to say that the difficulty of installation varies, with most platform app stores not offering the ability to download Kodi natively, and even with supported platforms, chances are you’ll have to download the installer via the Kodi website.

In fact, only Google Play offers the ability to natively install and update Kodi at the time of writing.

It really comes down to preference as both have similar functionality – it’s just presented in a very different way. If you’re looking for a no-stress media player that looks and performs much like Netflix, Plex is the way forward. But if you’re an enthusiast-level consumer looking to tailor your media player experience, the customisation available on Kodi via the library of add-ons is unmatched – just expect to look up a tutorial or two during the setup process.

For more, take a look at our selection of the best media streamers available right now.