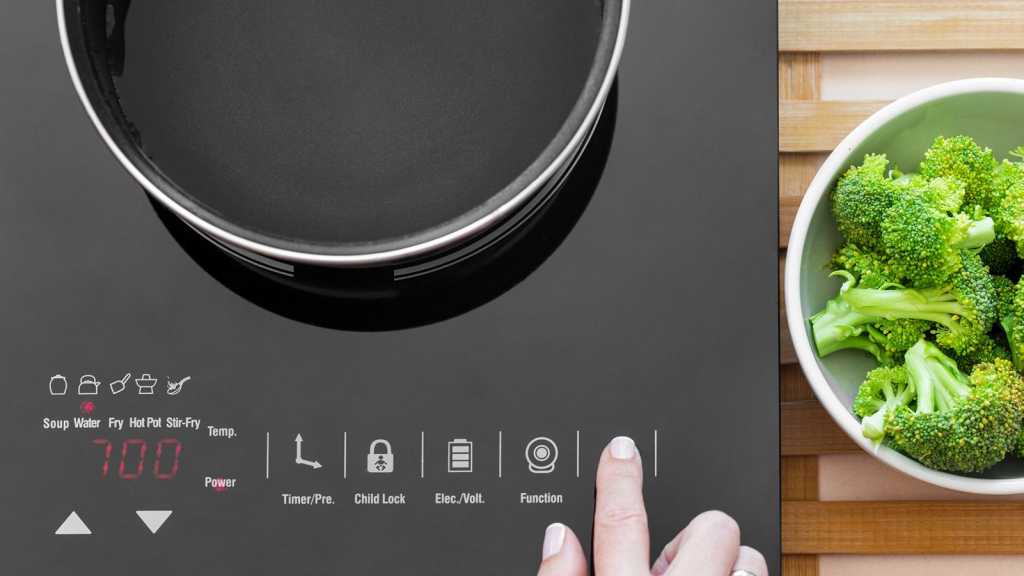 California is considering banning new natural gas stoves over their environmental effects and the potentially hazardous nature of their particulate emissions. Although this won’t affect existing appliances, the news has reignited a debate about the best way to cook. While traditional electric hobs tend to be slow and not very energy efficient, there is an excellent electric alternative: the induction hob.

But is it right for you? If you’re considering switching to an induction hob, you’ll need to adjust some cooking habits. We explain what’s what, as well as cluing you in to the accessories and oddities that come with this type of hob.

While you can move from electric to gas hobs – and back – with only minor adjustments, an induction hob will change what you cook with and how you cook. Here’s why.

How do induction hobs work?

An induction hob heats a pot or pan by electrical induction, rather than traditional methods such as radiant heat (like an electric hob) or a gas flame.

Radiant cooking involves the transfer of heat, in waves, from the heating elements under the cooker’s smooth ceramic surface to your pot or pan. The heat is generated by electricity.

Induction cooking is a more complicated process, involving the creation of a magnetic field. Underneath the glass of an induction hob is a coil of copper wire. When a pot that can conduct electricity (we’ll come back to this) is placed on the hob, an alternating electric current passes through it.

The resulting magnetic field creates an electrical current in the pot’s base, which creates heat. What this means is that the pan itself becomes the heat source, which is why induction cooking is so efficient.

The advantages of an induction hob

There are some solid reasons to invest in an induction hob. These are the key ones.

Induction hobs cook quickly, because all of the energy generated goes straight into your pan, which will heat up fast. Tests show that an induction hob can bring a pot of water to the boil roughly twice as quickly as a gas hob. Induction takes only 4 minutes, while a gas hob will take 8 minutes.

When you compare this to the time it takes a full kettle to boil (approximately 2-3 minutes), you can see why an induction hob is considered to be so efficient.

You’ll find that the heat output can be adjusted much more precisely than on a gas burner. As they are generally pricier than traditional hobs – and newer – induction hobs are likely to have other high-end functions, including an increased number of power levels, memory and timer functions.

A pan on an induction hob will maintain its heat, rather than getting hotter and hotter the longer it’s left, meaning you can judge more easily the cooking time of the food within – that is, once you’ve become used to it.

Saving energy means saving money and making the most environmentally-friendly choice. With a gas burner or an electric hob, you are paying to heat up the air around the pan as well. An induction hob only heats the pan itself.

However, the savings you’ll make on electricity will still take a long time to add up to the cost of a new induction hob. However, if you’re in the US, you may be able to get funding for the purchase under the Inflation Reduction Act.

An induction hob will not diffuse heat into the air around your pan, which makes it your best hob-cooking option for keeping your kitchen cool. Induction hobs come into their own when you’re going to be in the kitchen for hours, cooking a complicated meal, or during roasting summer days (when you want to cook food, but not yourself).

An induction hob minimises the risk of burns and fire. The only time there’s a danger of a burn from an induction hob is when you have just removed the pan. That’s because the hot surface of the pan base has been in contact with the glass hob – not because the hob itself is producing any heat.

Not only will an induction hob protect your fingers but you will never again set fire to your oven gloves when you casually fling them atop the cooker after serving food (or am I the only one with that bad habit?). You can test this out by placing an ice cube on the induction ring, next to a pan of boiling water. It will only melt – eventually – from proximity to the pan.

Food is much less likely to be baked onto the hob’s surface, so it’s easier to wipe away. As a bonus, you don’t have to wait long for the surface to cool.

While gas is cleaner than coal, it’s still bad for the environment. The US is not alone in considering a ban. In 2018, the Dutch Government introduced regulations to prevent new homes from connecting to the gas grid. This is part of an attempt to wean society from its reliance on fossil fuels.

As the UK is committed to reducing greenhouse gas emissions for 80% by 2050, it may well follow suit. The Committee on Climate Change in the UK recommended that no new homes are connected to the gas grid by 2025.

However, gas is unlikely to be phased out anytime soon. What this attitudinal change means is that in the years to come, companies will be focusing less on gas technology as they develop new products, so the most innovative items are likely to be induction.

Gas cooking appliances can contribute to low-quality indoor air. This is particularly true if you regularly forget to turn on your cooker hood or if your extractor fan is ineffective or gummed up with cooking oil. Gas burners emit carbon monoxide, carbon dioxide, nitrogen dioxide and particulate matter – which can not only irritate your nose and throat but have more serious, long-term consequences.

A 2018 study conducted by Stanford Medicine into indoor air quality found air quality issues from cooking in half of the homes the team visited. Some of these were bad enough to have violated health standards for outdoor air.

While using a good quality extractor fan will negate most of these issues, and although you can still burn your dinner on an induction hob – which will affect the air quality in your home – the association of induction hobs with clean air is likely to be a selling point to health-conscious buyers.

The disadvantages of an induction hob

However, it’s not all gravy (lovingly prepared in an induction hob-friendly pan). There are some disadvantages to consider. The most important of these – which we don’t think is discussed often enough – is their risk to wearers of pacemakers and insulin pumps.

People with a pacemaker or insulin pump should take note. Induction hobs are not recommended for people who wear these devices as an induction hob generates an electromagnetic field that can interfere with them.

While the British Heart Foundation suggests that wearers of pacemakers and similar devices should be able to use an induction hob if they remain 60cm (2ft) away from it at all times, it’s not likely that induction cooking will be a relaxing activity for anyone involved.

Induction hobs have a glass surface, with all of the disadvantages that entails. You are advised not to drag cookware across its surface, in case you scratch it.

Induction hobs have also been known to crack if something heavy – like a cast-iron pan – is dropped on them. Additionally, if a hot lid is placed on the surface while the heating area is still warm, air can become trapped between the two and when you remove the lid, the glass surface will crack.

Melted plastic or sugar can damage the surface permanently and hot pans can temporarily discolour the glass. This kind of stain will fade over time, especially when treated with hob cleaner, but while it’s there, it’ll mar the look of the appliance.

Your kitchen may need rewiring

If you’re in the UK at least, an induction hob may need more power than a regular 13 amp socket can provide. This means a separate wire from your fuse box to your cooker to provide (up to) the 4KW of power it needs. If you currently have an electric cooker, you may already be set up to do this but if you’re moving from gas, you’ll probably need an electrician to rewire your kitchen.

You’ll have to learn to cook all over again

An induction hob has limitations. For example, you can’t char food the way you can over a gas flame. Pans must also be perfectly flat, so wok cooking on the hob is harder as well.

But it will also affect your cooking techniques. In the world of induction cooking, your experience means nothing. Boiling times will drop and pans will bubble over. The oil you heat while you’re chopping onions will start smoking before you’re finished. Your favourite recipe, which you’ve cooked hundreds of times, will end up a charred wasteland in the bottom of a pan.

You may need to invest in new pans

As well as the expense of the new hob itself, you may well need to invest in a new range of cookware. Only pans with magnetic properties that can conduct electricity will work on an induction hob.

For more information on this, have a look at our article on which pans you can use on an induction hob.

What is that humming sound?

If you’ve never had an induction hob, you may find that it’s noisier than you expected. Pans on the hob can increase the buzzing or humming sound, which some people find irritating. A top tip is to use heavier pans, which can dampen the buzz.

Don’t get too comfortable

You will also get an unpleasant surprise and a burnt hand if you’ve been lulled into a false sense of security by leaving your oven gloves or a dishcloth on the hob while it’s switched on and instead leave a conductive piece of cookware or a utensil in its place.

What does an induction hob cost?

Induction hobs are the most expensive choice of the big three types, although they have come down in price and, if you shop around, you can now buy one without shelling out a huge amount of money.

If you’re in the US, Best Buy has a wide range of induction hobs, as does Home Depot.

If you’re in the UK, there are good options at a number of price points. John Lewis has a good selection, as does Appliances Direct.

We’ve spotted one particularly great deal in the UK. Amazon is selling the Russell Hobbs RH601H401B with touch control for £209 at the time of writing. There’s also free delivery on this item. It has nine power levels and four cooking zones. It comes with a two-year guarantee.

Before you buy – especially if you are interested in a high-spec hob – you should consult an electrician to ensure that your kitchen is set up to receive an induction hob. This won’t be a problem if you are getting a new kitchen installed but if you are simply switching from gas to induction, your home may well need rewiring.

After more appliances advice? Read on: