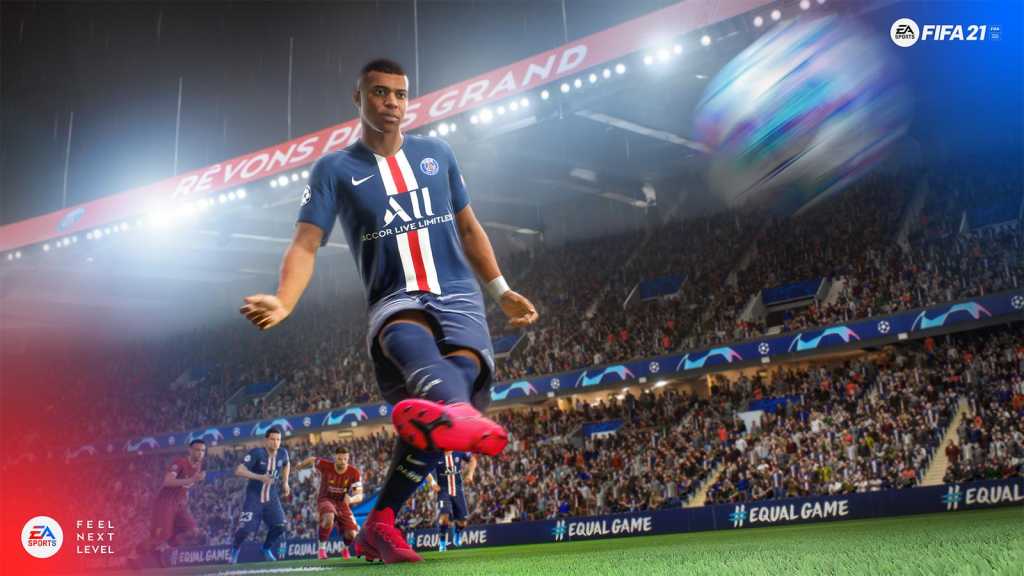 FIFA 21 is out everywhere now. As with many late 2020 console games, EA Sports released the game on current-gen consoles first (9 October in this case).

Then came the announcement that PS5 and Xbox Series X/S versions would arrive on 4 December, with a free upgrade to the next-gen version available if you’ve already bought the game.

Here’s everything you need to know, including all the details on upgrading and the new features you can expect on both versions.

FIFA 21 is available now on both current and next-gen consoles, as well as PC. The PS4, Xbox One and PC version was released on 9 October and you can buy it now on Amazon.

Then came the PS5 and Xbox Series X/S versions, complete with a number of additional features. They were released 4 December, with EA Sports offering a free upgrade if you’d already bought the game.

FIFA 21 is also expected to come to Google Stadia at some point in 2021.

With the game having now launched on all platforms, FIFA 21 is available on the following:

The game is also expected to be available on Google Stadia at some point in 2021. There are a few caveats to be aware of though. 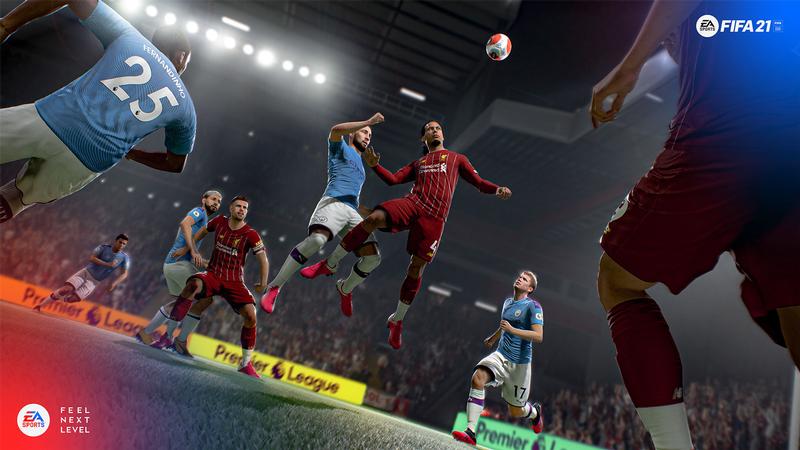 First up, the PC version of the game is the same as the PS4 and Xbox One versions, and not the upgraded next-gen console versions. That means PC players with high-end hardware won’t really be getting the most out of it. At least it’s available on Steam in addition to Origin, giving you more options on where to buy it.

The Switch port is again a Legacy version, with updated club kits and rosters for the current season, but an outdated set of features and gameplay modes.

With the PS5 and Xbox Series X going on sale in November, EA will release an upgraded version for the next-gen consoles on 4 December. Anyone who buys a PS4 or Xbox One copy of the game will be entitled to upgrade for free – more on that later.

EA Sports went trailer-crazy in the run-up to release, so there are five separate videos available to watch on YouTube. July’s Official Reveal Trailer didn’t show much with regards to gameplay, but we did get a look at the stunning graphics coming to the PS5 and Xbox Series X.

We also got some dedicated trailers for specific modes. First up, Ultimate Team (or FUT):

Career mode seems to be getting plenty of attention this year:

Back in June, our first look at the game came courtesy of a flashy joint teaser with Madden 21, showing off how both will look on next-gen consoles.

There’s even a new celebrations trailer with the likes of Cry Baby, Selfie and Erling Haaland’s “Peace” all being added.

How to upgrade FIFA 21 to next-gen consoles

EA has confirmed that anyone who has bought FIFA 21 for the PS4 or Xbox One will be entitled to upgrade to the next-gen version for free, in a scheme it calls Dual Entitlement, but it’s a little more complicated than that.

First up, you’re only eligible to upgrade the game up until the release of FIFA 22 – once that game is out, the free upgrades will stop working.

You can also only upgrade within each console line. So if you want the PS5 version, you have to buy it on PS4 first. And if you want it on Xbox Series X, then buy it for Xbox One first.

You can upgrade from either a digital or disc edition of the game, but there’s one big catch: you can’t upgrade from a disc version to a disc-less console like the PS5 Digital Edition. So if you think you might get next-gen hardware without a disc drive, it’s probably best to buy a digital copy of FIFA 21 just to be safe.

Any progress or purchases you make in FIFA Ultimate Team or Volta Football will be carried over to the next-gen console, but any progress within other modes like Online Seasons, Co-Op Seasons, Career Mode, and Pro Clubs is specific to the console, and won’t carry over.

To get your upgrade, you’ll first need to log in to your next-gen console using the same account that’s associated with FIFA 21 on your PS4 or Xbox One. Then, just head to the game library, where you should see the option to download the game.

In addition to the usual kits and squad updates, EA also revealed a host of new features that have been added to FIFA 21:

For years, there have been calls for significant improvements to career mode, something which many people feel has been neglected by EA in recent years. That will hopefully change on FIFA 21, with players able to ‘take their team to the top by managing every moment, with new innovations that create additional depth in matches, transfers, and training’.

EA has since expanded on what this will mean for gamers, with a whole host of improvements announced:

There’s also set to various other minor improvements, including broadcast improvements, more realistic retirements and an indicator of how strict negotiations might be.

The news was released alongside a dedicated trailer, which you can watch above or head straight to YouTube for yourself.

VOLTA was added to FIFA for the first time in 2019, offering a slice of the classic FIFA Street experience from within the main game. There’s a greater focus on multiplayer this year, with VOLTA SQUADS allowing four players to join forces as a street football squad.

This looks to be the street equivalent of Pro Clubs, so it’ll be interesting to see what it brings to the table. There’s a new story-based mode known as The Debut, while Volta Kick-Off will allow you to choose the settings for a one-off offline game.

They add to a star-studded existing lineup, which included boxer Anthony Joshua alongside legendary players such as Eric Cantona and Thierry Henry. It’s not clear whether the latter two or new addition David Beckham will also become ICON cards in Ultimate Team.

Rarely does a year go by without significant improvements to Ultimate Team, and this is no different for FIFA 21.

Again reflecting EA’s emphasis on multiplayer gaming, FUT Co-op will let you team up with friends and compete for rewards across multiple modes. Ultimate Team was previously very much a single-player mode, so it’s a welcome introduction.

This is always an area of focus for EA, but there appears to be a special focus on it this year. Among the improvements are a new agile dribbling system, control over off the ball runs and a ‘reimagined player collision and movement system’.

Interestingly, it looks the PS5 will have exclusives in this area via its DualSense controller. The new haptic feedback means that when you shoot, the corresponding part of the controller will rumble to make you feel more connected to the game. The adaptive triggers also mean you’ll feel the impacts of players losing stamina or fitness more keenly. See more details in the official PlayStation blog, or check out the video below:

As the Xbox Series X/S has controller more in keeping with current-gen, it doesn’t support these feature. How much of an impact they’ll have when playing the game remains to be seen.

How could we leave this one out? Cantona has been one of the most requested ICON players in recent years, and his heavy involvement in the Official Reveal trailer all but confirmed his inclusion. At 90 rated, he’s one of the best players in the game.

Oh, and Kylian Mbappé is the FIFA 21 cover star, if that wasn’t obvious from the same trailer. At 21, the World Cup winner and multiple Ligue 1 champion is one of the youngest players to grace the cover of the game.

Celebrations are getting tweaked too. First up the shush, regarded by many as the most annoying of the bunch in online play, is out. So is Dele Alli’s ‘challenge’ celebration – this isn’t seen as toxic, but the similarities to the OK symbol, now used extensively by white supremacists, might have something to do with it.

A few new celebrations are coming in to replace them though, including one that’s sure to be controversial: Kylian Mbappé’s cry baby. Check out the full selection of new celebrations in the trailer embedded above, or head straight to YouTube to watch.

In addition to removing the shush to speed up the time between goals, EA has made a few other changes to keep matches moving quicker.

The walk back cinematic after goals will be cut from online matches, and all celebrations will be quicker too. The game will also sometimes auto-skip animations when the ball goes out of play during online matches.

Time-wasting is also being cut down. Rather than giving players 30 seconds before set pieces, they’ll now have 10 seconds for kick-off; 12 for throw-ins; 15 for goal kicks, corners, and penalties; and 20 for free kicks.

Finally, two things that aren’t changing. Once again EA has decided not to include VAR in FIFA 21, explaining that since the game itself knows what’s a foul or not there’s not really any point.

The biggest impact of coronavirus won’t be felt either, as matches will still have full crowds in attendance, with not a face mask in sight.

Ahead of the release, EA Sports has revealed the top 100 ranked players that you can look forward to playing with in FIFA 21. You can see the top 10 below, but you can head to the FIFA 21 site to see the full top 100 ranking.

EA has also revealed the full list of clubs, leagues and stadiums that will be officially recognised in the game. Unfortunately, Juventus will continue to be known as “Piemonte Calcio” and have a generic stadium, while Barcelona’s Camp Nou is not making a return. 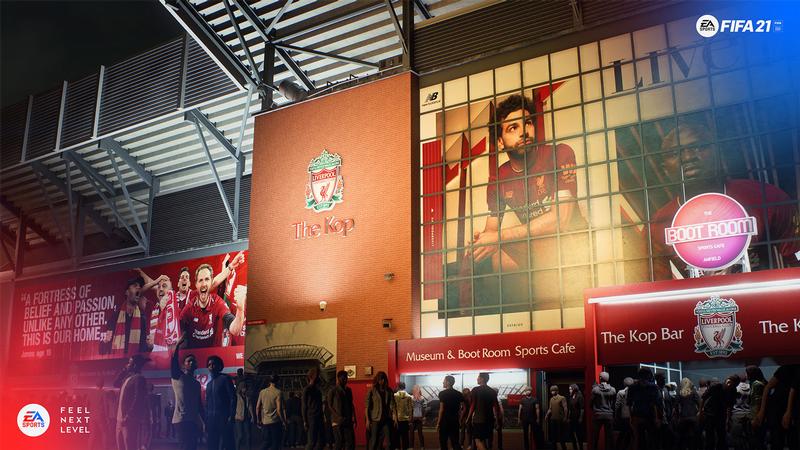 The five new arenas to be added to the game include Providence Park, the Benteler-Arena and Estadio Nuevo Los Cármenes. The late completion of the 2019-20 season means Elland Road is the only Premier League stadium not to be included, but EA has said it will share more news on the home of Leeds United at a later date.

Check out all the stadiums, leagues and teams that are coming to FIFA 21.

Ahead of the release, EA didn’t actually delve too much into FIFA 21’s actual gameplay We don’t even know what next-gen consoles will bring to the table beyond “blazing fast load times, deferred lighting and rendering, enhanced animation technology, off-ball humanisation, and more.”

A single tweet has given us a brief look at player likeness, but few concrete details have been revealed:

So, before anything about the new game was revealed, we made a list of things we want to see in FIFA 21. With the game now on sale, perhaps these could form the start of a FIFA 22 wish list:

With the first half of the official FIFA 21 launch now done, check out more of the best upcoming games while we wait for it to come to next-gen consoles.