Acer used CES 2020 to update its popular Swift 3 ultrabook with the latest chips from both Intel and AMD. Somewhat confusingly, the laptops it put those chips in aren’t the same though – despite both simply being called the Swift 3.

It’s a move destined to cause consumer confusion and buyer’s remorse, which is a shame because it distracts from the fact that these are otherwise decent looking laptops that pack in surprisingly powerful specs for the price.

It doesn’t help that not only do the two laptops boast different designs, they also have different pricing and release dates. Thanks Acer.

The Intel Swift 3 (or SF313-52/G to give it its catchier proper name) is out in Europe this month and North America in March, and will start from €699/$699 respectively. There’s a longer wait for the AMD version (SF314-42) but it comes with a lower starting price to reward the patient. That hits Europe in March and the US in May, with prices from €599/$599 – above what we’d normally consider a budget laptop, but not by much.

We’re not sure exactly what the base specs of each model will be, so it’s hard to assess how compelling that price really is – but unless Acer is really skimping on RAM or storage for the entry-level models those look like pretty strong value for what you’re gonna get. 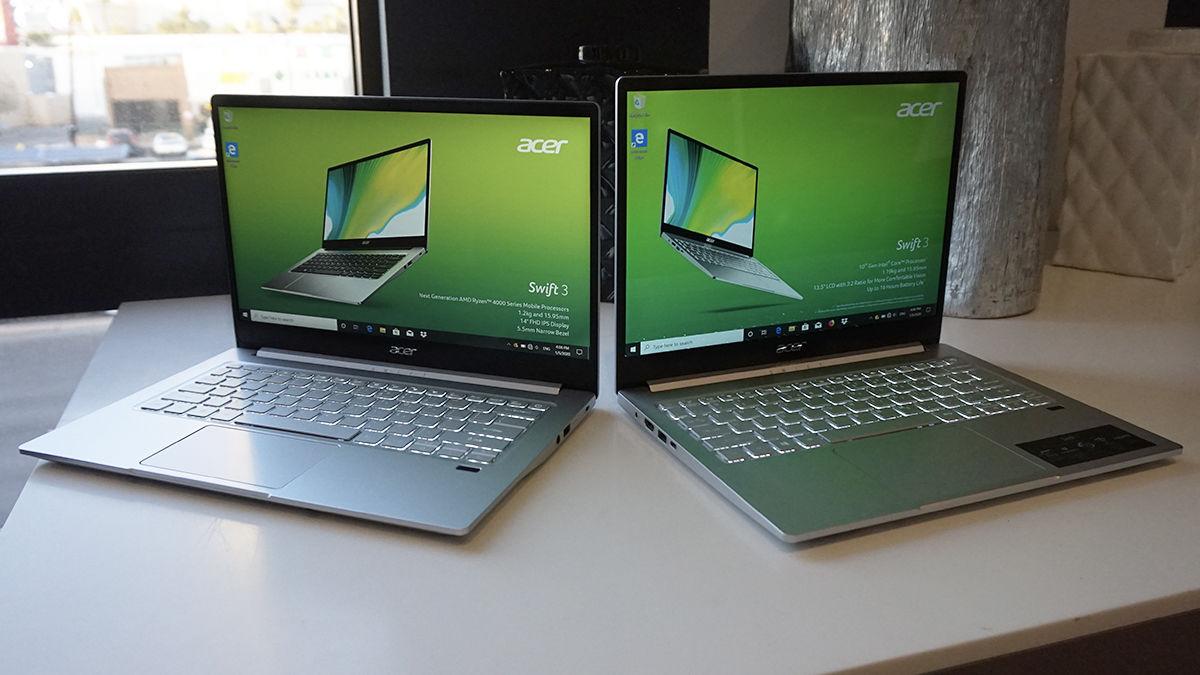 So here’s the rub: the two Swift 3 laptops are different sizes, with different displays, in different aspect ratios.

The AMD model is a pretty typical 14in laptop with a 16:9 IPS HD display that will immediately feel familiar. By contrast, the Intel version uses a smaller 13.5in panel that not only packs in 100% sRGB coverage, but also adopts a taller, squarer 3:2 aspect ratio and a higher resolution (2256×1504).

Of course you can’t change the display without affecting the rest of the chassis, so the Intel laptop is a stockier, squarer laptop in the whole – though it’s technically half a millimetre thinner than its AMD equivalent. Both weigh 1.2kg (2.6lbs) though, so it all balances out in the end.

Why the difference then? In short: blame AMD. The chip manufacturer is apparently keen to push its new 7nm Ryzen 4000 processors for entertainment rather than productivity, which is why Acer has opted for the widescreen display format – better suited to streaming TV or playing games. By contrast, Intel is happy for productivity to be a focus, which is what the boxier 3:2 format suits.

Beyond the screens the two laptops do look similar enough. They come in the same grey/silver finish with the same backlit keyboards – though the Intel model does get a larger trackpad that makes the most of its extra vertical space. 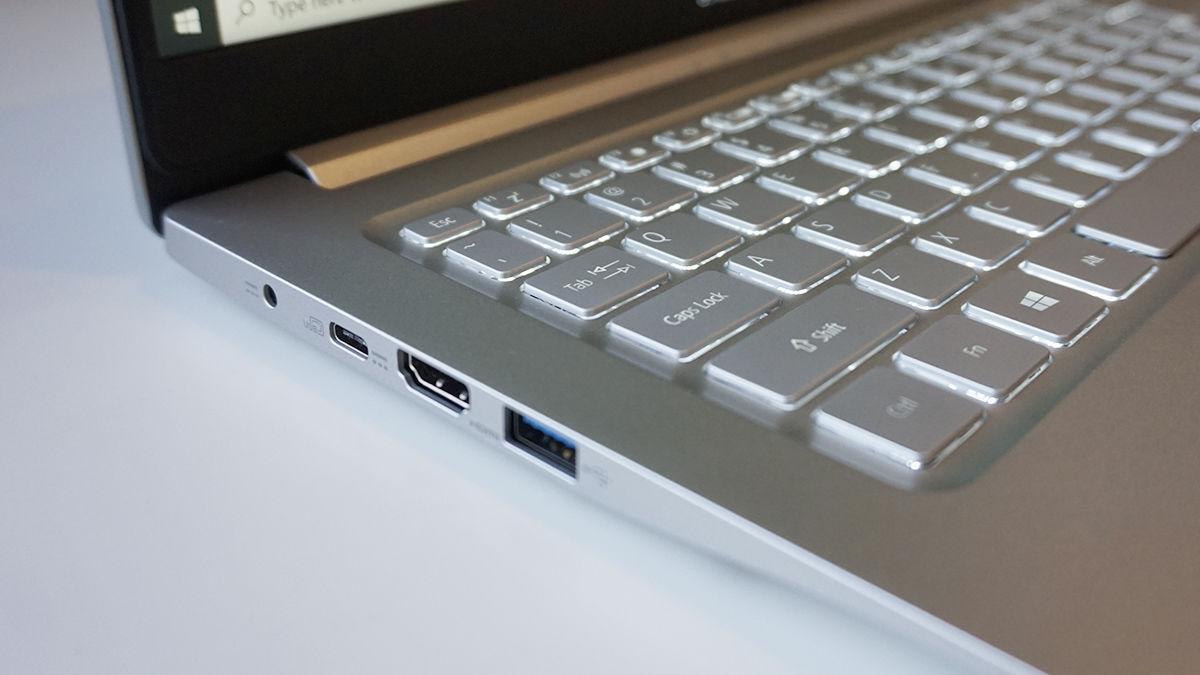 Both have a built-in fingerprint reader with Windows Hello support, the same (impressive) array of ports: USB-C with Thunderbolt 3 & DisplayPort, two USB-A, HDMI, headphone jack, and a lock slot.

To be blunt, neither is likely to win any design awards, and a splash of colour or texture wouldn’t go amiss here. But if you’re after a simple, clean design – or just care more about function than form – these look likely to get the job done.

The AMD model may seem more exciting thanks to packing the company’s brand-new Ryzen 4000 chips, which will hopefully finally see AMD catch up with Intel on mobile performance, but for our money it’s still the Intel model that impresses more on internals – mostly thanks to a longer lasting battery.

Acer claims that laptop can handle 16 hours of video playback before the power gives out – a number it tried to hit in order to meet Intel’s standards for Project Athena certification, a measure to recognise the latest and greatest ultrabooks in terms of weight, performance, and battery efficiency.

As for the AMD model, Acer is only promising 10 hours of performance – a pretty serious drop that could well be a deal breaker. AMD has struggled on power efficiency on mobile platforms in the past, and it looks like that’s one area it’s still lagging behind.

Both models come with the option of a discrete GPU (Nvidia or Radeon Vega respectively) along with up to 16GB of RAM, though on storage the AMD caps out at 512GB while Intel hits 1TB. Wi-Fi 6 is standard on either. 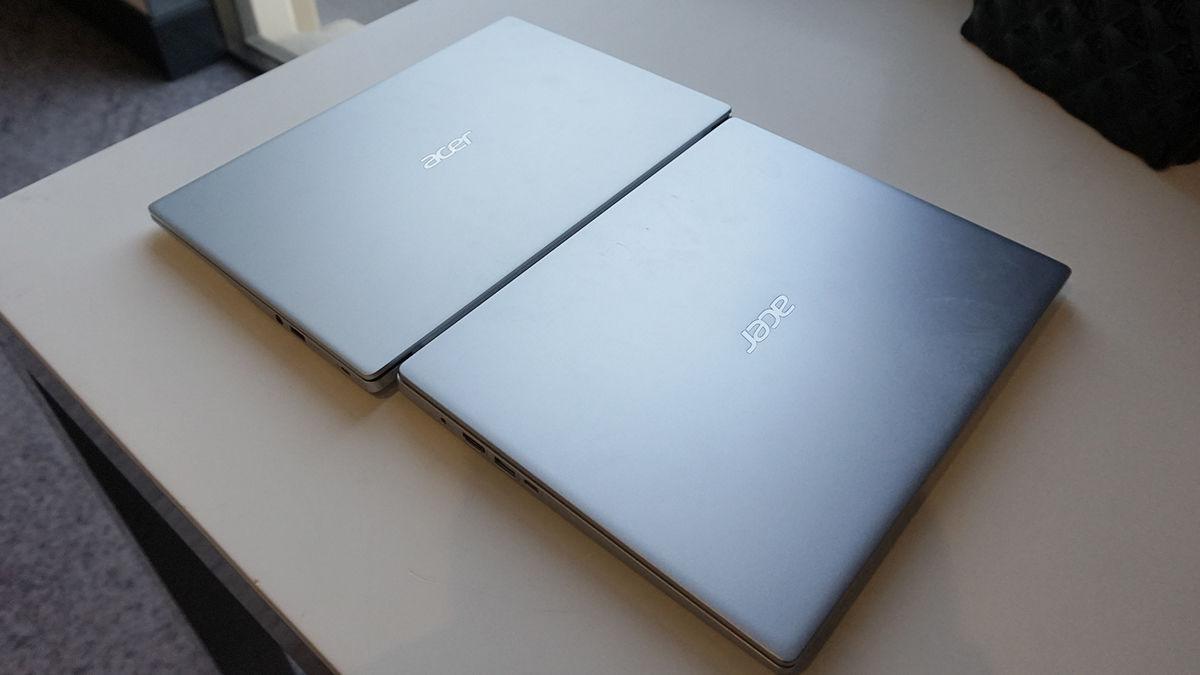 It’s hard to see what Acer gains from releasing two machines with so many spec and design differences under the exact same name, and the implication that AMD is to blame doesn’t look great for either company. Throw in the fact that the AMD model lags behind on resolution, storage, and battery life, and regardless of which aspect ratio you prefer, it’s clear that not all Swift 3s were created equal.