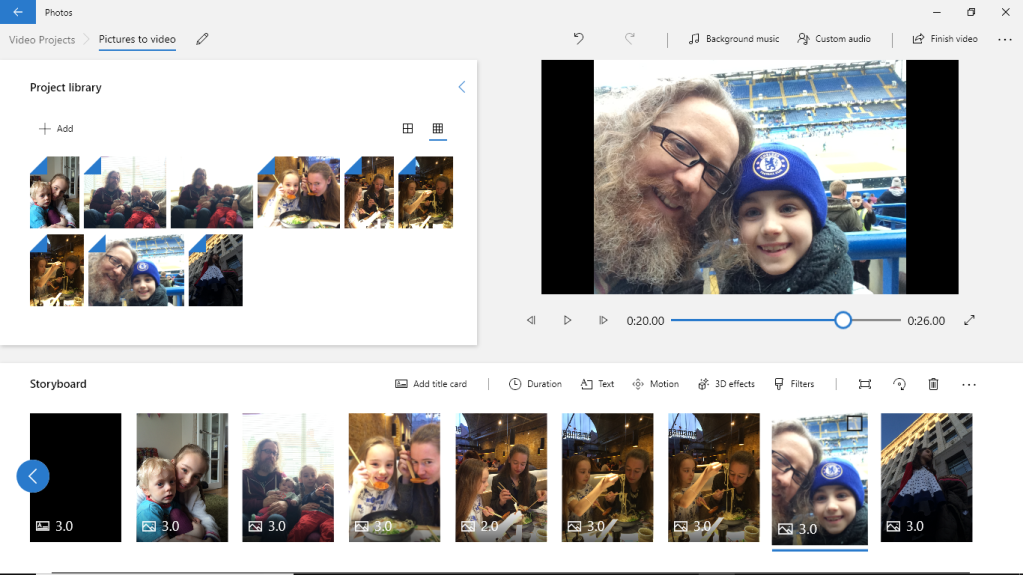 Thanks to the excellent camera quality on modern smartphones, many of us now have a huge collection of photos in our libraries. While sharing multiple images on social media is easy, an interesting alternative is to turn them into a video. And this is how to do it.

Before you being making a movie it’s best to put all of the photos you intend to use in one place. Normally they might be stored in your general photo library, but to speed things up we recommend creating a new folder on your desktop and then going through the library and copying the relevant ones to the folder.

Set up your video editor

Once you’ve decided on which editor you want to use (we went with the Microsoft Video Editor which comes with Windows 10 and works in the Photos app) download and install it on your PC/Mac. Next, launch it and create a new project.

Usually there will be a section in the upper left corner where all of your photos of videos are held. In Video Editor it’s called Project library, and most others will be something similar. At the moment it will be empty, so either use the add or import options to bring the ones stored in the newly created folder on your desktop. 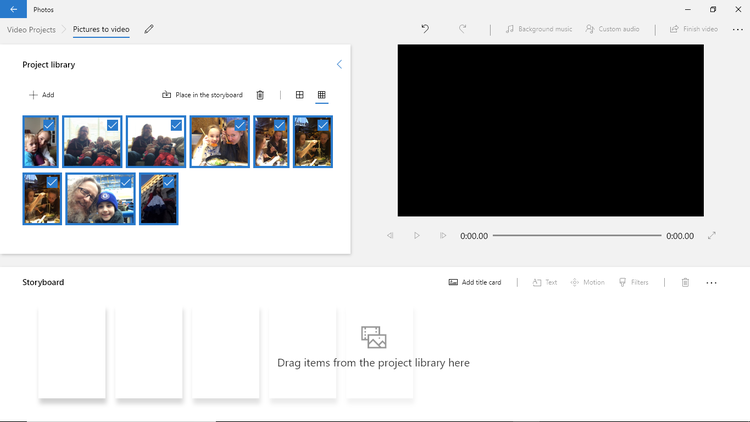 Assemble the images on your timeline

Video editors work with something called a timeline. This is the area at the bottom of the screen which is a thin strip. Images and video are dragged here and then appear in your movie. The idea is to drag them in the order you wish them to be seen, creating a sequence (or timeline) that will then be played. Sort of like a slideshow presentation.

When you’ve placed a few photos on the timeline, try watching them in the other panel (in the upper right area of the screen) by using the Play button underneath. This will give you an idea of how long each image stays on screen and how they look when changing from one to another.

If they are flashing by too fast, click on the image in the timeline and then click and hold the edge and drag it to the right so that the box increases in size. This will mean it stays on the screen longer. Some editors (such as the Video Editor) offers a different approach, in that you highlight the image and then click the Duration button and enter the amount of seconds required instead. 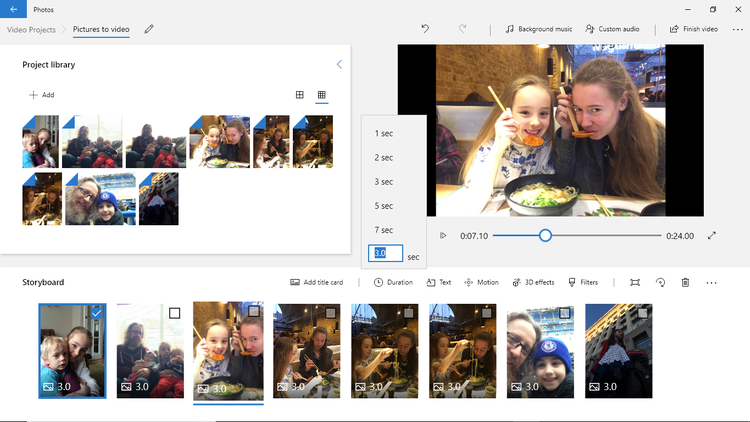 Once the photos are all in place and you’re happy with the flow of the video, it’s time to add a bit of sparkle. First up you’ll want titles. These can be as simple as a text message on a blank screen that appears at the beginning and declares ‘Holiday in Canada 2019’ or you could even introduce chapter markers at different points in the video to highlight particular groupings of photos.

Adding these is very easy. Just look for something that says Add Title or similar. This will then drop one in, usually to the left of the image you currently have highlighted on your timeline. If it appears in the wrong place, just drag it to the right one.

Depending on your editor, you’ll then need to select the title page then find the Text option to add your messages. On Video Editor this gives you a few simple fonts to liven up the words as well as options for where they are displayed on the screen. Experiment with the layout and style until you’re satisfied. These can always be changed later if inspiration strikes. 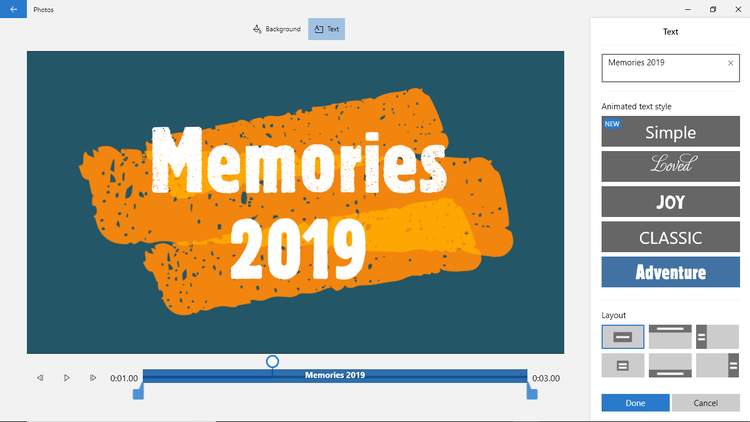 The next thing to do is add in some transitions. These are little animations the take place when changing from one image to another, just like you’d find on PowerPoint and other slideshow software. Now, some editors don’t offer this feature, as we discovered with Video Editor, but if yours does then it’s just a simple case of selecting the space between two images and adding the transition from the menu. There are a number of basic offerings, such as swiping the next image in from the right or dissolving the current image to reveal the next one underneath, but the rule of thumb is that the less elaborate ones make for a more polished end result.

Finally, you’ll want to add a bit of music to make the whole thing move along nicely. Some packages will include royalty free backing tunes that you can drop in, while there’s also the option to pull in a music file from your personal library if you prefer.

Video Editor offers both and they can be found by clicking on the Background music or Custom music options above the viewing pane. The nice part about using the included background music, at least on Video Editor, is that it automatically adjusts the length of the tune to match the video length. 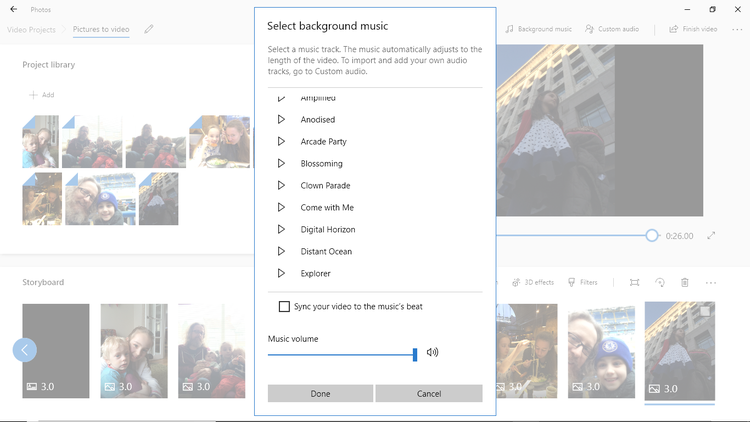 If you import custom audio then this will be placed on the timeline, underneath your images. You’ll probably need to do some editing on the timeline to fade out the audio at the end, but the package will include instruction on how this can be done. It’s usually a case of clicking on the audio track a few seconds before the end, which should make a marker appear. You then click right at the end, creating another marker. Then, click and hold the second one and drag it down, thus creating an automated volume decrease.

With the assembly and editing all done, all that remains is to hit the Finish or Export video option and be ready to share your creation with the world. Now you should have a cool video, replete with pictures from your library, titles, funky transitions, and a spot of musical accompaniment for people to enjoy as they watch.

If this has whetted your appetite for more creative endeavours then be sure to also read our best video editing software roundup for packages that come with all the bells and whistles.