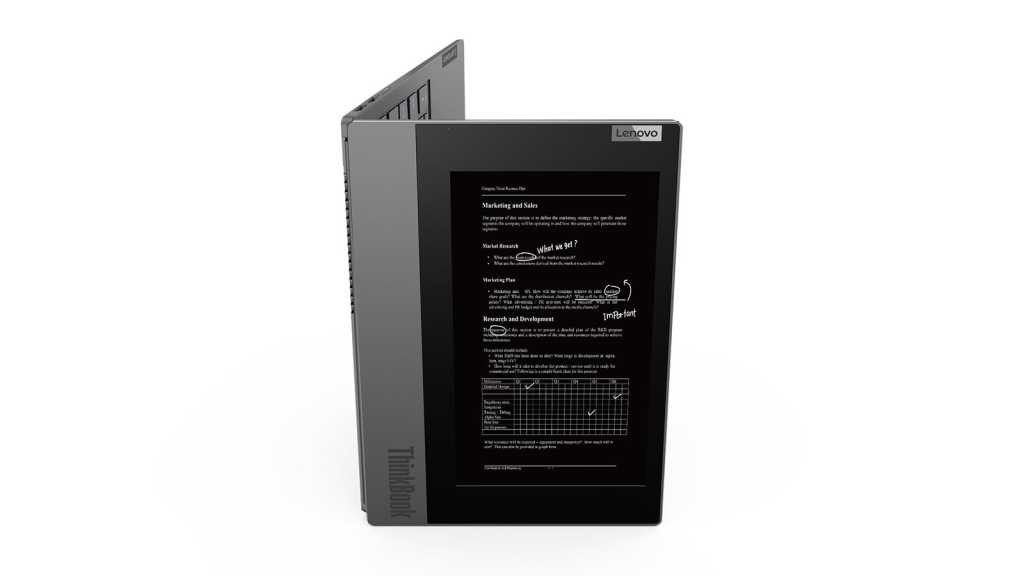 Lenovo has continued its busy CES 2020 by announcing the ThinkBook Plus, a laptop with an e-ink display on the outside of its lid. It’s designed to display information when the laptop is closed and can be written or drawn on with an included pen.

As with the rest of Lenovo’s Think line, the ThinkBook Plus is aimed at the business user but that doesn’t make its design any less weird. Lenovo says its aiming the product squarely at millennials and Gen Zers by giving them a device that lets them get all their tasks done more productively on one device, helping to cut down on procrastination.

We’re not sure a second screen with different input method is the answer, but it’s one that’s at least caught our attention.

The input for that e-ink screen is the integrated Lenovo Precision Pen, which Lenovo says is best to take notes, draw and… not much else. The screen will display email and calendar notifications but apart from discreetly doing so in meetings, you’re surely not going to be using it much.

You get staple features like Windows Hello authentication, a fingerprint sensor, full size USB ports and Alexa integrated but we’re not sure anyone needs an external display on their laptop, even if they do run a small to medium business.

For the specs though, Lenovo isn’t charging that much more for the privilege – the ThinkBook Plus starts at $1,199 USD and is available from March 2020.