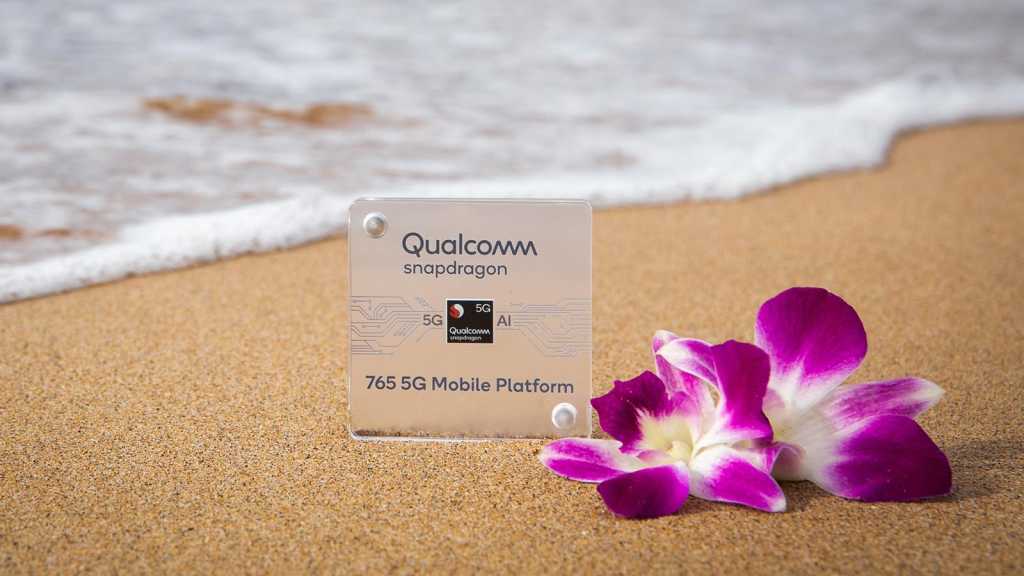 Qualcomm has introduced the Snapdragon 765 and 765G at its Snapdragon Summit in Hawaii. They are two mobile platforms less powerful than the 865, but just as interesting and important for the industry.

If you buy an Android smartphone next year, there’s a high chance it could have the Snapdragon 765 inside it.

Part of Qualcomm’s big, bold push into 5G, the 765 and 765G come with an integrated 5G modem meaning every phone with the new chips will be 5G ready. It’s notable that the company is launching two lower-powered chips alongside  the flagship 865 – a clear sign that it believes 5G is here and ready for retail, and phones below flagship level need the right support too.

The big news is the 765 has an integrated Snapdragon X52 Modem-RF System, giving the chip 5G capabilities. It’s not an optional extra and means any device with the 765 in it will technically be 5G compatible. They should also support all 4G bands too though, so you won’t be forced into paying for a 5G contract if you get a phone with the 765.

Importantly, the 765 supports all possible regions and frequency bands for 5G globally, meaning any country and mobile operator with 5G spectrum can be sure devices with the chip will work on their network.

The platform’s core runs on the Kryo 475 CPU that’s capable of speeds up to 2.3GHz, paired with the Adreno 620 that promises 20% graphics improvement over the last generation of 700 series chips.

Video rendering will be better than ever at this level, and hopefully will provide the better battery life that Qualcomm promises. Mid-range Android devices with Snapdragon 765 chips should be able to comfortably manage two days between charges if manufacturers incorporate the platform well.

Qualcomm Quick Charge AI will work with quick charge battery tech and aims to increase the number of battery life cycles by 200 days – that is a significantly longer life span for a phone before the battery won’t hold a charge.

Qualcomm says despite the chip not being its flagship, it will still be able to comfortably process 4K HDR video streams (hardware depending) and use its offline AI smarts to upscale standard definition video.

The best mobile photography capabilities are reserved for the Snapdragon 865, but the 765 platform boasts Intelligent Multi-Camera Capture, meaning the chip supports devices with telephoto, wide and ultra-wide sensors.

4K HDR video is also possible with the chip and can capture and process over a billion colours.

The G stands for gaming. The 765G has the same components as the 765 but adds 10% faster graphics rendering thanks to its enhanced GPU specs and is capable of 5.5 TOPS (trillion operations per second) of AI performance.

Qualcomm has added more Snapdragon Elite Gaming features to the 765G too, promising smoother gameplay over the regular 765 as well as true 10-bit HDR for an overall better 5G mobile gaming set up. The features are supposed to allow better gaming extensions and optimisations too.

If the 765G ends up in a wide range of phones, it might encourage mobile game developers to push the features of their games in the knowledge millions of compatible handsets will be able to take advantage of them.

Oppo has confirmed its Reno 3 Pro will be the first smartphone to market with the Snapdragon 765G. It launches in December 2019 but is a China-only handset for now.

Motorola followed suit and confirmed the same. It means the rollout of 5G-ready phones might be faster and more abrupt than was first expected after the slow introduction of high-end 5G handsets during 2018.

When will the first Snapdragon 765 and 765G phones come out?

Qualcomm says the first phones with the Snapdragon 765 and 765G will be launching in Q1 2020, in line with the promises of handset manufacturers. But as we noted above, the Oppo Reno 3 Pro will be first this month.