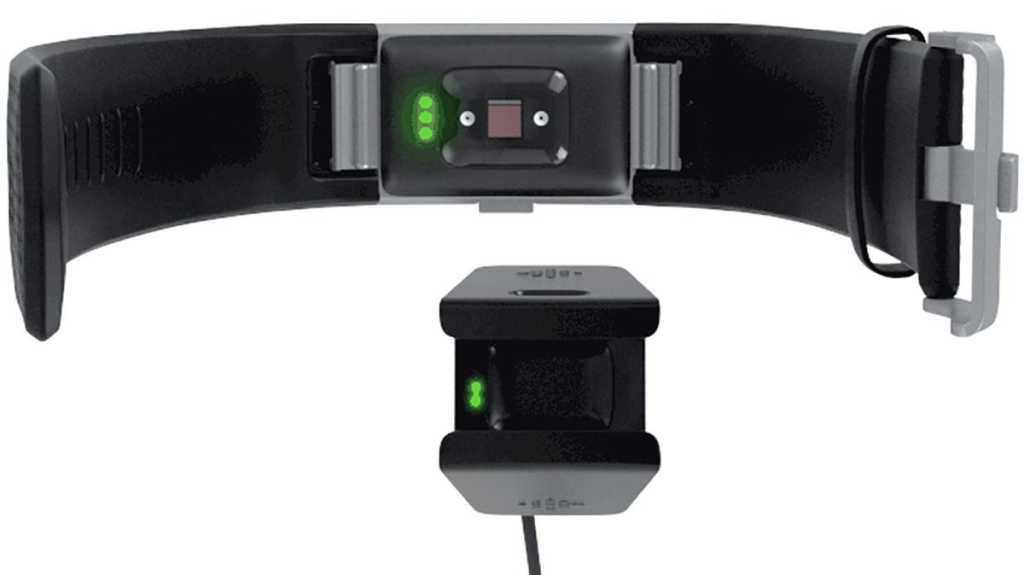 Fitbit’s trackers all have pretty decent battery lives, ranging from four to seven days between charges.

The latest Charge 4 and (now discontinued Alta HR) could keep running for up to seven days. The Versa 2 isn’t far behind at 6 days. The Ace 2, Ionic and Inspire series can usually clock up 5 days before needing a charge.

However, that relies on the human attached to the tracker to remember to take it off and charge it every now and again. (Apple Watch owners don’t get that flexibility – they have to recharge once a day!)

Fitbit is kind enough to send you an email telling you when your tracker’s battery is down to 25%. That should give you about a day to get it charged up again.

There’s nothing that will send a Fitbit user into despair more than the realisation that his or her trusty device is just about to lose all its tracking powers through a faded battery – especially if away from that all-important charging cable.

Fitbit includes just one charging cable in the box, but your tracker could give up the ghost at work or on a long journey, where you don’t have the ability or cable to recharge.

These battery-saving tips should work for all recent Fitbit trackers.

Tip #1: If you switch off All-Day Sync, you can save up to 24 hours of battery life. This stops your tracker delivering its data to the Fitbit servers, but you can still manually sync to keep up to date. Just opening the app usually forces a sync, or you can command a sync by wiping down in the Today screen on the app. The phone and the Fitbit use less battery power because they connect and sync ‘on-demand’ rather than periodically through the day.

Tip #2: That said, the more you manually sync, the more battery life gets used up. So try looking at the Fitbit app a little less when you need to conserve battery power.

Tip #3: If you turn off Quick View, you can also add up to another 24 hours, according to experts on the Fitbit Community forum.

Tip #4: On the Android app, there’s a feature called Always Connected, which can improve the Bluetooth connection between your phone and your Fitbit. Turn it off, and you may experience longer battery life as it seems to cause some drain on the tracker. 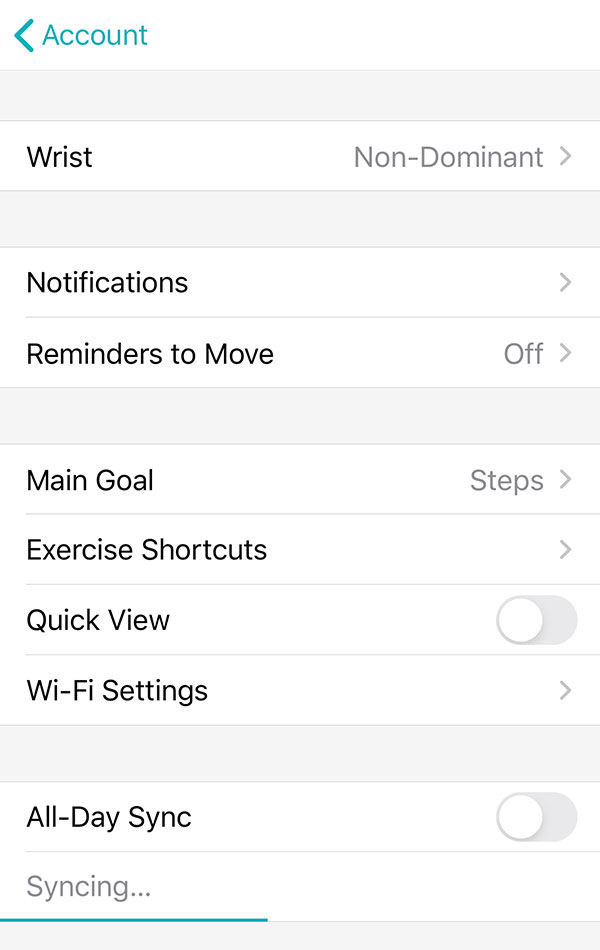 Tip #5: Turn off Notifications, as getting these and telling you that they’re there uses up some battery power. We love Notifications on our Fitbits, so this might be a tip only to keep your fading Fitbit going as you wait to get to a charger. Or check whether you need all the notifications you are receiving.

Tip #6: Turn off Reminders To Move. Again, this is a favourite feature but when you need to eke out that battery, turning this off should save you at least a few minutes of battery life. You can also customise the times this feature is set to. So if you know you won’t walk 250 steps between 6am and 7am, adjust the Settings via the app.

Tip #7: Don’t look at your Fitbit so often. Every time you raise your wrist to turn on the screen, your battery loses a little juice. If you are a regular charger this shouldn’t make much difference, but in emergencies we say, let it be.

Tip #8: Dim the screen on the Charge 3, Versa series or Ionic in the tracker’s Settings. Tap to change the Brightness setting.

Tip #9: Turn off Connected GPS or Phone GPS on those Fitbits with this feature (Blaze, Charge 2, 3 and 4, Versa series, Ionic). You turn this off on the Charge 3, Versa or Ionic via the Exercise option screen on the tracker. Blaze and Charge 2 owners need to do this via the mobile app. Inspire HR users should open the Settings app and check Phone GPS is On or Off.

Tip #10: The Inspire HR, Charge 4, Versa Lite, Versa 2, and Ionic feature a great heart-rate monitor, but remember that it continuously tracks your heart rate while you’re exercising and throughout the day – and that uses up battery life. Swipe to Settings on the tracker, and turn off the Heart Rate monitor. You’ll lose some important daily data and advanced sleep tracking, but you will keep that battery going a little longer.

Tip #11: Try to keep your Fitbit at a sensible temperature, as batteries generally don’t like very high or very low temperatures.

Tip #12: Set fewer alarms. Turning off alarms might make you late for work, but it will save you some battery life, and give you an extra half hour in bed!

Tip #13: The ultimate battery saver is to switch your Fitbit off. Wait, it makes sense. If you have just a few percentage points of battery juice left, but aren’t going to be moving much for the next couple of hours, then consider switching it off, and then turning it back on when you are up and about. Don’t worry, shutting down your device doesn’t delete any data. On the Versa and Ionic, for example, you go to your watch’s Settings, and shut it down via About.

Tip #14: Buy a spare charger. Fitbit sells spare charging cables on its online store, but you can also find much-cheaper third-party chargers on Amazon. Make sure you have one at home and one at the other place you mostly find yourself, such as at work. Fitbit warns users to “use only genuine Fitbit charging cables”, but then it would say that, right? It is correct that for safety’s sake using a genuine charger is the right thing to do, in case you buy some cheap charger that sets your house on fire. But we have quite happily used a spare third-party charger without incident.

Tip #15: Buy a new Fitbit. All batteries deteriorate over time, so become less efficient. If your Fitbit is over a couple of years old, then maybe it’s time to upgrade. Read our Best Fitbit roundup for details of the latest trackers and Fitbit smartwatches. They needn’t cost a fortune if you also look at our list of the most recent best Fitbit deals.

Fitbit’s main smartwatches are the Versa 2 and Ionic. These tips also work with the original Versa and the Versa Lite Edition, plus, of course, the Special Editions.

Tip #16: On the Versa and Ionic settings, you can set how long before the screen sleeps after it comes on via wrist motion or pushing the side button. By default, this is 10 seconds – just enough to tell the time and/or see how many steps you have taken so far that day.

If you need the screen on for longer – say, because your clock face makes seeing steps or other metrics quite difficult – you can set it to stay on for 15, 20, 45 or 60 seconds.

That’s great, but it will impact your battery life until the next charge, so check that it’s set to the default 10 seconds.

Tip #17: You can also customise the Always On Display setting, where the screen is – you guessed it – always on. Again, this will affect battery life. And by “effect” I mean shorten.

To get the most from your Fitbit’s battery, turn Always On off. Fitbit says that the Versa 2’s six-day battery life goes down to a mere two days with Always On!

Always On can use 5% of the battery per hour.

If you do need your screen always on – useful in some aspects of training and especially cycling, when you don’t want to be forever shaking your wrist and losing grip on the handlebars – you can customise with either a Digital or Analog clock face. We’re not sure if either one uses more battery time than the other.

You can also set times when you need the display always on, as it’s unlikely you’ll need this setting while asleep. You can also show the battery life status bar here, and which core stats display or not.

Tip #18: Reduce the times you use Music Control on the Fitbit.

Tip #19: Reduce your use of Fitbit Pay. This might also save you money. Just use your bank card, which doesn’t have a battery.

Tip #20: Think about changing your Fitbit smartwatch’s Clock Face. Some of the animated clocks will use a tiny bit more battery than the more static faces.

Tip #21: The Versa 2 features Amazon’s voice assistant Alexa. Turn off the microphone in its on-watch Settings and don’t use Alexa to find out what the weather will be like later or to be told a funny joke. 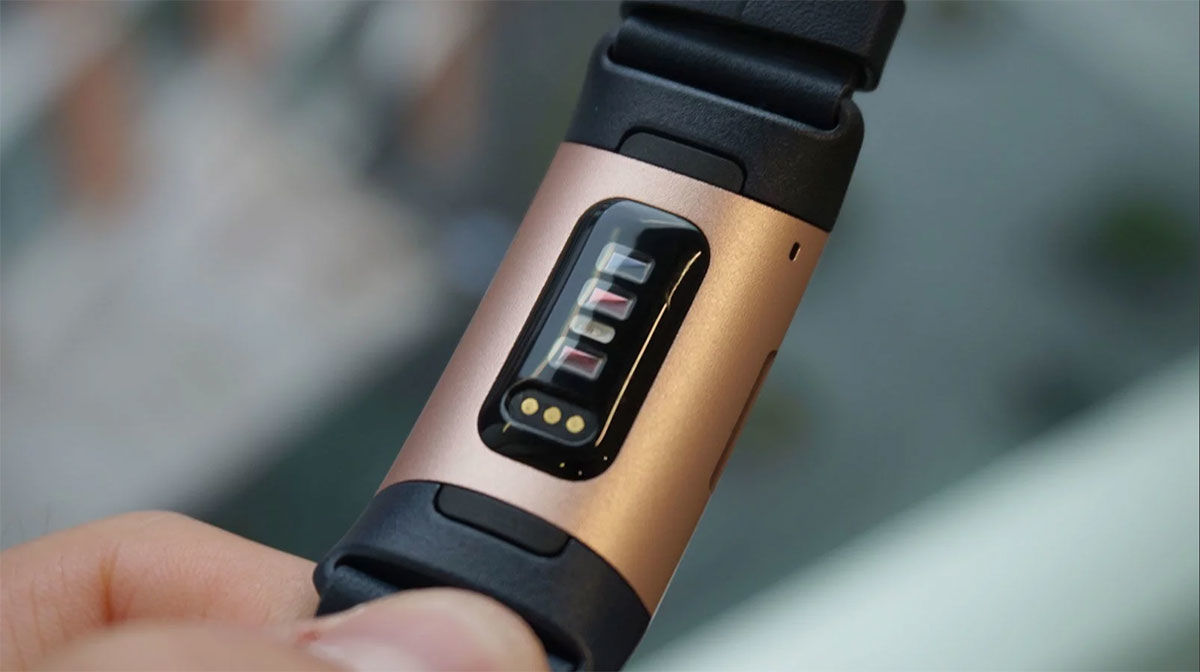 Tip #22: Charge your Fitbit tracker to 100% at least once every six months. For the Versa and Ionic, this can be once every year.

Tip #24: Charge using a higher-wattage wall charger. We haven’t checked this yet, but an 18W charger should theoretically charge faster than a 5W charger. Or try your laptop’s USB wall charger, which could be up to 90W.

Tip #25: If you lost all your steps because your Fitbit battery died, don’t completely despair. Firstly, you still got the exercise, right. You aren’t any less healthy because the steps weren’t recorded. But, of course, it’s so frustrating! And there is a way to manually log your steps in Fitbit.

You can add the number of steps you think you did by using the desktop Fitbit dashboard. You can’t manually log steps via the Fitbit mobile app. And these logged steps won’t count in your weekly total or on any Challenges you are signed up for – come on, it’s not for cheats!

5. Change Distance from Miles or Kilometres to Steps. 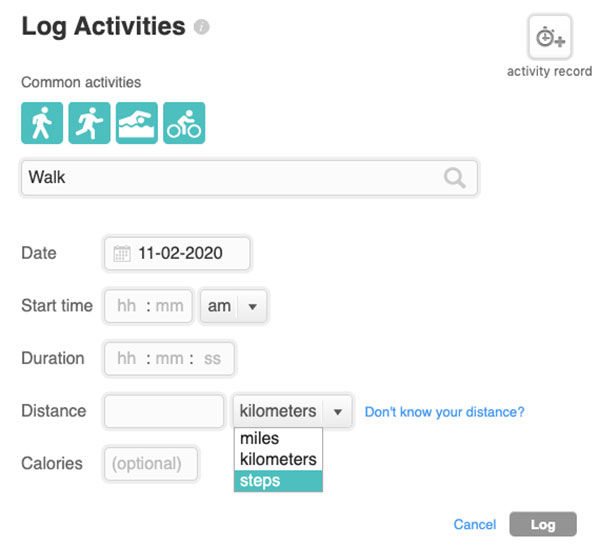